Today was our special event to celebrate the 75th anniversary of the MNA. A packed coach explored sites in north Wales and Anglesey led by the guides Alan Davies and Ruth Miller, noted for their global bird trek “The Biggest Twitch.” We met the pair at the RSPB reserve at Conwy and took a short walk through the reedbed where Greenfinches called their nasal wheezy notes from a tree, a Wren burst into song from deep in scrub, a Chiffchaff was calling from some willows and both Reed and Sedge Warblers burst into song  from the reeds – the Reed Warbler repeating the same phrase never stopping for breath whereas the Sedge Warbler song is more stuttering as it stops and changes phrases. A few spring flowers were blooming with Alexanders Smyrnium olusatrum, Lesser Celandine Ficaria verna, Bluebell Hyacinthoides non-scripta, Lady’s Smock a.k.a. Cuckoo Flower Cardamine pratensis, garden cultivars of Narcissus and a bank-side covered in Cowslips Primula veris. An unusual fungi find was a desiccated Stinkhorn Phallus impudicus. 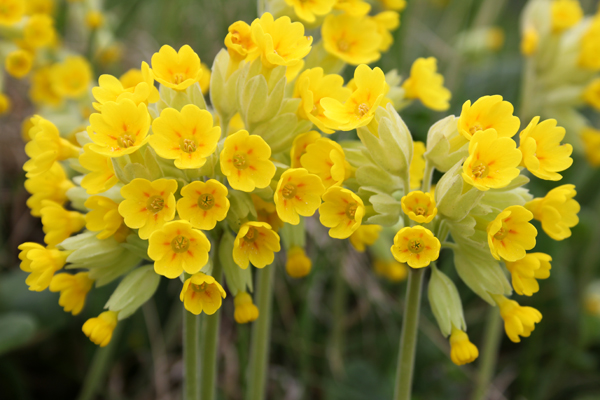 We reached Tal-y-Fan hide giving good views over both the pools. Lapwings were nesting – their chicks are a favourite on the menu of the local Herring and Lesser Black Backed Gulls. Great Crested Grebe, Grey Heron, Shelduck, Canada Goose, Mute Swan, Gadwall, Mallard, Tufted Duck, Red-breasted Merganser female and Coot were all viewed. A Buzzard was circling on the far side of the marsh. Swallows, Sand and House Martins were skimming over the reedbeds and ponds and a handful of Swifts zoomed through on their scythe-shaped wings. 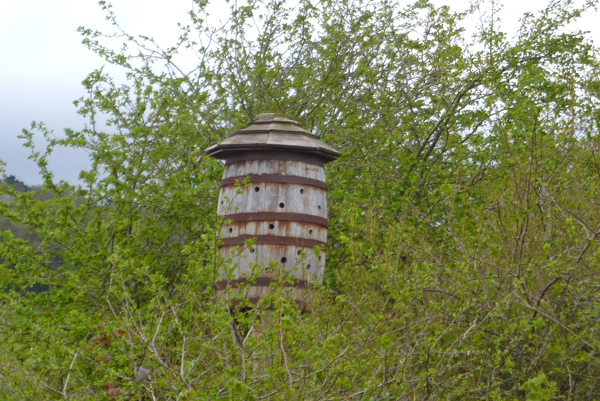 We drove along the coast heading towards Anglesey, the landscape splodged in yellow from the masses of Gorse bushes Ulex europaeus in flower. Bit of birding en route with three Greylag Geese performing a synchronised fly past, a couple of hovering Kestrels and a Sparrowhawk just as we crossed over the Britannia Bridge onto Anglesey. 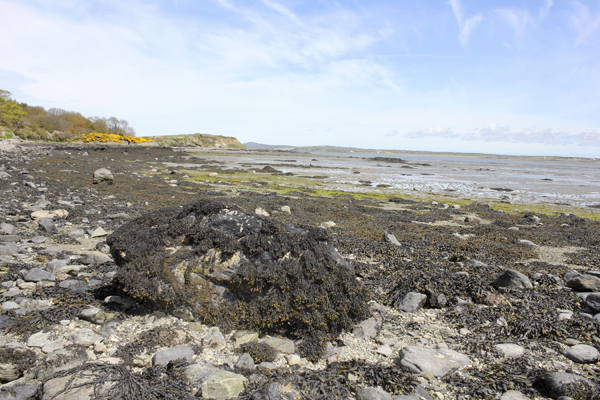 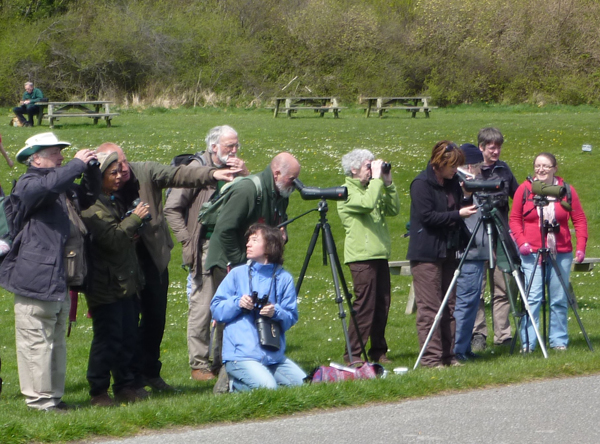 We stopped for lunch at Arfordirol Penrhos CP, BeddmanarchBay. The tide was out so only distant views of Shelduck, Oystercatcher, Curlew and Black-tailed Godwit on the water’s edge. I had a quick root around in the seaweed and rocks on the edge of the mudflats – molluscs included Common Limpet Patella vulgata, Common Periwinkle Littorina littorea, Flat Periwinkle Littorina obtustata, Grey Top Shell Gibbula cinerea, and Dog Whelk Nucella lapillus. Polychaetes included the pyramid mud casts of Blow Lugworm Arenicola marina and groups of Sand Mason Worms Lanice conchilega with their sand covered feeding tentacles. 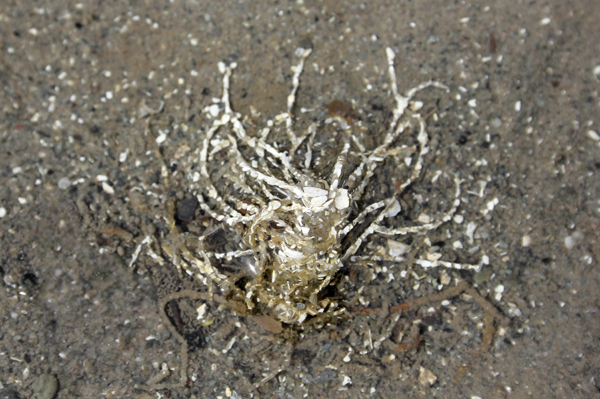 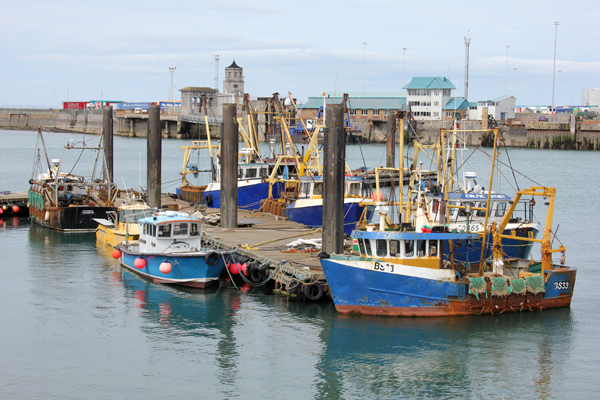 Negotiating a small side road in Holyhead brought us to the old fishing harbour. Star bird was the Black Guillemot in summer plumage. Anglesey is the southerly limit for this species and it nests in holes in the harbour wall – a BTO guy could be seen on a ladder checking the nest sites. On a concrete structure off from the harbour wall Cormorants were joined by a Shag and a couple of Common Guillemots were bobbing around on the sea. A Raven croaked overhead and landed on the roof of a dilapidated building where it was joined by its mate – possibly nesting there. 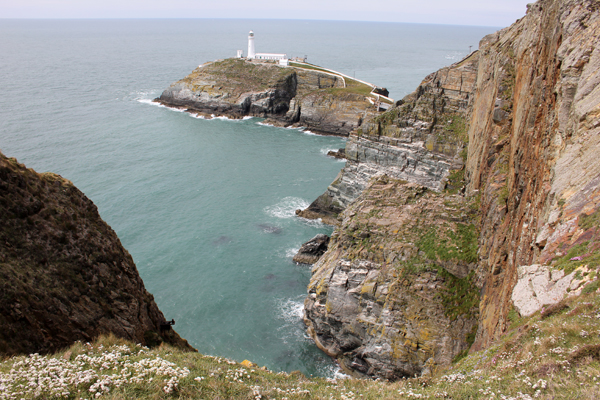 A group of Jackdaws were wandering around a field and Meadow Pipits and Wheatears were perched on top of the stone walls as we approached South Stack RSPB Reserve. Blustery conditions prevailed so there was quick donning of jackets and woolly hats. We climbed down the stone steps and watched a male Stonechat flitting around the gorse. Peering over to look at the cliffs the lack of the usual lines of nesting auks was very apparent. This delayed arrival of spring must have kept the Common Guillemots and Razorbills out at sea. 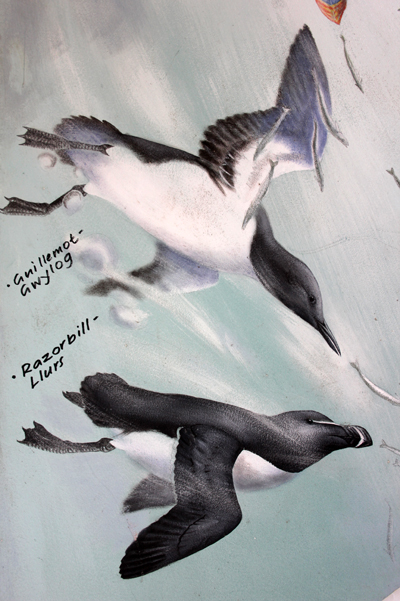 There was still plenty of commotion though with nesting Herring Gulls, the odd pair of Lesser Black Backed Gulls, Kittewakes with their all black wing tips, Fulmars gliding by on stiff wings to land with their partners, a pair of Puffins bobbing around on the water in the bay in front of Lighthouse Island, Chough riding the wind with dangling red legs calling their name as they glided by, a couple of croaky Raven flying around the cliffs and a couple of Rock Pipits hopping around the rocks. Out at sea the odd Razorbill, Common Guillemot and a couple of distant young Gannets flew by, an adult Gannet was bobbing on the sea and small groups of Manx Shearwaters flew past the lighthouse occasionally flipping over to expose their white underbellies. Chris Butterworth heard the cry of a Peregrine. 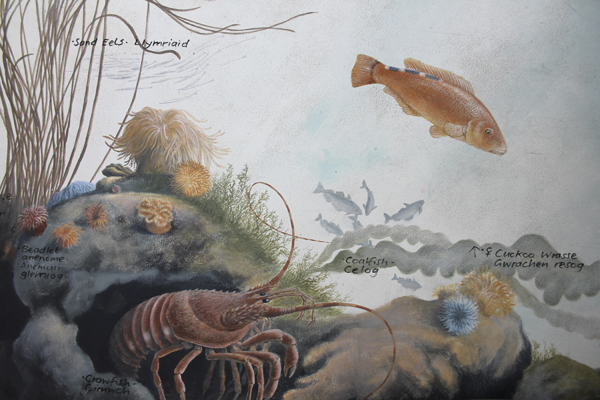 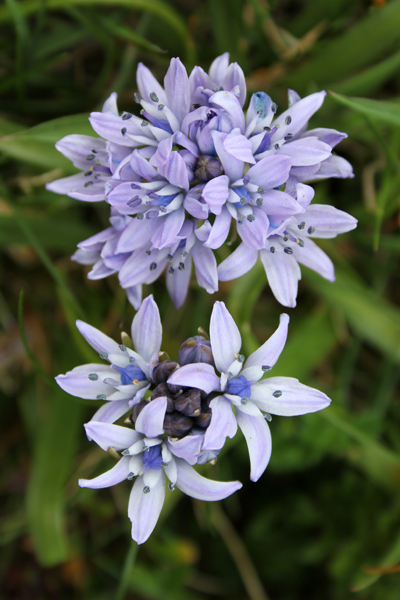 On a previous visit I walked down to the bottom of the steps where you can cross to Lighthouse Island. Here there were great views of the cliffs which display some of the most magnificent exposures of folded rocks in Britain. These date back nearly 600 million years to the Precambrian. The layering of different materials making up the rocks is clearly visible. The sandstone and mudstone layers have acted differently as they’ve been folded: sandstone contains coarser materials and keeps its shape whereas the mudstone is more fluid and has been squashed into the gaps in-between. 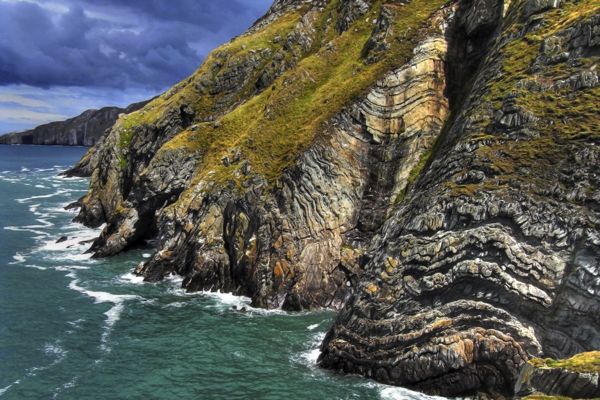 We’d seen most of what we’d expect here so the group members were rounded up for the short drive to our last stop of the day – the lake beside the RAF base at Valley in Anglesey. A helicopter circled overhead as we scanned the lake noting Great Crested Grebe, a few Greylag Goose, Gadwall flying around, a small group of Pochard, Tufted Duck, a female Goldeneye, two Red-breasted Mergansers and Lesser Black Backed Gulls. A Willow Warbler, Wren and House Sparrow were in the bushes at the edge of the lake.

We boarded the coach again dropping off our guides back at Conwy RSPB reserve and thanking them for our mini twitch around their local sites.