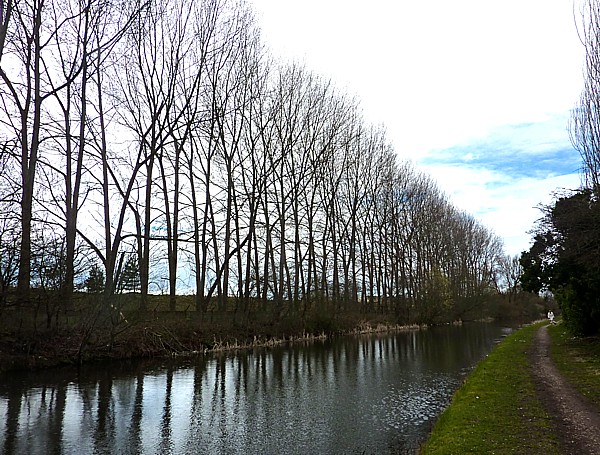 We took the X2 bus to Bridge Road, Seaforth and headed for Old Roan. It was an overcast and windy day, with one rain shower in mid-morning, but much warmer at last.  We saw the normal denizens of the canal – the Moorhens, Coots, Mallards and Canada Geese, but also Herring Gulls, which were calling overhead. In the hedgerows we heard a Chiffchaff, Blackbirds were trilling sweetly and House Sparrows tweeted. We also saw Wood Pigeon, Crow, Robin, Magpie and Collared Dove. Very few trees were in leaf, with only the Hawthorn showing definite green. There aren’t many flowers yet either, just Coltsfoot, Lesser Celandine and a few Dandelions, with clumps of Bluebells coming through, not yet in flower. On the far side of the canal there were outbreaks of daffodils and narcissus, looking like someone had chucked a few handfuls of bulbs over their back fence. 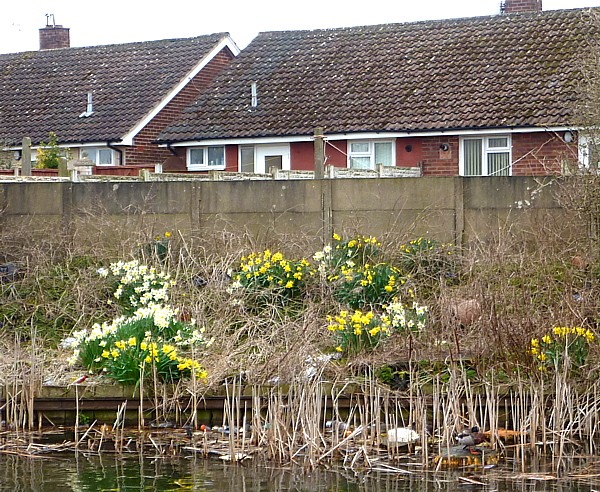 One interesting tree was a Common Larch, with male and female flowers showing. The female flower is a lovely upright red burst, less than an inch tall, while the male flowers are the brown down-pointing globules. 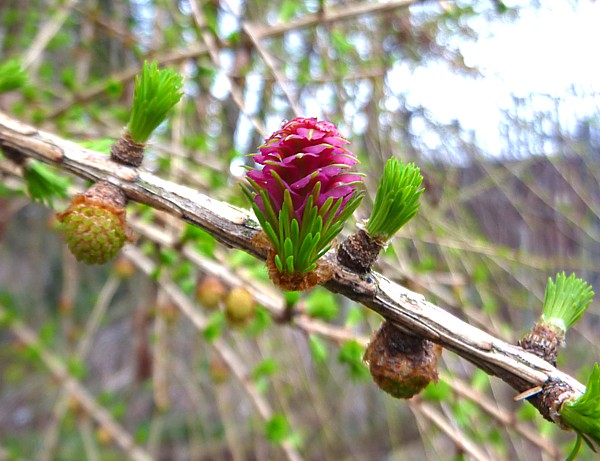 On the grassy edges we noticed lots of holes or burrows. The one on the left in this picture was about 1½ to 2 inches in diameter (4-5 cm) and at least 14 inches (35 cm) deep, sloping steeply downwards towards the water. Could they have been made by Water Voles? 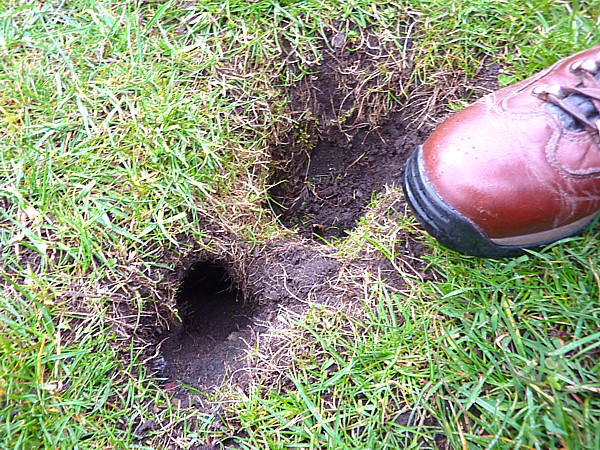 Further on was a ruined artwork, a pile of steel stars with plants etched on them  Oddly, there was a trunkless white elephant perched on top. It seems it was once a sculpture called “Carrying Star”, put up in 2007, and the star panels were originally mounted on a framework. It  referred to the historical planting of “star grass” (Marram grass) on the dunes by the Lords of the Manor of Sefton in the 18th century. People used to collect it secretly to thatch roofs and make furniture. Peasants caught stealing the Lord’s grass (accused of “carrying star”) faced harsh punishments.  A passer-by told us there used to be a sign about it, but it has been vandalised. And as for the elephant, he was added to the stack of stars by the person who lived in the adjoining house. He dropped it in the process, and the trunk broke off. 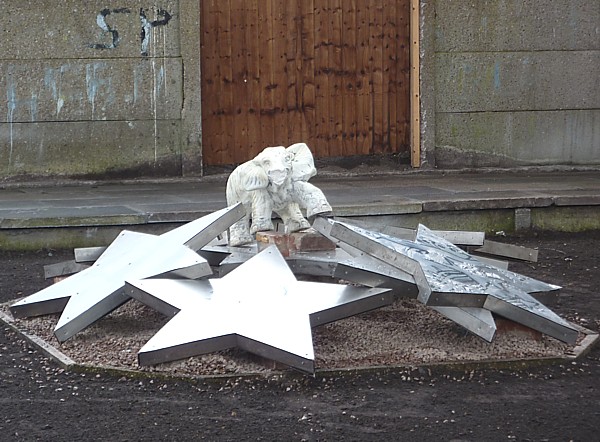 On the path was a pair of mating toads (“in amplexus”) with the smaller male gripping the back of the larger female. They were on their way from the undergrowth to the canal to mate but the male had grabbed the female well before she got to the water. Further along there was a different pair which retreated back to the hedge and further again still was a solitary male, dead in the middle of the path, perhaps run over by a bike. 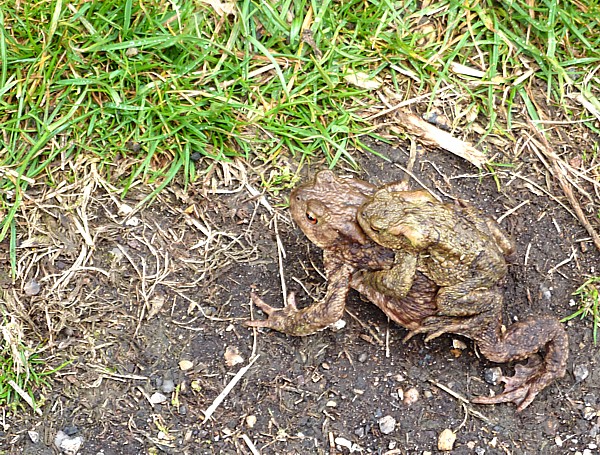 The first ducklings of the year were a brood of just three tiny ones, pottering about with both parents near Cookson’s Bridge pub. 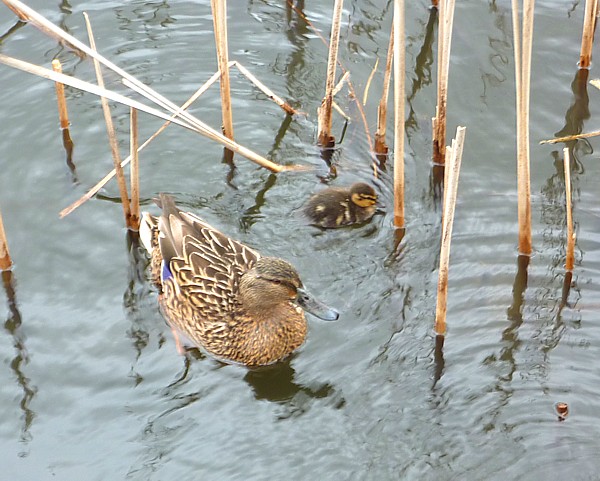 The mortality of baby Mallards must be very high on the canal. A fisherman just before the Swift’s Lane bridge told us he’d had a 3lb Pike that morning, about two feet long, and he’d previously caught one of 13lb in that same spot. He proudly showed me a picture of it on his smartphone. They must feast on all the ducklings in the spring.

The sun came out after lunch and we saw our first Bumble Bee this year. Past Fleetwood’s Bridge was a male Mute Swan, which we checked for leg rings (none). A lady on the towpath said he’s a very good natured lad, used to being fed, and has been known to poke her with his beak when he wants bread. His mate was on a nest a bit further on, near the Swing Bridge, sharing the bank with a dumped mattress. 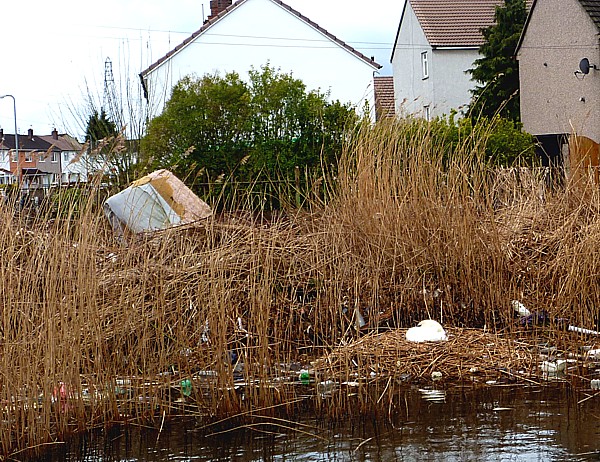 Just before Old Roan was another milestone showing Liverpool 8, Leeds 119¼ . 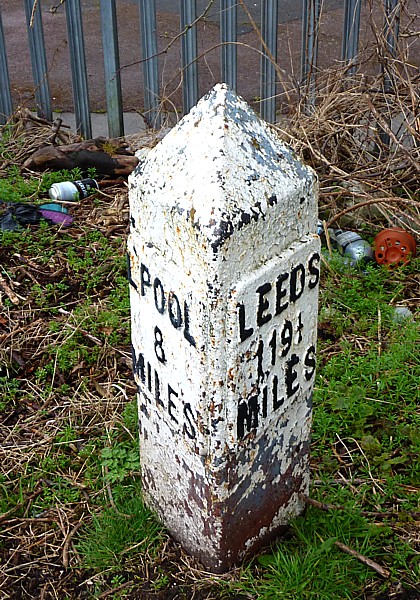 If you are interested in the wildlife of the North-west of England and would like to join the walks and coach trips run by the Merseyside Naturalists’ Association, see the main MNA website  for details of our programme and how to join us.