At this time of year, the focus of mycological interest turns to bracket and crust fungi that are to be found growing from trees and inhabiting the underside of fallen trunks and branches. Because the physical differences of many of these species of fungi are very slight, it is essential to examine their spores to be able to identify them. Now is when they produce their spores. This is why you should never prune plum trees in winter because of the prevalence of the spores of Chondrostereum purpureum (Silver Leaf Fungus).

Taking advantage of a lull in the persistent rain, I went for a walk around the area comprising Clarke Gardens and The Eric Hardy Reserve in south Liverpool.  A particular venerable yew tree has been supporting a large expanse of a fungus that I had been unable to identify despite taking regular samples over the past year. This time I had success as it had decided to shed its spores. It turned out to be one of the most common fungi, Schizopora paradoxa (Split Porecrust). However, this is highly unusual as there is only one previous record, on the National Database, of this fungus growing on yew. 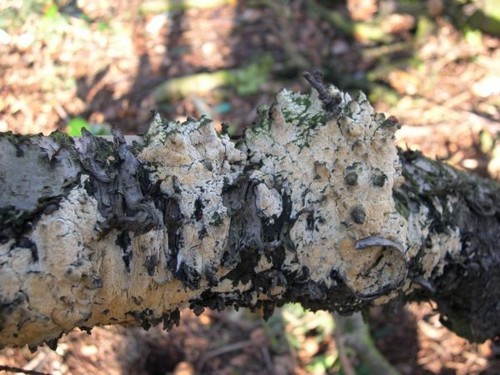 Interestingly, earlier in the year, this same tree produced another fungus, Nectria coccinea (a form of Coral Spot). Again, only one previous record on this substrate. 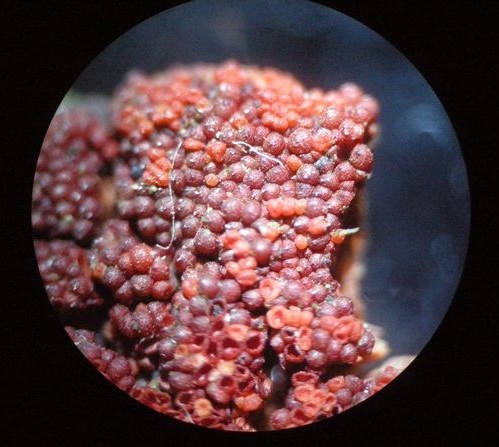 I proceeded further to the lower level of The Eric Hardy Reserve. This was a morass as the stream had obviously overflowed. The mud was over ankle deep and two recently fallen trees made negotiating the path very difficult.  Some gilled fungi were present. Large quantities of Flammulina velutipes (Velvet Shank), a common winter fungus that happily survives frost, were growing from a number of tree sections. It is said to be edible but very slimy and uninteresting. The highly edible enokitake mushroom is a cultivar of this and is found in Asian grocery stores. 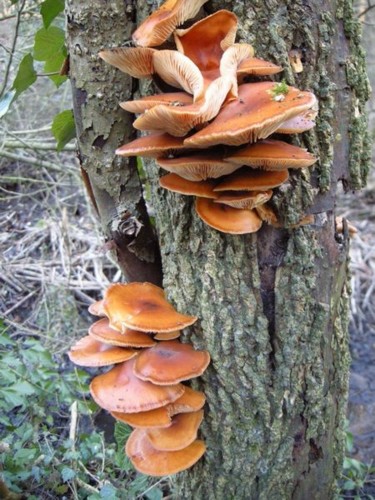 I then spotted two small purple specimens, growing under the protection of a large log. My immediate thought was that they were young Lepista nuda (Wood Blewit) another common winter fungus. But there was something about them (jizz) that made me take them for further examination. It turned out to be a good decision because, under the microscope, the spores were those of an Inocybe, the only purple one I know being Inocybe geophylla var. lilacina (Lilac Fibrecap). This is a common enough species but had me fooled because it lacked the typical pointed cap of the genus. This species is poisonous as it contains muscarine. It has been mistaken for the edible Laccaria amethystina (Amethyst Deceiver). I originally thought it was the edible Wood Blewit. This highlights the difficulties and dangers of identifying fungi purely from their physical appearance. 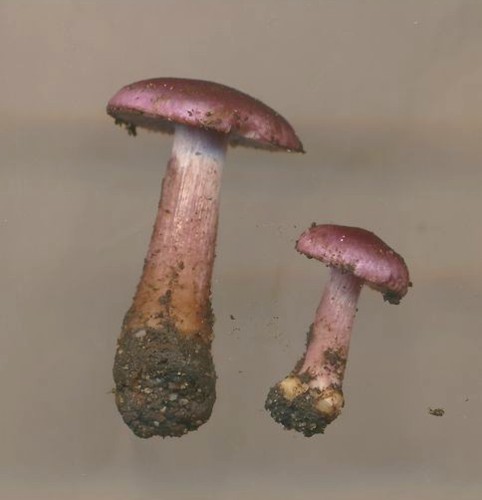 Extracting myself from the mud, I returned home with a couple of crust fungi for further examination. I am still struggling with them. I have extracted all the necessary microscopic information but I may lack the literature to successfully identify them. A good excuse to buy myself a Christmas present?