Despite the rain, suitably dressed, I ventured out to Allerton Golf Course on Christmas Eve. The course was closed for play, allowing me to wander without the danger of avoiding flying golf balls. Two interesting fungi species turned up.

The first was Psilocybe cyanescens (Blueleg Brownie). This was an uncommon fungus until woodchip became popular. It can now be found, sometimes in large numbers, where woodchip or sawdust has been used, also on timber that has been used for edging lawns. Some grow regularly in my greenhouse. This one was on the ground beside a tree stump, presumably existing on the bits left after the tree was cut down.  It is a very nondescript species until it is touched or rubbed and then it turns blue. This because it contains the psychedelic drug psilocin (and psilocybin). It is a criminal offence to be in possession of this fungus (I may have to turn myself in). 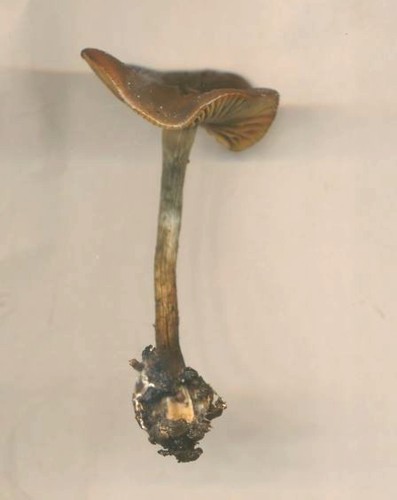 Many of the common small brown fungi that grow on lawns and in fields contain psilocin and are similarly illegal. As it is impossible to identify them without a microscope, I have never understood how these laws are enforced. I have to take them home before I can tell what they are, so it is not obvious that you have committed a crime until it is too late. 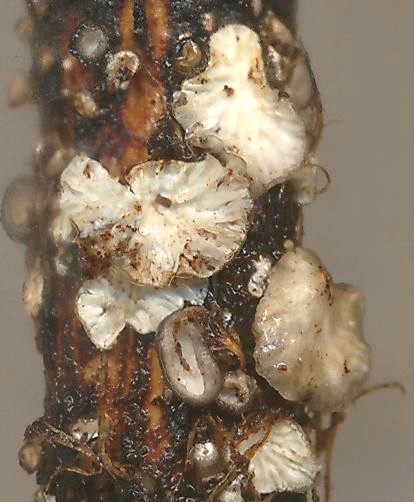 The second specimen, totally new to me, was Hohenbuehelia cyphelliformis. A bit of a mouthful, being named after an Austrian naturalist, Ludwig Samuel Joseph David Alexander von Hohenbühel Heufler. This tiny fungus is only 5mm in size, so I was lucky to spot it. It is occasionally found in southern England, so is probably a first for VC59 (the Vice-county of South Lancashire, between the Mersey and the Ribble). The very interesting thing about this find is that it was on a small branch that had fallen from a Monkey Puzzle Tree, Araucaria aruacana, that grows beside the old hall (now the clubhouse). The literature says that it is always on broadleaf wood. Auracaria is most definitely coniferous, sporting some of the largest cones of all. Any fungus growing on a Monkey Puzzle Tree is an oddity. It is being dried so that it can be sent to the collection at Kew Herbarium.