John Clegg spotted some colour-ringed coots at Southport Marine Lake on Saturday 5th February 2011 and asked me to look them up and report them. 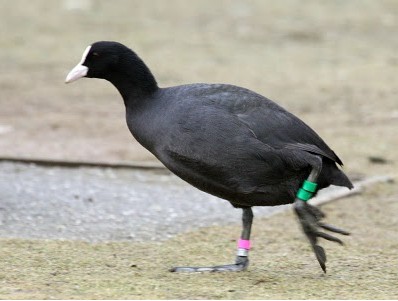 They are part of a project by the Loghan Hurst Ringing Group which is studying the movements of coots, mainly in Merseyside, Greater Manchester, Lancashire and the Lake District.  It started in September 2009 and over 500 birds have been ringed at Southport alone.
The ringing pattern is
Right leg  1 colour ring above a BTO metal ring
Left leg  two colour rings, one above the other (and you should note which colour is above the other).
The colours in use are white, black, red, yellow, orange, dark blue, light blue, green and purple.

Of the six ringed birds John saw, two appear to have lost a ring and so were unidentifiable. The third and fourth were ringed at Southport Marine Lake last November and December and seem to have stayed there. The fifth was an adult, ringed at Southport last November, and who made a trip to Martin Mere and back in January. The sixth was ringed as a juvenile at Southport at Christmas 2009, and may have spent last summer at Stanley Park, Blackpool (sighted there in February 2010, back at Southport in November 2010).

The picture above is the star bird of the study, who was photographed in Cornwall on 28th December 2010 just 26 days after being ringed at Southport Marine Lake!

If you see a colour-ringed coot report it at the Euring site or directly to the co-ordinator Kane Brides at kanebrides (at) gmail.com
More information is on Kane’s blog. It’s worth a look.