This was the mystery destination that John had been planning for a while. It turned out to be in Birkdale. The trip appeared to be ill-fated almost before we got under way. The trains from Central Station were disrupted so the 10.23 to Southport didn’t leave Central until 10.35, and we arrived at 11.20, just after the departure of the hourly bus we wanted. We decided to have an early lunch.
In the freezing sunshine we sat in the shelter by Marine Lake. Most of it was frozen, but on the few areas of free water there were Canada Geese, Greylag Geese, Black-headed Gulls, Lesser Black-backed Gulls, Common Gulls, Moorhens, Mute Swans and one Black-tailed Godwit. 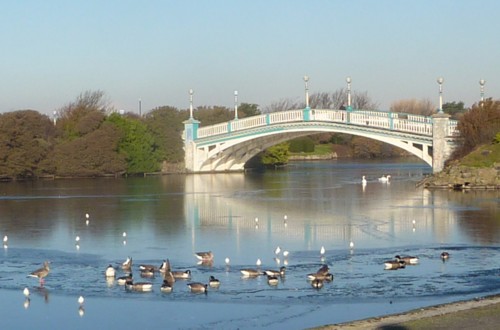 The ice wasn’t thick, and we watched some Canada Geese come in to land, sliding for a few feet on the ice before breaking through.
We took the 44D bus at 12.18 from Eastbank Street and were at the Town Lane Forestry Commission site in about 10 minutes. Not many trees, just an area of open grassland with a gravel path through it, but some Skylarks flew up, there were Crows and Magpies about and a Snipe flew out from the shrubbery. Just as we approached Dobbies Garden Centre a Sparrowhawk zoomed low past us and vanished.
We spent a happy half hour inside Dobbies, getting warm and looking at the tropical fish and reptiles. As we were waiting on Town Lane Kew for the bus back into Southport, several skeins of Pink-footed Geese flew south over our heads, 200 or more, perhaps heading for Marshside.
We got the 3 o’clock train back to Liverpool, and on the fields between Hightown and Hall Road we saw a Curlew, a few dozen Pinkies and some Golden Plover.  Not bad for a day that looked like a disaster when we started!
Here is Dobbies festive band.  Happy Christmas to all! 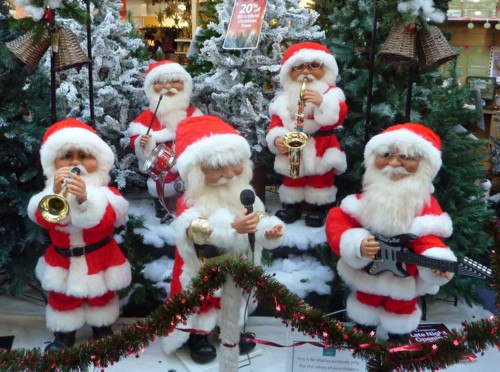