What a contrast to last week! We had a glorious sunny boat trip on the canal from Haskayne to Burscough on the barge “Pride of Sefton”.
Twelve of us met at 10.10 am on 10/10/10 (which had to be a good omen) for the 300 bus from Sir Thomas Street to the King’s Arms at Haskayne. We were escorted aboard, then setted down in the bow to drift happily northwards watching the wildlife. There were the usual Mallards, Coots, Moorhens and Black-headed gulls, and we saw two Herons on the banks, one of which flew ahead in short stretches, only to be disturbed again by our progress. Yellowhammers, Robins, Blackbirds and Goldfinches flitted across the canal, a Buzzard flew high in the blue sky, Crows flocked into an isolated tree and a Kingfisher disappeared into the reeds somewhere past Heaton’s Bridge. 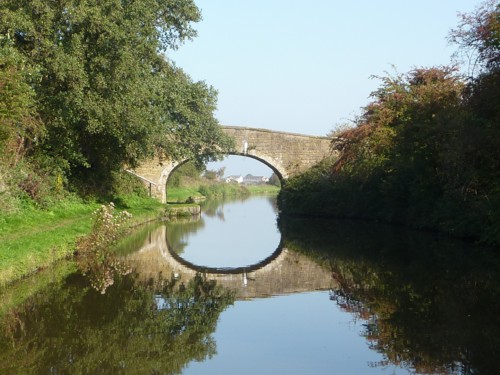 For long stretches we meandered along with the canal to ourselves, passing only a very few walkers and fishermen and hardly any other narrowboats. The leaves on the trees had not yet started to turn, but the hedges were red with Hawthorn and Rowan berries, rose hips and apples. We spotted one white butterfly and several dark ones: one at least was a Red Admiral.
We turned near Burscough, right in the middle of a fishing competition, and had a chance to take a second look at three garden Peacocks (the birds not the butterflies); one was the white or leucistic variety. The skipper took us further south on the return journey, where we saw a most unexpected brood of seven Mallard ducklings, only a day or two old. Not only were their parents breeding very late (or early), they had a very mixed ancestry. Two ducklings were very dark brown, two were lighter brown, two were butter-blonde while the seventh was fawny-grey with dark flecks.  We disembarked at the Scarisbrick Arms at Downholland Cross at 4pm and caught the 300 bus back to Liverpool, due back in the City Centre at 5.15.