We met at Lime Street station for the 10.26 train to Widnes, then walked just a few yards along Birchfield Road to the park. It was a perfect autumn day, with a clear sky and crispy leaves underfoot. 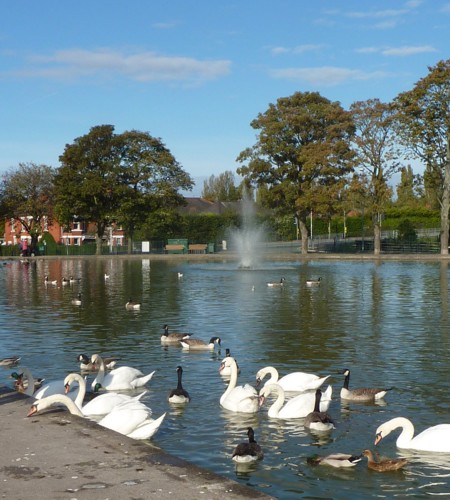 The pond was full of Mallards and Canada Geese, well-trained to bread, with some Black-headed gulls, one Moorhen and about 14 Mute Swans. None appeared to be this year’s cygnets (they were fully white) but they all looked like females, lacking the prominent black forehead knob of the mature cob. They may have been second-autumn juveniles.
The park was full of visitor-friendly features  a bandstand, a café, exercise machines, a BMX park and a climbing wall. The glasshouses had bedding plants for sale, two caged iguanas and a rather disappointing butterfly house. Near the Gladstone Memorial Fountain was an old milestone showing damage from a Zeppelin bombing raid in 1918. 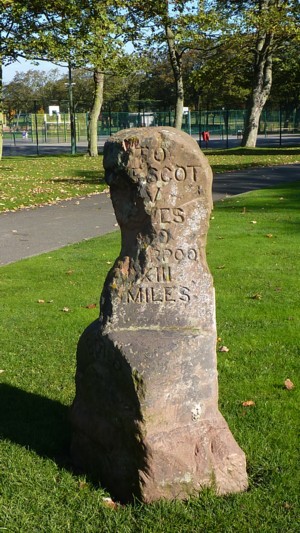 The wooded area on the west side of the park is the “nature” area, where we saw Long-tailed Tits, Great Tits, a squirrel and a Collared Dove in the trees. The wardens have put up bird and bat boxes and made a “Bug Hotel”. It must have been working because we saw what we thought at the time were three different Ladybirds in the area. The first one is the native 7-spot ladybird, but the other two are probably both Harlequins, which are very variable.

Something we have never seen before is a bat hibernaculum. The adjacent signage said there are Common Pipistrelles, Soprano Pipistelles and Daubenton’s in the area, who may spend the winter in their newly-built home. 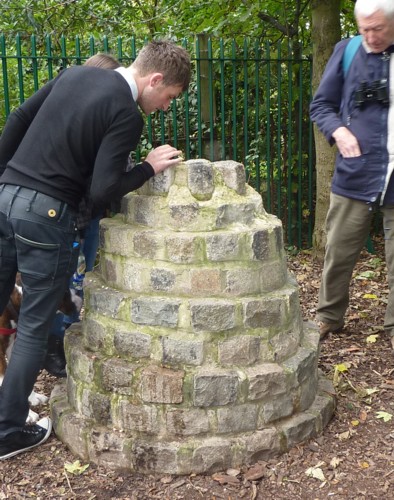 On the way back across the field we saw a Magpie and three Pied Wagtails on the grass. We caught the 2.15 train back to Lime Street, arriving just before 3pm.