House Sparrows chirped at us from the shrubs outside Wallasey Grove Road Station, and we headed down Groveland Road, Newport Avenue and Bayswater Road to King’s Parade and the New Brighton seafront at Harrison Drive. It was blowy even there, and on the last bit of sheltered grass before the seafront, various gulls, Starlings and Oystercatchers were sheltering. At Kings Parade a strong northwest wind was driving the high tide against the sea wall. 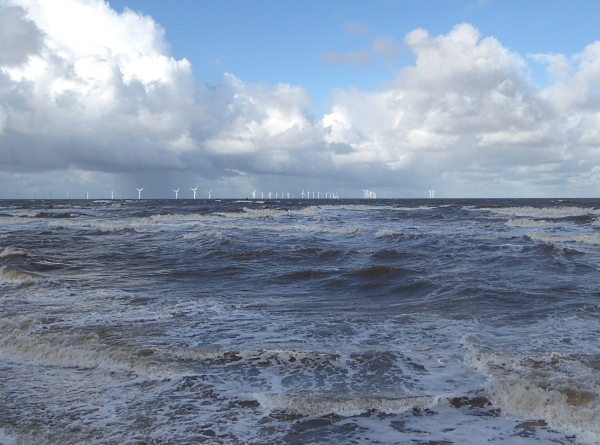 Huge waves and plumes of water were crashing over the edge, throwing gobbets of spume like  blobs of raw meringue to the far side of the road. It was invigorating, but we didn’t walk on THAT side!

It was more sheltered as we approached the built-up area near Bubbles World of Play, and we spotted a Mute Swan sheltering in a corner of the model boating lake. On the south side of King’s Parade near Atherton Street we looked at a shrub hanging over a wall that appeared to be the Duke of Argyll’s Tea Tree. The flowers were pinker than the one at Marshside, so maybe it was something else. The pontoons behind Bella Italia were full of roosting waders. They were mostly Redshanks, but at the edges of the tight flock were Turnstones, Purple Sandpipers, and Dunlins with their black legs. Near the corner was a single winter-plumaged Knot. You don’t often see one of them on its own! Our usual lunch seats in a seaside shelter were cordoned off while gangs of workers stacked up speakers for this evening’s “River of Light” fireworks display. We found seats in Marine Park. Then we strolled along the riverside, south of Fort Perch Rock, where it was less windy. New Brighton have joined the “sculpture trail” fashion, choosing a mermaid as their emblem. There are six of them, variously painted, and a storyboard about a young sailor who lost his heart. We went as far as the children’s driftwood pirate ship, the Black Pearl, then up to New Brighton Station for the train.