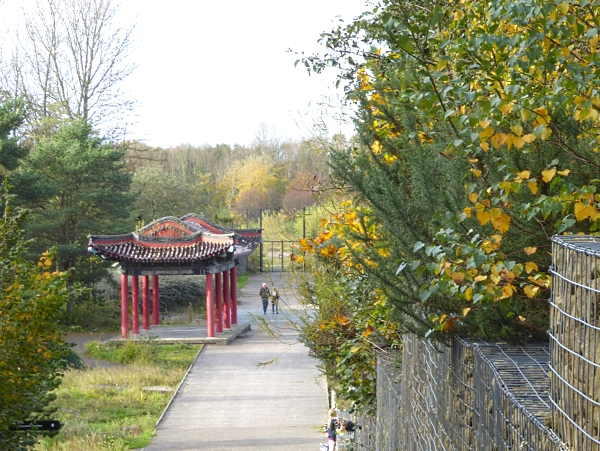 What a gorgeous day for late October!  Bright and sunny, with only a slightly chilly northerly breeze. The Festival Gardens are the remaining portion of the old Garden Festival from 1984. Liverpool Council have a new £700m plan to build on and around the site, but say they will keep the Festival Gardens.

To our surprise there were dozens of young Strawberry trees in the shrubberies. They are a rarity elsewhere, and one of the “special” trees of Birkenhead Park, but they are common in the Festival Gardens. This is the best time of year to see them, when last year’s fruits are turning from yellow to red, while this year’s white bell-like flowers are in bloom. The fruits are said to be unpalatable and the Latin name is Arbutus unedo, “unedo” meaning “You’ll only eat one!!” However, they apparently make good jam and the Portuguese make an alcoholic drink called Medronho from them. 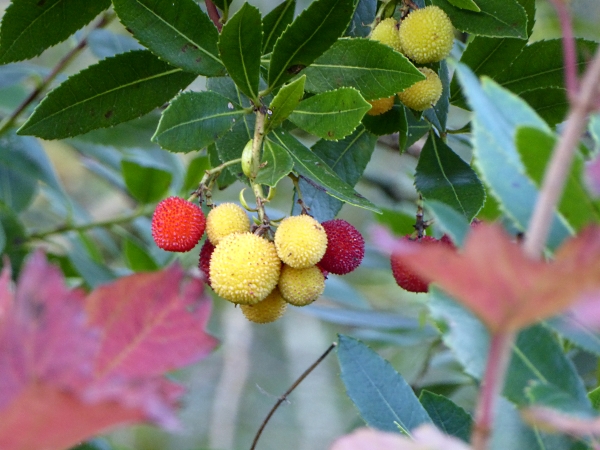 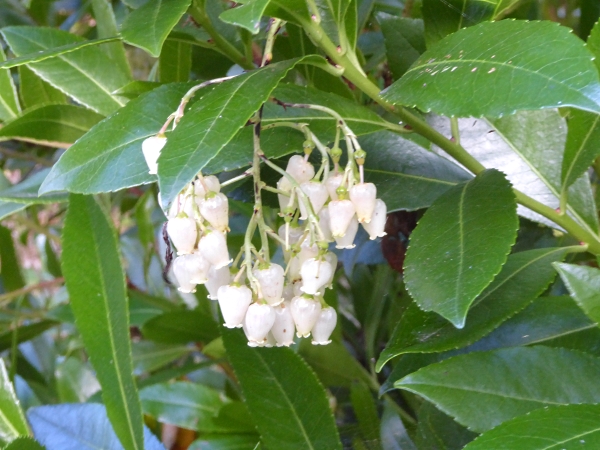 The park is a sheltered, sunny, south-west-facing spot, and there were many flowers still in bloom including Ragwort, Bramble, Meadow Cranesbill, Herb Robert, Daisy, Dandelion, Evening Primrose, Hedge Bindweed and Marjoram. 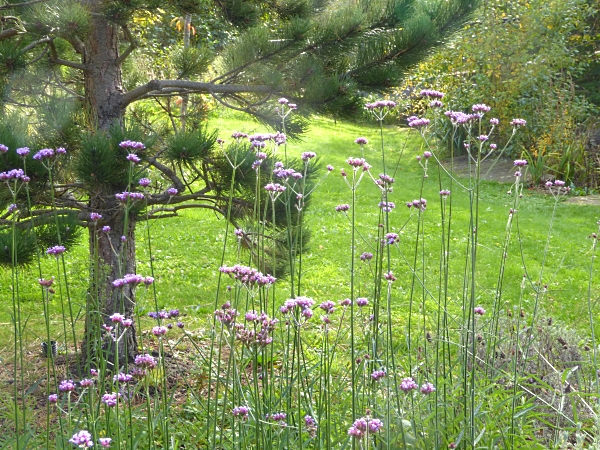 The duck pond had a couple of sleeping Mallards, a Coot and a Moorhen and, oddly, a Heron up a tree. 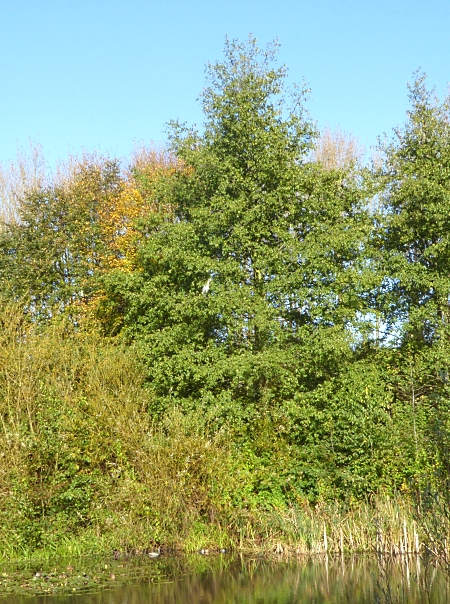 On a lawn was one pretty little fungus, which I think was the Grisette, Amanita vaginata. 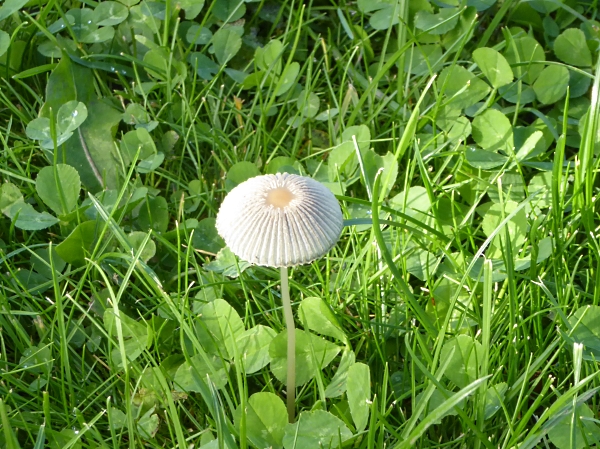 One small Pedunculate Oak tree had just a few Spangle Galls on the underside of the leaves but lots of what I am used to calling Oak Apples, but they are really Marble Galls. (Oak Apples are bigger, up to 4 cm, whereas the Marble Galls are about 1 or 2 cm.) They are caused by the wasp Andricus kollari, and you can see on one of the galls the little hole where the adult wasp has emerged. 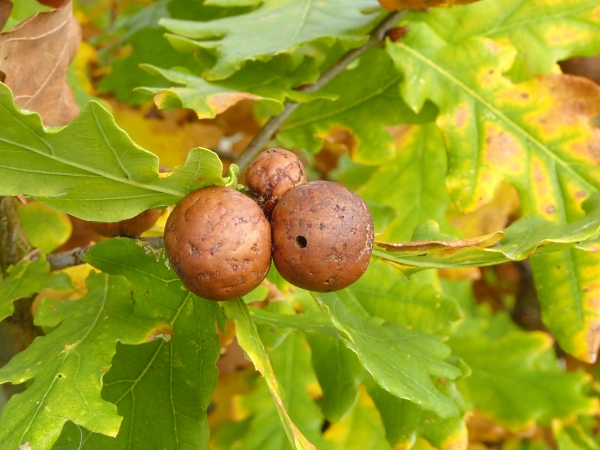 We lunched on the jetty overlooking the main pond. What was probably the same Heron was there, hunting in the water very close by us. 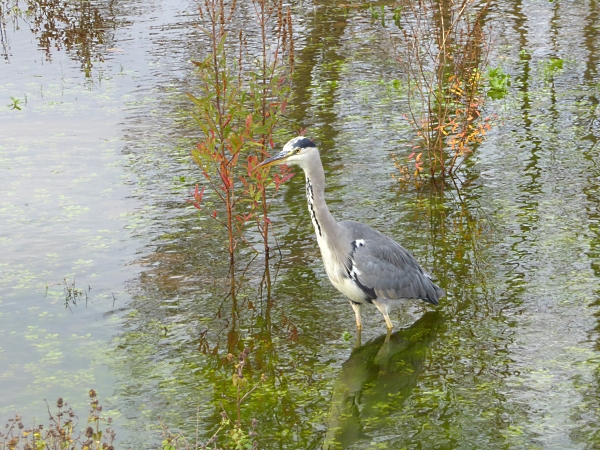 Although we saw it catch a fish, there can’t be many others, because the pond looked pretty barren. Food for all the birds must  be scarce, because we watched a multi-species competitive drama unfold. One of us threw a small piece of bread out and a Mallard cruised over, but the Heron got there first and grabbed the morsel. After the Mallard had left we put some more small scraps of bread in the water but the Heron wasn’t interested in them. The scraps just floated there on the water. However, a Magpie flew slowly over,  clearly interested, but not able to figure out a way to get them.  It pondered the situation from a rock, but that wasn’t near enough. 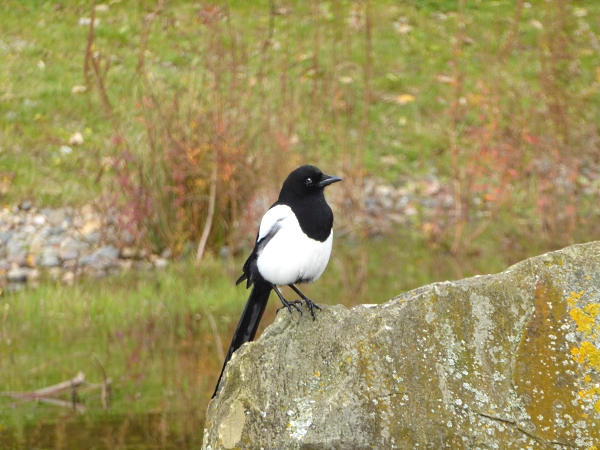 It waded from a small island, but it became too deep. 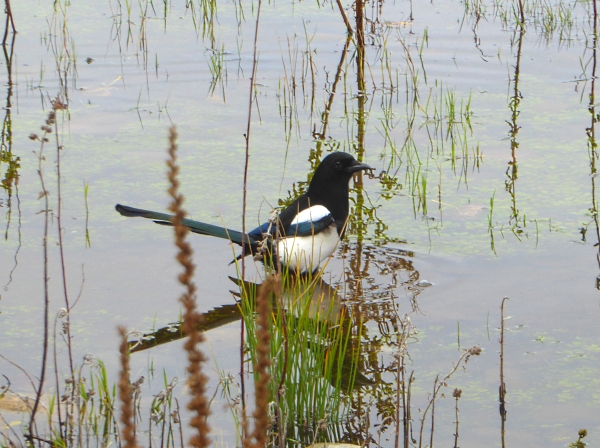 Then it tried landing gingerly on a precarious twig, but that was still too far away, and it eventually gave up, completely frustrated by the out-of-reach bread. Suddenly, over on the other side, it spotted a Moorhen which had found a different, very big piece of bread. The Magpie hurried over but the Moorhen retreated fast and jerkily, with the bread still in its beak, and it hid behind some rocks. Then there was some squawking, and the Magpie emerged with the bread. It flew up with its prize to the top of the waterfall, whereupon the Heron’s interest was revived, and it followed the Magpie up there. We couldn’t see the final outcome, but the big chunk of bread wasn’t seen again.
Meanwhile a Grey Wagtail was pottering along the shallow edge. 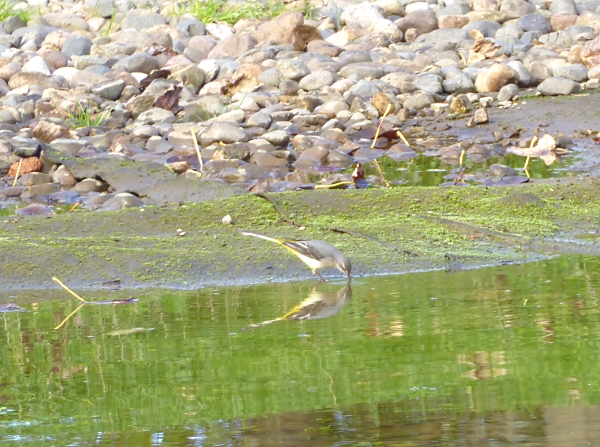 It was warm and sunny enough to tempt some butterflies out, and we saw both Speckled Wood and Red Admiral on the wing. Then we climbed the hill, up through the woods, to the top where there a views over to Moel Fammau. A Buzzard cruised up from the river, and a dragonfly perched helpfully on a piece of old white wood. It was a Common Darter male I think. 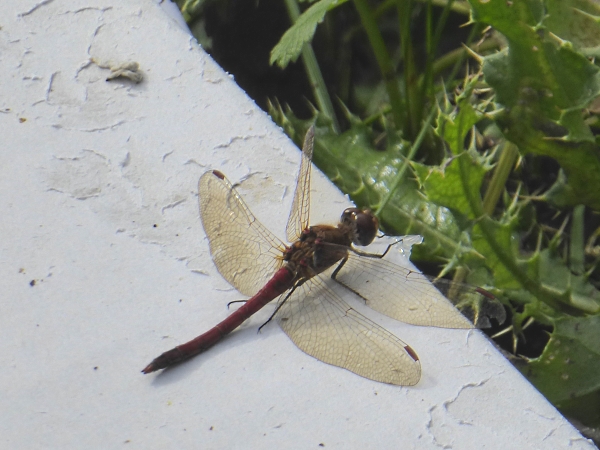 The floor of the woods was clothed in the fern-like new leaves of Cow Parsley. Are they supposed to be out already? Do they think it’s Spring? The wild flower book by Blamey, Fitter and Fitter says the leaves appear in January or even earlier, so it’s not unheard of, but still far too early. It’s a very peculiar autumn for most things. There are hardly any red colours in the leaves, perhaps only in Cherries and Azaleas. The leaves of Birch, Ash, Field Maple, Alder, Willow and Lime are still green and are staying on the trees. There is some yellowing of the leaves of Oak, Norway Maple, Sycamore and Hazel, and only the fallen leaves are brown.
The river was low and the water was like glass. We lingered for a while, hoping to see Harbour Porpoises, Killer Whales or even a Seal or two, but no luck. Then we walked southwards. 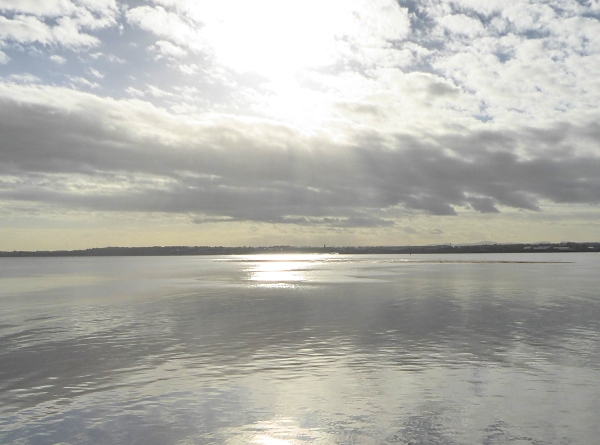 One fisherman said he had caught a Whiting about a foot long which he had put back. The others said they were waiting for the tide to turn when the incoming flood would bring them Cod weighing up to 12lb.

There were more flowers along the riverside path, Yarrow and Common Mallow. At the bottom of Jericho Lane was a tree that looked like Hawthorn, but it had huge Haws, less-indented leaves and two seeds in the fruit. It was probably Midland Hawthorn but the fruits aren’t supposed to be that big! 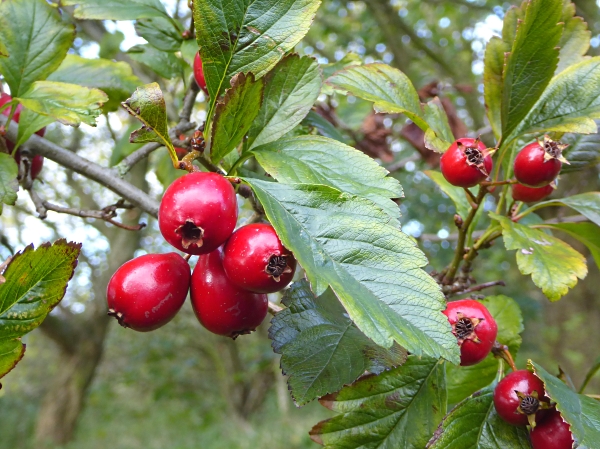 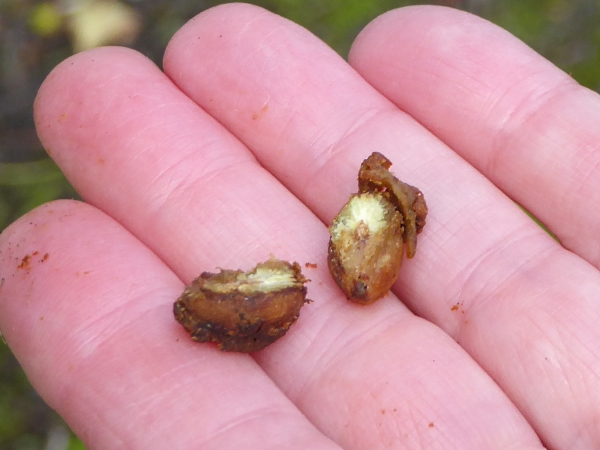 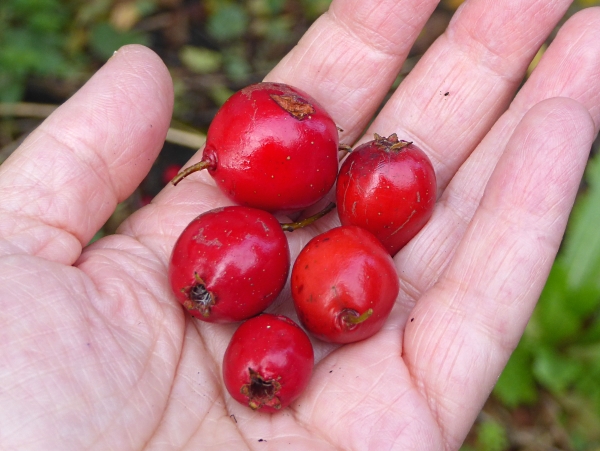 The Otterspool café had dubbed itself the “Ottersghoul Halloween Experience” and was running a Ghost Train for the kids and providing Zombie cocktails for the grownups. We took the lovely wooded path through Otterspool Park, which was once the driveway of a gentry house, so it is lined with interesting trees. Just before the railway bridge was a Persian Ironwood, normally famous for its autumn colour, but today just managing some vaguely orange tips to some yellow leaves. 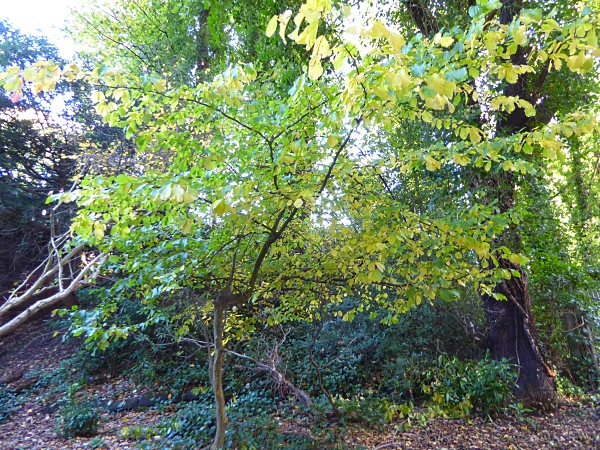 A Hornbeam still bore most of its seed clusters, and we could find only one on the ground beneath. 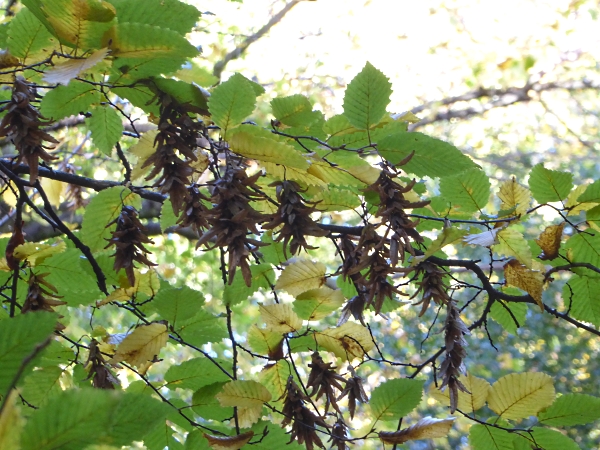 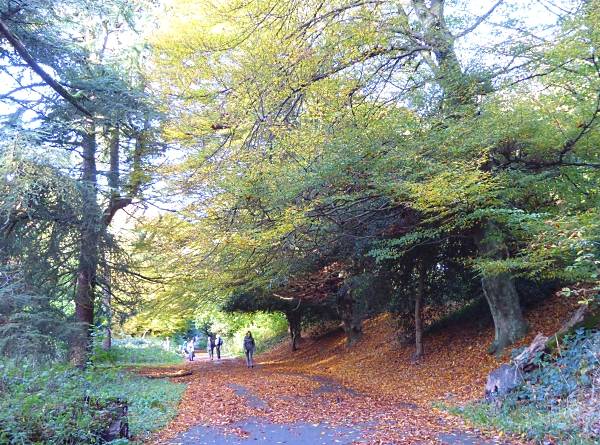 Deep in the woods off the path there was a possible Swamp Cypress with a lovely rusty colour, but it was too far back over boggy ground for me to investigate. There were also some Cedars, tall and scrubby-looking things bearing masses of bright light-green baby cones. The cones of Atlas Cedars are purplish, and the needles of Deodar Cedars are of uneven lengths, so I think these were Cedars of Lebanon, despite not showing the majestic “flat-plane” shapes of trees which grow in open situations. 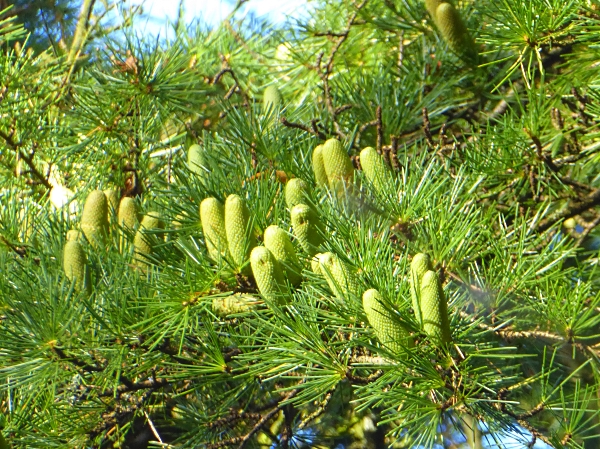 The path through Otterspool Park ends at the corner of Jericho Lane by the gates of the old house. 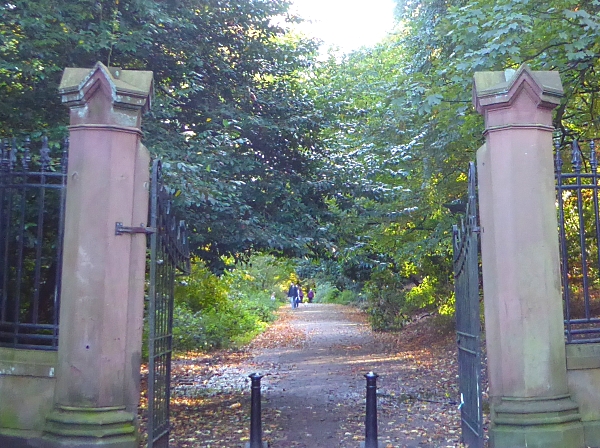 Public transport details: Bus 82A from Liverpool ONE bus station at 10.15, arriving Riverside Drive / St Michael’s Interchange at 10.30. Returned from Aigburth Road / Jericho Lane on the 82 at 2.33, arriving Liverpool ONE at 2.50.