A misty, damp and cold day greeted the first MNA coach trip of 2017 at our favourite winter site – The Mere at Ellesmere, Shropshire. On the small wooded island a Grey Heron was already sittting on one of the nests in the Heronry and on an adjacent tree was a Little Egret. Beside the visitor centre the motley collection of farmyard Geese, Greylags, Canadas, a feral Swan Goose and numerous hydrids of dubious parentage were vociferously begging from the younger visitors and their families. A couple of Mute Swans sported blue darvic rings on their legs with alpha-numeric code 7FDD and 7FIP ringed by the Mid Wales Swan Study Group – a record of these sightings have been forwarded to Martin Grant. He tells me they are a resident pair on The Mere – the female (7FDD) was ringed as a second year in 2008. Large numbers of Coot were also in the water and strutting around in between the Geese with their disproportionately large looking grey webbed feet. A couple of these also wore darvics – white ones with the code AHA and AII – a record of these have been forwarded to Kane Brides’ North-west Coot Project. 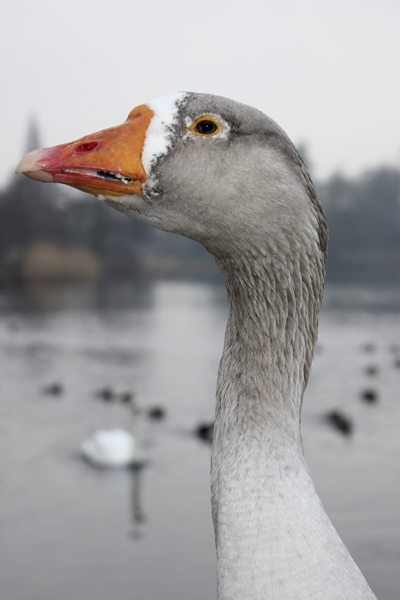 A few Goosanders, Goldeneye and Tufties were on the south end of the Mere, a dozen or so Great Crested Grebes in the main body of water but the majority of the wildfowl were bobbing around the north end with more Goosanders 4m 2f, Goldeneye 6m 1f, Cormorants 30+, Wigeon 72+, Tufties 30+ Mallards along with BHGs plus a Herring and Lesser Black Backed Gull. Small numbers of Blue, Great & Coal Tit, Goldcrest, a few Blackbirds, Song Thrush, Prune, Robin, Wren, Chaffinch and a charm of Goldfinches were noted. Corvids included Jackdaw, Carrion Crow and a Raven overhead. Next to the art installation of a giant Bee, a fallen tree trunk had Smoky Bracket Bjerkandera adjusta and Hairy Stereum Stereum hirsutum. 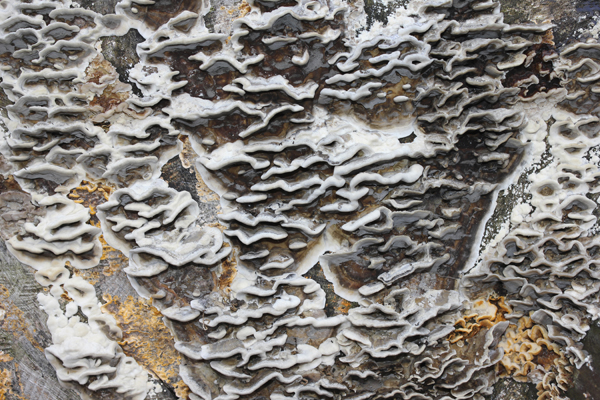 Barbara and co had a double-take when a Labrador passed them carrying a large fish, protruding from both sides of its mouth – probably a Pike. According to its owners it had picked the fish up from one of the small fishing platforms and was exceedingly happy with its find!

After lunch we walked through the Ellesmere Tunnel and along the towpath of the Shropshire Union Canal, a canal boat ‘The Viking’ slowly cruised by. A few feeding flocks of Blue and Great Tits along with Goldfinches were high in the trees looking silhouetted in the poor light. A Nuthatch called then was singing briefly, a Great Spotted Woodpecker drumming, and a Jackdaw was making a strange call unlike the commonly heard chattering ‘Jack /chack.’ A twig by the path was covered in Coral Spot Fungus Nectria cinnabarina. Flat calm conditions at Blakemere with only Mallards, Cormorant and a Mute Swan in residence. Continuing along the Canal a flock of Woodpigeons along with Stock Doves and Corvids were feeding amongst a seed crop field. A Marsh/Willow Tit in the gloom seemed to lack the pale secondary panel so probably the former. A Green Woodpecker yaffled and another Great Spotted Woodpecker flew by with its distinctive undulating flight. We crossed the canal bridge beside the thatched cottages and dropped down to Colemere.

Unbelievable numbers of Goosanders in small mixed male & female flotillas all over the lake – I lost count approaching 40! We had a chat to a couple who told us about some Scaup at the far end of the lake. One of their daughters is clearly a budding photographer and showed us a picture she had taken of a Marsh/Willow Tit we agreed it looked more like a Marsh Tit. Trying not to be too blasé about the Goosanders, we also noted a few Mallards, Goldeneye, Mute Swan and Tufty. By the Colemere Sailing Club we found the adult drake Scaup and further out beside a mob of BHGs were 1st winter male and female Scaup.

We walked along the lane from Colemere turning into Wood Lane, a couple of Great Spotted Woodpeckers in a bare tree. Further on we spied some Redwings with yet more dotted around other nearby trees totalling around 60 birds. Some extensive sand and gravel extraction works were in progress on both sides of the lane taking advantage of the rolling drumlin fields left over from the last glacial period. Peeking through the hedge at the Shropshire Wildlife Trusts Wood Lane Nature Reserve we noted Lapwing 50+ and Shelduck on the ponds and a rather fancy looking new hide. Time was pressing though we continued down the lane crossing the main road and onto the narrow track leading to Whitemere. There had been reports of a Long-tailed Duck here recently, no joy with that but we did add Shoveler and a male Pochard to the days tally. A nice sunset through the bare winter trees on the walk back to Ellesmere.