There were Waxwings reported yesterday (Saturday) at the tunnel end of Scotland Road, so we headed that way in hope. However, although there were plenty of red-berried trees north of the JMU building, some with Redwings in them, there were no Waxwings. Maybe next week!  We jumped on a bus back to Queen Square, then immediately onto another for Liverpool ONE, and we were just in time for the bus to Sefton Park.

The Alders at the south end of the lake were looking very attractive with their cones of the old year and catkins of the new. There were about fifteen Wood Pigeons picking about under them, an unusually large number all in one place. 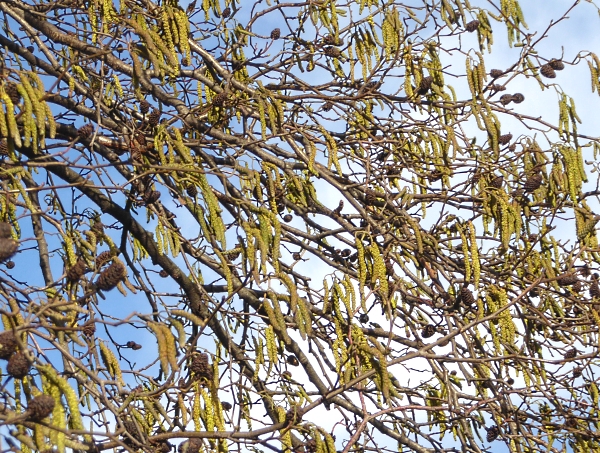 The lake had frozen overnight, but when we arrived it was partially melted and translucent, with many clear patches. The birds were the usual hordes of Canada Geese, Black-headed Gulls, Coots and Mallards, with a few Moorhens. About 1 in 50 of the BHGs are starting to show their black heads, but not this group standing on their reflections. 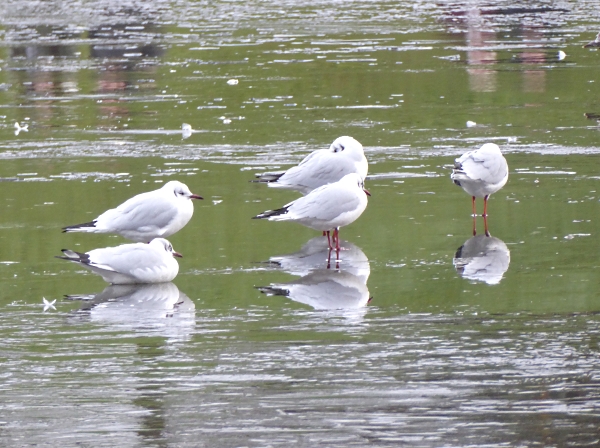 Further along we spotted some Mute Swans and a couple of well-grown cygnets. The park now has permanent signs around the railings asking people not to feed bread to the birds. 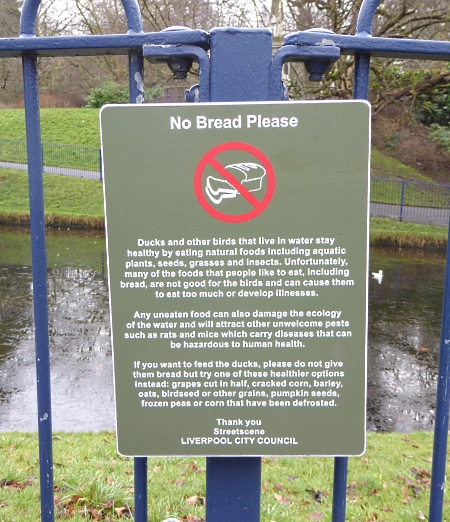 People weren’t taking any notice, though. One dad and daughter had at least four loaves of best sliced Warburton’s at their feet, and maybe more! 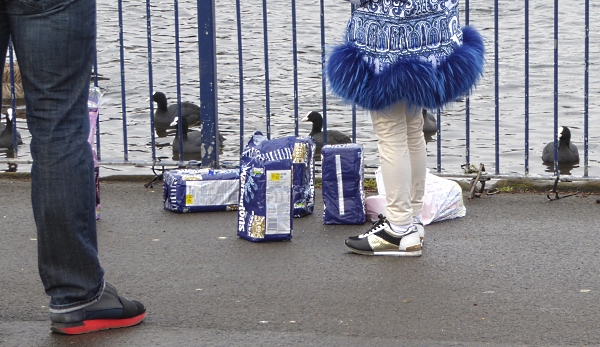 Too much bread is clearly a bad thing, but does it really cause Angel Wing? Some people say that it’s just a scam to make people buy the expensive bird food from the café. Most of the articles about it in the press just regurgitate RSPB press releases (which aren’t very definite), including these pieces from varied sources like the Guardian, the Express and “IFL Science”. Nothing especially authoritative.

We were bird-spotting and tree-spotting for the I-Spy lists today. We ticked off some very common trees including Holly, a Sweet Chestnut identified from the spiky husks on the ground and its spiralling bark, Turkey Oaks with their retained dead leaves and whiskery buds, Weeping Willow by the lake, a few Lombardy (Black) Poplars, and an Ash identified from the black, opposite winter buds. On the bank of the lake is a fine Atlas Cedar Cedrus atlantica. 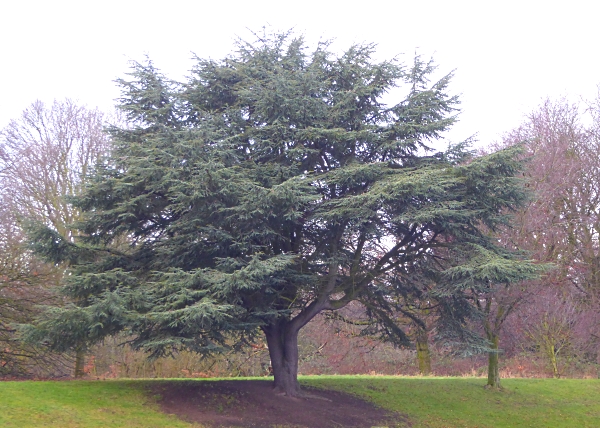 The male Yews are showing their clusters of flowers, like little balloons of pollen sacs, each only about 3 or 4 mm across. 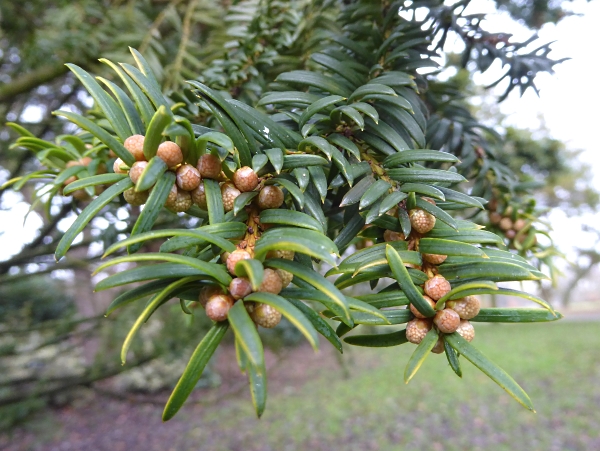 At the top of a tree there was a Great Spotted Woodpecker, and we heard the Ring-necked Parakeets, but couldn’t see them at first, although two flew overhead later. By the Eros fountain a wonderful Witch Hazel was in flower. 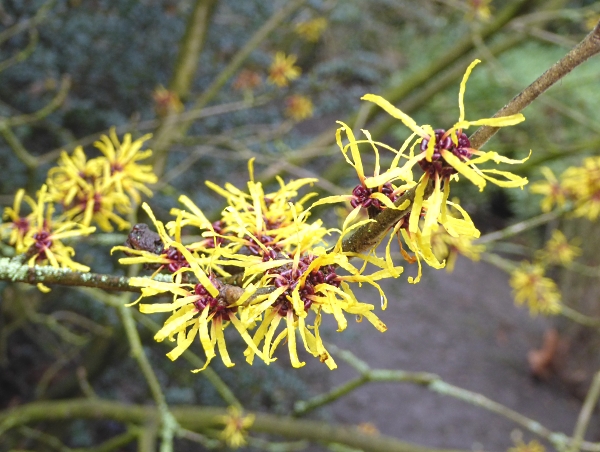 We lunched by the old aviary, where there was a Blackbird on the path and a Rat in the shrubbery. Grey Squirrels were all over the place. On the island in the lake north of the aviary, we stopped to look at a Moorhen up in a tree and then we spotted a most exciting bird below it, a Kingfisher! It was a female, and she was quite comfortable and relaxed on her perch overlooking the water, not at all bothered by the people on the path only about 50 feet (15m) away. She was watching the water below very intently, hoping for a meal, but we didn’t see her dive. 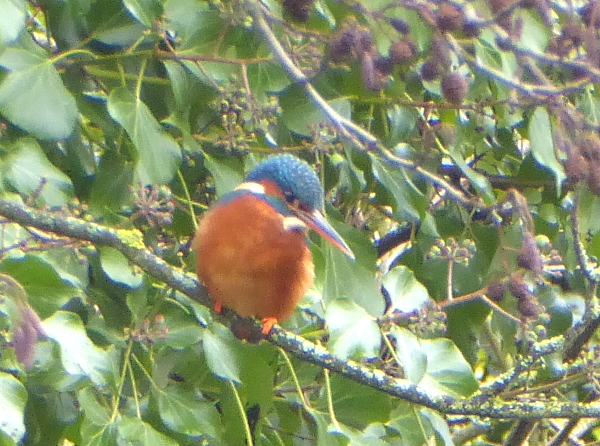 Further north again we looked at a group of trees with lots of knobbles and burrs on their trunks, and amongst the higher branches. We couldn’t identify the trees, but they didn’t look healthy. One of the low knobbles had Judas Ear fungus on it, perhaps a sign that the tree is dying. 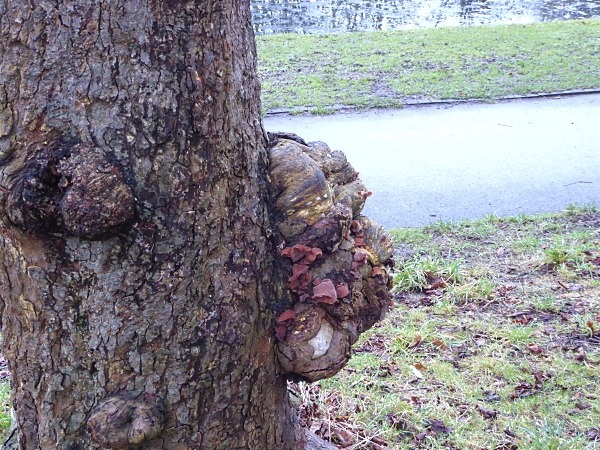 Near the top of the stream, where there’s a little weir and waterfall, a Heron was standing statuesquely amongst the reeds and red Dogwood stems. 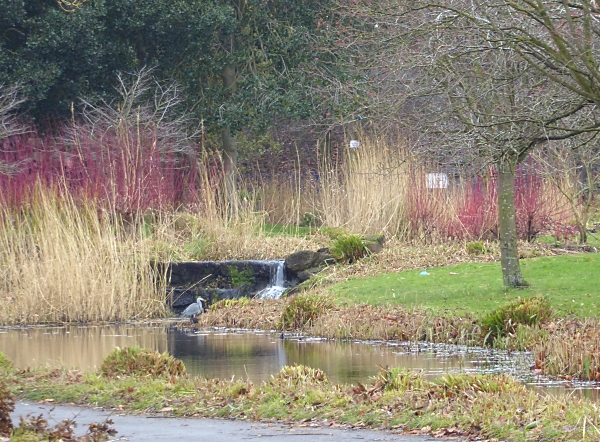 We followed the long avenue of London Planes southwards to the Dell. On the field were Crows, Black-headed Gulls and some juvenile Herring Gulls. We got another tree tick with the Deodar Cedar, and also noted some good ones that aren’t in the I-Spy book (dammit!) – a Dove or Handkerchief tree, a  Sweetgum / Liquidambar and a Persian Ironwood with its black oval flower buds just bursting, showing the dark red stamens within. 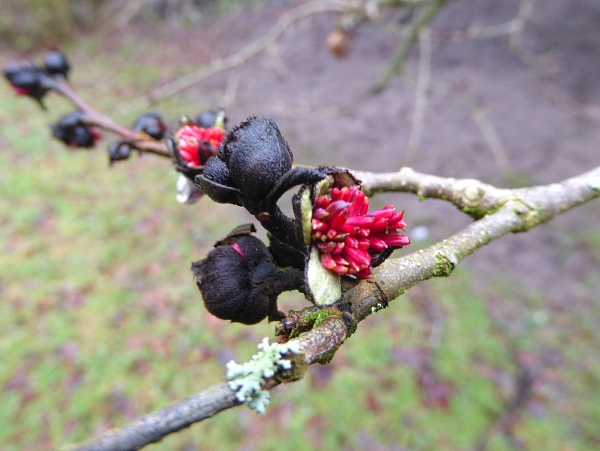 In the Palm House there was a concert by some ladies who were singing songs from the shows, but it wasn’t our cup of tea, so we sneaked out by a side door. It was the “biology” door (flanked by the statues of Darwin and Linnaeus) and right opposite it was a Corkscrew Hazel which I’ve not spotted before, next to an evergreen shrub. 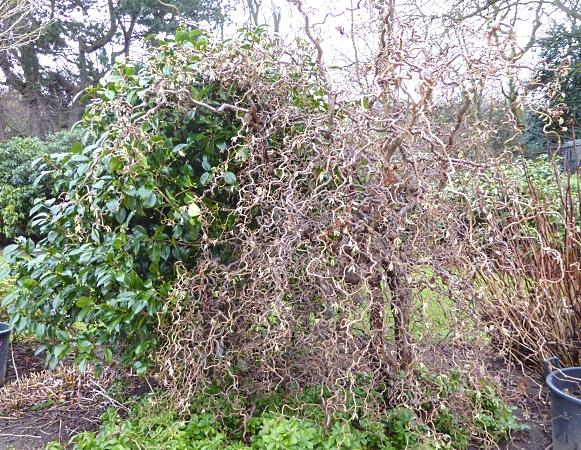 We returned along the lake. One Coot had a white Darvic ring on its left leg – CXT. It’s been reported to Kane Brides. (Added later. He reports that  CXT was ringed in Sefton Park on 09/09/2015, so it’s about 18 months old.) There was a Cormorant on a post, a couple of greyish-looking Lesser Black-backed Gulls, some black-and-white Tufted Duck and four fluffy brown Little Grebes diving near the island. 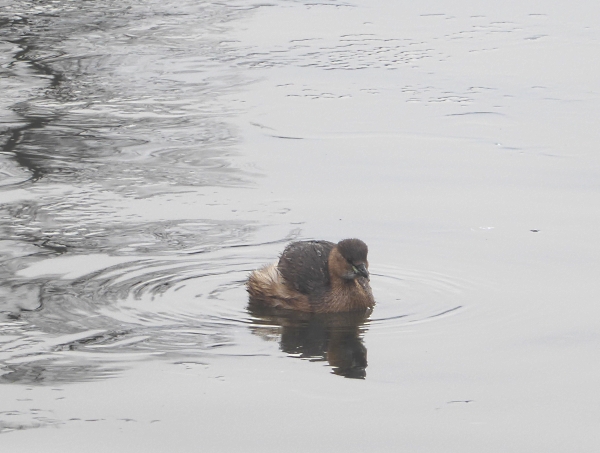 I had hoped to see a Monkey Puzzle tree for our list today, but there doesn’t seem to be one in Sefton Park, at least not in the areas we visited. However, the Beech tree we claimed at Eastham two weeks ago is now worth double points because one of us (not me!) could answer the related question – what was a chair maker called?  (Answer at the end). But we are up to 225 points (165 of them today), nearly a quarter of the way there!  (The man who made chairs was a bodger.)

Public transport details: Bus 82 at 11.13 from Liverpool ONE bus station, which was diverted via Hope Street because of Chinese New Year, and arrived Aigburth Road / Ashbourne Road at 11.35. Returned on the 82 from Aigburth Vale / Jericho Lane at 2.50, arriving City Centre at 3.15.