Our first walk of 2017 might have become a Waxwing hunt if any had been reported in Liverpool, but it seems they have all moved on to Warrington. (But I saw a few last week – see below.) We decided instead to go to Eastham, and perhaps meet the MNA there. 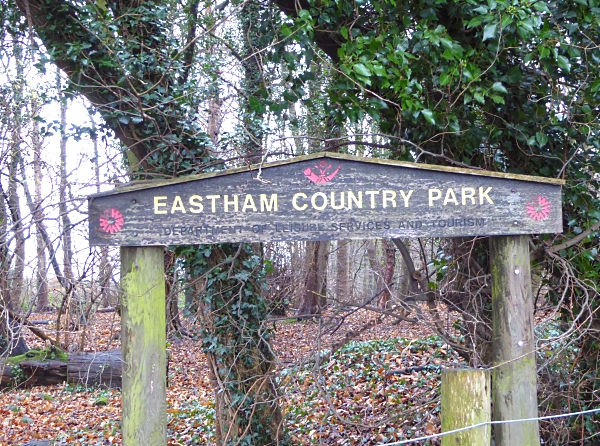 The lane off the New Chester Road was soft and muddy in parts, and the day was mild, damp and overcast. There were Magpies and gulls on the Leverhume Sports Field and Blue Tits in the trees. The big old Beech that was once Wirral’s largest tree (80 ft / 24 m tall at the end of the 20th century) is still gently rotting away. One fallen branch was covered with small Puff Balls about an inch across, the bracket fungi were covered in moss, and a hole in the stump was full of chips of light rotten wood. There wasn’t much colour anywhere, apart from a young Beech sapling retaining its bronze leaves, and a Hazel still bearing green ones. 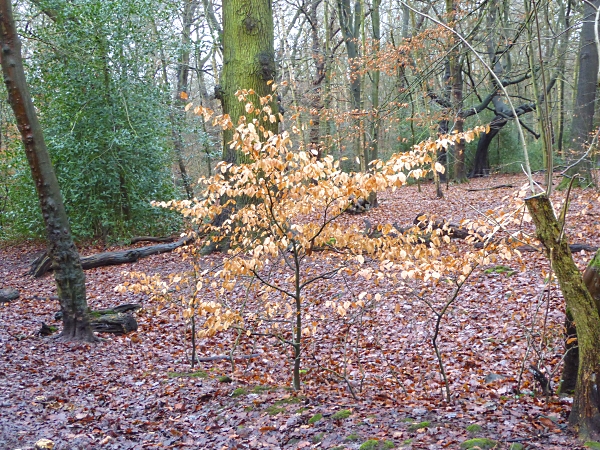 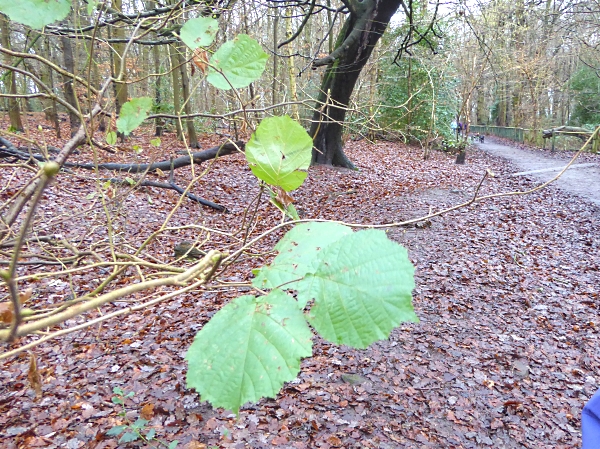 Down by the Eastham Ferry hotel we watched a small oil tanker coming out of Stanlow oil terminal. It was a Danish ship, the M/T Ternvag, on the way to Amsterdam. 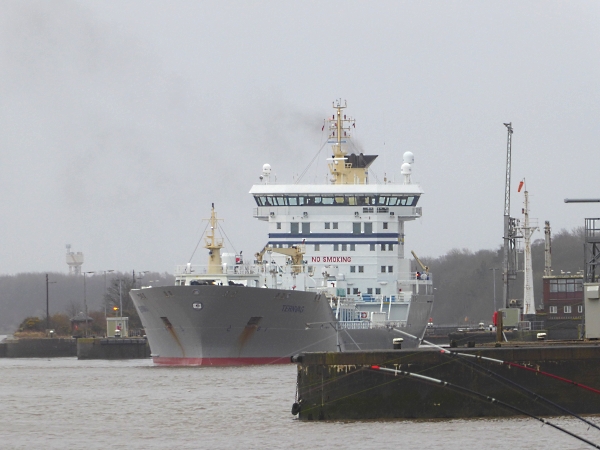 There were Cormorants perched on a wooden mooring. 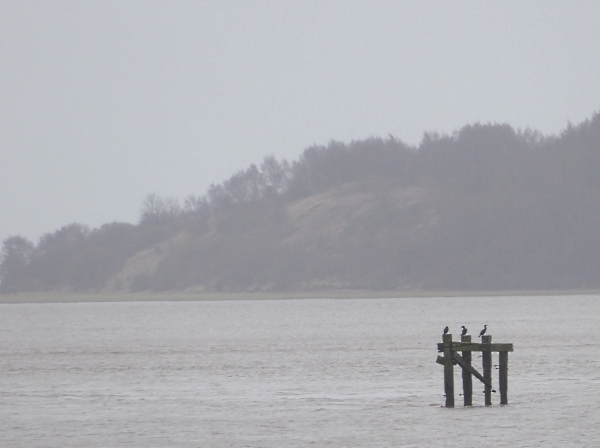 We lunched inside the Ranger Station and watched the birds coming to the feeders.  There were at least two Nuthatches, numerous Great Tits and Blue Tits, a Coal Tit, Chaffinches, Robin, Blackbird and a special treat – a Great Spotted Woodpecker. 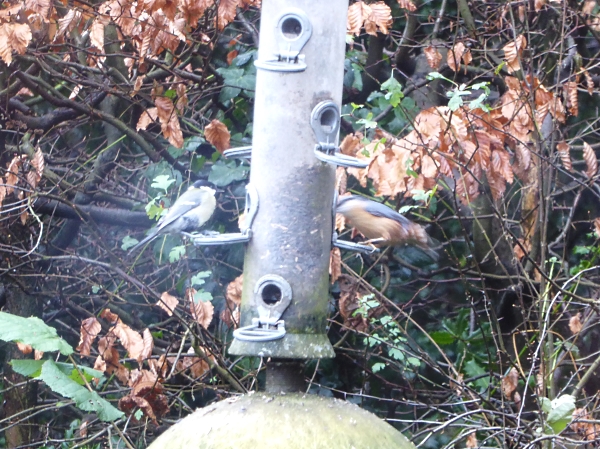 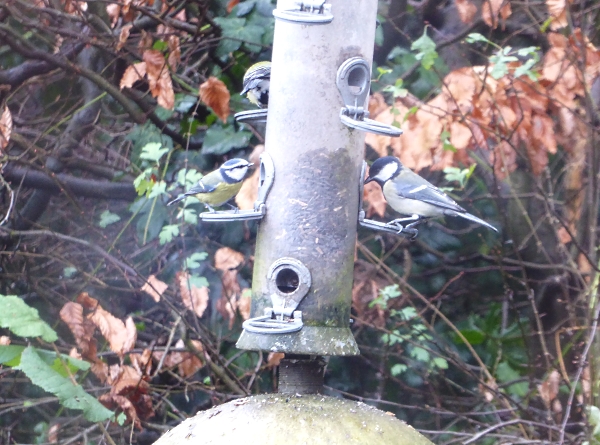 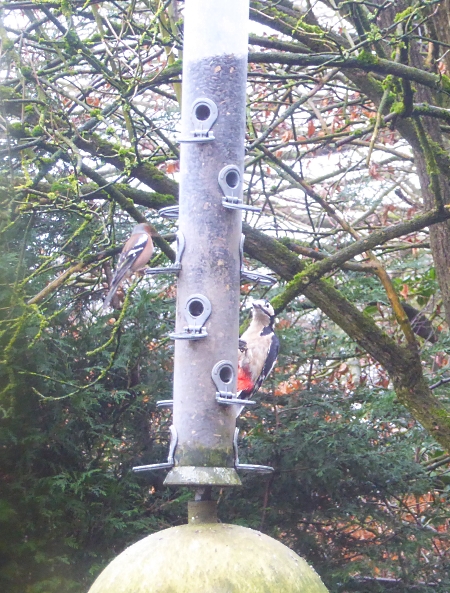 There were also at least five Grey Squirrels on the ground. When we met the MNA later, they said they had also seen a small group of Wood Mice poking about in one corner.

The Rangers have a three-panel leaf display in the education area, presumably showing trees that can be found in the area. One of the other panels shows a Tulip Tree, which seems unusual for a semi-natural woodland, and this panel shows more uncommon trees – Aspen, Giant Redwood and Western Hemlock. Are they in the wood too? 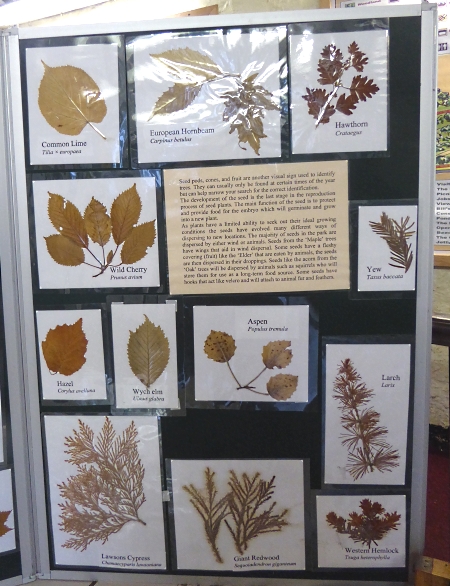 We spotted the Western Hemlock Tsuga heterophylla almost immediately, on the eastern side of the car park. Their foliage is a bit like Yew, but they have small woody cones. 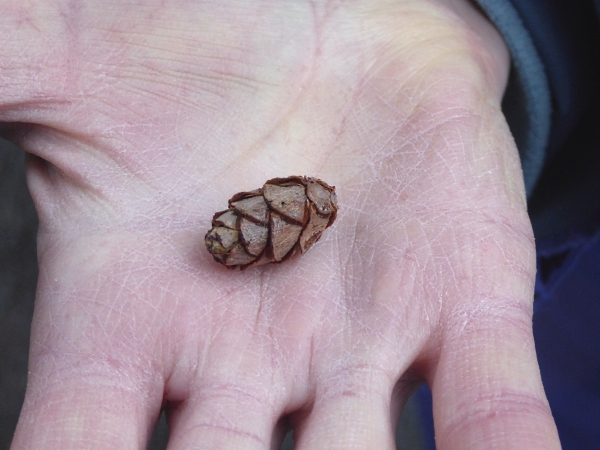 There was a Wren in the shrubbery and a Song Thrush on the open field. We walked about quarter of a mile northwards on the Wirral circular trail, then back again. 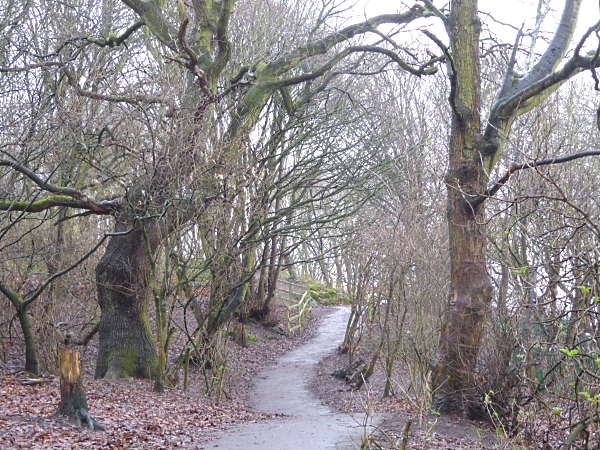 There were leaves of Red Oak underfoot, but we didn’t identify the tree. Some spikes of Daffodils were pushing up, but no Snowdrops. None of us has any in their gardens, either. Are they late this year?  It was misty and drizzling by then. We could hear an aeroplane from Speke climbing over our heads but it was invisible in the low cloud. The only flowers were on the Gorse. 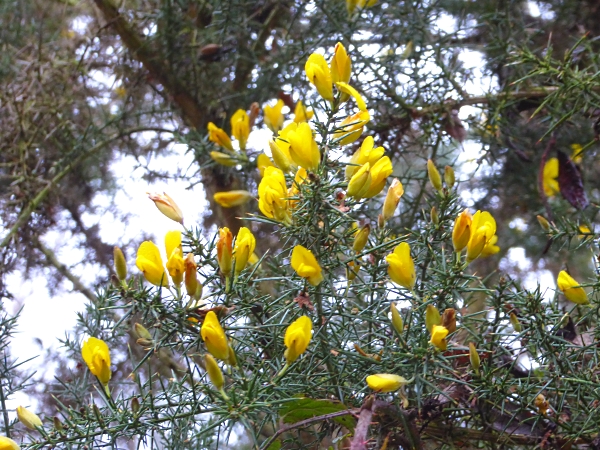 On the way back past the sports field, even the trees on the other side were disappearing in the mist. 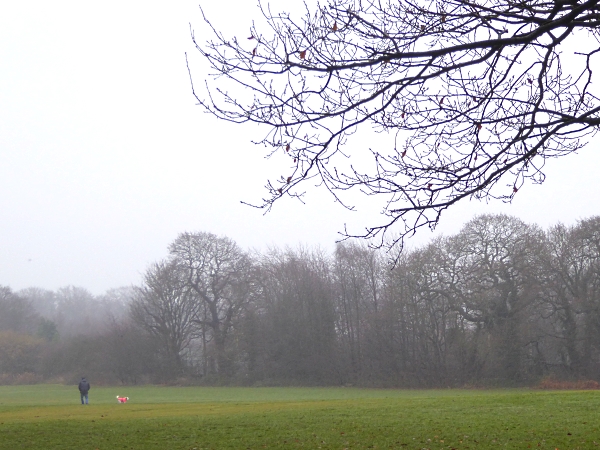 Did you have I-Spy books when you were a kid? They are back!  John has the one for birds and plans to use it only for Sunday Group sightings. If we do well and get 1000 points we can send off for a Super Spotter certificate!  I think we might have got 140 points today. (Added later – John says it was 180!) 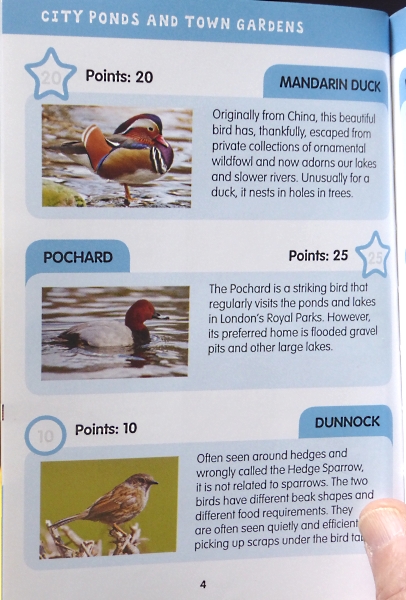 On the way home I bought I-Spy Trees, and plan to do the same. Not all of the trees we saw today are in the book, but we can count Pedunculate Oak, Sessile Oak, Beech, Hazel and Scots Pine, a total of 50 points. The top trees in the book are the 25-pointers, including Black Locust, Coast Redwood, English Elm (we’d have to go to Brighton for that one!), Foxglove Tree, Gingko, Indian Bean, Medlar and Tulip Tree. We can bag all of those, I think.

While I’m on the subject of trees, did you see this BBC news report on Boxing Day? It’s about the sequencing of the Ash genome and the possibility that British trees are less susceptible to ash dieback disease.

And those Waxwings? There were about 20 of them last Sunday 5th January on a very red-berried tree  on Stanley Road between Lambeth Road and Fountains Road, near the junction of  Easby Road. A Redwing was on it too, and tried to see the Waxwings off, but without much success. 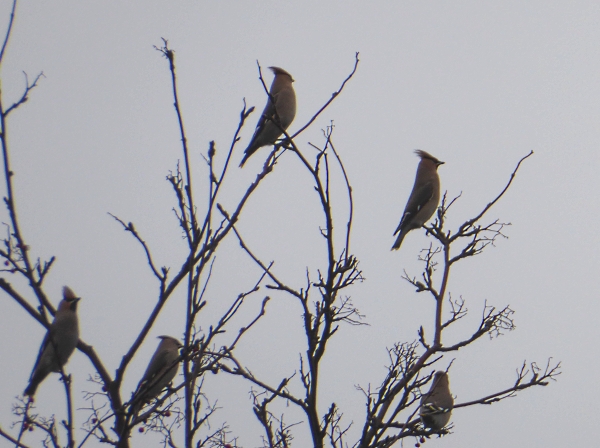 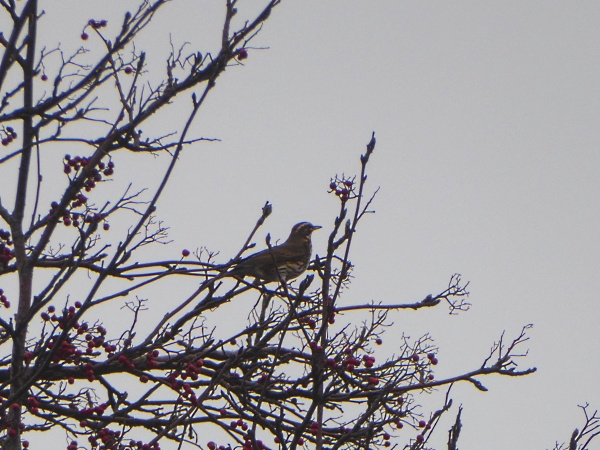 Public transport details: Bus number 1 from Sir Thomas Street towards Chester at 10.23, arriving New Chester Road / Tebay Road at 11.00. (The X8 also stops at that stop and is quicker). Returned on bus 1 from the stop opposite the one we arrived at, at 1.49, arriving Liverpool 2.15.