The planned destination for todays MNA coach trip was Hutton Roof but it was not to be… Our coach developed a mechanical problem close to Carnforth and we slowly trundled into the Truckhaven services in first gear.Nature is everywhere! so we took the opportunity to have a nose around a grassed area and hedgerow and were not disappointed. A Small Tortoiseshell Aglais urticae and Dingy Skipper Erynnis tages flitted over the grass and I found an Angle Shades Moth Phlogophora meticulosa resting on a leaf. 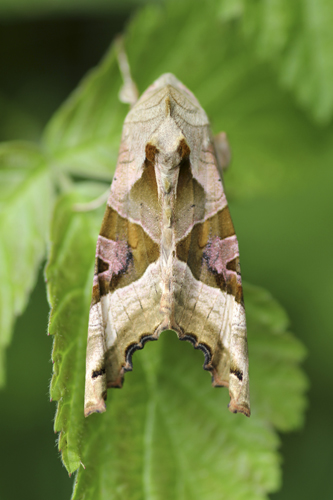 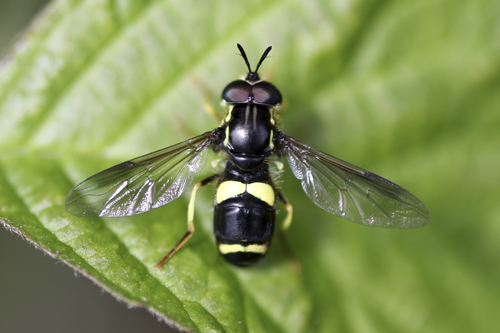 There were a number of Sawflies including the vibrant green Rhogogaster viridis. There must have been a recent hatch as Green Lacewing Chrysopa perla flew up as we walked through a reedy area. 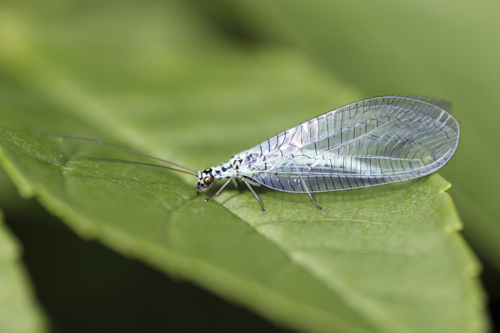 After a short deliberation we decided to change the venue to Leighton Moss RSPB Reserve and took the short drive in a local minibus taxi to the reserve. A group of MNA members led by John Clegg explored the reserve and had singing Cettis Warbler with some members having a glimpse of this skulking reedbed bird. 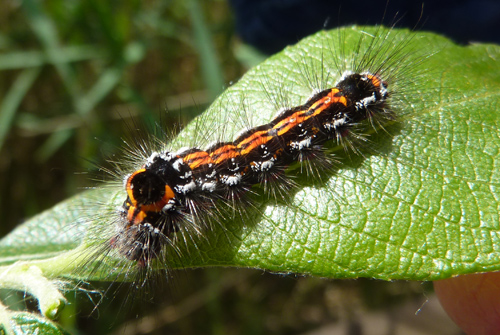 Margaret Parry spotted an interesting caterpillar. It was an inch long, orange and black covered in fine tufty hairs and feeding on Pussy Willow. Barbara later identified it as the Yellow Tail Euproctis similis. An interesting wigwam built from reeds has been designed by the Leighton Moss warden David Mower for Bearded Tits to nest in. He had a dilemma as Bitterns prefer wet reedbeds whereas the Beardies prefer drier conditions. Luckily they love the wigwams and he now makes 40 a year. 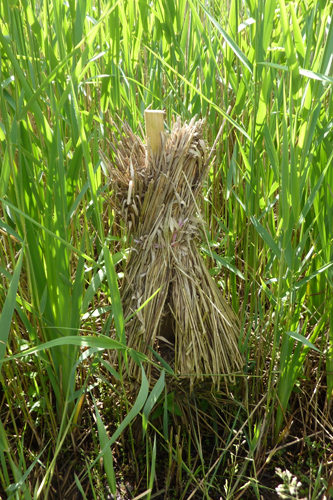 The other group of MNA members led by Dave Bryant headed up to Trowbarrow Quarry and onto Gait Barrows NNR. A female Broad-bodied Chaser Libellula depressa and a number of Common Blue Damselflies Enallagma cyathigerum and Blue-tailed Damselflies Ischnura elegans were zooming around us as we ate lunch in Trowbarrow. I chased after a Cinnabar Moth Tyria jacobaeae which eventually settled and there were a couple of Dingy Skipper Erynnis tages. Plants included Common Rock-rose Helianthemum nummularium, Herb Bennet Geum urbanum, Common Dog Violet Viola riviniana, Wild Strawberry Fragaria vesca and Common Twayblade Orchid Listera ovata. A photographer pointed out a Fly Orchid spike Ophrys insectifera! This mimic Orchid has evolved a flower structure and also produces a pheromone scent in order to attract male digger wasps to pollinate the orchid.

A small pond held Newts and three male Broad-bodied Chasers Libellula depressa were on patrol joined by a female.As we walked along the small lane joining Trowbarrow to Gait Barrows NNR Dave Bryant and Chris Butterworth both had glimpses of a male Pied Flycatcher. Not surprisingly given the recent rain there was some fungi about with three large Dryad’s Saddles Polyporus squamosus, Oyster Mushroom Pleurotus ostreatus, Deer Shield Pluteus cervinus and Birch Woodwart Hypoxylon multiforme. 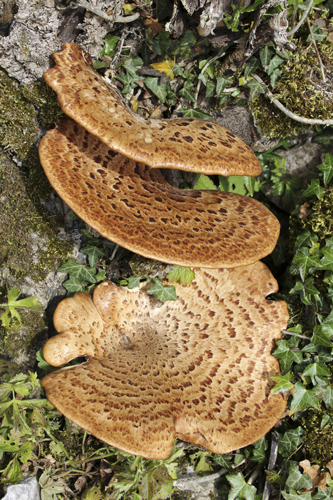 We hot hoofed along the boardwalk beside Little Hawes Water stopping briefly to view the Bird’s-eye Primrose Primula farinosa – a native pink-flowered perennial herb that is a nationally scarce plant of the northern Pennines; Common Gromwell Lithospermum officinale  a green herbaceous plant with pale yellowish-white flowers and a few flitting Brimstones Gonepteryx rhamni. 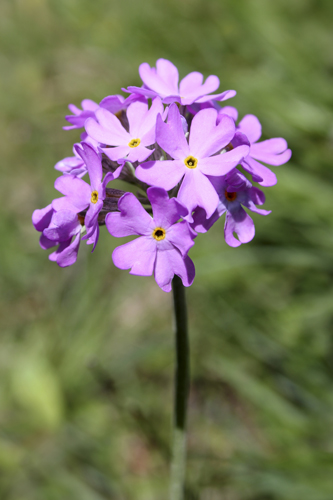 We followed the trail onto the famous limestone pavement where rainwater has slowly eroded broad flat blocks (clints) to form a variety of solution features including deep fissures (grikes) and shallow runnels. Gait Barrows has the most diverse flora of any pavement in Britain and we soon found Herb Paris Paris quadrifolia and Angular Solomon’s Seal Polygonatum odoratum. Herb Paris is a plant that was used both in ancient marriage rituals and to guard against witches. Although it is noted to have four oval-shaped leaves we found a few plants with five and six leaves. 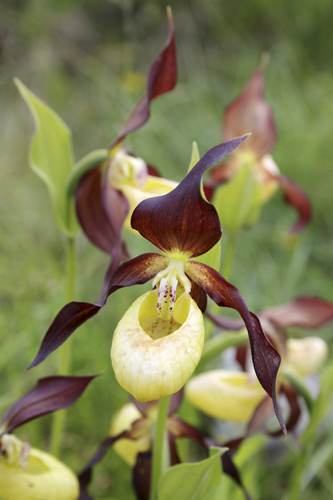 Our target species was Britains rarest flowering plant the Ladys-Slipper Orchid Cypripedium calceolus. Victorian plant collectors caused Britains population to decline to near extinction. Indeed in 1917 the Lady’s Slipper Orchid was officially declared extinct until in 1930 a botanist found a single plant on a Yorkshire hillside. Natural England has worked closely with Kew Gardens to cross-pollinate this surviving wild plant and attempt to re-introduce it to some of its former flowering sites. 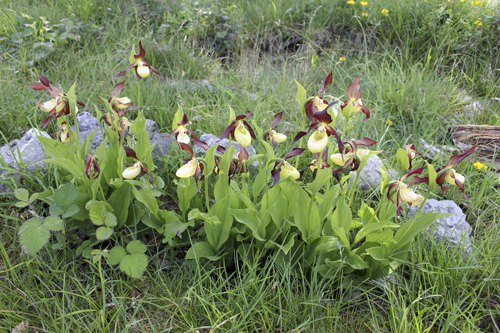 As we continued across the limestone pavement I noticed an orange and black coloured Leaf Beetle then a mating pair that I later identified as Cryptocephalus bipunctatus bipunctatus var. sanguinolentus. 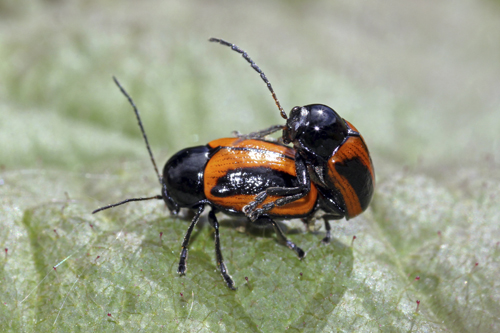 A Garden Warbler heralded our arrival in the meadow area where the hemi-parasitic herbaceous plant Yellow Rattle Rhinanthus minor was doing a great job at restricting grass growth and thereby allowing other species to thrive – Common Spotted Orchids Dactylorhiza fuchsia were joined by Northern Marsh-orchids Dactylorhiza purpurella and Ragged Robin Lychnis flos-cuculi. Chris Butterworth found a Common Frog Rana temporaria and invertebrates included a Sexton Beetle Nicrophorus sp. and Soldier Beetle Cantharis rustica. All too soon it was time to return for our minibuses back to Liverpool.