Well, that was the summer over! It was raining gently when we set out, and rather more persistently when we arrived at Chester. We didn’t risk the planned canal walk but headed straight into Grosvenor Park looking for shelter. What we found instead was the “Chestival” Roman weekend, so we abandoned our plans to look at wildlife and spent the rest of the day watching the parades, visiting the stalls and watching the belly dancers! 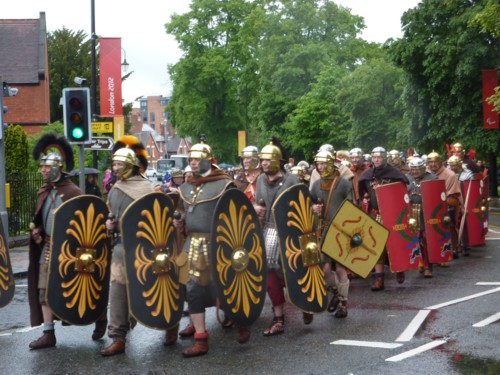 The only interesting bird we saw was a Mute Swan on the canal towpath as we were on our way back to the station. It had a green Darvic ring, number CB11. The Cheshire Swan Study tell me it was a male bird, ringed at Winterley, Sandbach on 13th August 2001 when it was then a 1-year-old juvenile. It was re-spotted at Winterley several times in 2001 and early 2002, but not since then. It is now 12 years old, and has been “under the radar” for ten years.