Arrowe Park was once a farm owned by a wealthy Liverpool ship-owner and slave trader called John Shaw. His nephew John Ralph Nicholson Shaw inherited the land in 1829 and set about building Arrowe Hall and a country estate. Arrowe Hall (now a Grade II listed mansion) and its park were acquired by Lord Leverhulme in 1908, who subsequently sold the estate to Birkenhead Corporation in 1926. On 1 April 1974, ownership was transferred from Birkenhead Corporation to the Metropolitan Borough of Wirral and is now a public park. The Hall is now a private care centre. 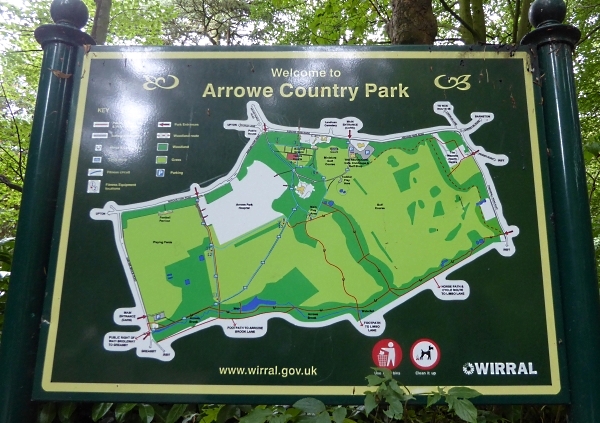 We went in by the main entrance and lodge and headed southwards. It was damp, overcast and blowy, but happily the promised rain never came. As the woods opened out towards the tennis courts we found two less-common oaks next to each other, a Red Oak Quercus rubra (left leaf below) and a Pin Oak Quercus palustris (right leaf below). 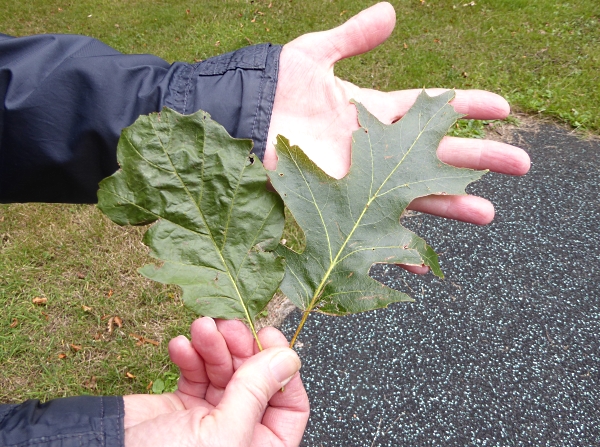 Underneath them were these lovely acorns, which I think belonged to the Pin Oak. 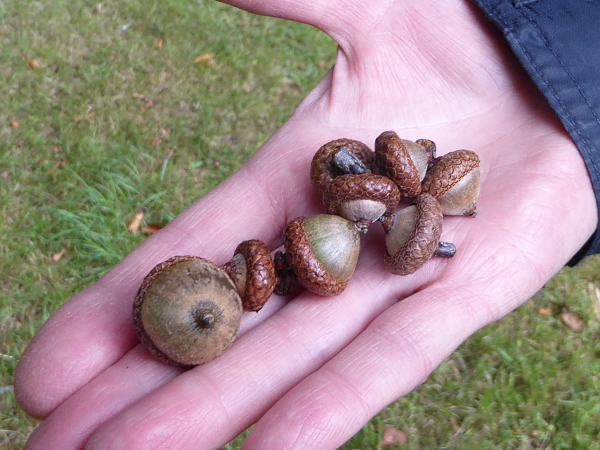 The old clay tennis courts are now neglected, and overgrown with Ragwort and Yarrow, but a few of the grass courts are still in use. Between the clay and grass courts was a line of molehills, and at the end a pair of interesting trees. I think they are some kind of uncommon Elm. The leaves appeared to be long compound leaves like Ash, but there were dark brown buds in every axil, so all the “leaflets” were separate leaves, arranged alternately. The leaves themselves were shiny dark green with serrated edges and twisted irregular bases, which is a characteristic of Elm leaves. They weren’t rough like Wych Elm and there were no seeds underneath to give us a clue. They were mature trees, not young ones planted since the English Elms all died in the 1980s. It’s hard to identify unfamiliar trees on first sight but my favourite candidate is Smooth-leaved Elm Ulmus carpinifolia, but I can’t rule out Siberian or Chinese Elms. 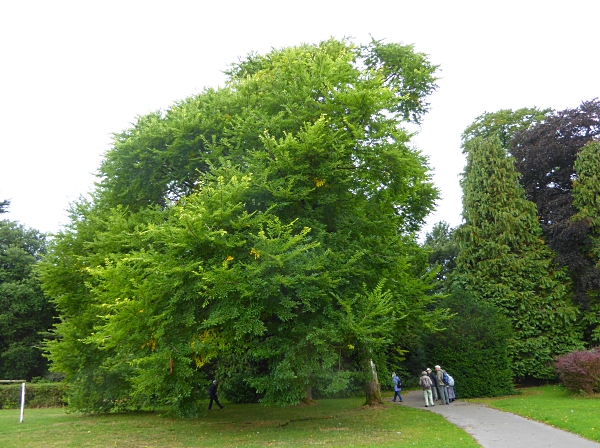 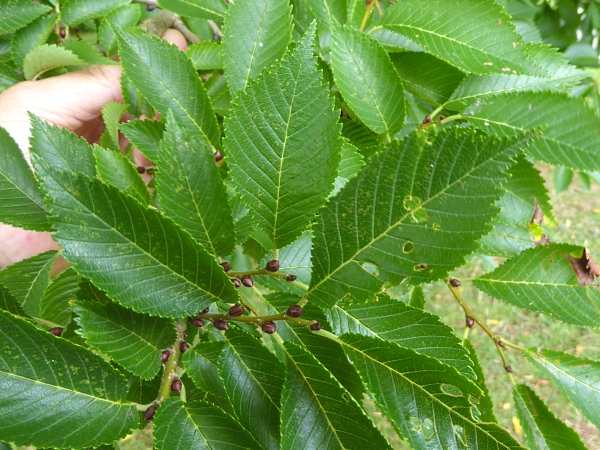 As we crossed the open field towards the Arrowe Brook two Mute Swans flew over, followed by about 20 Canada Geese. The field was streaked with carpets of bright yellow flowers, giving a buttercups-in-spring effect, but they were one of the dandelion-ish flowers, perhaps Common Hawkweed.  Maybe they have all flowered together, refreshed by last week’s rain after the drought. 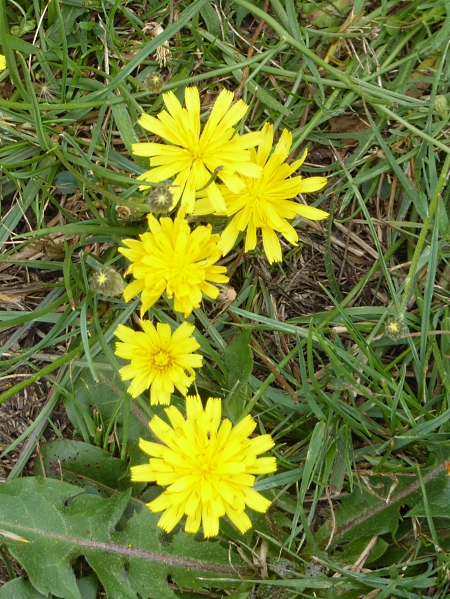 The brook and lake had Canada Geese, moulting Mallards and one young Moorhen. We hoped for Mandarins but there was no sign of any, and we are always alert to the possibility of a Kingfisher along the Arrowe Brook too, but there were too many people about. There was a Robin on the bridge where the birdseed is always scattered.  Is that a one-legged Robin? 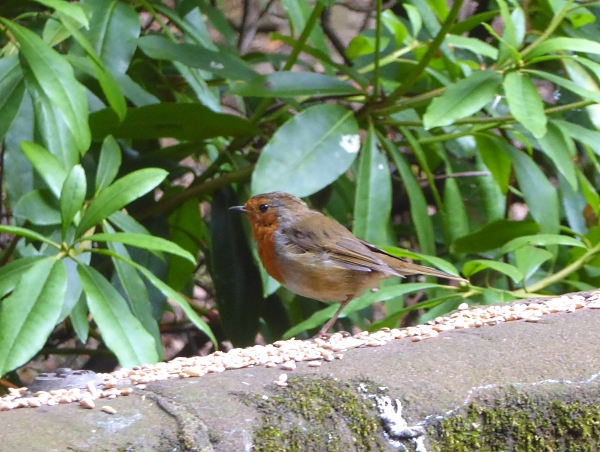 Back in the woods we heard some noisy screeching and wondered if Ring-necked Parakeets had colonised the park, but it was coming from a pair of Jays having an argument over something. Blackberries are ripening everywhere and we saw our first red Hawthorn berries. 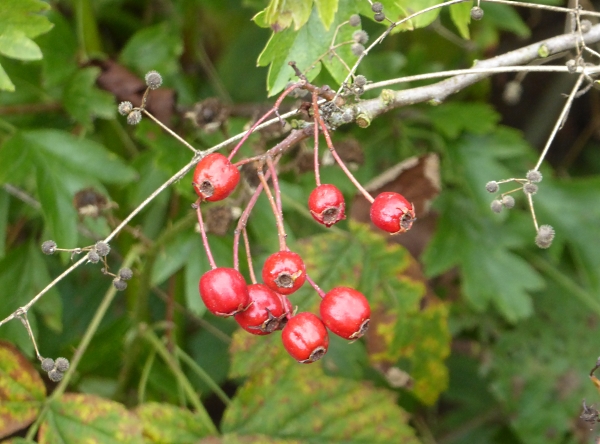 We were on the look-out for the Cedar of Lebanon said to be near Arrowe Hall. One promising-looking level-branched tree on the far side of the lawn turned out to be a Deodar Cedar, identified by its long and uneven needles. 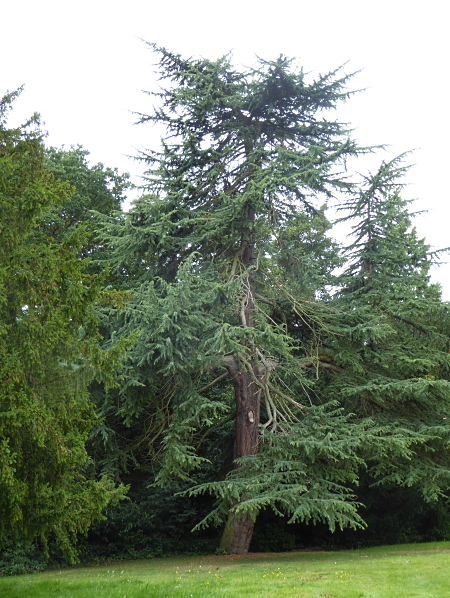 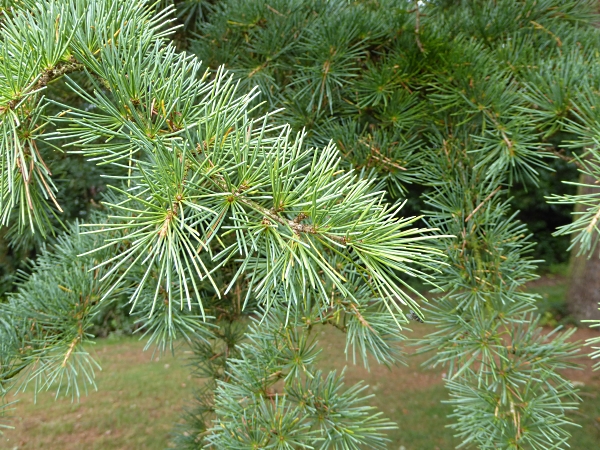 There was another candidate tree just past the hall, and yes! the needles were darker green and they were all of the same shorter length. Hooray!  It’s the only mature example of a Cedar of Lebanon I know on Merseyside, now that the one in Calderstones has died. People don’t seem to have planted them in the last 50 or more years, preferring Deodars. (And as a bonus, right next to it was a Blue Atlas Cedar, so if you want to compare and contrast a set of three true cedar species, this is the place!) 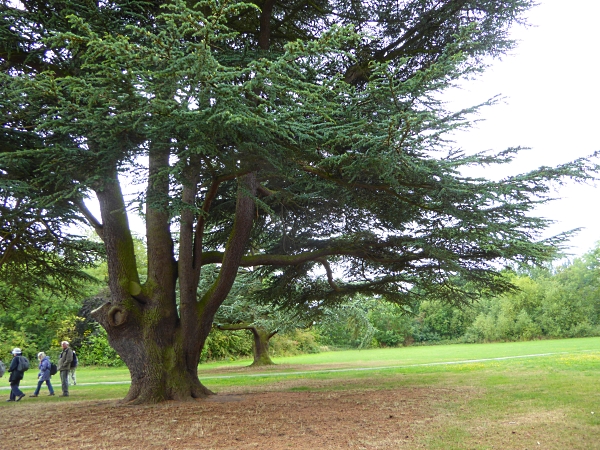 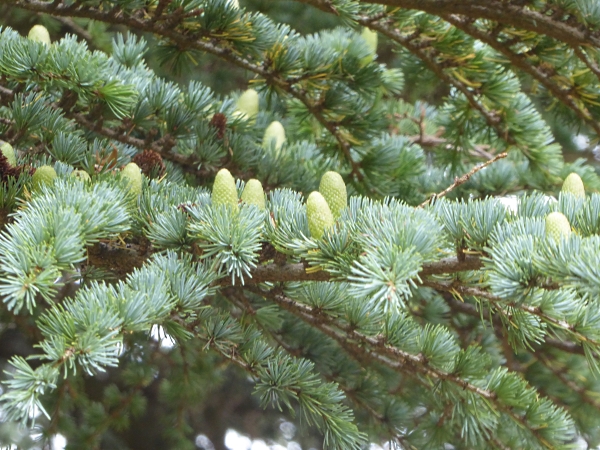 We returned via the derelict Ranger’s Office, now overgrown with Ivy and Buddleia, vandalised and starting to fall apart. 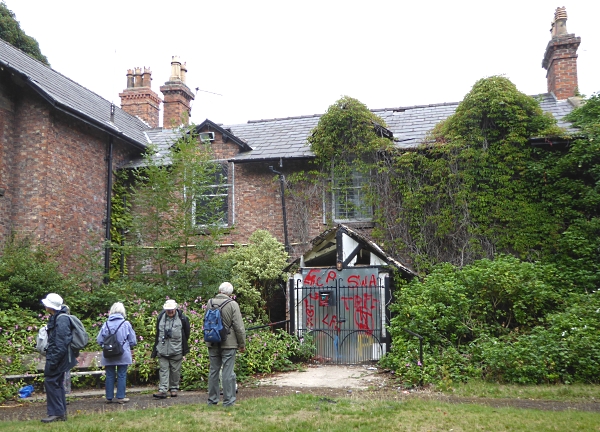 Its garden is being swamped by Bramble and Himalayan Balsam. 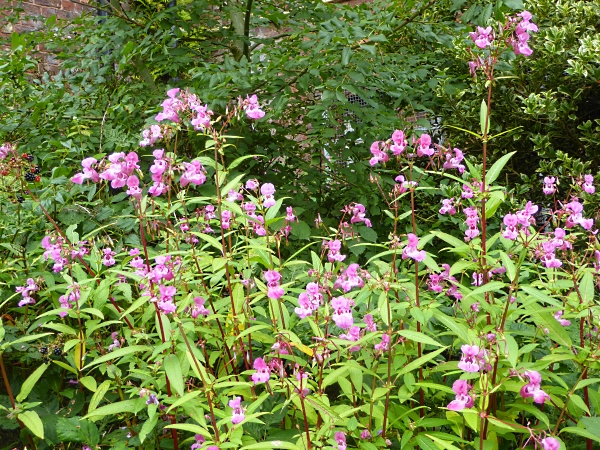 Towards the main gate we spotted a young Indian Bean tree, with a few hanging bean pods. So Wirral have been planting some trees since they took over the estate. 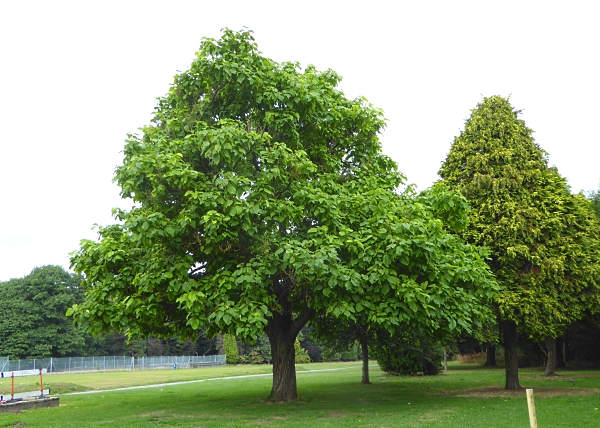 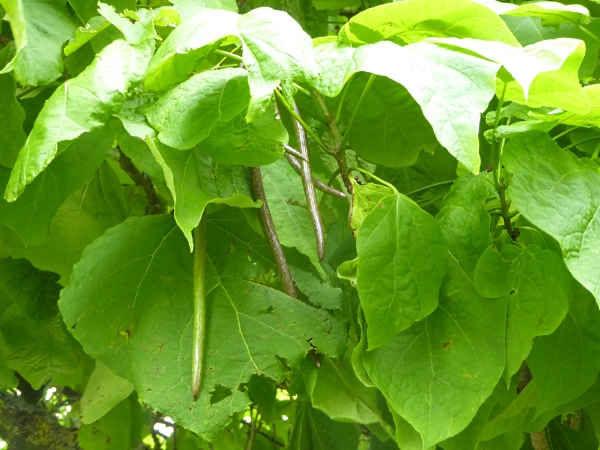