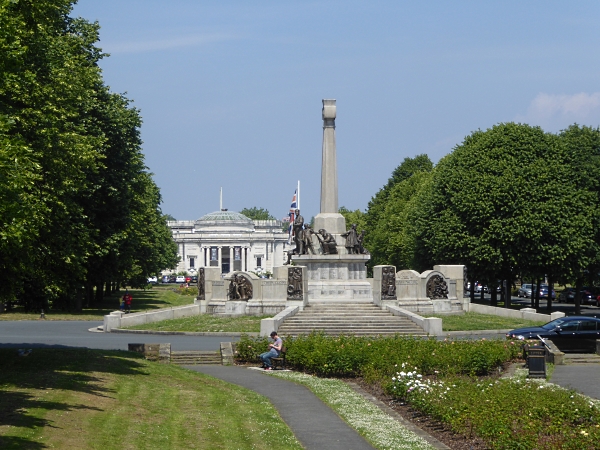 On another wonderfully warm and sunny day we went to Port Sunlight with yet more trees in mind. Port Sunlight is a model village built for the workers at the Sunlight Soap factory by William Hesketh Lever from 1888 onwards. It is now a conservation area with a wonderful stock of Arts and Crafts houses and the Lady Lever Art Gallery. Near the south end of the estate is a small valley called The Dell, with some fine specimen trees. There is a Gingko and a very large Tulip tree, which we were delighted to see was in flower. Amazingly, the flowers smell of chocolate! 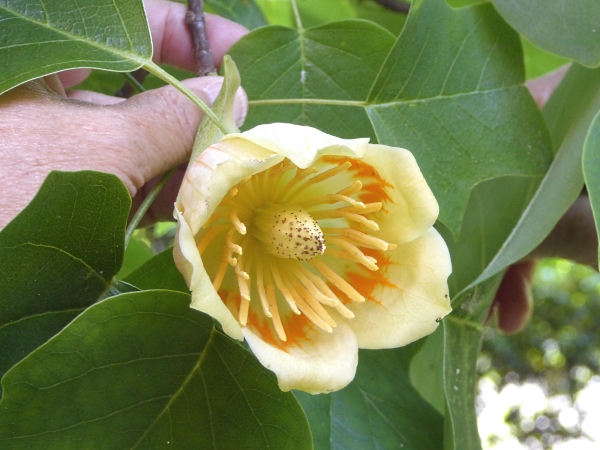 Two adjacent Lime trees appeared to be from different species. The one with the sprouting, twiggy trunk and flower stalks hanging down was a Common Lime Tilia x europaea while the one with a clean trunk and sticky-up flowers was a Small-leaved Lime Tilia cordata. Limes are very hard to distinguish, but they are easiest at this time of year. 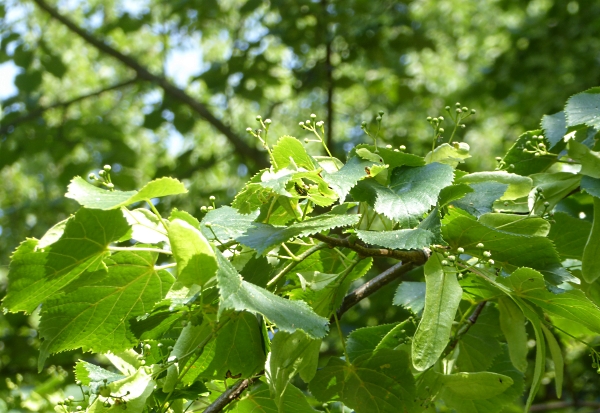 Small-leaved Lime with flowers sticking up

Near the bridge was a small Swamp Cypress, with a Dawn Redwood on the opposite bank. By the side of the path was the only surviving puddle in the area, which was a magnet for a bathing Blackbird, a family of Blue Tits, a Chaffinch and a Goldfinch. Beyond the bridge was a Honey-Locust Gleditsia triacanthos with long, fierce spines on its trunk.  The Antarctic Beech, which we remember well from previous visits, was nowhere to be found (has it died?) and we have never spotted the Wollemi Pine, which is rumoured to be here. One tree, which we had never noticed before, is something of a mystery. It’s not much more than a rounded bush yet, bearing “ace of spades” leaves with red tinges and reddish stalks. The branches were notably smooth to touch and the leaves appeared to be arranged in threes. There was no sign of any flowers or fruit to give us a clue. It could be something quite unusual, because it’s in a place where they plant interesting specimens. I have an idea that it might be a young Dove Tree / Handkerchief Tree, which is just the sort of thing they would plant there, but we will need to keep an eye on it in the future. 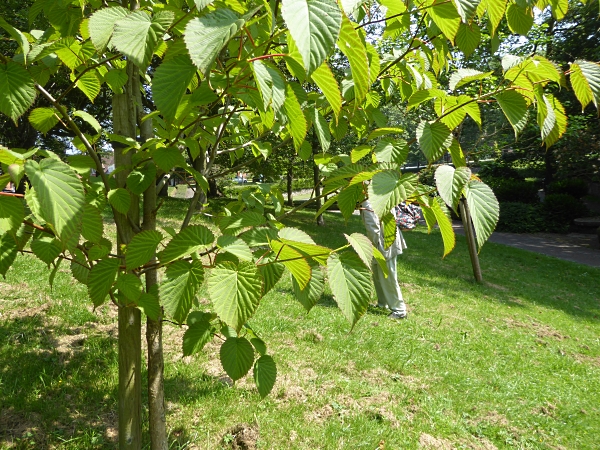 As we were passing Christ Church we spotted a very large-leaved tree. Blow me, I think it was the very rare Moose-bark Maple Acer pensylvanicum! It’s by the fence off Church Drive, with a sign saying it was planted by the Women’s Institute. There were no visible seeds to confirm the ID, and the bark didn’t look like it belonged to the snake-bark group, but the large three-pointed leaves were very characteristic. 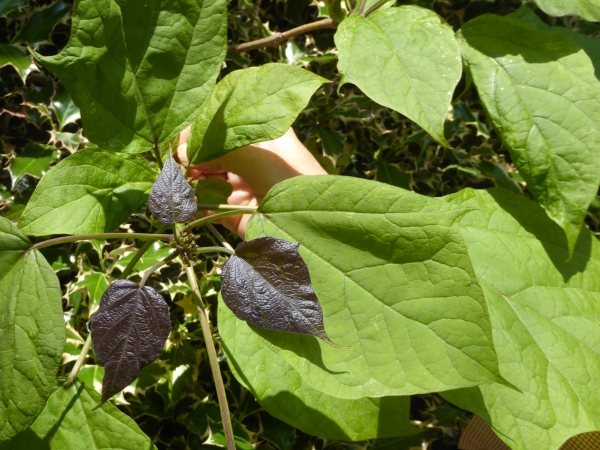 The churchyard had several Weeping Ashes, each with big bunches of forming seeds called “ash keys”. It seems to be a bumper year for Ash seeds. Were the Weeping Ashes all planted at the same time? They look similar to each other, but perhaps they aren’t as old as the church, which was built 1902-1904. William Hesketh Lever was a member of the congregation and both he and his wife are buried in “The Founders Tomb” attached to the church. 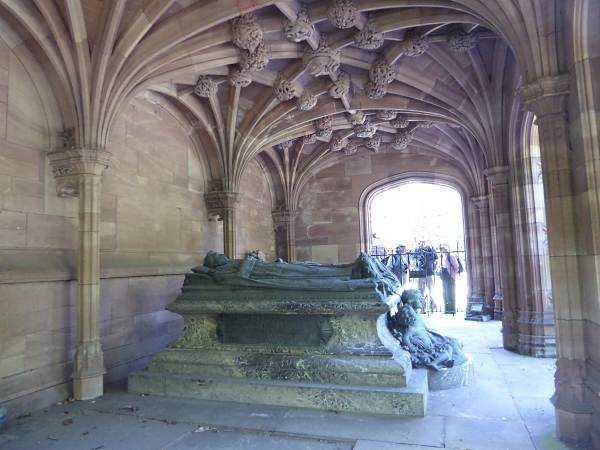 We lunched in the Rose Garden at the south end of the central drive. All along towards the Lady Lever Art Gallery is a double avenue of Limes. They weren’t twiggy at their bases so they weren’t  Common Limes, but the seeds were all hanging down, so they weren’t Small-leaved Limes. The leaves were dark green and dull, while the forming seeds showed signs of five ridges. Could they all be Large-leaved Limes? 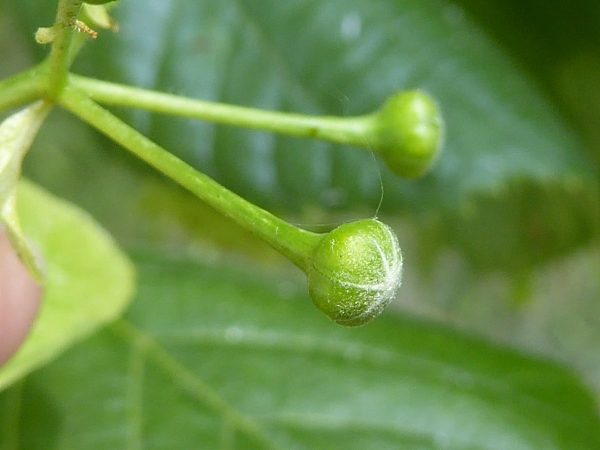 In the sheltered central courtyard of the Garden Centre there is an old Olive tree in a huge planter, which may be the only Olive on Merseyside. It won’t fruit in this climate, though. There is also an Indian Bean Tree at the exit, near where they sell the garden sheds. The leaves are huge, and it is just showing early flower buds. 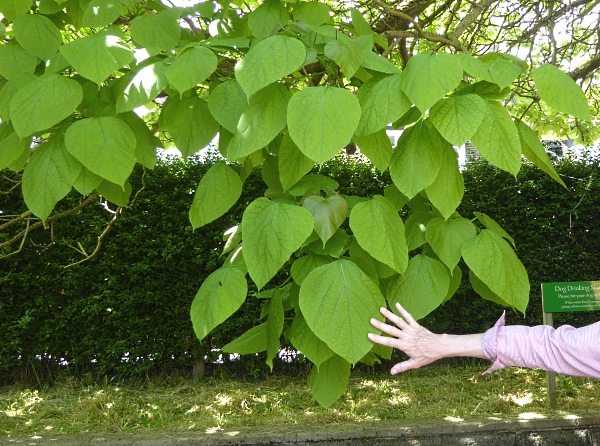 By the War Memorial and along The Causeway are five False Acacia trees Robinia pseudoacacia. They blossom like Laburnum, but all white. Their flowers are sometimes only thinly-produced, but they are having a spectacular year, and look magnificent just now. 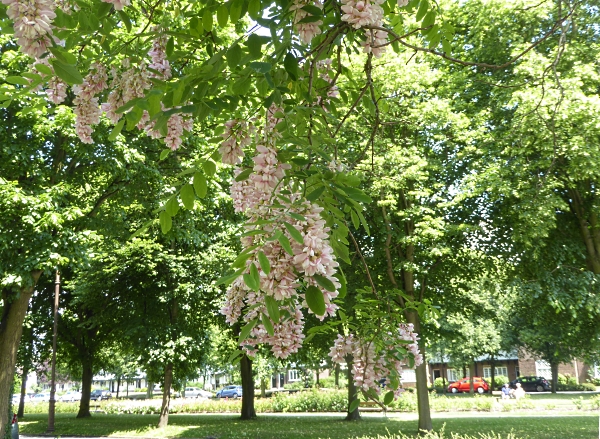 Then we wandered along Greendale Road to the Judas Tree between numbers 32 and 31. It is an unusually big tree for its species, but sadly it looks like it is in some distress. There were some late flowers still hanging on, though. 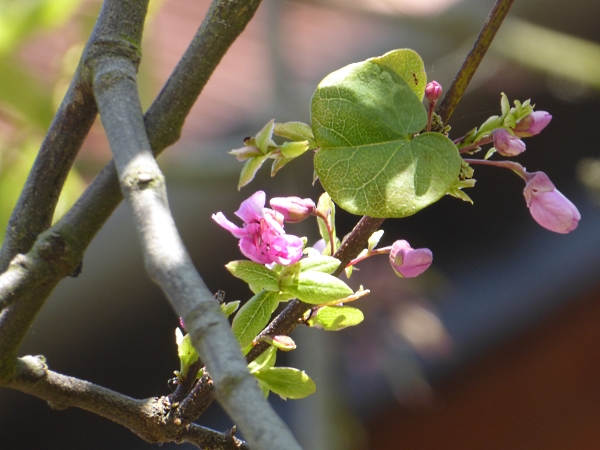 The New Ferry Butterfly Park occupies some old railway sidings just over the road from Port Sunlight. They have planted all the food plants required by our native butterflies, on the principle of “build it and they will come”. It seems to be working. 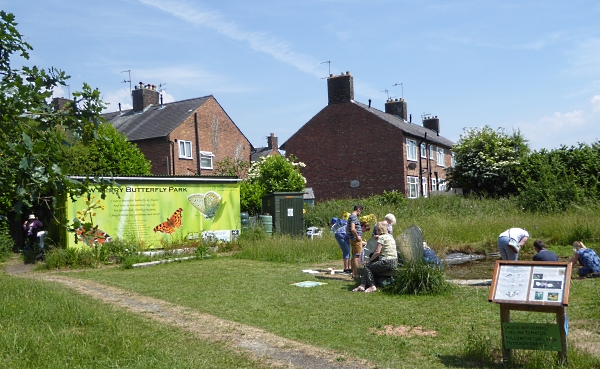 They also have a pond containing many Smooth Newts, which are regularly netted by kids doing pond-dipping, before being returned to the water. The poor creatures must be used to it by now. Two species of Damsel Fly, the Common Blue and the Blue-Tailed, were there in good numbers, some mating, and all moving far too fast for a picture. There were also several individuals of the dragonfly Broad-bodied Chaser, with blue males and brown females. Then our first butterfly, a Meadow Brown. 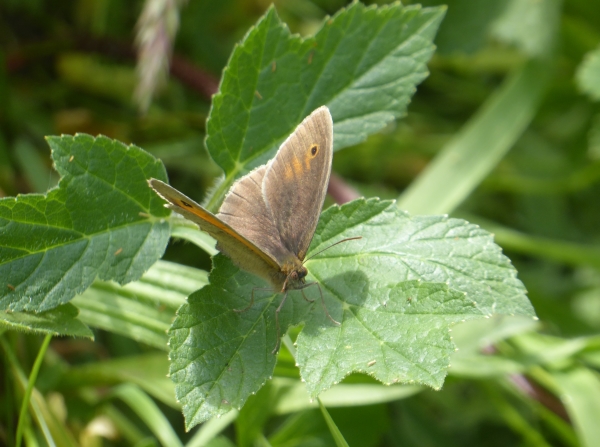 Dog roses were out, both pink ones and a dark red variety. 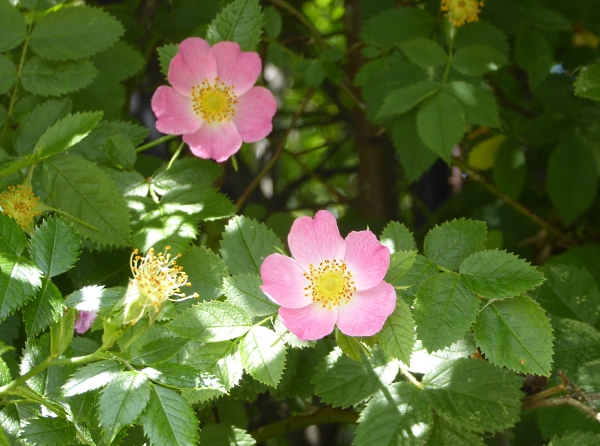 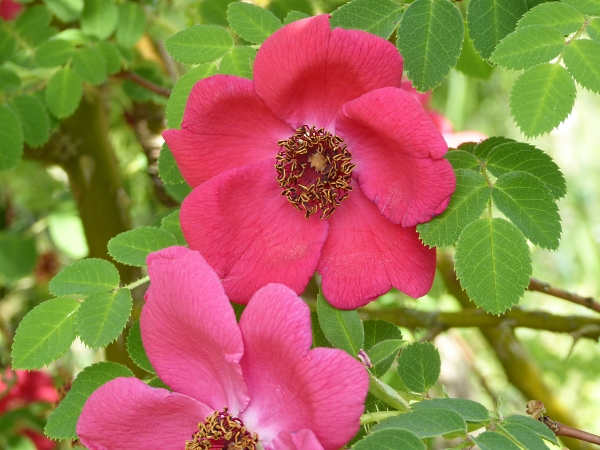 The meadows held both Marsh Orchids and this one, which some thought was a Pyramidal Orchid, but which might be one of the Spotted species. 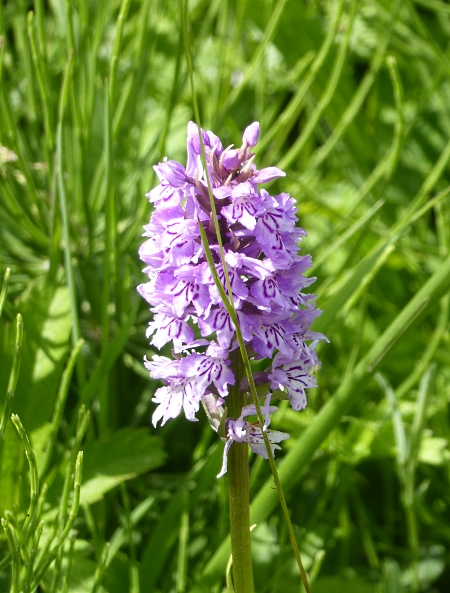 Several Brimstone butterflies were seen in rapid flight, and we identified a small tree that is one of their food plants, the Alder Buckthorn. The leaves are wider near the tip and the flowers are clustered against the stem. Just as we had decided what the tree was, a Brimstone flew over and landed at the top, confirming our ID. 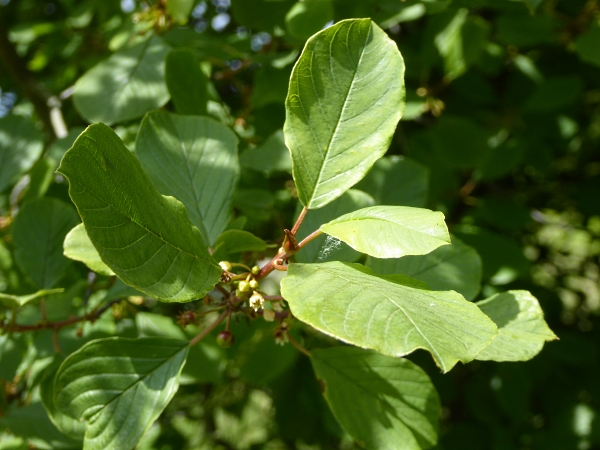 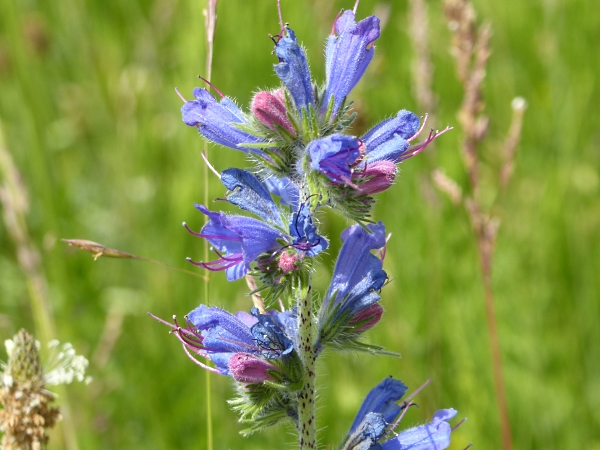 There were Speckled Woods in the shady areas, and our best find of the day was this splendid male Large Skipper, sunning itself on Bramble and hoping to attract a mate. 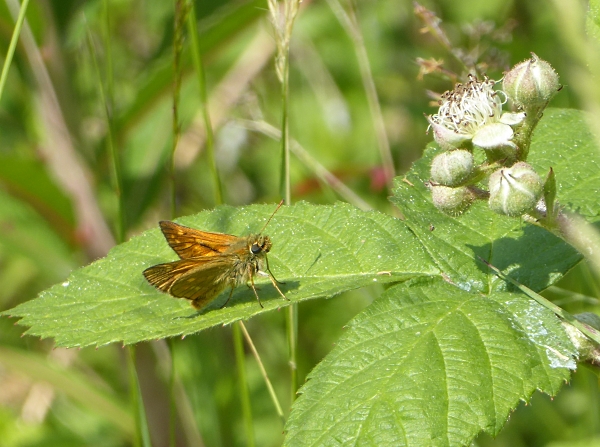 Public transport details: Train from Central at 10.15 towards Chester, arriving Port Sunlight station at 10.32. Returned on the train from Bebington Station at 2.52, arriving Liverpool Central at 3.07.