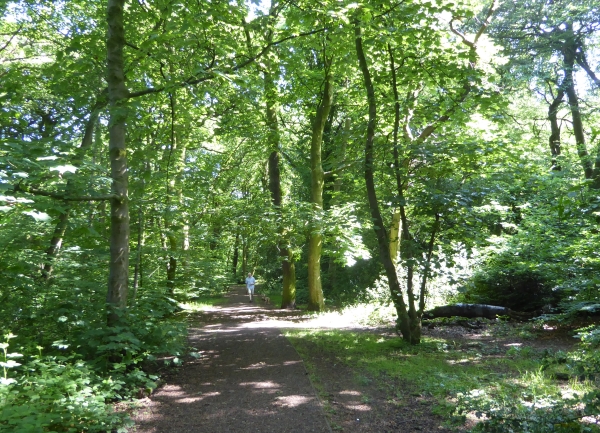 Childwall is a suburban village in south Liverpool, mentioned in the Domesday book and older than Liverpool itself. We wondered if Childwall Woods were ancient woodland, but the nature reserve signboard says they were planted in the 1700s as part of the garden of Childwall Hall. On a hot and sunny day we welcomed the cool shade with its continuous birdsong – Robin, Chaffinch and probably lots of other we couldn’t identify. The woods are mostly a mix of tall Beech and Sweet Chestnut trees, with an understory of Rhododendron and Privet. The leaves of the Rhododendrons were all clean, with no sign yet of the Cushion Scale Insect infestation Pulvinaria floccifera, which makes the leaves black and sticky. There was a lot of it about when we were last there in June 2015 and we have often seen it since when we were out and about, and some of us have had it in our gardens. The edges of the paths had lots of Wood Avens, also known as Herb Bennet Geum urbanum, with small yellow flowers and round heads of hooked seeds. 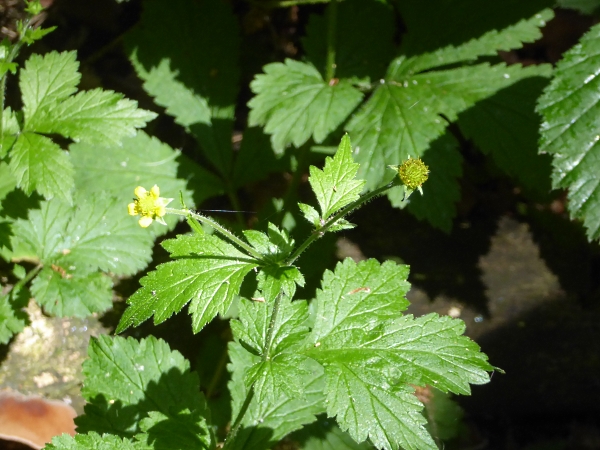 Then we emerged into the sunny open fields, which were covered in Buttercups. 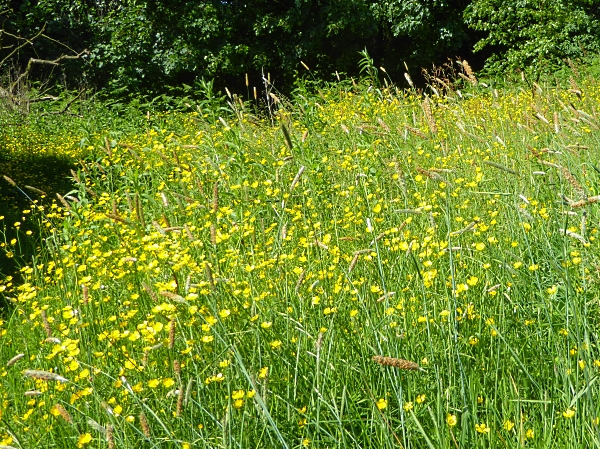 The damp patches had clumps of Goat Willow and Yellow Flag, Brambles were starting to flower, and the drier parts had masses of Ragged Robin. 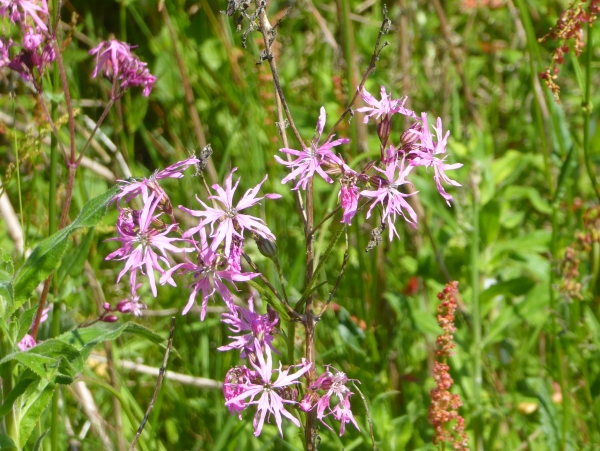 In amongst the tall grass and flowers were several orchids. The flower heads were purple and conical and some said they could see spots on the lower leaves. The signboard said the meadows supported both Common Spotted and Southern Marsh Orchids, and we thought they were probably the latter. 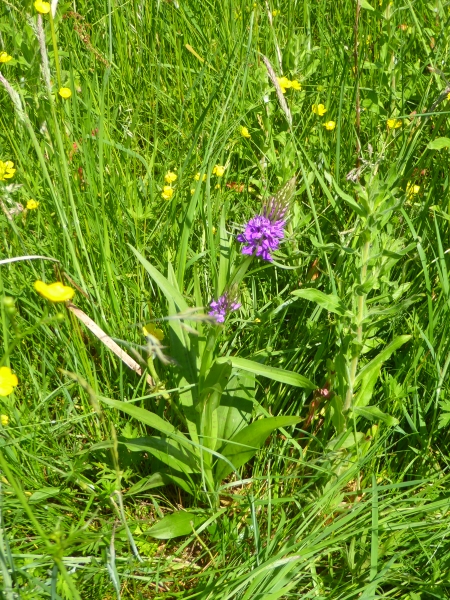 This is the sort of place where we would expect to see Swallows, Swifts or Martins zipping about for the insects over the meadows, but there were none. Are they still all held up by bad weather on their migration route? They are very late!  The Elder flowers were coming out, but they hadn’t started producing their scent yet. We thought that one of the small wayside trees was a Downy Birch Betula pubescens, with upright branches and brown bark. The Hogweed and Cow Parsley lining the paths made a marvellous display. 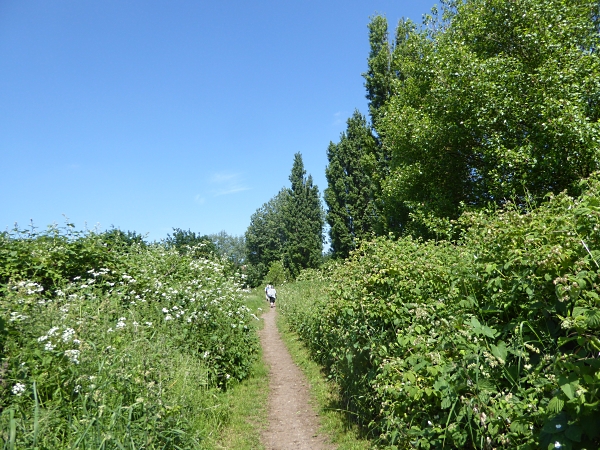 There are said to be 16 species of butterfly here, but all we saw was a small white one, whose underwings looked like it was a Green-veined White, but which had dark spots on the upper wings, so was probably a Small White. A Chiffchaff was calling, and we stopped to listen to a loud bird call from the trees below. It was repeating in threes and fours, but it wasn’t very inventive or melodious. Surprisingly, we heard the same kind of song in the same place three years ago, and thought it might have been an unskilled young Song Thrush. Could it be the same bird three years later, who has learned nothing, or a younger generation with the same poor taste in song, or is it something else altogether?  From that spot there is a good view north-eastwards over to Huyton Church tower in a wooded dip and Prescot Church spire on the skyline. 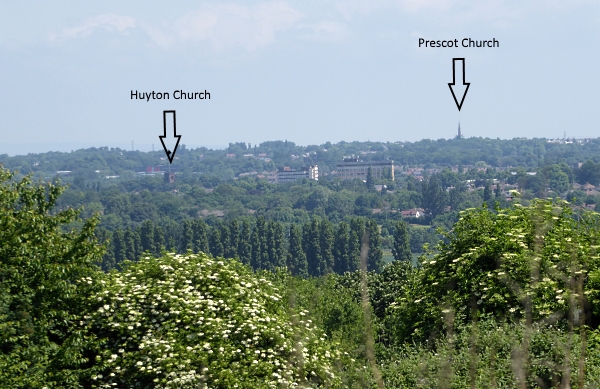 We lunched in the Garden of Remembrance behind Childwall All Saints church. It’s Grade 1 listed and the only mediaeval church in Liverpool, with a 14th century chancel and a 15th century south aisle and porch. The Bird Cherry tree there was just past its flowering, but in late June 2015, nearly 3 weeks later in the year, it had just been coming out. We looked at several trees in the churchyard. A purple-leaved one seemed to be an obvious Sycamore variety, but the new seeds had their wings straight out, just like a Field Maple. The leaves were far too big for that, and there is no suggestion in any of my tree books of a purple form of the Field Maple, so I guess it was just an aberrant Sycamore.  Another tree had us foxed. It had narrow shiny green leaves, alternate, with pale undersides, and a few dangling strings of pale brown woody-looking catkins. We thought it was something from a hot climate, and at home I looked up things like Olive, Bay and Portuguese Laurel, but now I think it was just a Holm Oak, looking untypical because it was spring-fresh. Our third interesting tree was some kind of young Fir near the War Memorial. The upright fat cones near the top of the tree were covered in bracts and looked unstable, as if they were about to disintegrate. The needles were all upswept. Those cones suggest one of the Silver Firs, genus Abies, while the upswept needles mean it was probably the common Silver Fir Abies alba. However, all those conifers are still a bit of a mystery to me! 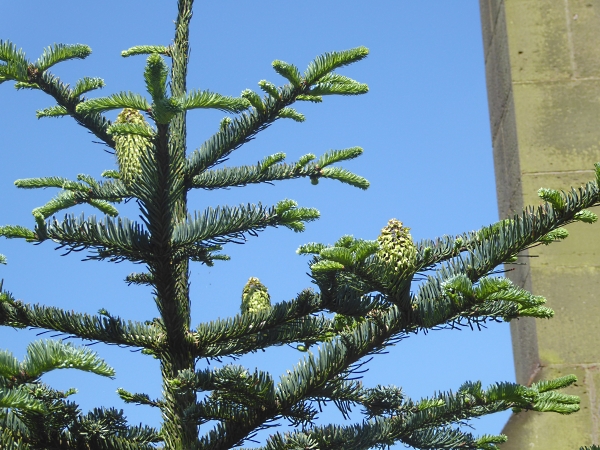 We headed up past the Childwall Abbey pub, with a Buzzard soaring overhead, and re-entered the woods by a different entrance. A pair of Speckled Wood butterflies were courting in a patch of sunshine. A Jay flew into the top of a nearby tree.  On the trunk of a fallen Beech was a couple of slimy yellow patches, each about 2″ (5 cm) across, probably the unpleasantly-named Dog Vomit Slime Mould, Fuligo septica. 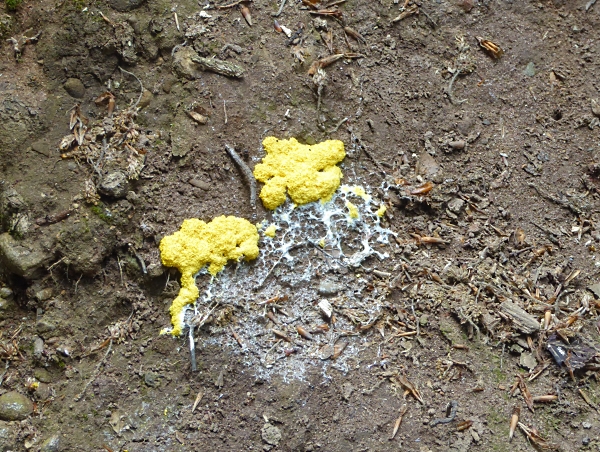 Near the Woolton Road roundabout there used to be two huge and overgrown Leyland Cypress trees, a hazard to traffic when one fell, and its twin has now been cut down. They have recently been replaced by two much smaller and daintier trees, still with their nursery labels attached. One is a pink-flowering Cherry Prunus ‘Accolade’, while the other is a white-blossomed Pear Pyrus calleryana ‘Chanticleer’. According to “London’s Street Trees” by Paul Wood, the Chanticleer Pear is now much-planted in London and is one of the most common street trees in New York City. The “survivor tree” from the 9/11 attacks is a Chanticleer Pear. Finally, we hoped to “tick” Laburnum, which we have unaccountably failed to note for the last few weeks while it was flowering magnificently, and we still didn’t see any on our walk today, but there were plenty in the suburban gardens, spotted from the bus on the way back into town.

Public transport details: Bus 75 from Liverpool ONE bus station at 10.25, arriving Woolton Road / Childwall Park Avenue at 10.50. Returned from Woolton Road opposite Cabot Green on the 78 bus at 2.20, arriving City Centre at 2.45.