There were reports of seven Scaup showing well at West Kirby Marine Lake, much easier than the dubious distant one at Marshside a couple of weeks ago. So that was our destination for the day.

The tide was out, and many people were walking out to Little Eye and Hilbre.  We went around to the Marine Lake and there they were, four adult male Scaup and three females, and they came obligingly close. Many people were there to see them, several with cameras with huge lenses. The locals were a bit bemused and asked what was going on. Most had never even heard of Scaup. The birds were diving frequently and coming up with food. Occasionally they were harassed by Herring Gulls, who flew close over their heads, hoping they would be startled into dropping something the gulls could steal. 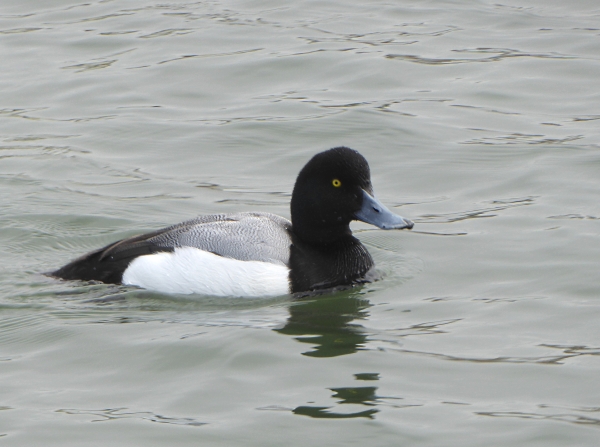 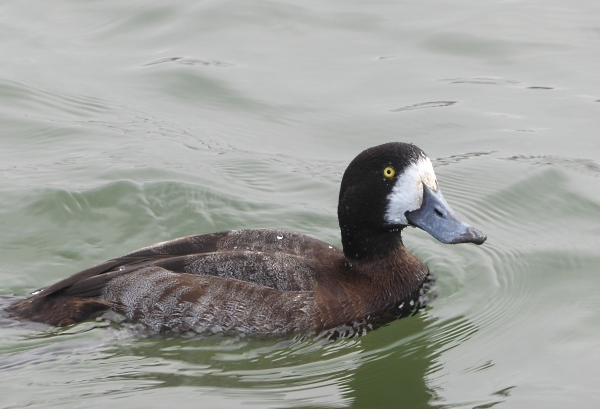 Outside Morrison’s supermarket are four pine trees with oval tops, that are a bit of a puzzle. The cones are far too big for Scots Pines, about 3 inches long and quite “fat” or broad. There weren’t any on the ground, but we found a fallen twig and were able to determine that they were 2-needle pines, with each needle about 3 inches long. What are they? 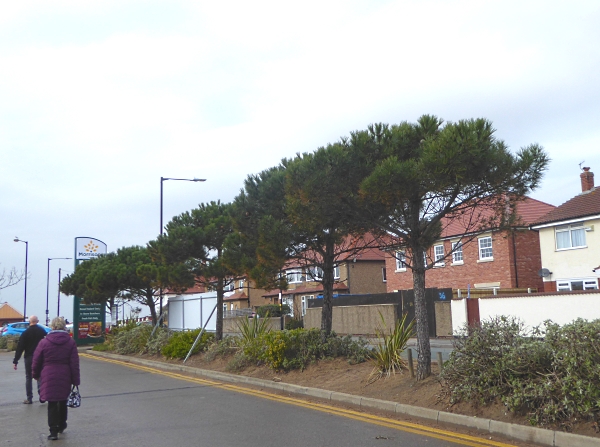 While Margaret and I were looking at the pines, the others were watching a Buzzard overhead, being mobbed by half a dozen Jackdaws. 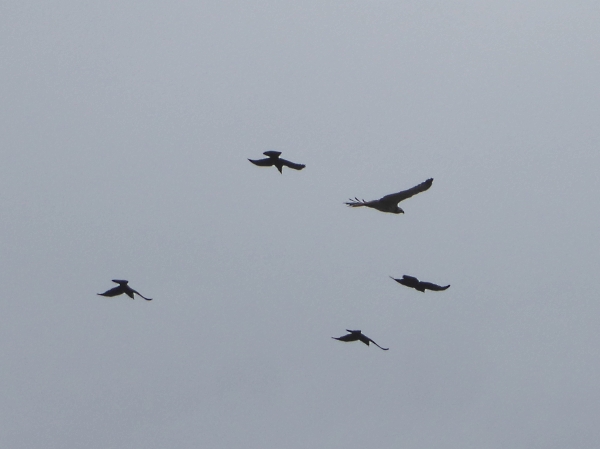 We went into Sandlea Park for lunch. The Magpies were nest-building, a Robin serenaded us and three male Blackbirds kept to their own patches of lawn, occasionally having spats near the borders of their territories. 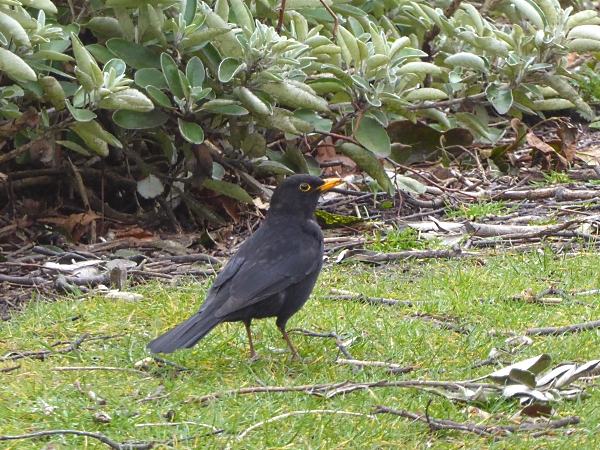 The park had a Irish Yew, the normal dark green one, not the golden cultivar. They are supposed to be all female, but we saw no berries on it. At the north end are three Cedars. One was definitely a Blue Atlas Cedar, another was definitely a Deodar. What was the third? Had someone planted a Cedar of Lebanon there to complete the set? I think it was probably another Deodar, but it wasn’t very droopy. There were several old Silver Birches there too, but they are a short-lived tree, and unlikely to be as old as the park (pre-1900). On a dead Buddleia twig was some Judas’ Ear fungus. 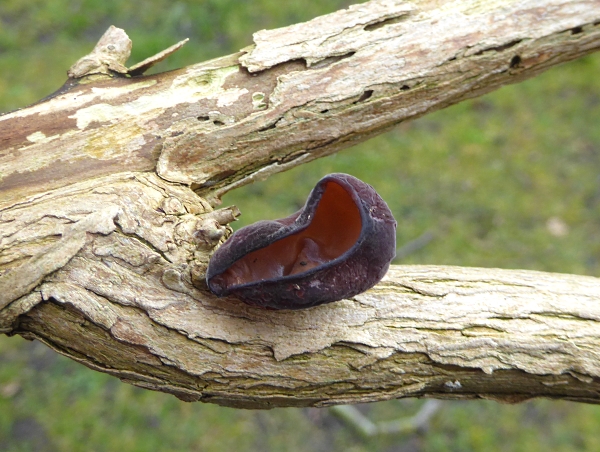 The massed purple Crocuses were wonderful. 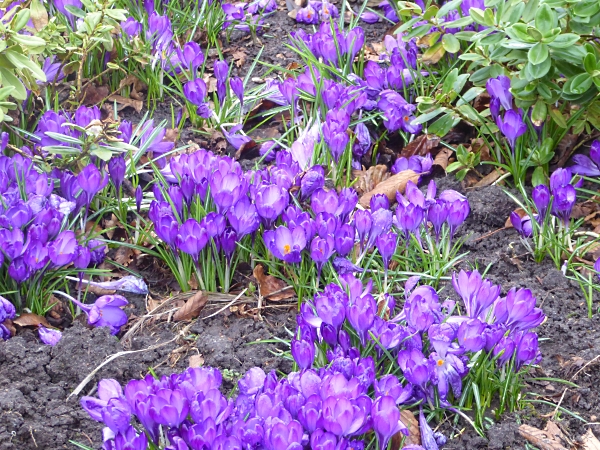 Many of the trees there are Common Walnuts. No leaves are out yet, but there were lots of gnawed-open shells in the litter beneath. What ate them? My Hamlyn Guide to Animal Tracks and Signs says it is Grey Squirrels which gnaw one end of a nut then split the shell neatly in two. 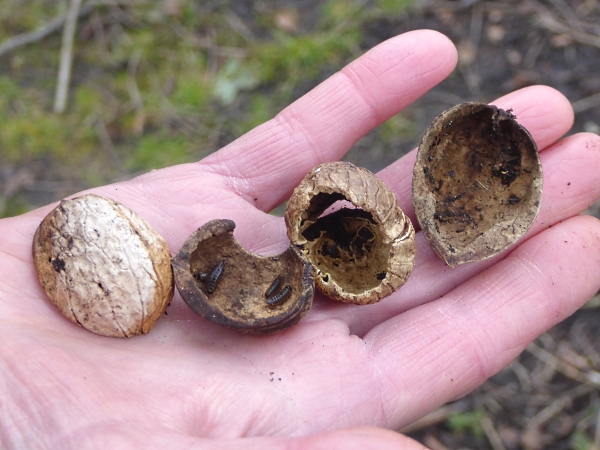 After lunch we walked up Grange Hill to look at the big Stone Pine in a magnificent position near the corner of Black Horse Hill. From the right angle it overlooks and frames Hilbre Island. 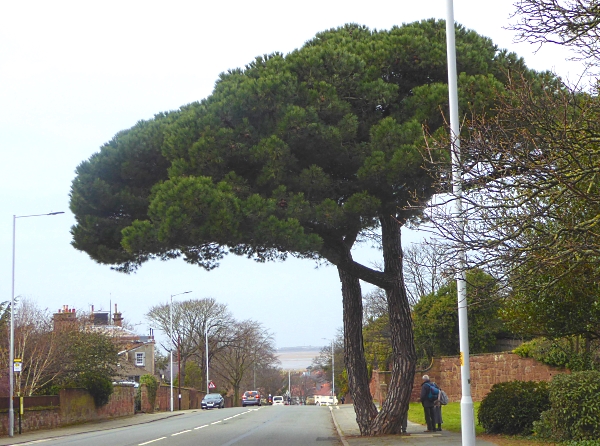 It’s a Mediterranean tree, uncommon this far north, and is the source of Pine Nuts. It is listed as one of the Great Trees of the Wirral.  The cones are quite big, and I wonder … were those four young pines outside Morrison’s also Stone Pines, planted in some sort of homage? Mitchell says the cones of Stone Pine have “smooth scales with rounded ends and roughened grey or red-brown centres from which radiate five fine folds”. Here’s a cone on one of the supermarket trees, and it appears to match that description. 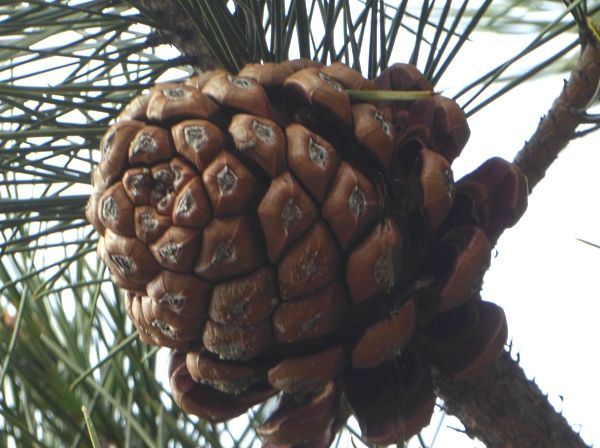 On the grass near the Stone Pine on Grange Hill was a single flower of Lesser Celandine and a clump of flowering Red Dead-nettle. Flowering Currant bushes were just starting to bud in the gardens, but this Quince was in lovely crimson bloom. 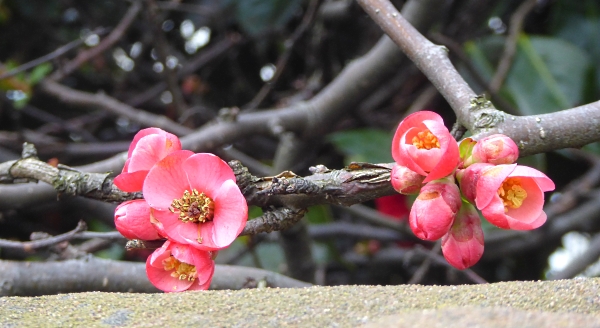 Part way down the hill is a sheep field with many low lumps and bumps. Are they the hills of Yellow Meadow Ants? 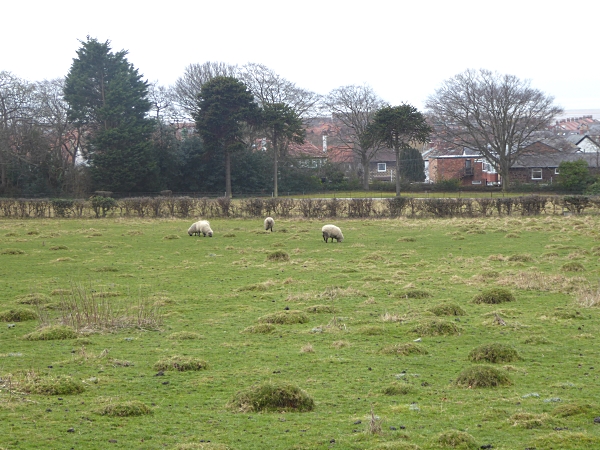 We headed along Carpenter’s Lane to Ashton Park. The lake held only Mallards, Canada Geese, Black-headed and Herring Gulls, and a couple of Coots building nests. There are lots of Mallard nesting boxes on the island. 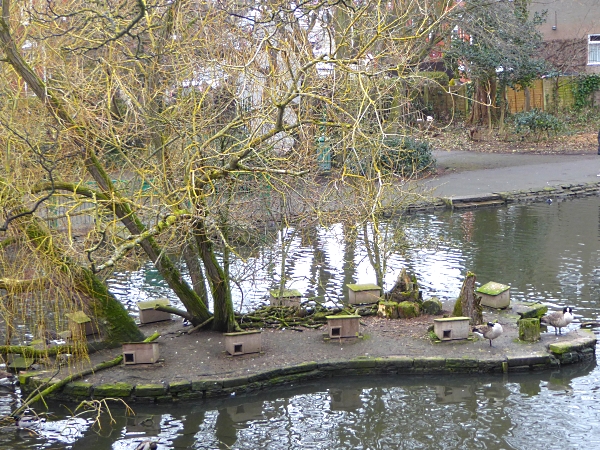 We returned to West Kirby station along the last bit of the Wirral Way, where a Wren darted across our path. On our outward journey this morning, we had seen three Little Egrets in the horse fields between Moreton and Meols, or was the bird standing right by a horse’s feet really a Cattle Egret? We looked more closely on the way home, but decided that all three were Little Egrets.