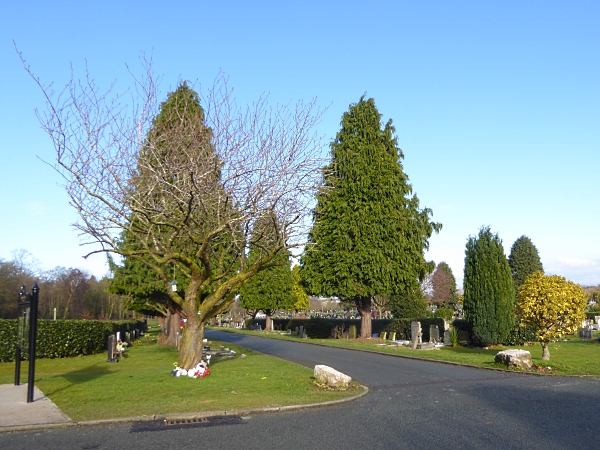 It was a brilliantly bright and sunny day, but an overnight frost had made the pavements very slippery. We went to Landican hoping to see Hares, which we have seen there before, but not today.

We did rather well for trees, though. Cemeteries always have elegant and architectural evergreens. The first one we looked at made an avenue of tall, neatly-conical trees, which were clearly some kind of Cypress, with droopy, feathery leaves and small cones. I’m pretty sure they were Lawson Cypress, Chamaecyparis lawsoniana. See top picture for a couple of examples of them. There was also a dense hedge of Leyland Cypress and a Common Yew by the bus stop. Our third Cypress was the one I think of as “the sticky-out one”. The trunk looks like several thick ropes twisted together, and the cones are over an inch long. It’s a Monterey Cypress, Cupressus macrocarpa. 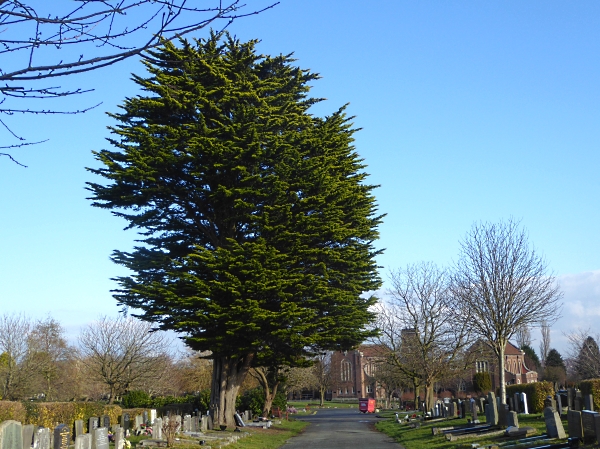 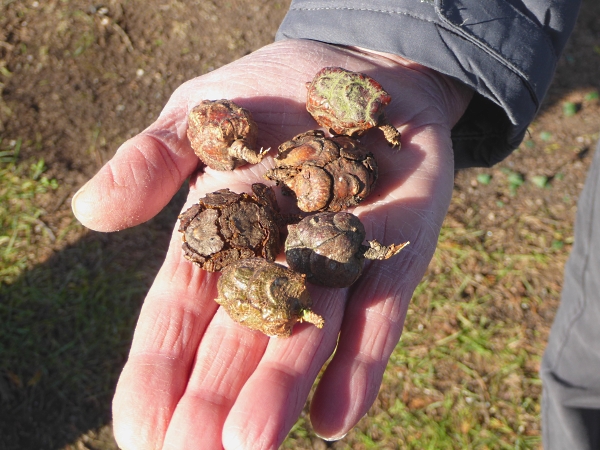 Most of the birds were tucked away, keeping warm. Greenfinches were calling from deep in the  evergreens. Blue Tits, Great Tits and Chaffinches made occasional appearances in deep hedgerows, but there were lots of curious Robins flitting about. We never saw more than one Magpie or Wood Pigeon at a time, and there was a lone Black-headed Gull poking about on the grass, showing its dark head feathers coming in.

Although the deciduous trees have no leaves at this time of year, many were easily identifiable by bark, fruits and catkins. The Hazel was a no-brainer, with its delicate yellow catkins. 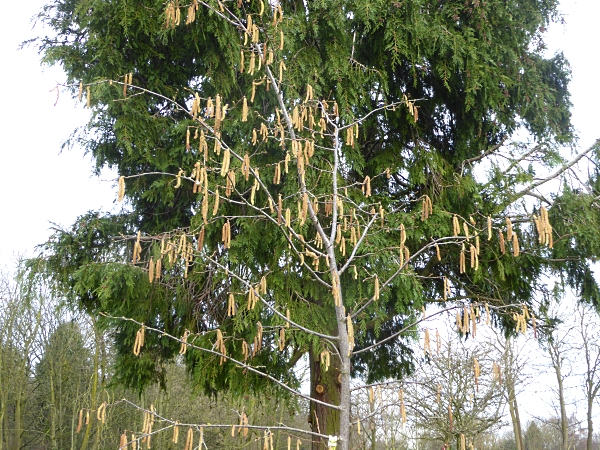 There were Silver Birches with their distinctive bark and thin pendulous branches. The skyline held several rows of classic tall Lombardy Poplars. Both types of Alder were frequently planted. The ordinary Common Alders Alnus glutinosa have small cones and purplish catkins next to them. 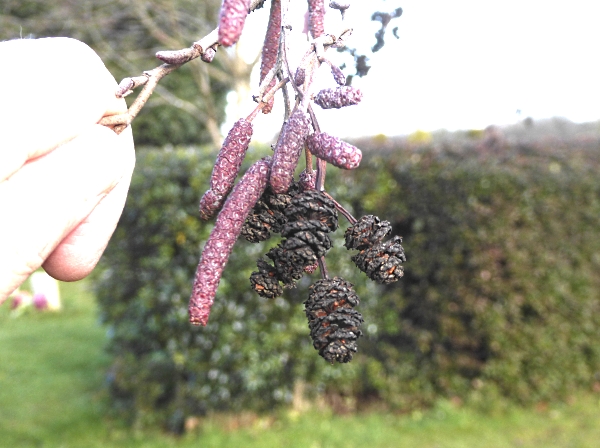 The Italian Alders Alnus cordata have far bigger cones, about an inch long, which seem to fall more easily. 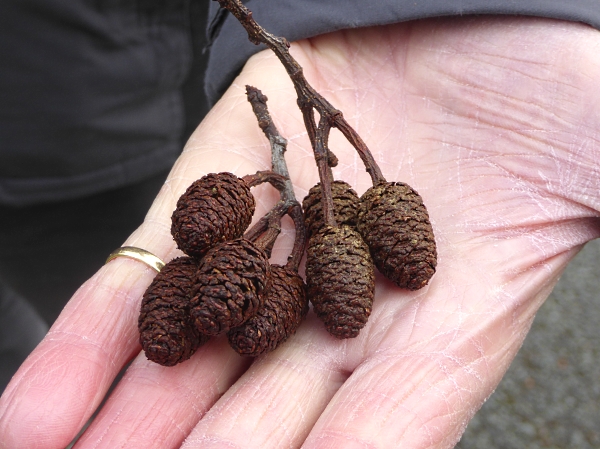 Plenty of Golden Irish Yew stood at the crossroads. They have yellow-edged leaves and are all male, with well-developed pollen sacs. 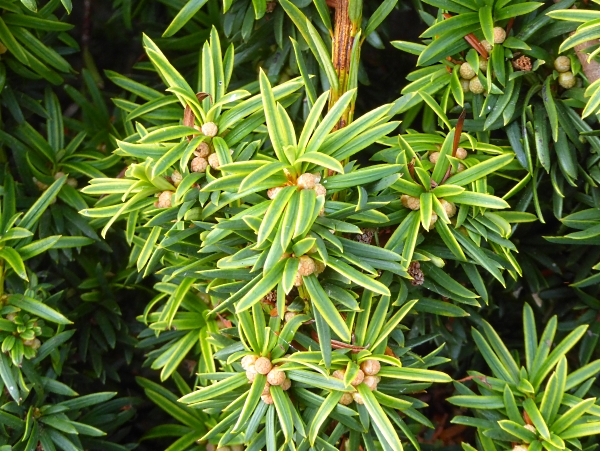 And the London Plane tree is easy to spot by its patchy patterned bark and hanging “bobble” fruit. 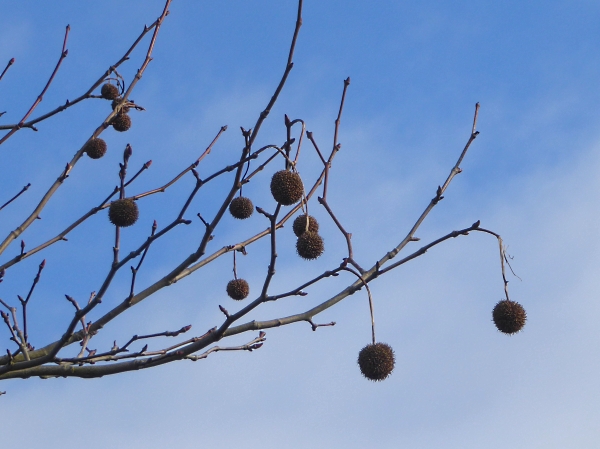 After lunch we headed down to the south end, where there were still no Hares, but long lines of molehills everywhere. (We allow ourselves to count them as a mammal sighting!) There was also a Grey Squirrel scampering along a horizontal branch. That area is the newest part of the cemetery  and we were interested to see they are planting many unusual young trees there. Some still had their labels on – Cut-leaved Alder Alnus glutinosa ‘Imperialis’; Golden Alder Alnus incana ‘Aurea’, (a cultivar of Grey Alder); and two varieties of Crab Apple, Malus hupehensis (white blossom) and Malus ‘Mokum’ (dark pink blossom). I suspect it’s cheating to identify trees by the nursery label, not by their features, but I intend to count them on our year list anyway!

A pair of Buzzards soared against the blue sky, calling to each other. They were being harassed  by a Carrion Crow. At the eastern edge is a woodland area, provided for scattering ashes. Snowdrops and yellow Crocuses were blooming delicately under the trees. 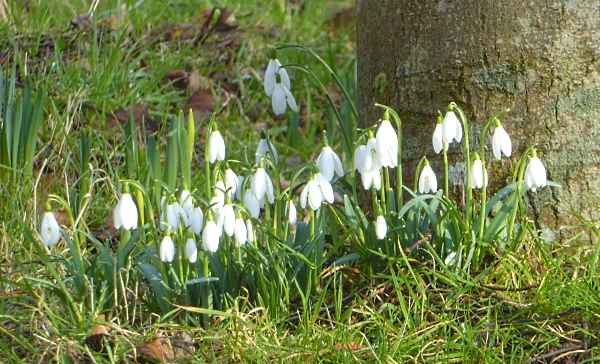 Huge numbers of bird boxes were attached to the trees, all with nameplates for loved ones. Some trees had as many as four boxes crowded together, while in a quieter corner was a three-room Sparrow hotel. 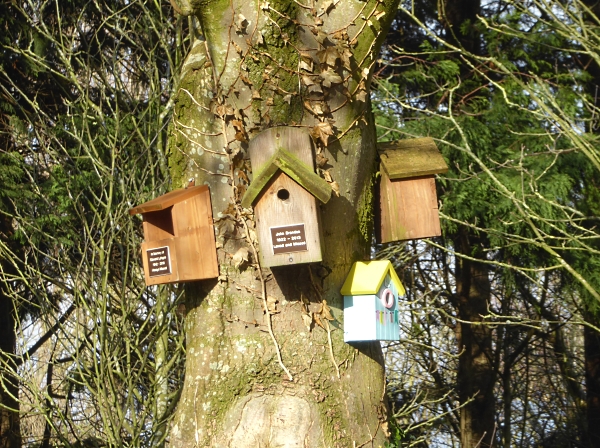 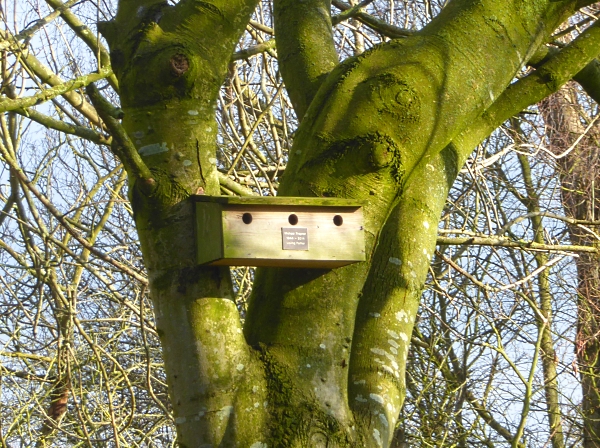 As we left we spotted this striking young orange-twigged tree. I think it’s a White Willow Salix alba. The twigs are the same colour as Weeping Willow, which is the weeping variety of the same species, and much commoner. 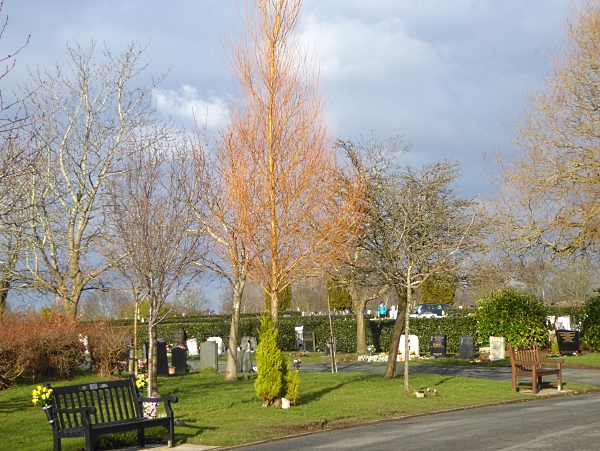