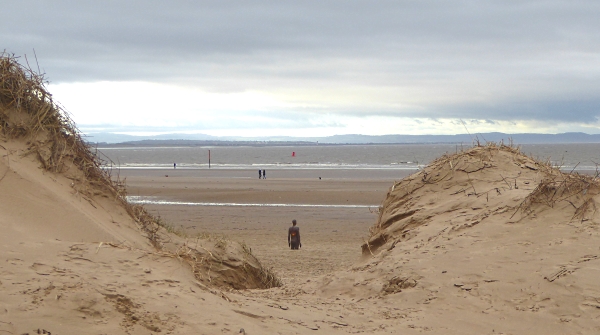 Another bird hunt today, for a Snow Bunting reported near Crosby beach “in the field at the bottom of Harbord Road, with Skylarks”. So off we went to Waterloo. We searched the specified field, but no Snow Bunting. There were lots of Black-headed Gulls on that field, with two Lesser Black-backed Gulls which might have been of the dark “Baltic” variety. Also a single Common Gull standing alone, as they so often do. A flock of Oystercatchers flew in, peeping as they landed. We headed up past the Boating Lake to Crosby Prom, delighting in the first Skylarks singing overhead, which occasionally landed. 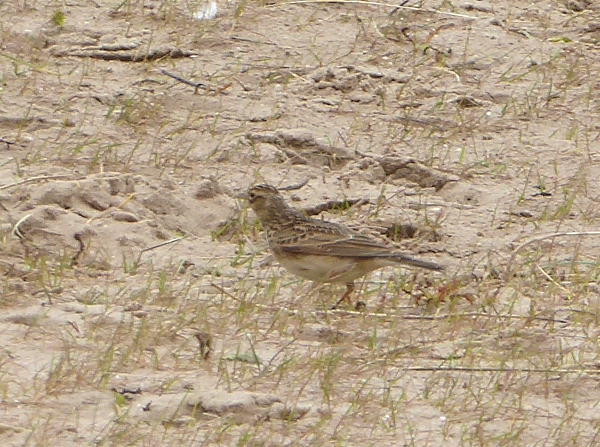 There is a warning sign put up by the council about chunks of decaying Palm Oil that have been washing up on the beach, supposedly from a shipwreck far out to sea. 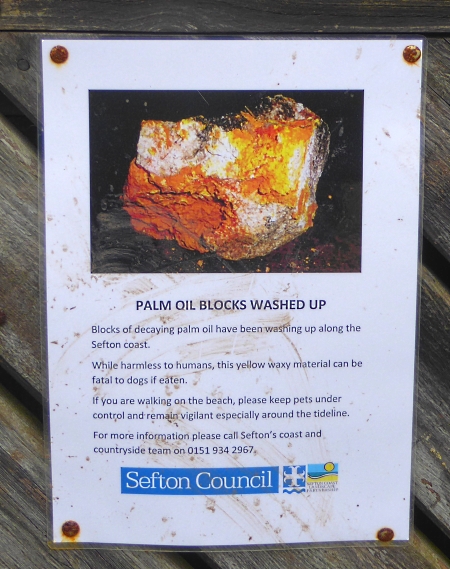 The gusty wind blew sand into our faces, so we didn’t linger near the beach for very long. Just inland we spotted a pretty little white horse, about the size of a Great Dane, which was out for a walk on a lead. The Boating Lake had the usual Coot, Mallard and Canada Geese, with a few Tufties further out. 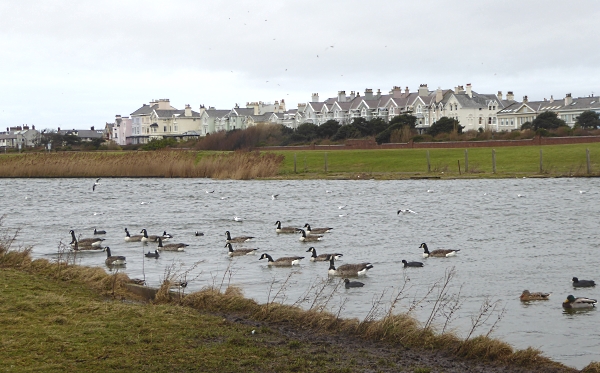 We retreated from the wind into Crescent Gardens. There were Daisies in flower, and the odd Shepherd’s Purse hanging on from the autumn. The shrub Laurustinus was also flowering, as was the Rosemary in the central herb garden. The undergrowth had been cleared around the bases of the decorative Holly trees, and we could see how vigorously they throw out suckers. We lunched there, with a threatening sky over the seafront houses. 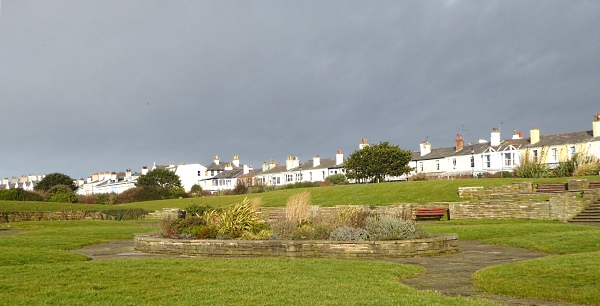 In the southernmost Marine Garden the Silk Tassel Tree was blooming, throwing out its long catkins. There were surprisingly few tassels, though, in comparison to other years, when the tree itself had been almost obscured. The red flower of Quince were coming out, and the unripe Figs were about as fat as they will ever get in this climate. There is a wonderfully-shaped Holm Oak there, one of the best on Merseyside. Apparently the people who live opposite say it spoils their view and they want it trimmed. Perish the thought! 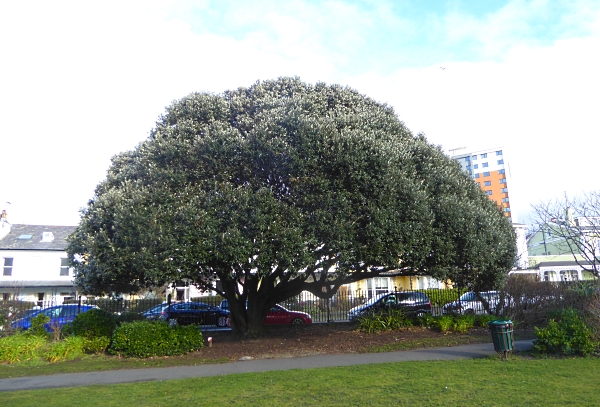 Sefton Council have put up another sign on the garden gate, warning that Rats are increasing in the gardens, possibly caused by residents putting out food for the birds, although they also say that litter and rubbish partly contribute. Baiting stations have been put out, and the Council are appealing for people not to provide them with “bird” food. Along a sunny wall the leaves of Daffodils were pushing up, with a few buds. The Daffs are already out in Greenbank Park, apparently.  One tree with copious thick leaf buds caught our eye, but we weren’t able to identify it. Tamarisk? I’ll have to keep an eye on it. Above the rockery the Crack Willows were stretching their orange twigs up to the sky. 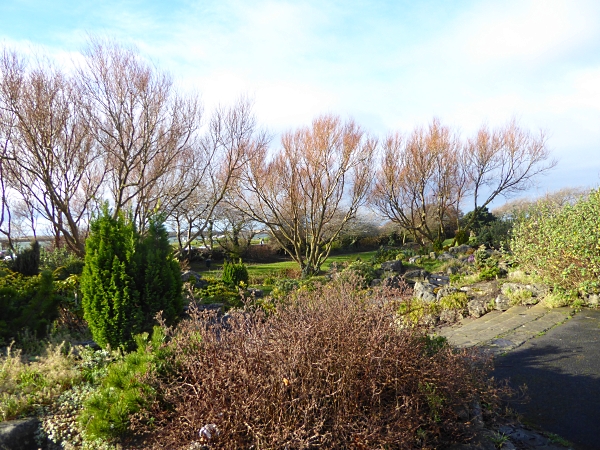 We headed back northwards through all four gardens. In Adelaide Garden there were crimson berries of some kind of Berberis and our first Snowdrops. 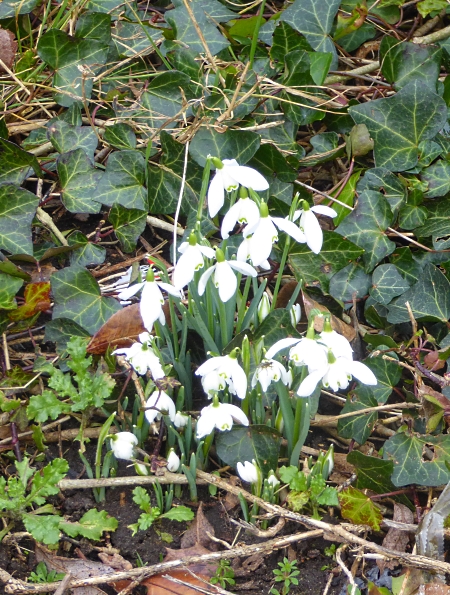 The Friends of the gardens have recently replaced the old Toposcope, with a compass rose and lines indicating the direction and distance of various landmarks. There are the expected Blackpool 22 miles, Great Orme 35 miles, Snowdon 52 miles, but also the surprising Waterloo Belgium 369 miles, Waterloo Sierra Leone 3161 miles and Australia 9490 miles! 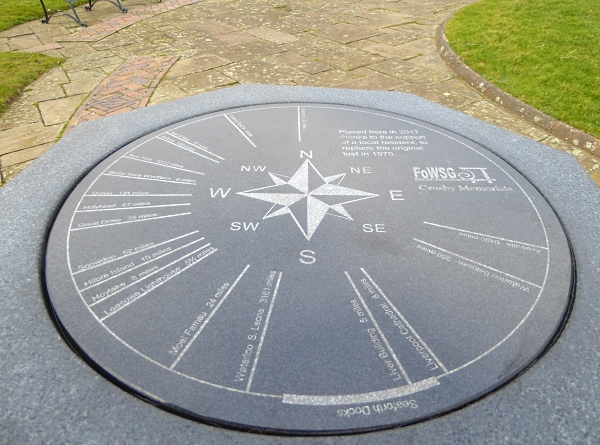 We checked the recently-cleaned pond in the northernmost Beach Lawn garden, hoping for frogspawn, but no luck. Our last scan for the Snow Bunting was fruitless, too. But not a bad day by any means – this time of the year it’s easy to add new things to our lists, so we had five new birds and seven new trees.