A rather soggy and cold start to our MNA Coach Trip programme of 2018. The first port of call was Holyhead – parking the coach just along from Holyhead Maritime Museum we quickly zipped up fleeces and donned waterproofs before scanning the main harbour. Patience was rewarded for many members who kept their eyes peeled for movement on the water – birds tantalisingly appearing for a few seconds before diving again beside the harbour buoys. We viewed a Great Northern Diver, a few Red-breasted Mergansers, a Great Crested Grebe, Shags and at least two Black Guillemots – one in ghostly winter plumage and another noted by Hugh and co. sporting dapper black summer plumage with white wing patches. On the grassy slope beside the harbour were a group of Oyks and Redshank. We wandered along stopping to watch a Peregrine in the distance above Breakwater Quarry, past the yachting marina and climbed the narrow lane beside a dilapidated hotel. In the lane edges was flowering Winter Heliotrope Petasites fragrans, and in the lane wall was the characteristic round leaves of Wall Pennywort Umbilicus rupestris. 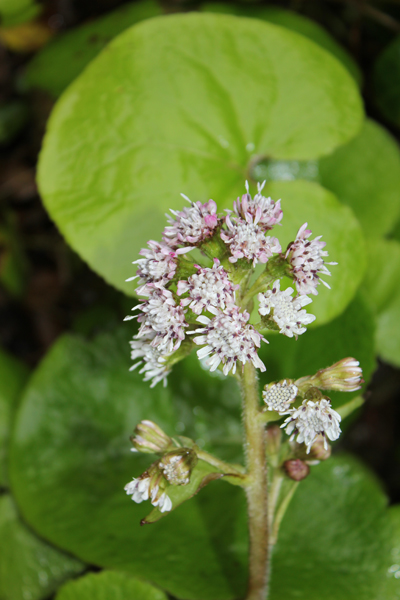 We noted the yellow-green flowering umbels of Alexanders Smyrnium olusatrum – an edible plant which has been naturalised in Britain since the days of the Romans. Some of its leaves were infected by the Rust Fungus Puccinia smyrnii. 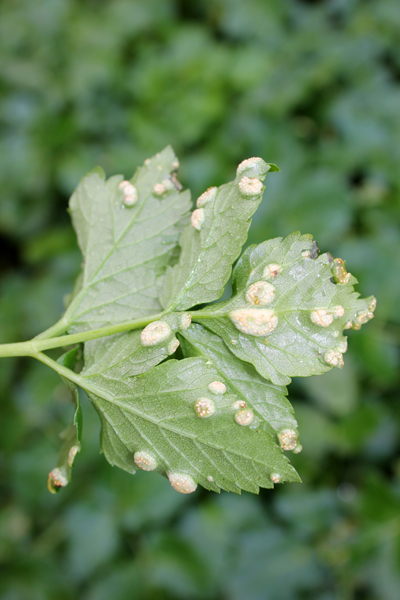 Some of the Tree branches in the lane were covered in Lichens mainly Old Man’s Beard Usnea sp. and the Strap Lichens Evernia prunastri and Ramalina sp. A bit of a Geology interlude examining the twisted layers of local Chlorite Schist used as building blocks in the walls. 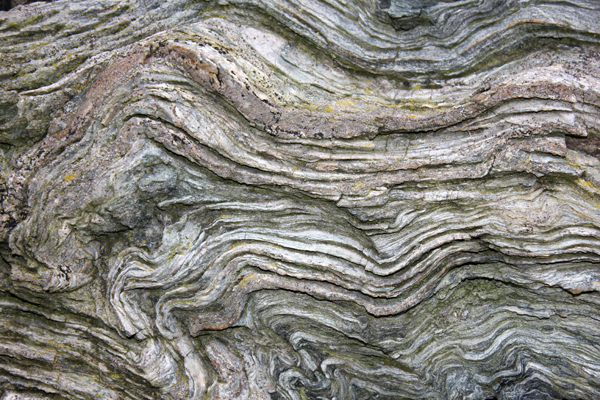 After scanning the harbour again and talking to a local fisherman who had been trying for Herring we wandered down to a cove with a fantastic storm beach – large cobbles had been tossed much further inland by recent stormy high tides than we had previously noted and the cobbles were also covered in discarded Sea Belt Kelp Laminaria saccharina that had been ripped from their holdfasts out at sea, as well as the sinistrally coiled polychaete Spirorbis spirorbis attached to Toothed Wrack Fucus serratus and a scattering of discarded plastic netting. The cobbles were comprised of the aforementioned Chlorite Schist with others being Quartzite & Jasper more typically found on Llanddwyn Island. A Turnstone and Rock Pipit kept the birders contented. 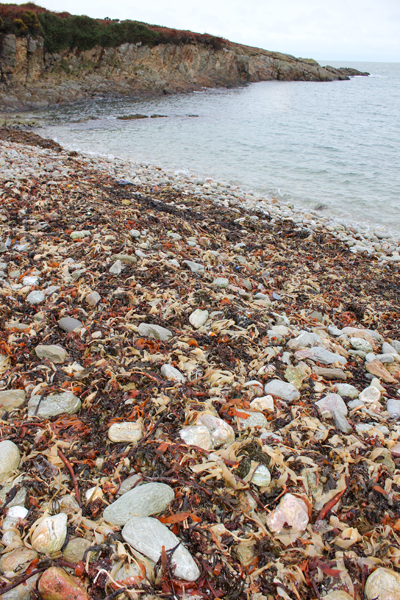 Storm Beach with washed up Kelp 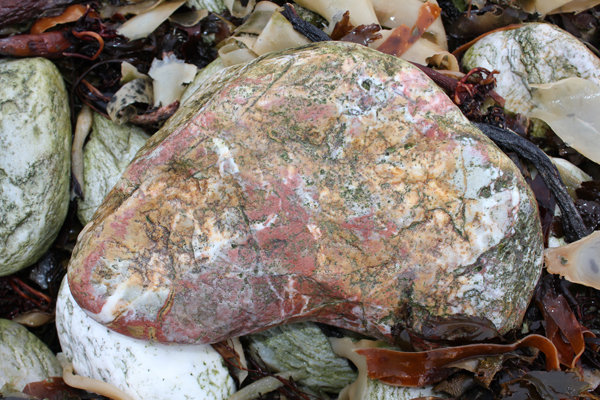 We climbed up to the open pasture area adjacent to the rocky coast leading up to Holyhead Mountain. Stonechat, Peregrine and a couple of vocal Chough proved exciting. 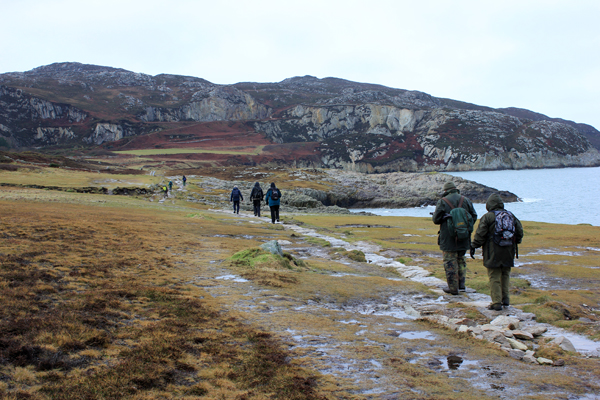 At sea were a few Cormorants and Shags with passing Oyks. The Welsh Mountain ponies came over to say hello – Les Hale becoming their friend for life with tempting polo treats. 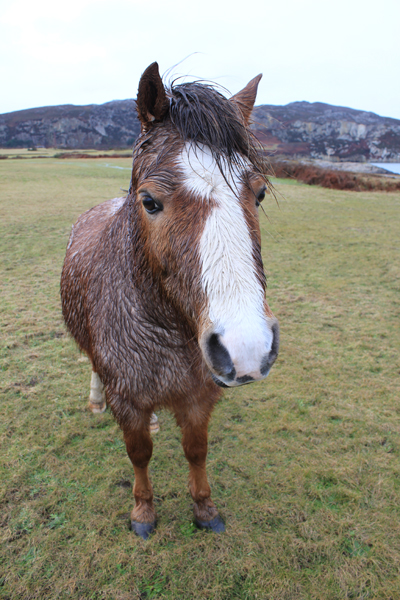 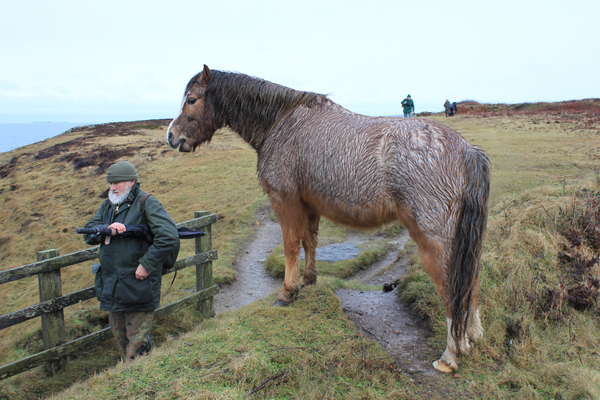 Thanks for the polos Les! 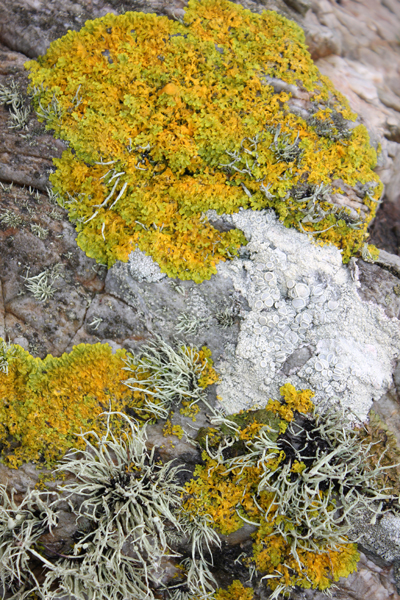 Robins, Prunes, Blackbirds, and Song Thrush put in an appearance as we neared the visitor centre with Moorhen, Mallard and a selection of Gulls on the small pond. Jackdaws were vocal on the quarry face and a Raven who had come to the end of its tether with their mobbing turned the tables and dived bombed them a couple of times. We ate lunch in the small visitor centre – the only Marine Life in the small aquarium being a Shanny a.k.a. Common Blenny Lipophrys pholis. Wandered back towards the coach a flock of Starlings overhead and a pair of Stonechat hopping around on the ground in a field in front of the Magazines – the two buildings that were used to store the black powder that was used to blast the rock in the quarry and the ammunition for the fog gun.

We boarded the coach for the short hop around to the old fishing harbour in Holyhead. Another Great Northern Diver, a couple of winter plumaged Great Crested Grebes and a Red breasted Merganser were noted. Some old containers on the quayside had a covering of dead Barnacles – a type of Acorn Barnacle Balanus balanus with steeply conical shell with prominent longitudinal ridges. 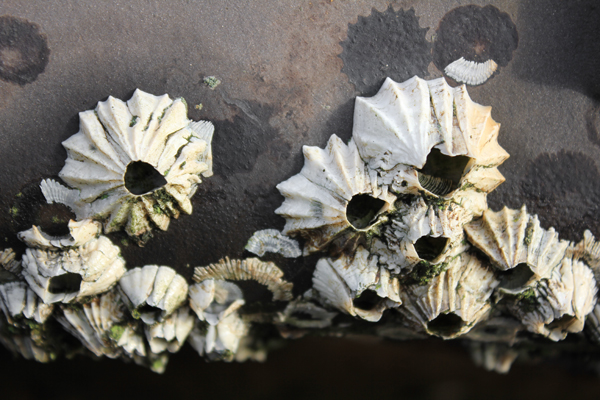 We continued along to Penrhos Coastal Park beside Beddmanarch Bay. The sun had put in an appearance but it was bitterly cold with the breeze. However the birding more than compensated with Pale-bellied Brent Geese on the shoreline – DaveB estimating numbers at 280+, also large gatherings of Waders – scanning through we identified Knot, Ringed Plover, dumpy bodied Dunlin, a dozen or so Curlew, similar numbers of Oyks, a few Redshank plus a few Shelduck. On the far side of the water channel were dabbling Teal and Wigeon rested up on the sand. The oblique angle to the setting sun briefly caused a Herring Gull’s legs to look somewhat yellow but it wasn’t to be… A Little Egret was spotted by John Clegg as we drove along the causeway on our journey home.