A trip with DaveB, Richard Surman and Ron Crossley along the Conwy Valley. Our first stop was St Mary’s Church at Caerhun, situated on the site of the Roman Fort of Canovium, overlooking the River Conwy. The churchyard is occasionally frequented by Hawfinches. Not luck today with them although we had nice views of a pair of Redstart. We continued along the Valley to Dolwyddelan. According to Wiki the name of the village translates as “Gwyddelan’s meadow”, referring to the 5th or 6th century Saint Gwyddelan, after whom the parish church is named. 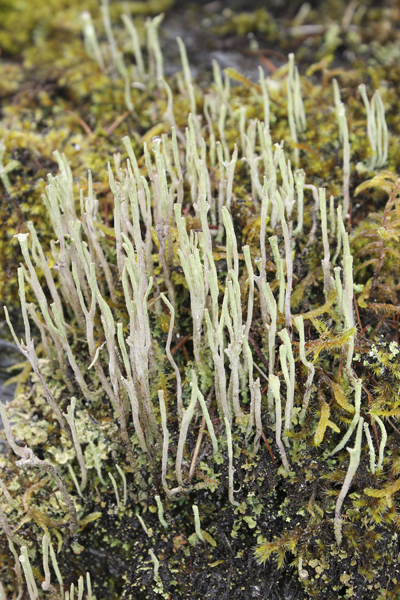 After parking beside the railway station we crossed a stone bridge that had Maidenhair Spleenwort Asplenium trichomanes, Wall-rue Asplenium ruta-muraria, Wild Strawberry Fragaria vesca, Ivy-leaved Toadflax Cymbalaria muralis and Herb-Robert Geranium robertianum growing from its mortar. We climbed along a lane out of the village, Greenfinch wheezing away until we reached the track that led into the southern end of Gwydir Forest Park. The weather was drizzly and various mosses and Cladonia Lichens were benefiting from the damp conditions. A Siskin called and landed at the top of a Conifer – a mere silhouette in the mist. The ubiquitous Willow Warbler, Blackcap and a scattering of Garden Warblers were in song. 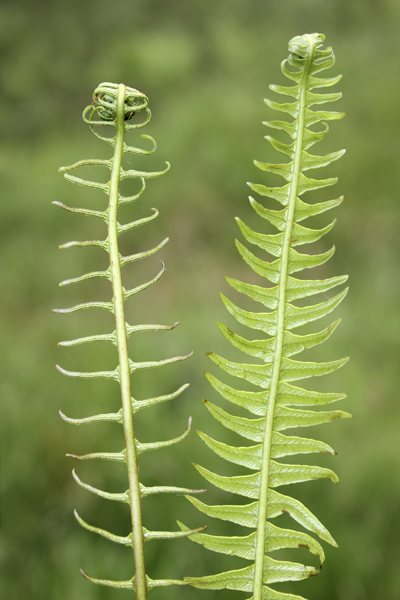 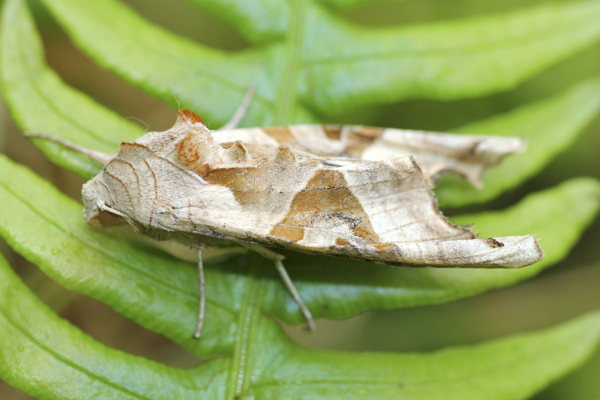 The high-pitched zee of Goldcrests came from the tops of the conifers and a couple of Redpoll were flying around. Hiding in the Bracken Pteridium aquilinum was an Angle Shades Phlogophora meticulosa and a few Snipe Fly Rhagio scolopaceus were adopting their usual down-looking pose. I took a detour down a slope to view a couple of small waterfalls and a group of Common Spotted-orchid Dactylorhiza fuchsia. A wet bank beside the track held Common Butterwort Pinguicula vulgaris – an insectivorous plant. 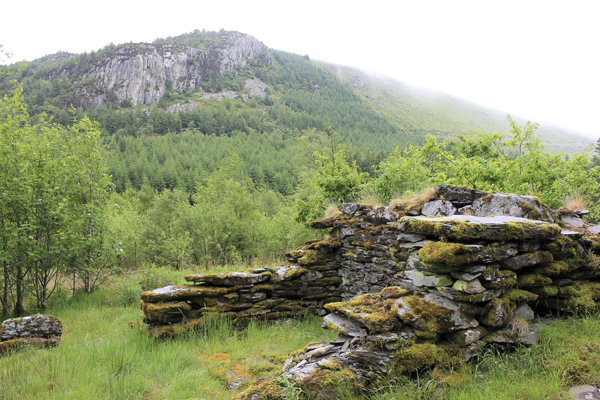 We stopped for lunch at the ruins of medieval Tai Penamnen, built by the powerful Welsh nobleman, Maredudd ab Ieuan, as his family home. Dog Lichen Peltigera sp. grew on the stonework, a Redstart was singing close by and a Great-spotted Woodpecker called. 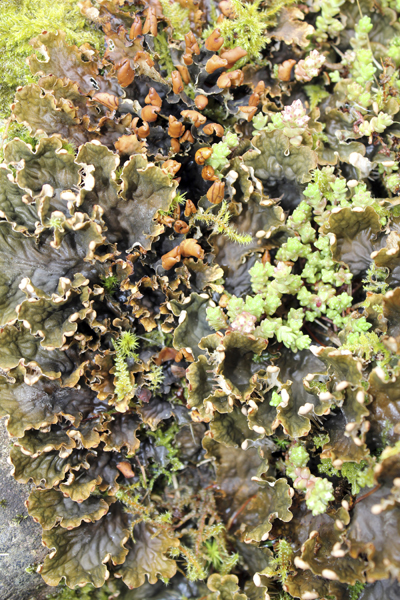 Further along the track the sun put in a brief appearance and we took a small detour and crossed a newly constructed wooden footbridge over a stream, A Buzzard circling against an impressive rocky crag reminiscent of Wyoming scenery as the backdrop. A Grey Wagtail was chasing after insects in the stream bed, a Small White Pieris rapae flew by and Richard located a Spotted Flycatcher in the streamside Conifers. 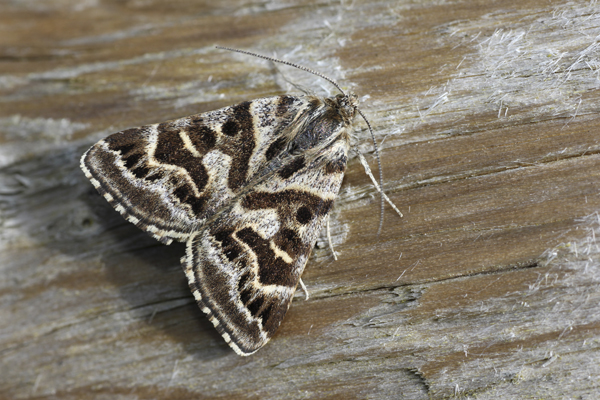 Returning to the main track we continued up the valley noting a Mother Shipton Moth Euclidia mi on a wooden fencepost and a Rove Beetle possibly Aleochara lanuginosa racing along. We then took a sharp detour off-piste up a steep track where the Forestry Commission had felled the Conifers the previous year. A Peregrine cried from further along the valley, a Raven croaked above us and a Tree Pipit performed its aerial display flight landing amongst the tree-felling debris and Conifer stumps. A Dor Beetle Geotrupes sp. plodded along until DaveB turned it upside down briefly to see whether it was infected by mites – it wasn’t. After a couple of stops to catch our breath and note the Heath Bedstraw Galium saxatile we reached the top and the drizzle started as we headed over moorland dotted with Hare’s-tail Cottongrass Eriophorum vaginatum and began our descent. 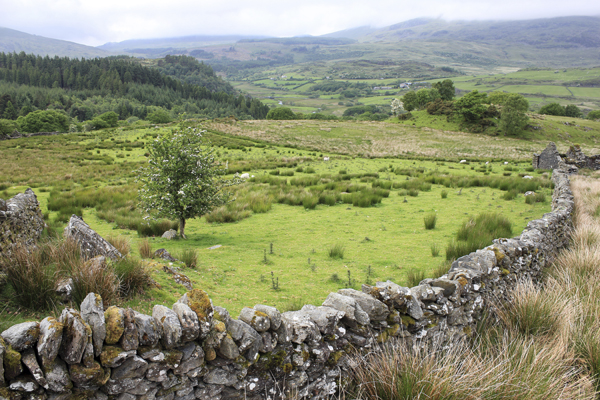 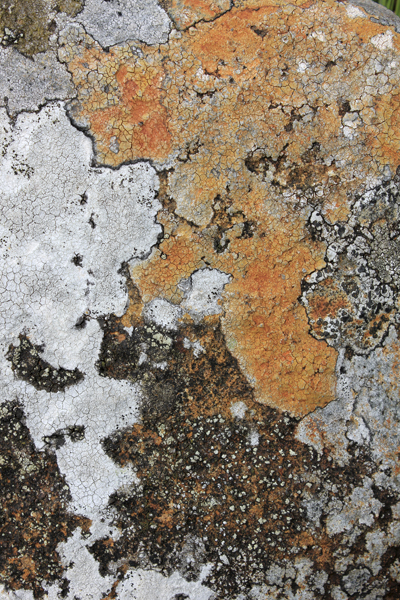 Mepits and a Stonechat were seen, I heard the bubbling call of a Curlew and we heard the plaintive call of the Cuckoo – the first of three individuals. Passing through a farm we were glad that the barking dogs were on thick chains. The typical Welsh Oak woodland it was surprisingly devoid of bird song although further along we did note a party of Long-tailed Tits, Robins, Prune and Great Tit. We continued through sheep pasture with some quite bold ewes protecting their lambs from our perceived threat. Their dung held both Coprophagous Fungi and a scattering of Yellow Dung Flies Scathophaga stercoraria. The ruins of Dolwyddelan castle looked spooky against the increasingly greying skies on the opposite side of the Afon Lledr. Gates and stiles had allowed our progress to continue over the fields but we came across a fence that barred our way and had to backtrack to find the correct route. I briefly glimpsed a Kingfisher peeping along the river.

The heavens opened and we donned waterproofs for the last leg of the walk back into Dolwyddelan – Swallows and House Martins zipping around a couple of fields festooned with Pignut Conopodium majus on the edge of the town.