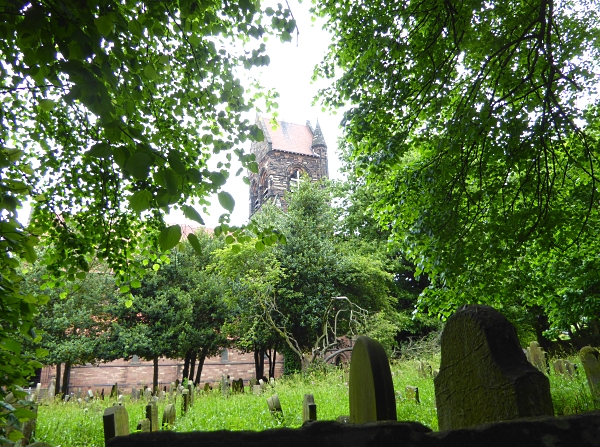 We went to Kirkby to follow up reports of nesting Peregrines on the church, but we had a good look at the trees in St Chad’s Gardens first. They have a fine young Deodar, a Laburnum arch that has just finished, a Red Horse Chestnut and one that I first mistook for a Japanese Maple, but it was an Oriental Plane, said to be rare north of the Midlands. The only other one I know of in Merseyside is on the central reservation of East Prescot Road near Springfield Park. 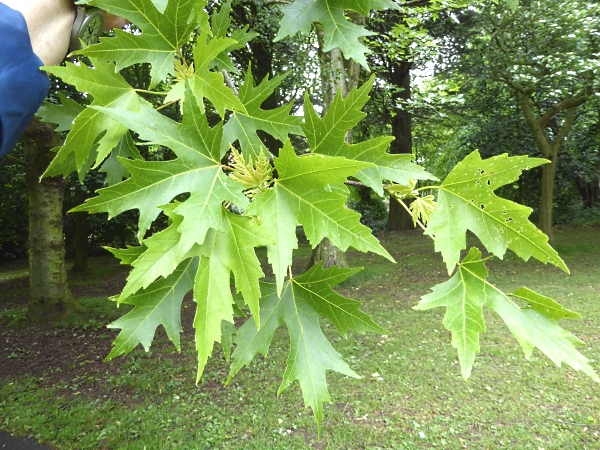 There was some sort of Lime, not sprouty at the base and showing a low graft. The leaves were glossy and papery and there were no seeds. I hoped that it was a Large-leaved Lime (worth 15 points) but it doesn’t match the book at all. It was more like a Small-Leaved Lime in features, except for the size of the leaves. These Limes are doing my head in!  We had more luck with the matching pair of youngish trees on either side of the gate. They were conical trees, no seeds, but with big alternate leaves with their stalks reddish and hairy. I think they are Turkish Hazels, which the Collins Tree Guide says are now a locally frequent street tree. 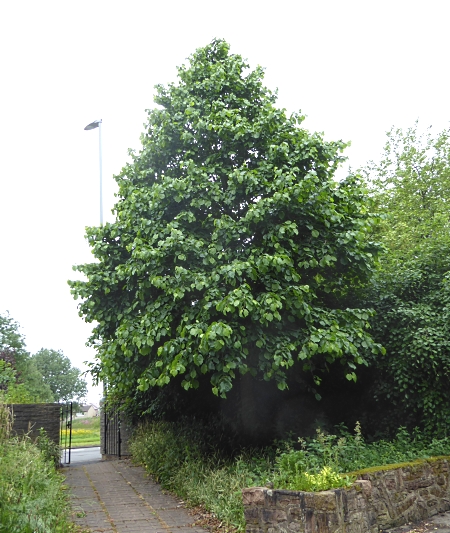 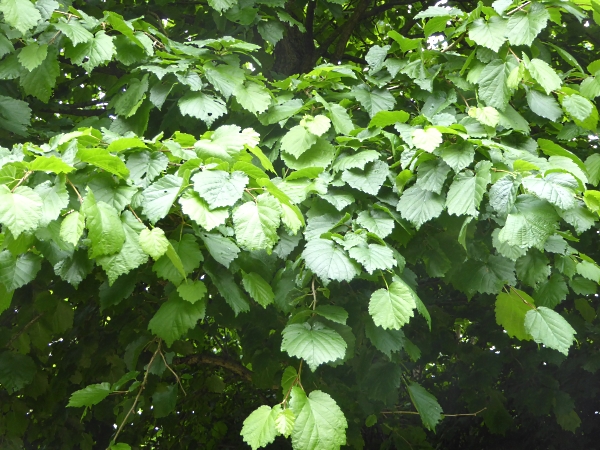 As promised, a pair of Peregrines were nesting in the church belfry. Neither of them were impressed when the church bells rang, and they flew away screeching, but one soon came back. 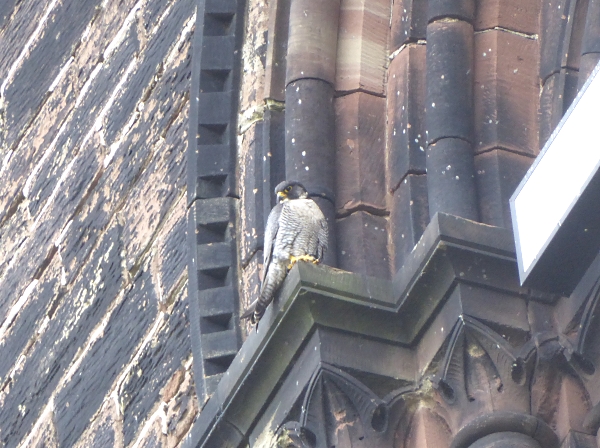 We met a local lad, who joined us in foraging for pellets. We broke open the only one we found, revealing the leg rings of a racing pigeon! 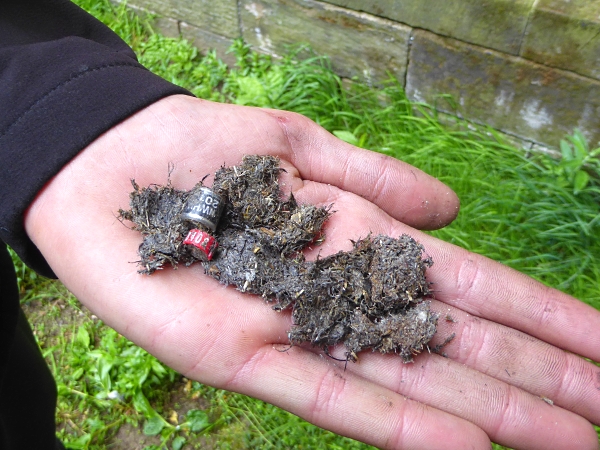 The young bird watcher also knew where all the birds’ nests were. He pointed out the tree hole which a Great Spotted Woodpecker had investigated, but was soon put off by a pair of Blue Tits who also fancied it. There is a Kestrel nest in a drainpipe hopper and he said he’d heard the chicks calling, but all we saw was a tail, and then the brooding adult flew off. The first of three Corpses of the Day was a Hedgehog, decomposing gently by the side of the path. 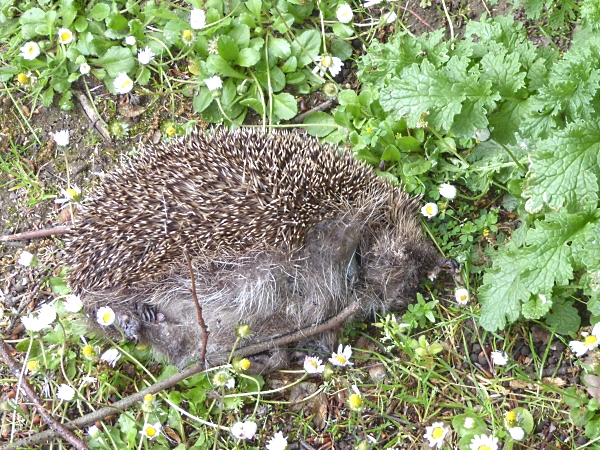 After lunch we went into the park behind the church, called Millbrook Millennium Green. A Song Thrush was singing loudly from a thicket and both Bramble and Dog Rose were coming into flower. The Guelder Rose Viburnum opulus was blooming well, but something was eating its leaves down to lace. On the undersides of the leaves were the culprits, larvae of the Viburnum Leaf Beetle (or Guelder Rose Leaf Beetle) Pyrrhalta viburni. 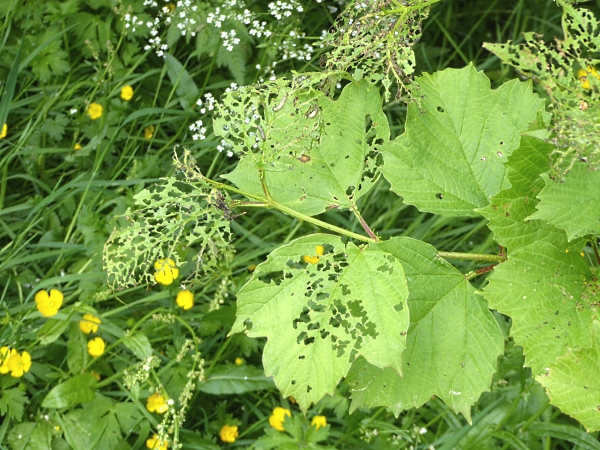 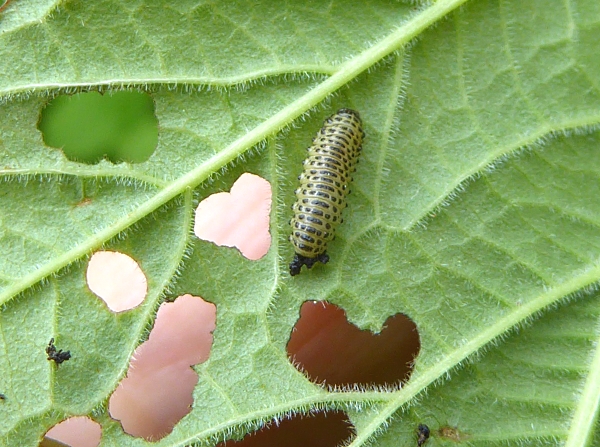 The bird-watching lad turned up again, and in his bag he had a brood of baby Blue Tits, which he’d found cheeping on the ground. Had they fallen from the nest? They had probably just fledged that morning. We urged him to take them back to the same place, where their parents could find and feed them. 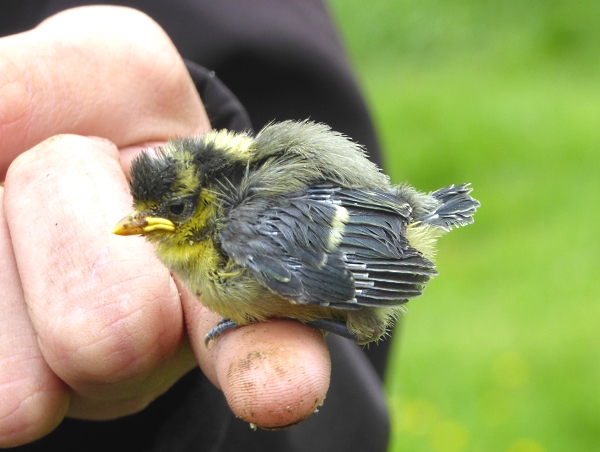 There is a little wetland there, part of the Simonswood Brook. A Sedge Warbler was singing in the reeds but we couldn’t see it. Flowers included Meadow Cranesbill, White Clover, Hemlock Water Dropwort, Yellow Flag Iris and Blue Iris. 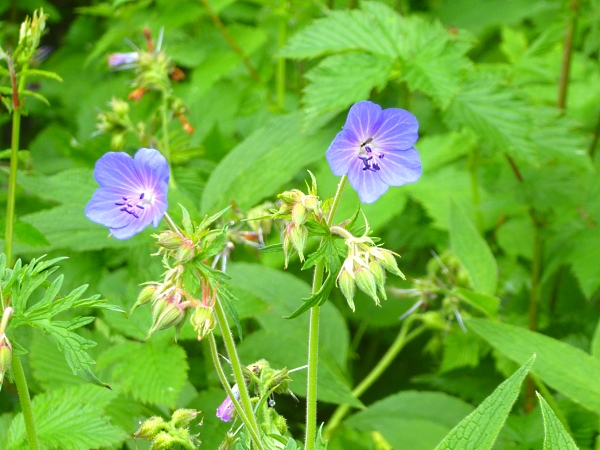 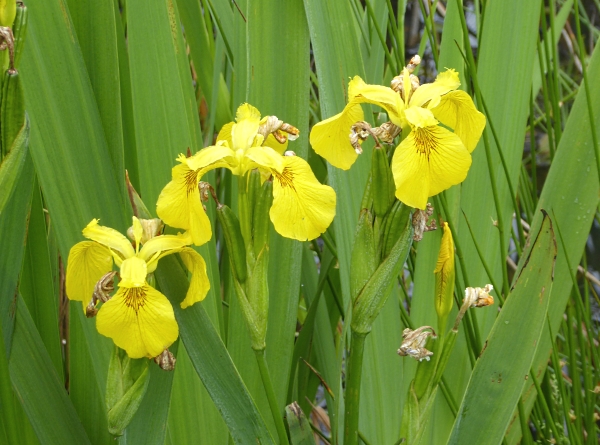 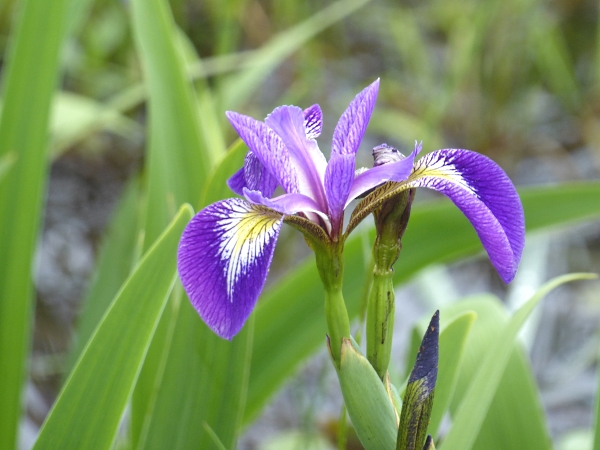 We returned for a last look at the birds on the church. There was a young Starling lying dead on the path – Corpse Number Two. Both Peregrines were sitting by the belfry louvers, listening to the sounds of the young ones inside. 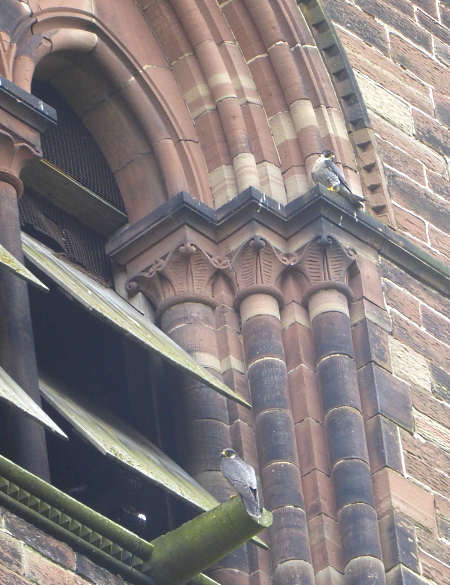 Our third corpse was a Wood Pigeon in a bus shelter in Kirkby bus station, a clean and perfect bird, but with a broken neck. We could see the imprint of its wings on the glass. Had it been chased by a Peregrine that morning, and went the wrong way in its panic? Near the bus station, more “birds of prey”, but this time they were dubious public sculpture. An artist called Geoff Wood has been allowed to set up three oversized armchairs, each with a huge pair of wings attached. The installation is called “Kirkby Thrones” and is labelled “Imagine these winged thrones giving flight to your ideas.” The white one was called “Osprey”, the dark brown one “American Eagle”, and the red-gold one “Golden Eagle”. 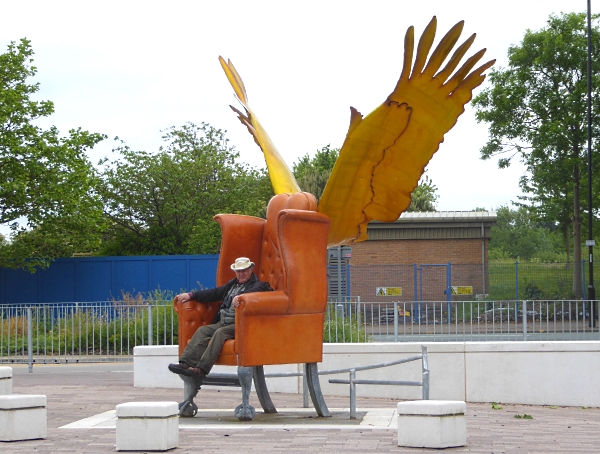 Our I-Spy points for flowers are going well. We doubled the 50 points for Freshfield’s Common Nettle to 100 because we got the question right. Q: True or False? The young leaves are good to eat. (Answer at the end).  We also got 65 points from five more flowers today, taking us to 410. There are questions on Meadow Cranesbill, Dog Rose and Bramble that I still have to ask, so we might increase to 400. We got 50 points for the Peregrine (a Top Spot) and I think John will also count the noisy Sedge Warbler, although we didn’t see it. Probably 1235 points by now. There was no advance on the tree points, still at 880. (A: True)