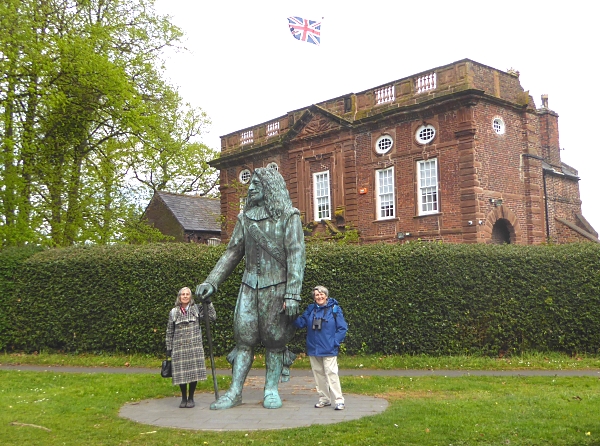 Hale village is a little bit of Old England, boasting over a dozen listed buildings, many of them 17th century thatched cottages.  Its most famous resident was John Middleton, 1578-1623, who was said to have been nine feet three inches tall and was known as the Childe of Hale. He was the servant and bodyguard of Sir Gilbert Ireland, Lord of the Manor of Hale Hall. The house below is where he lived, and the local joke is that the two little windows in the gable end were for his feet to stick out of when he was in bed. 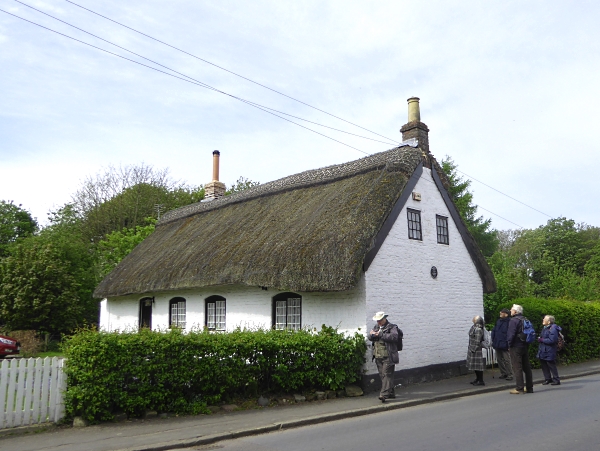 His grave is in the churchyard, with the archaically-spelled carved words picked out in white. It is protected by railings, and many sight-seers feel the urge to throw coins onto it, as if it was a wishing well. 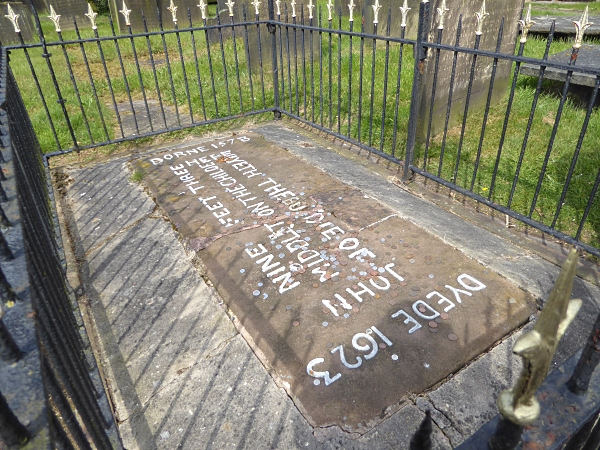 We headed past the church down towards the point. There were House Sparrows in the gardens and House Martins overhead, our first of the year. Along Lighthouse Road the St Mark’s Flies were hovering about, a Willow Warbler was singing in a tree by the kissing gate, there was a Wheatear on the path, Swallows and Skylark overhead, and a cock Pheasant was prancing about in the adjoining field. 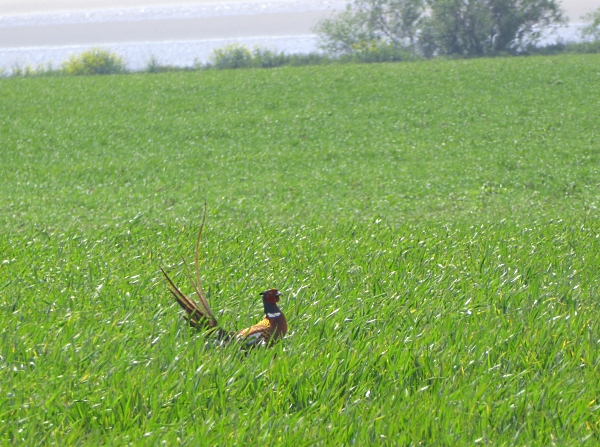 Hale Point is the most southerly point in the old county of Lancashire, but now it’s officially just outside Merseyside and part of Cheshire. It overlooks Stanlow near Ellesmere Port. The lighthouse here was decommissioned in 1958. 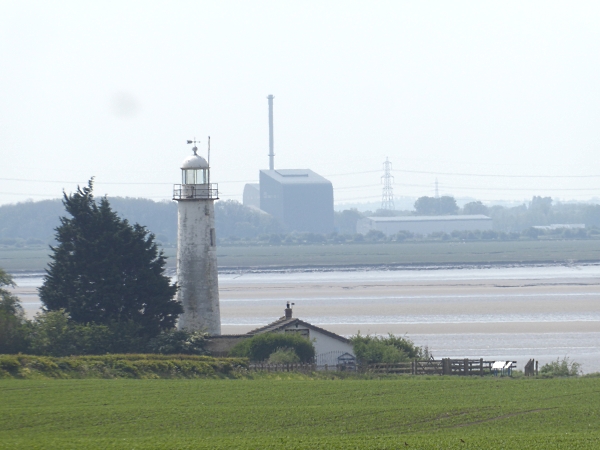 The tide was going out strongly and there was a gusty wind, but it wasn’t cold. Two Canada Geese flew in, there was an Oystercatcher at the water’s edge and flypasts of Cormorants and 20 or 30 Dunlin. A Small Tortoiseshell butterfly hunkered down in the rough grass, trying not to be blown away.  We took the path northeast around the point, and lunched on a bench opposite Helsby and Frodsham. Then we set off again around the headland, opposite Weston Point in Runcorn, with a field of oil-seed rape (which the Americans call “canola”) in bloom on the left, and the estuary to the right. It was very windy indeed, definitely blowing away any cobwebs we might have had left. 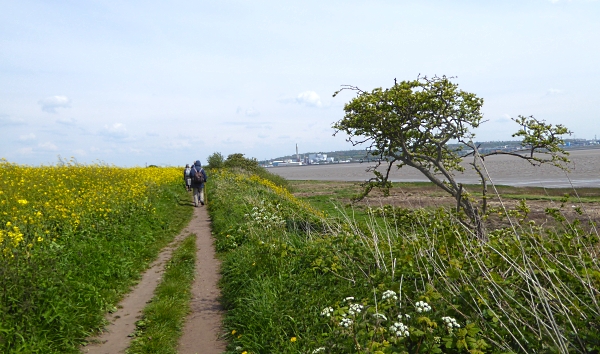 A huge dark Bumble Bee was foraging low down on a Dandelion, and she must have been a Red-tailed queen. 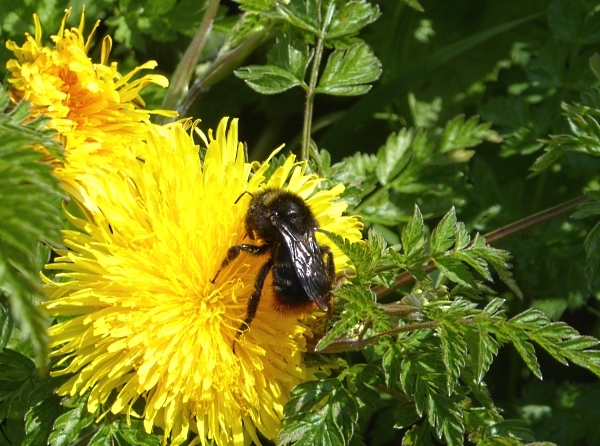 Under the edge of the bright yellow blossoms were lots of wild flowers. Does that mean the farmer hadn’t used pesticides and the crop was organic? There were masses of Speedwell and Red Dead-nettle, lots of Cow Parsley (5 points) and occasional Hogweed. Dandelions, of course, and some Ribwort Plantain. 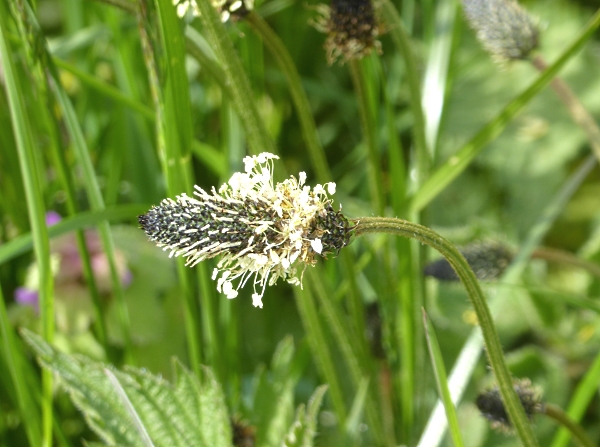 There were Canada Geese and Shelduck on the mud towards Pickerings Pasture, where we turned back to the village along Withins Way. Masses of Hawthorn were blooming, and we spotted this amazing small fly with a red-bronze reflective abdomen and thorax, which were almost phosphorescent. It had what looked like white eyes at the front and a hairy rear end. It was on a Bramble leaf. The picture is horribly out of focus, sorry, but my best attempt at identification suggests it’s one of the Long-legged flies, the Dolichopodidae, perhaps of the genus Dolichopus. 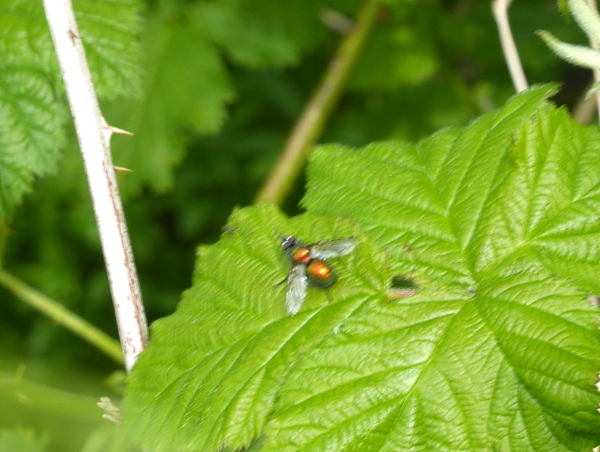 At the end of Withins Way is an interesting sign about the old ford of the Mersey that used to be there, and was still in use until the mid 19th century. In 1644, during the English Civil War, some Parliamentary soldiers attempted to cross from Weston Point to relieve Prince Rupert’s siege of Liverpool, but they were intercepted. However, later in that same year two groups of Royalist troops successfully crossed the other way, those of Lord Molyneaux while being driven southwards from Kirkham near Blackpool, and some of the defeated troops from Marston Moor, who were routed at Ormskirk and fled in confusion towards Liverpool and Hale “and so quitted the county of Lancashire into Cheshire and Wales.” Hard to imagine soldiers along it nowadays. 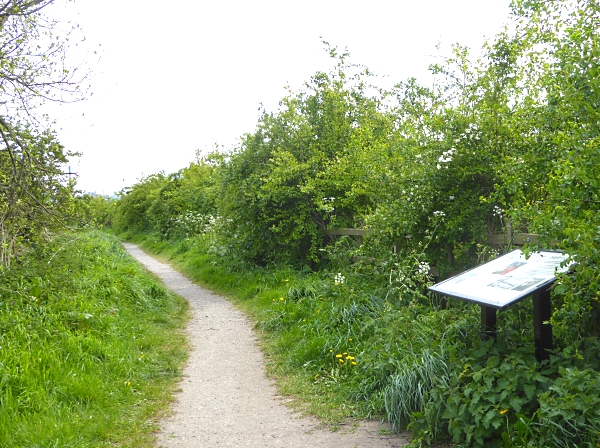 Two Goldfinches flew across the path, we spotted a Song Thrush, and a Whitethroat popped up from behind the hedge, then dived back out of sight. At the end of the path was another interesting sign put up by the BASC. It’s the British Association for Shooting and Conservation, and they say they are all for conservation of course, as they would, but look how somebody has firmly crossed out the word “conservation” on this sign. It was either a BASC member opposed to conservation and determined to shoot anything in sight, or perhaps it was defaced by a proper naturalist objecting to their claim to have anything to do with conservation. 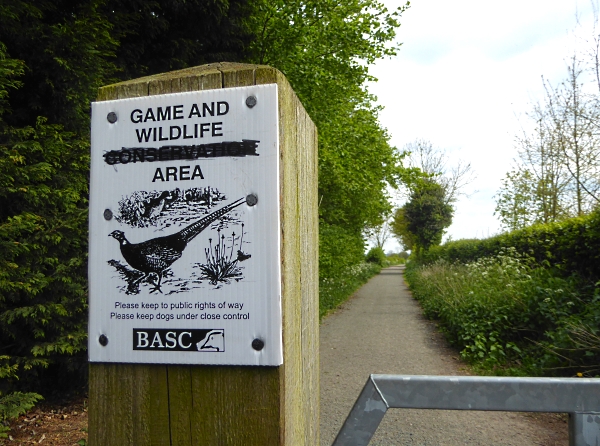 Our corpse of the day was a flattened and dried-up Hedgehog on the verge. Nearby was a surprising tree, a Japanese Larch Larix kaempferi (20 points). I know it by its light green foliage and curly cone scales. 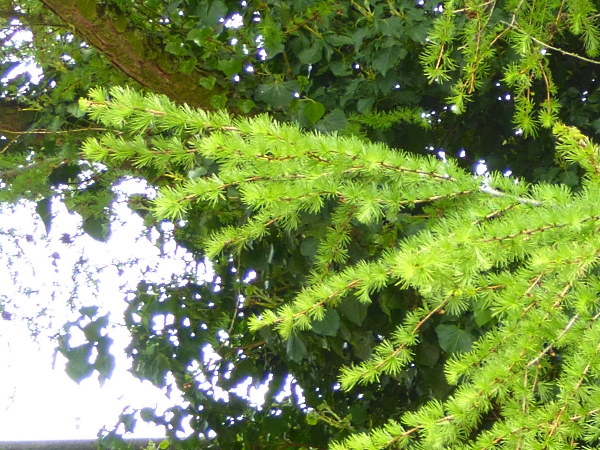 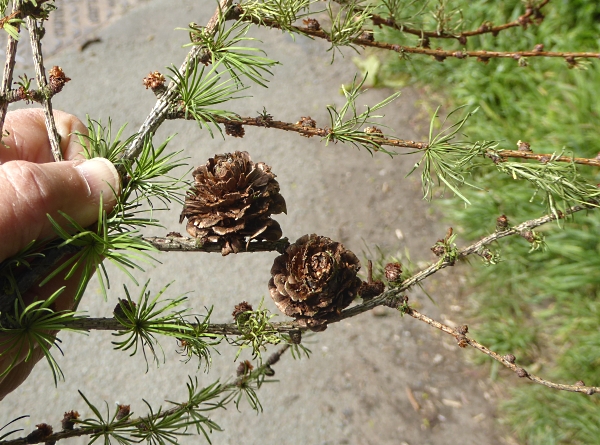 In a garden opposite the Childe of Hale pub was a Ginkgo Ginkgo biloba just coming into yellowish leaf (25 points). Right behind it was a young Monkey Puzzle and on either side of them is what I strongly suspect to be a couple of Stone Pines. They are uncommon trees, supposedly not growing north of the Mediterranean, but there is definitely one thriving  in West Kirby, not too far away, so Stone Pines are possible. Perhaps they were planted from seeds gathered on holiday. It seems to be the garden of a connoisseur, at any rate. 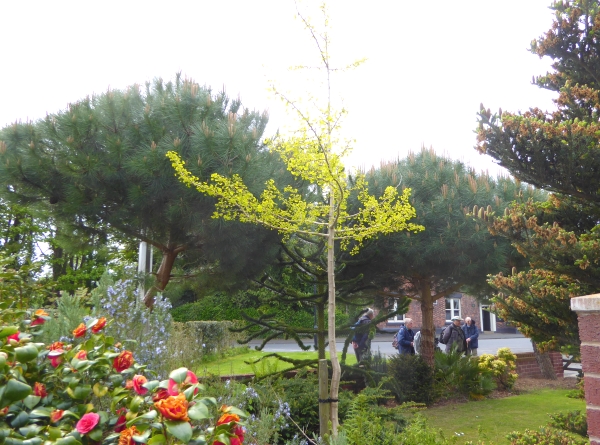 From the bus home we noted a row of over a dozen Red Horse Chestnuts Aesculus x carnea (20 points) along the south side of Aigburth Road between Liverpool Cricket Club and Aigburth Vale.
Last week I forgot to ask the questions on two of the trees we ticked. Here they are.
Wych Elm: How does this tree get its name? Nobody knew the answer to that.
Horse Chestnut: Where does the name conker come from? We got that and doubled our points from 10 to 20. (Answers at the end.) We had three new trees today, so we are up to 825 points. The only new wild flower was the Cow Parsley, worth only 5 points, so we are up to 225. John continues to collect bird points, even though we have passed 1000, and further reports to come.
A1: “Wych” is a Saxon word for “bendy”. A2 “Conker” comes from Conqueror.