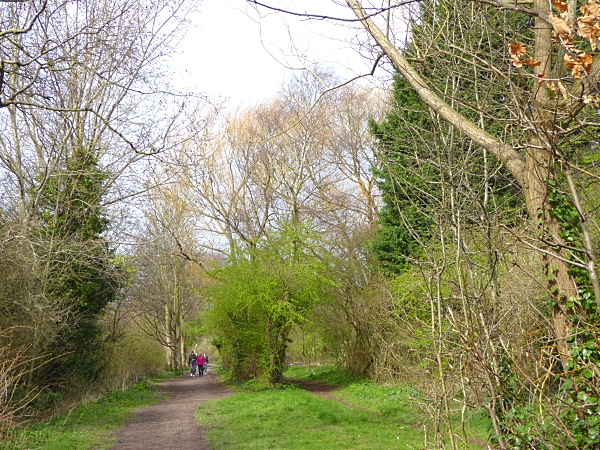 Despite the colder turn, spring is still moving forward. I love this time of year, when the distant trees show faint washes of colour – misty greens and maroons – as they start to bud and leaf. There was a grey sky when I set out, and a gusty wind, but the sun soon made an appearance. In the churchyard of St Mary and St Helen in Neston, a tree had been blown down in Storm Doris: John saw it cordoned off  a week or so ago when he was there last. He thought it might have been a big old Holm Oak, but now it’s gone, reduced to a few logs and a patch of chippings. The wind was roaring in the tops of the other big bare trees. We headed down Church Lane then northwards along the Wirral Way.  The white blossom of Blackthorn and the pale green leaves of Hawthorn are out side-by-side. 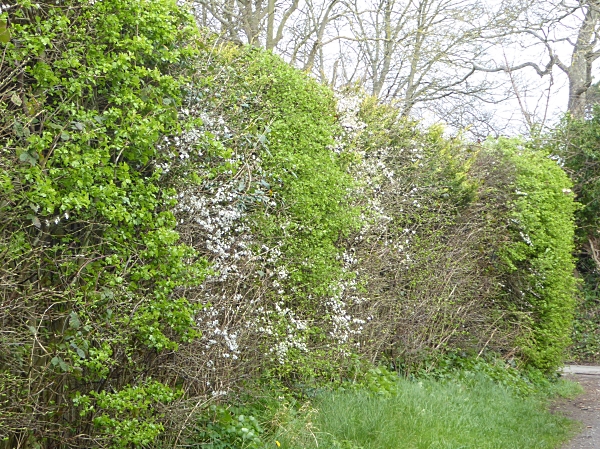 We get 15 tree points for the Blackthorn and doubled it to 30 by correctly answering the question. Q1 “What is the name of the Irish hand weapon traditionally made from a Blackthorn branch?”  Hawthorn is worth only 10, but we doubled that too. Q2  “What other names do you know for this tree?” (Answers at the end.)  We also noticed the sticky buds of the Horse Chestnut breaking open, but we won’t count it until the leaves and flowers are out. 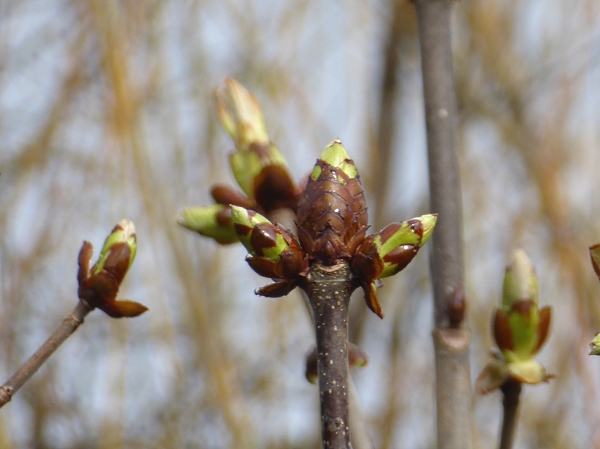 The Weeping Willows are greening and magnificent Magnolias are blooming in gardens. Many streets are adorned by early cherry blossom, and the Forsythia adds splashes of brilliant yellow. 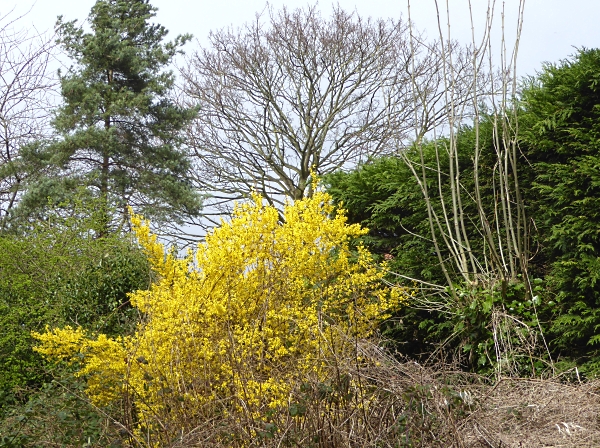 The leaves of Wild Garlic showed in large patches by the wayside, but their flowers are still just buds, snuggled well down in the heart of the plant. There was a Bumble Bee, which looked like a Buff-tailed, flying low over the verge.  She will be a fertile Queen who has just woken from her winter sleep and is looking for a hole in the ground to establish a new colony.  As we reached Parkgate there were a few spots of rain. I was quite taken with this ornate inn sign outside The Red Lion, which I’ve never noticed before. (Too busy looking out over the marsh, I suppose.) 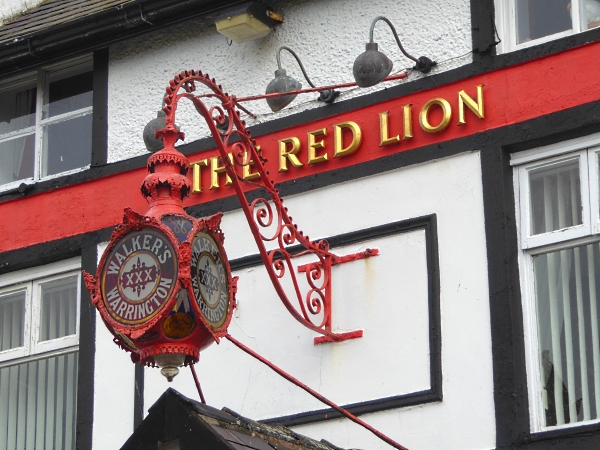 The tide was out and there were very few people or birds about. The main pool had a couple of  Oystercatchers, a few Canada Geese, half a dozen Black-headed Gulls, one Herring Gull and a  Moorhen. There were a few Teal on the far side and a Kestrel hovered over The Parade. Then a Little Egret flew in to a gully and caught a couple of fish. 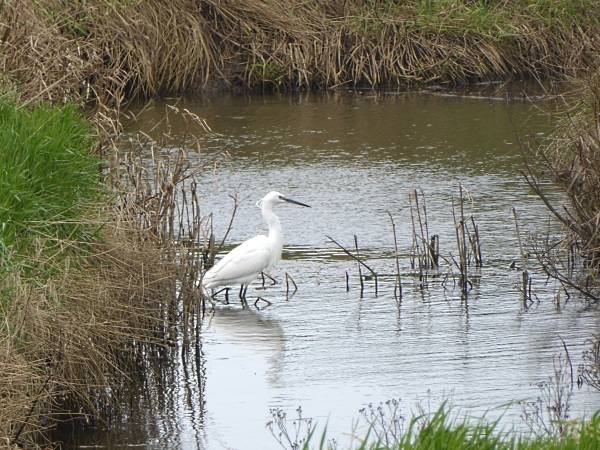 We lunched in the little garden behind St Thomas’s church, sheltered from the gusty wind. They had a pretty display of early Tulips and Grape Hyacinths, and another Bumble Bee was prospecting in the flower beds. Then we walked up School Lane, where I spotted a shrub called Stag’s Horn Sumach in a garden, with last year’s dried-up flowers still showing well, reaching for the sky like a candelabra. The I-Spy tree book has made some idiosyncratic choices about what constitutes a tree, and this is one that they include, worth 25 points. 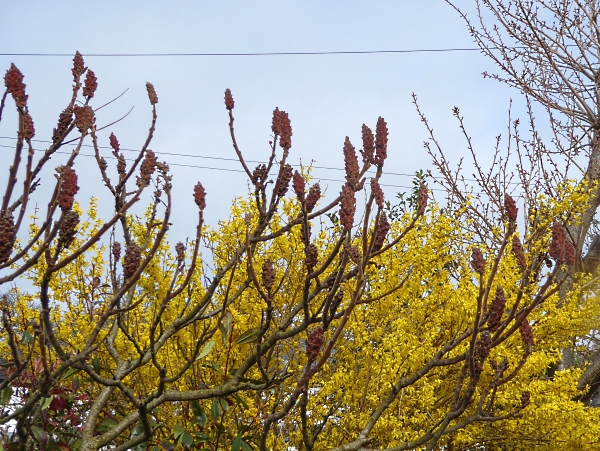 At the end of School Lane there is a footpath marked “3 miles to Thornton Hough”, and we went a few hundred yards along it. Perhaps we’ll explore it further another day. It was worth the short foray though, because we spotted a Chiffchaff, our first of the year. It wasn’t singing, and had perhaps just arrived from Africa . Then we returned to the Wirral Way and went back the way we came. A Robin was singing in the sunshine and the second Mistle Thrush of the day flew off as we passed. We heard the call of Great Spotted Woodpecker then spotted it in a tree. The early feathery leaves of Cow Parsley are shooting up all along the verges, and there was yet another Buff-tailed Bumble Bee. Less than a hundred yards from Station Road, Parkgate, there is big mound of red earth by the side of path, with several entrances on the far side. It is smooth by the entrance holes and there are some long scratch marks in the earth. There was no foxy smell. We think it’s probably a Badger sett, very near to houses and a busy road. 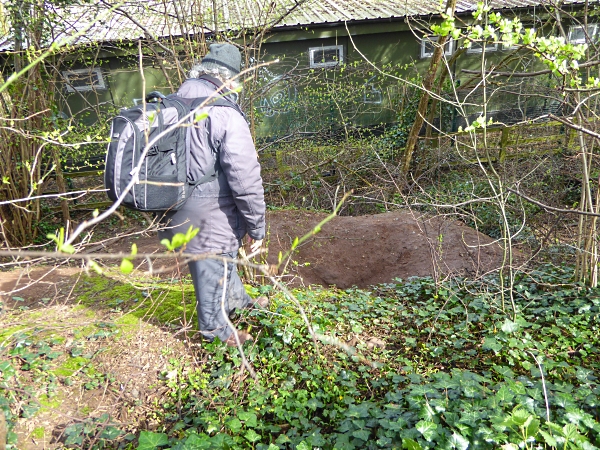 On a sunny tangled bank there was a carpet of Lesser Celandine, and in a shady corner what looked like Periwinkle but with oddly narrow petals. Was it an abnormal Lesser Periwinkle? The website English Wild Flowers, a seasonal guide, has a picture of a similar-looking Lesser Periwinkle Vinca minor, marked “Purple variety, Dorset”. 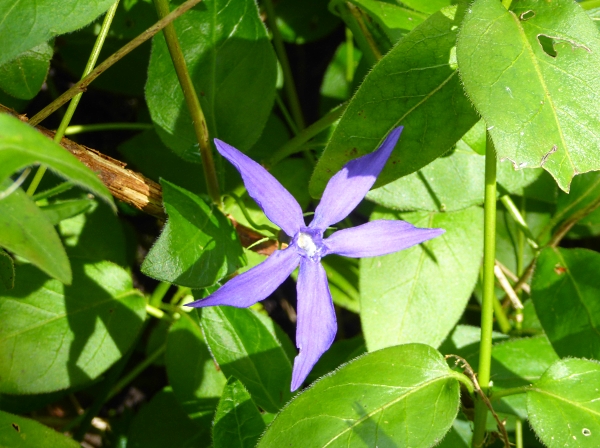 We came off the Wirral Way at Station Road, Neston. There was Shepherd’s Purse blooming at the edges of the pavement and some early Dandelions. High Street Gallery in the town had this painting of Parkgate Panorama, about 6 foot (2m) wide, marked “Limited Edition, only available here, £150”

The I-Spy bird points were up to 695 last week and we got at least 50 more today (including Teal, Chiffchaff and Mistle Thrush plus Rooks in the rookery in Thornton Hough as we passed on the bus.) The tree score is now up to 620.  (A1 Shillelagh, A2 May or Quickthorn).