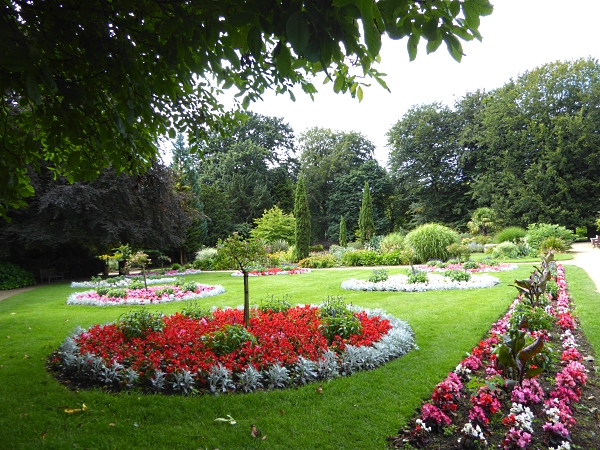 Calderstones Park holds one of the finest tree collections in the North West, and is perhaps the best park for trees in Britain. Today we hoped to see a rarity in flower, the Golden Rain tree, also known as the Pride of India, Koelreuteria paniculata. We walked up Ballantrae Road, across Allerton Road, and entered the park at the south east edge, where I spotted my first Yew berry of the year. There’s a Davidia tree (Dove tree or Handkerchief tree) at the south end of the Text Garden, and a Tulip tree in the middle. The Text Garden was designed with low hedges spelling out words. They are now hard to make out on the ground because some bits are missing, but try it on Google Earth! It spells out the names of flowers (Lords and Ladies, Love in a Mist, Lilly of the Valley and another unreadable one). We also spotted a Speckled Wood here, and a neglected nest box, lidless and squirrel-chewed.

Behind a fence in a shady corner just before the café at the corner of the Mansion House is a tree that has been identified to me as the infrequent Moosewood, Acer pensylvanicum, but I’m not quite sure. The leaves are more like the commoner Grey-budded Snake-bark Maple Acer rufinerve, and Mitchell says “A Snake-bark with grey and pink bark is always this species”. 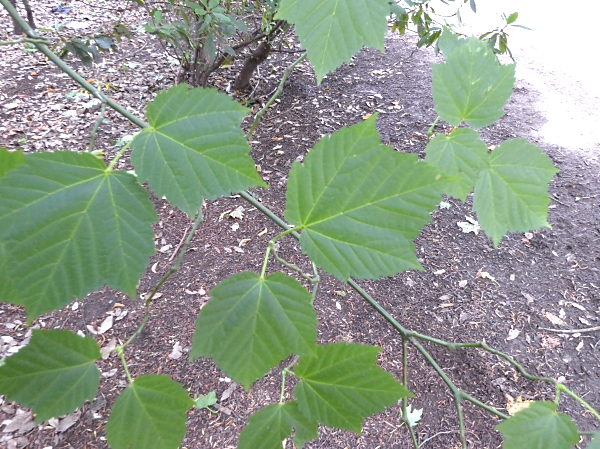 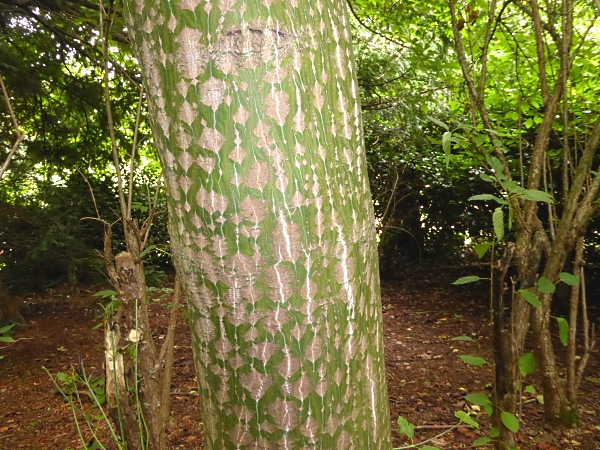 On the path approaching the ladies’ and disabled loos is a Black Walnut in fruit, and the Golden Rain tree is along there too, almost against the wall. It is supposed to be a small-to-medium tree, but this one is hemmed in by dark Yews and has bolted for the light. It needs binoculars to see the canopy properly, even while standing right under it. It is supposed to flower in mid-August, and we were right on time, but Golden Rains only flower intermittently, and this one hasn’t performed this year. It needs a chainsaw to be taken to the Yews to give it more light! 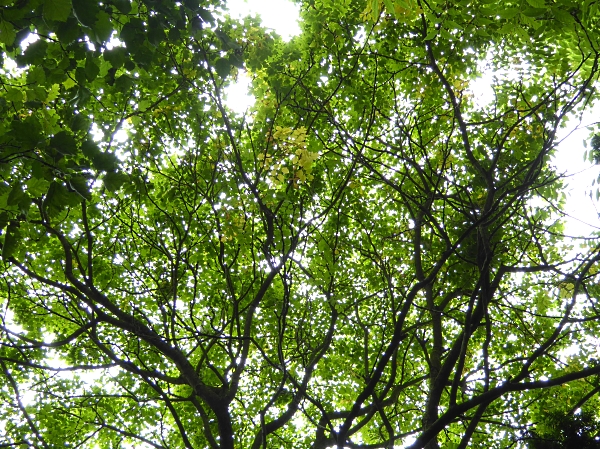 On the lawn outside the Coach House and Gallery is a small multi-trunked tree with large leaves that we thought was some sort of Lime until we saw the nuts with their floridly spiky cases, tucked coyly beneath the leaves. It’s clearly some sort of Hazel. It has to be a Turkish Hazel Corylus colerna. 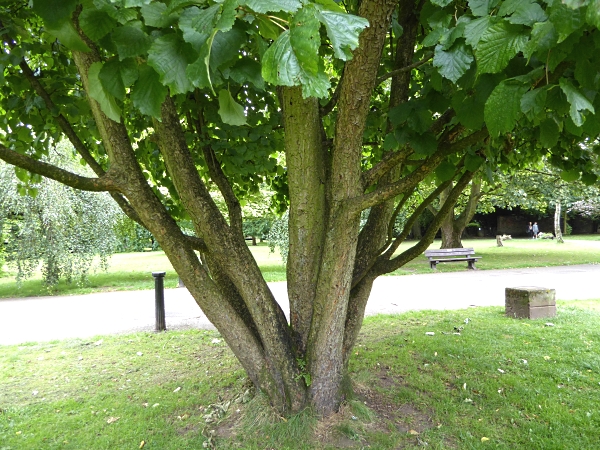 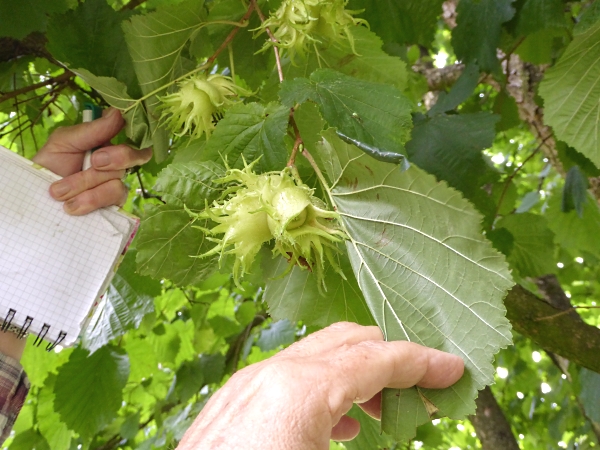 Beneath the Ivy on the wall by the Gent’s we found about three shoots of the parasitic Ivy Broomrape. There’s an old Gingko beside a path in the Old English garden, sprouting from its base. There are grape vines there too, with tiny bunches of grapes, no bigger than petit pois. We lunched around the fishpond, attended by a boisterous gang of Grey Squirrels and a rather scruffy-looking Robin, who clearly knew all about lunch. 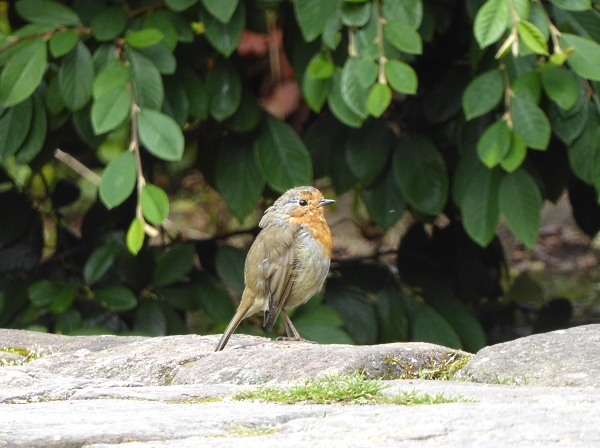 Near the café corner, behind the City Bike rack, is a Snowbell tree in early fruit. At one point there were four of us under it. 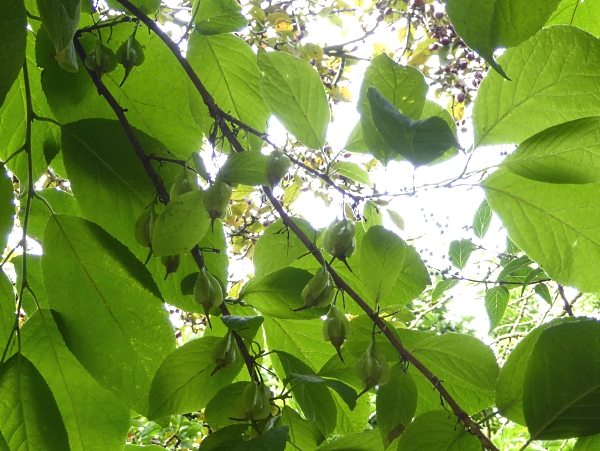 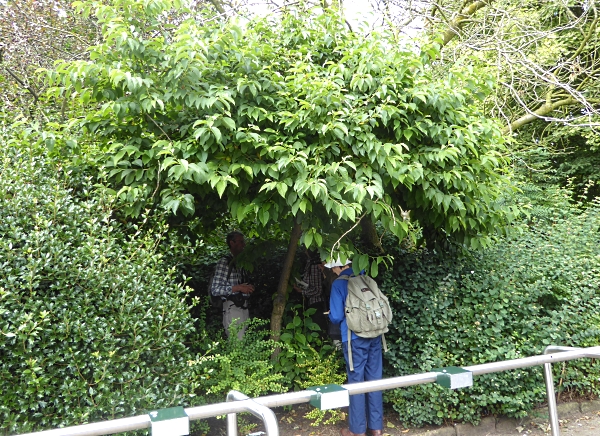 On the lake we noted only Canada Geese, Coot and Mallard. Some fishermen said it was stocked with Roach, Perch and big Carp, one making the classic fisherman’s gesture, indicating fish of about 18-24 inches. There is Water Figwort along the rails and a huge stand of  Purple Loosestrife. 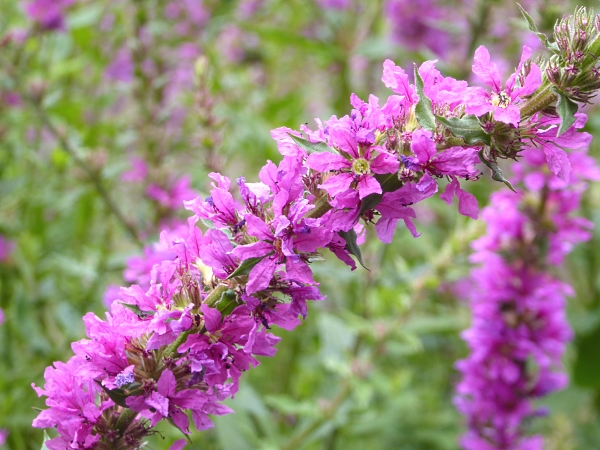 In the Bog Garden was a variegated Tulip tree, and what may have been a Lime-leafed Maple Acer distylum. I didn’t look at it properly, and I ought to come back for it sometime. (Added later: definitely not Lime-leafed Maple, because the seeds of that one stick up rather than hanging down. Perhaps Pere David’s Maple? ) 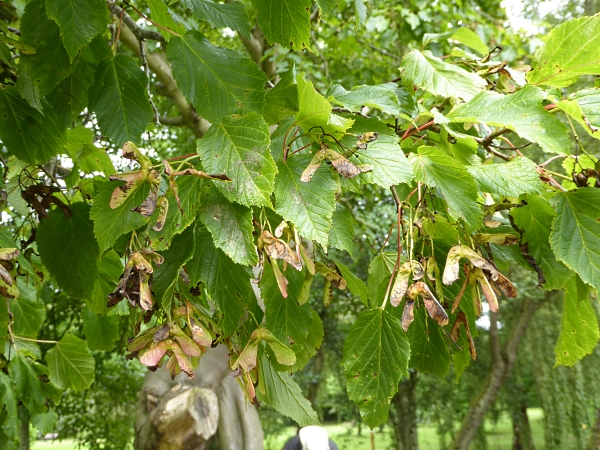 I was being distracted by a wonderful Caucasian Wingnut Pterocarya fraxinifolia with its masses of hanging seeds. 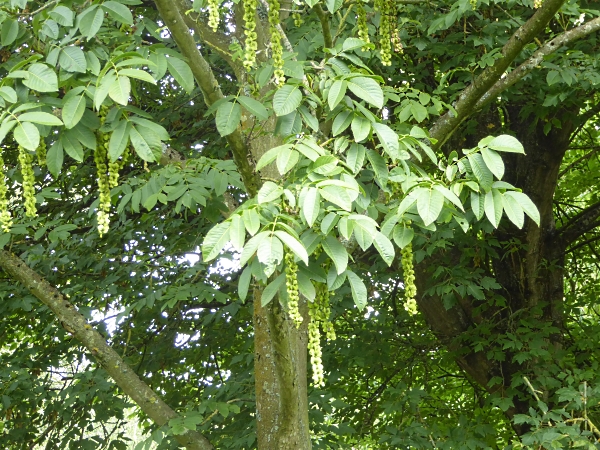 It seems to be a very good year for tree seeds. There were heaps of immature Alder cones and both kinds of Walnut were in fruit. I didn’t notice much in the way of acorns, although it might be too early yet. The Beeches are covered with brown seed cases which aren’t open, but they feel a bit flat. 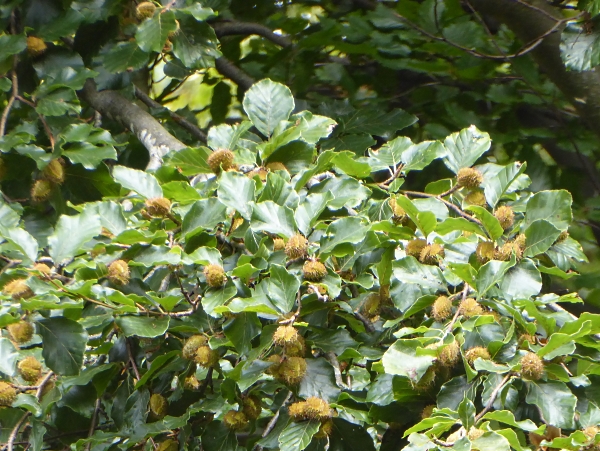 Corpse of the Day was a dead Wood Pigeon, probably a Sparrowhawk kill, but there weren’t many feathers about. In the rockery we noted a Paper-bark Maple, and a bit further we admired what was probably a Silver Pendent Lime Tilia petiolaris. Then we were stopped in our tracks by a tall Swamp Cypress Taxodium dischitum. 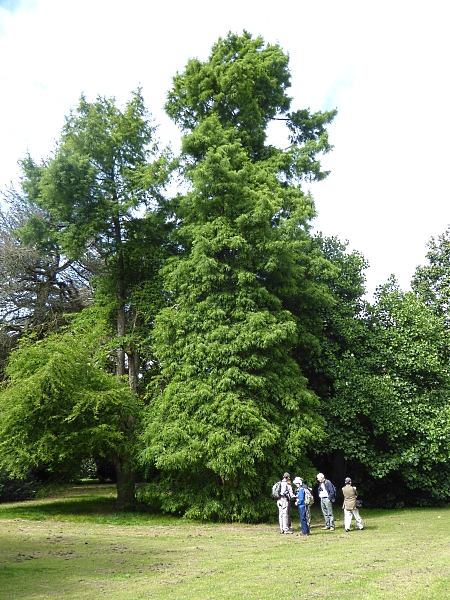 Right next to it was a mature Tulip Tree with just a few late flowers. We thought we’d missed them this year, so this was a bonus. 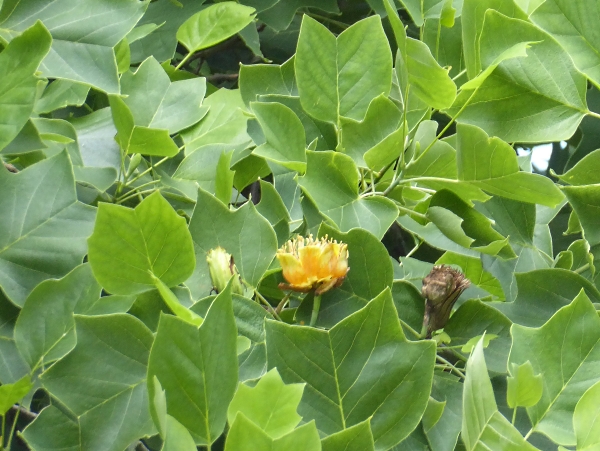 Then we headed back past the Allerton Oak and home the way we came, via Ballantrae Road.