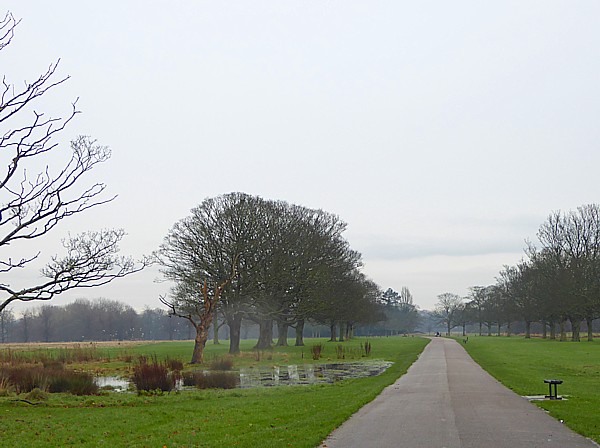 It was a cold, wet morning, with a steady drizzle all day. On the long walk up to the Hall we noticed an old Hawthorn tree that had come down in storm Desmond, and also that the temporary pond in the wet grass on the left was now nearly encroaching on the path. The herd of Highland Cattle appears to be doing well, now a dozen or more strong, with some young ones. They were ankle deep in mud but didn’t seem to care. 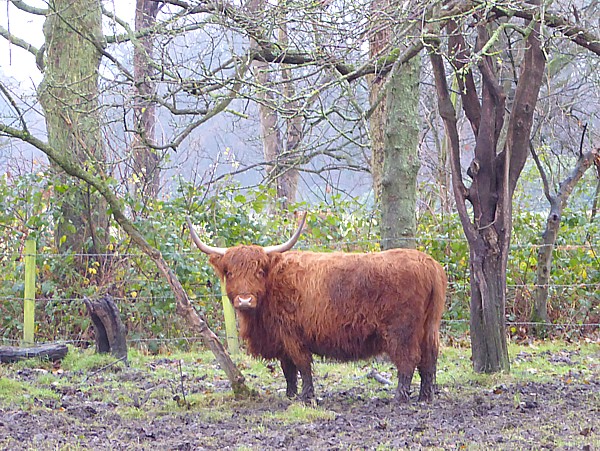 On the lawn opposite the house is an interesting evergreen tree, a Lucombe Oak. It has green glossy leaves and corky bark. See some pictures of it on my post of 11 Dec 2011, where I said it was a hybrid of Holm Oak and Turkey Oak, but that’s wrong – it’s a cross between Turkey Oak and Cork Oak. 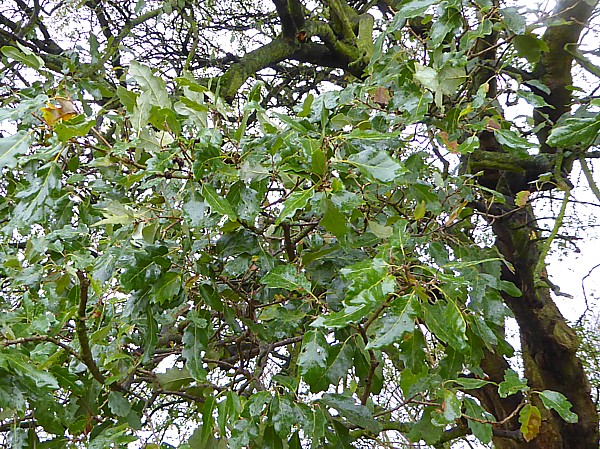 The Winter-flowering Cherry was in bloom, probably Prunus subhirtella ‘Autumnalis’. 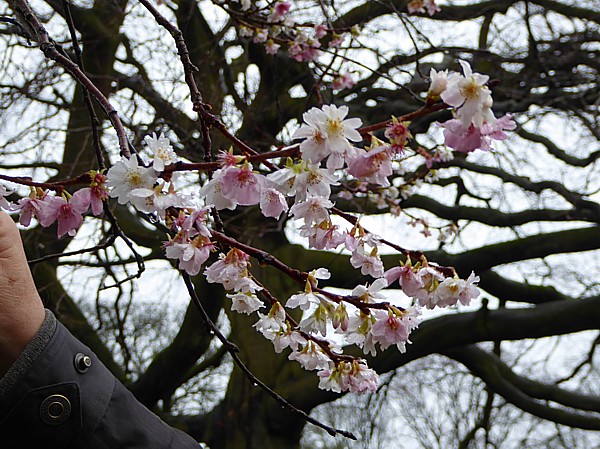 Not a good day for birds it was far too wet. We heard a Great Tit calling tea-cher, tea-cher, and some Crows cawing. Magpies were about in abundance, and some Black-headed Gulls were far out on the fields. A few forlorn Mallards pootled about on the Long Pond, leaving clear trails in the green weed, and some Moorhens ventured out to peck at the wet grass. A clattering of over 50 Jackdaws congregated in a tree above the old stable block. 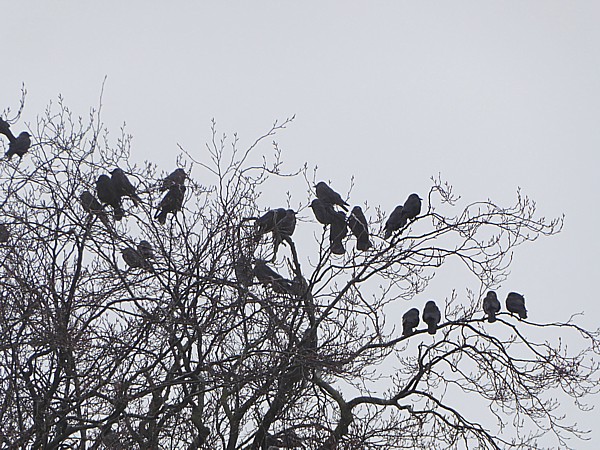 One of the old Beeches on the main lawn was showing off its exposed roots. They are very shallow-rooted trees, and sometimes come down in storms. This one had, luckily, shed all its leaves by the time storm Desmond came along. 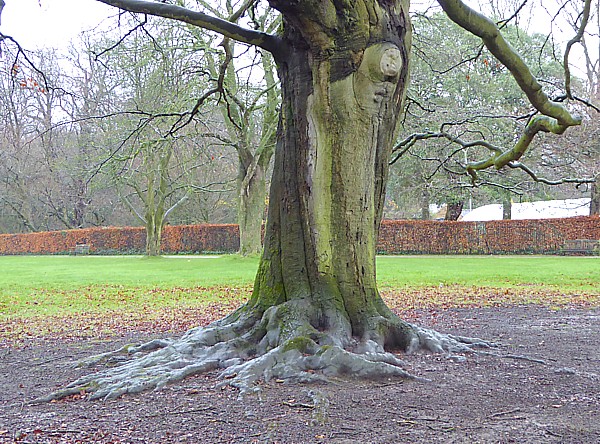 North of the Hall, there’s a tree with bark mulch all around it, and a ring of logs. Two strange devices were hanging in the branches, looking like wind chimes, but they weren’t. The tree had a straight bole and tiny acorns, and judging by the fallen leaves nearby, it could have been a Pin Oak or a Scarlet Oak. Is it undergoing some special study by the students at the outstation of Myerscough College nearby? 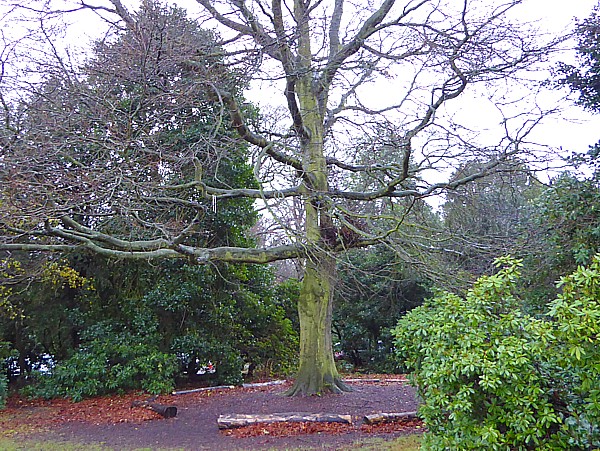 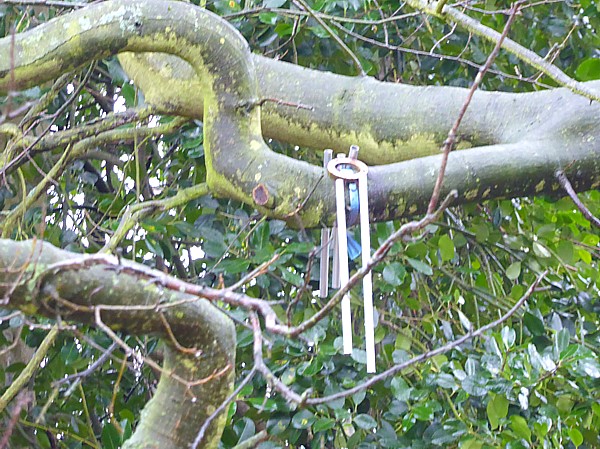 As we turned back to West Derby Village, we spotted our Tree of the Day. Next to the path at the end of the fountain lake was an otherwise undistinguished tree with delicate drooping bare branches, which we might have easily taken for a Birch, except that it had a lot of spiky seed balls hanging from the branches. They were far too spiky to be Plane fruits. I looked it up at home and it must be a Sweet Gum Liquidambar styraciflua. According to Mitchell’s tree book, the flowers and fruit are “not often seen” in the UK, so our warm summer must have suited them.  In the Southern USA they call it the most dangerous tree in the suburbs, and American gardeners often collect the spiky balls to ward off snails and slugs from their flower beds. 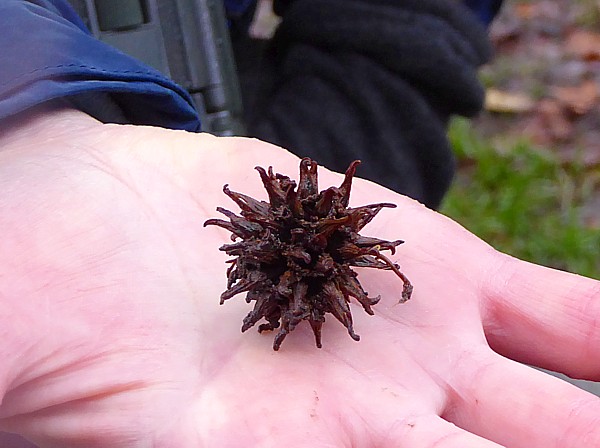 Happy Christmas and New Year to everyone.