The forecast promised rain, and it wasn’t wrong. It started while we were on the bus, and poured all day. 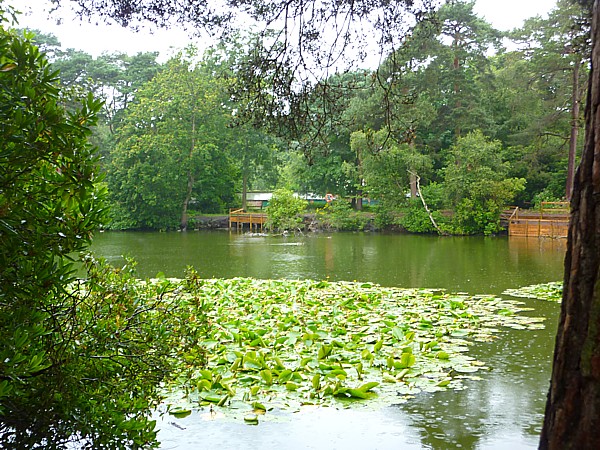 From the bus stop just past Frankby we took the footpath southwards to Birch Heys and Montgomery Hill. Horses were sheltering from rain under a tree, but we carried on, noting Ragwort, Red Clover, a pinkish Yarrow, and some early signs of autumn. The Bramble’s first berries were starting to ripen to dark red and the Herb Robert leaves were also turning. 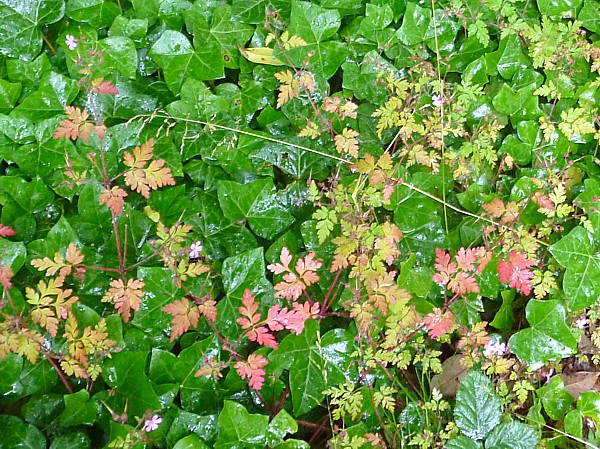 Another footpath took us southwards to Royden Park. I saw no birds in the heavy rain, but John said he’d spotted a Jay, a Wood Pigeon, a Blue Tit and a Blackbird. We were very happy to arrive at the shelter of the Visitor’s Centre and the café. 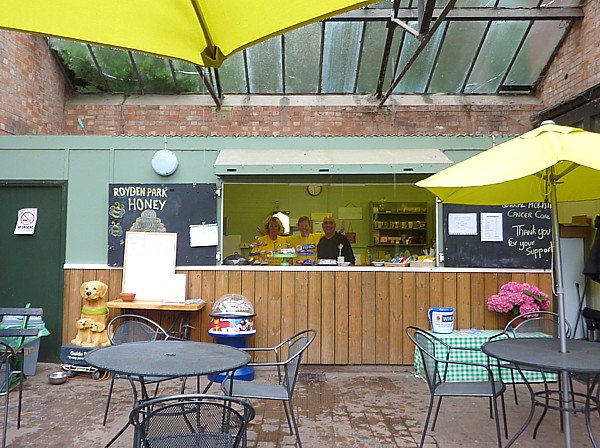 A sign in the Centre explained Royden Park’s woodland history, mentioning that they have some rare specimen trees here – Madrona, Cedar of Lebanon, Deodar and Grand Fir – but it was too wet to look for them. Perhaps another day. 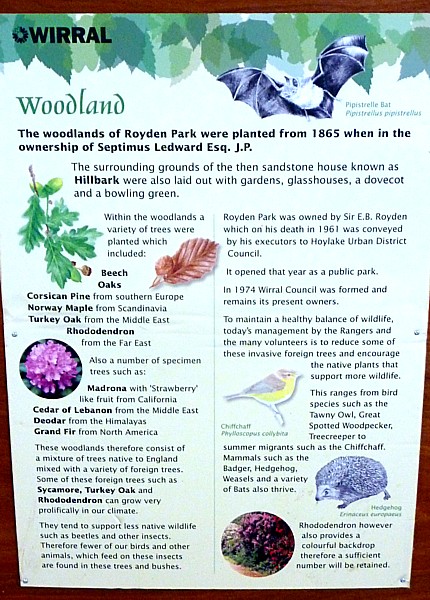 We mooched about in the Walled Garden. They have a Laburnum arch, but it was well gone over. There were bird tables and feeders but no food had been put out so there were no birds. There was a beehive in the glade and an old cast iron blacksmith’s forge made by the Birmingham engineers Alldays and Onions in about 1890. 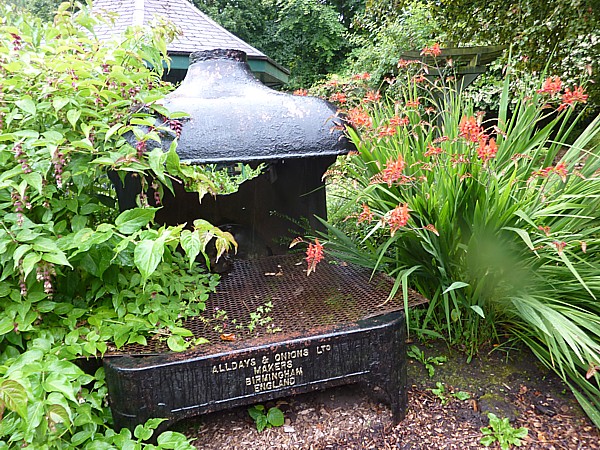 We lunched in the shelter of the gazebo, which, according to a plaque, was originally from the Garden Festival Victorian Garden in 1984, and was donated to Wirral Council by Unilever. A Dunnock emerged briefly, but then retreated to the shrubbery. There was a gorgeous ornamental Maple with its leaves just starting to take on autumn colours. There was a row of fresh Molehills across the same lawn. 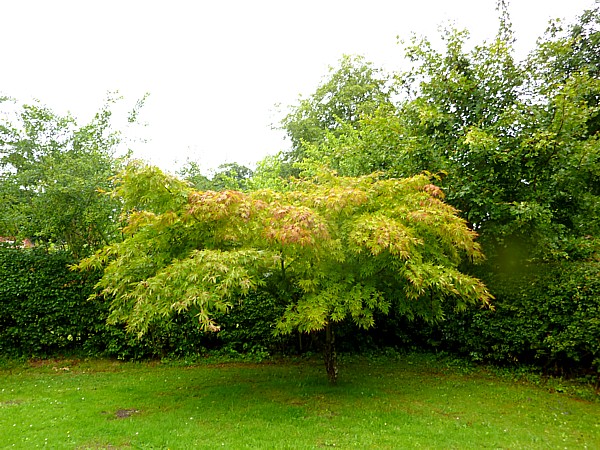 Roodee Mere is a fishing lake, with only Mallards as far as we could see. The verges had Rosebay Willowherb and Himalayan Balsam, while great piles of Water lilies were stacked up in the water, both the white and the yellow species, but not the smaller Fringed Water Lily. Then we spotted a Moorhen hopping on one leg, with the other leg drawn up. A ranger told us they had found it a few days before, entangled in fishing wire, and freed it. It was a female, with two chicks to look after. She swims well, they said and feeds OK. She’s very ungainly on land, though, and before she can muster the oomph to hop, she needs to put her beak down almost to the ground and get on the tips of her toes. But she chose to move into cover when disturbed, not to go for the water, so she appears to be managing. 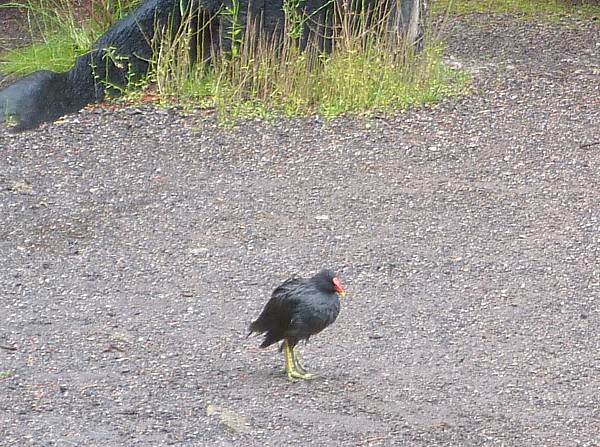 We returned to Frankby via Hillbark Road, noting Honeysuckle and Greater Willowherb in the verges. There was a huge infestation of Horse Chestnut leaf miner Cameraria ohridella on one unfortunate tree, which we first noted in Reynolds Park in August 2014. 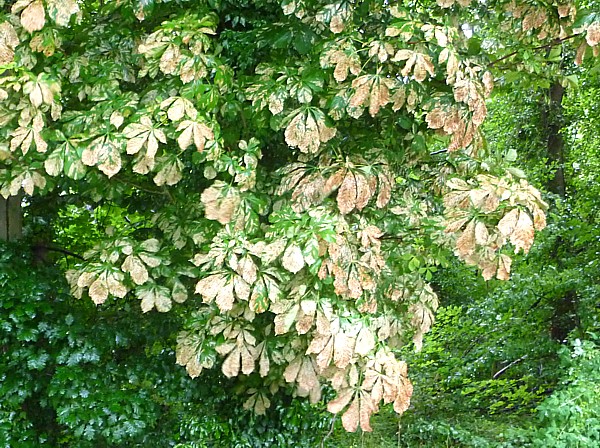 Another sign of approaching autumn was on a rather muddy-looking Copper Beech, which had started withdrawing the green pigment from the leaves at the tips of its branches, leaving them bright pink. 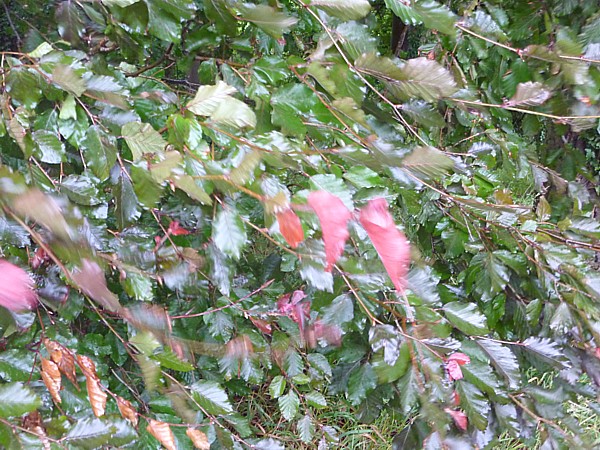 It was still raining, so instead of getting the bus back to Liverpool we chose the bus stop with the  shelter, and the bus going in the opposite direction, into West Kirby for the train.  By the time we got back to Liverpool the rain had stopped!