This was a dual-destination MNA coach trip, and six of us softies were dropped off at Bodnant, then the coach carried on with the hardier souls to Aber Falls. As naturalists, we were not particularly interested in Bodnant’s exotic garden plants, so we mostly concentrated on the trees, although the planting is marvellous and the setting is wonderful. 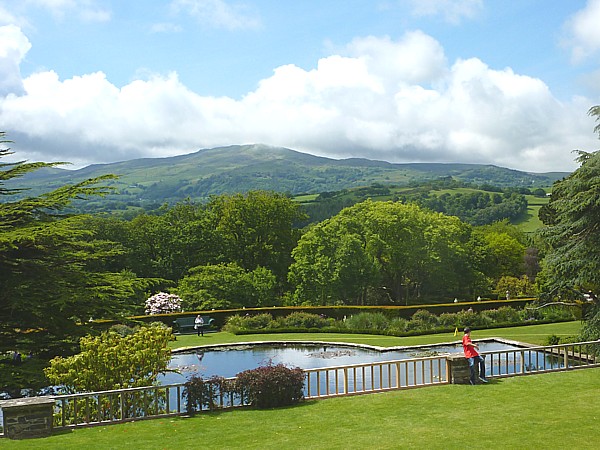 In contrast to bird reserves, where you get a chalkboard of the best birds seen in the last few days, they have “Head Gardener’s Notes”. The Davidia tree (Dove Tree or Handkerchief Tree) was said to be out, but regrettably, we didn’t spot it. 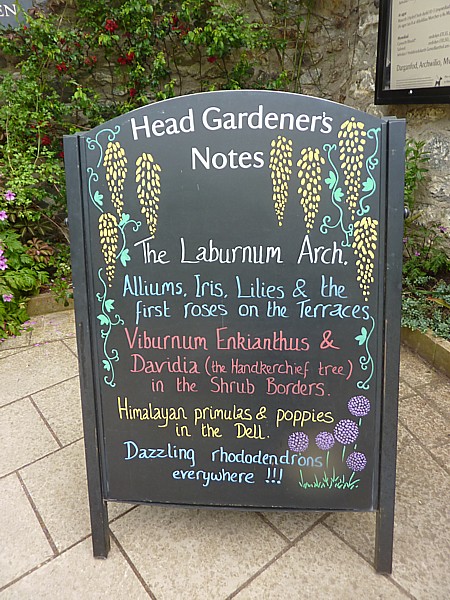 The Laburnum arch was, however, flowering in glory. 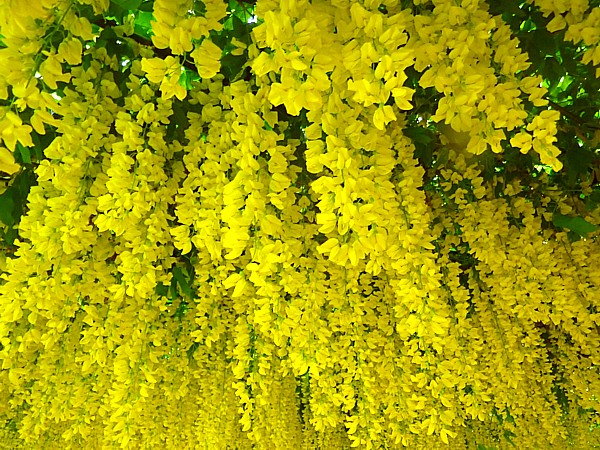 On the top lawn there’s a huge Monterey Pine Pinus radiata, a Tulip Tree Liriodendron tulipfera and a massive straight-boled Common Beech Fagus sylvatica. On the far side we spotted a Blackbird and there was a pair of Buzzards against the clouds. Then we examined a Paper-bark Maple Acer griseum and a bent and twisted Sweet Chestnut Castanea sativa, said to be over 200 years old and carrying a sign begging children not to climb or swing on the low branches. The bark was a marvellous twisted network of ridges. 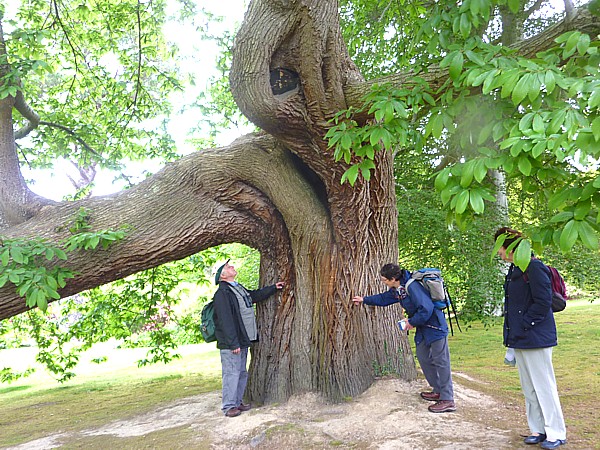 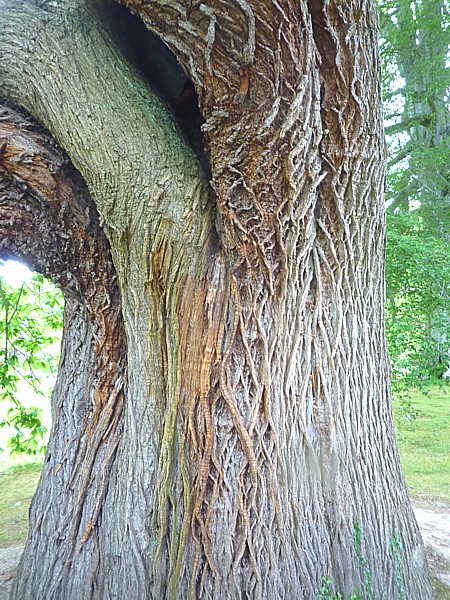 On the Lily Terrace are specimen trees of Blue Atlas Cedar Cedrus atlantica “Glauca” and Cedar of Lebanon Cedrus libani, sadly damaged in a storm some years ago. 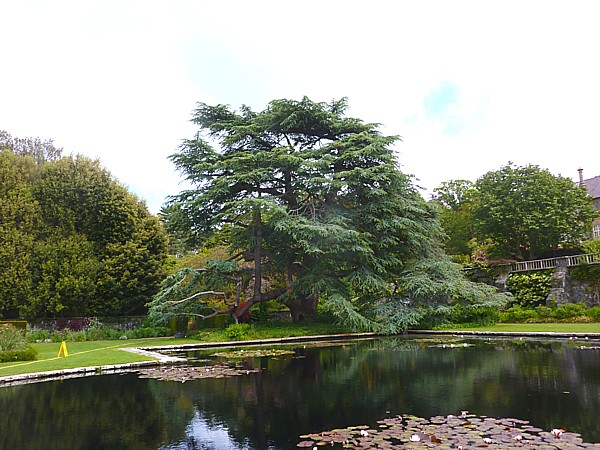 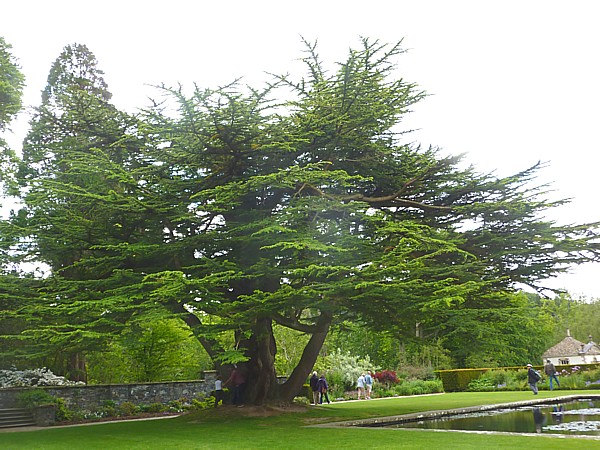 The long pond by the Pin Mill had delicately placed, perfect water lilies at each end, and also Water Boatmen and Whirligig Beetles. There was a Song Thrush in the shrubbery and a roped-off edge had a sign saying it contained wildflower seedlings. “See our exciting new planting scheme next year”.  Don’t tell me they are going to plant out some wild flowers!

Our next interesting tree was a Magnolia accuminata, the Cucumber Tree. The flowers aren’t very spectacular, but in early autumn it bears erect, shocking-pink “cucumbers”. 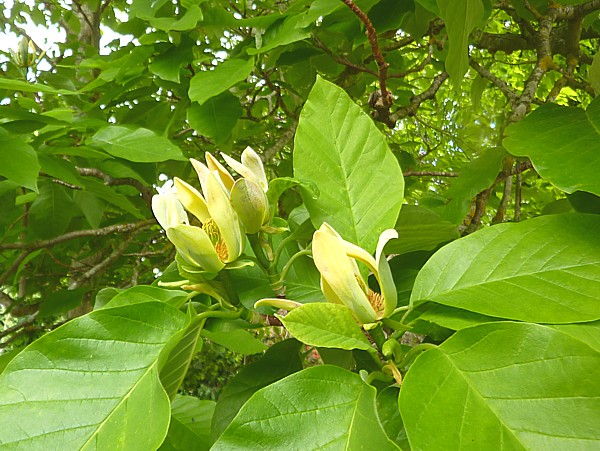 Another part of the shrubbery had three or four big fungal fruiting bodies, not long emerged and not yet fully spread out. Although we didn’t notice a ring on the stem (stipe), which there ought to have been, the stipe did have the scaly “snakeskin” pattern which makes me think this was the Parasol, Macrolepiota procera. It was a bit early for it (it’s not supposed to be out until July) but everything else matches. 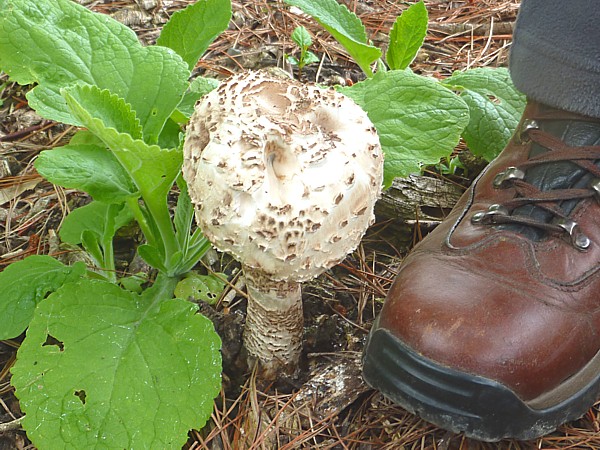 We lunched in the Dell, where there was a Red Admiral, a Mute Swan on the water and John saw a Raven flying over. Someone had found the empty skin of a Dragonfly nymph at the edge of the river. A volunteer guide, who wasn’t a naturalist of course, was exclaiming on its size and suggesting it was an Emperor. Out came the FSC guide, and we concluded it was something broad-bodied, possibly a Broad-bodied Chaser. Notice the white threads on its back, which are on several other photos of shed skins which I looked up. They must be part of the emergence process. 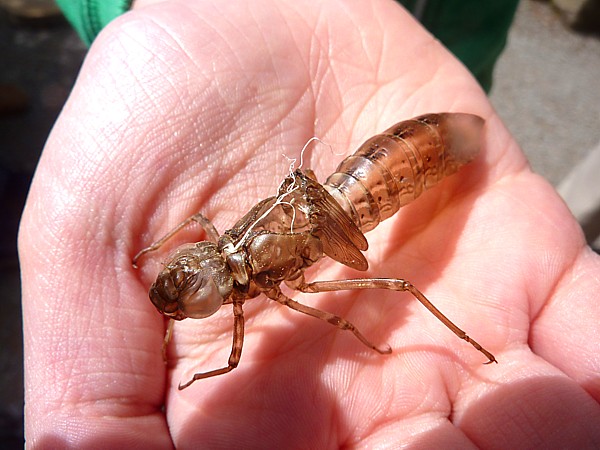 Amongst the Hostas was a very weird flower spike, labelled Arisaema victoriae. It’s a rare Chinese Arum which is IUCN Red-listed. What an alien monster it is! 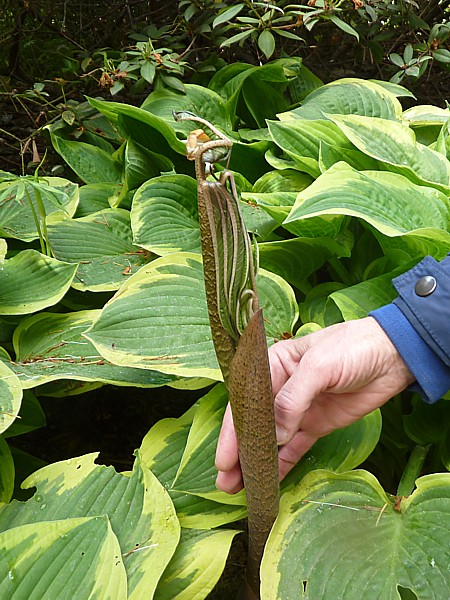 Along the bottom of the Dell is the Redwood collection. One is a California Redwood Sequoia sempervirens, planted in 1886 and which is now 129 years old. It is the tallest in Britain, last measured at 49 meters, 160 feet 9 inches. 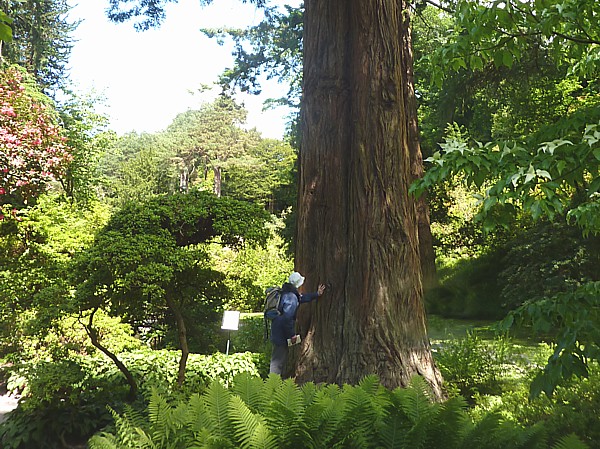 They also have Giant Redwood Sequoiadendron gigantea, Wellingtonia Sequoiadendron gigantea “Pendulum” and Dawn Redwood Metasequoia glyptostroboides, one of which is the golden variant “Goldrush”, which we have also seen in Chester Cathedral cloister garden. One Giant Redwood had a sign asking people not to touch the bark “to prevent further damage” and there was a bee nest high up in a hole in the soft bark. It might be on its way out.

At the Waterfall Bridge there were Red-tailed Damselflies in their mating dance. John and Frances saw a mammal swimming under the water to the far bank and then it disappeared. It was about eighteen inches long including the tail, dark brown, almost black, with white feet. Was it a Polecat? Or a feral ferret? They thought it probably wasn’t an Otter (too small) or a Stoat (wrong colour).

As we climbed up the opposite bank of the Dell on the way to the “Poem” (the Mausoleum) we spotted a Treecreeper and one of the only really wild flowers of the day, Wall Pennywort Umbilicus rupestris. 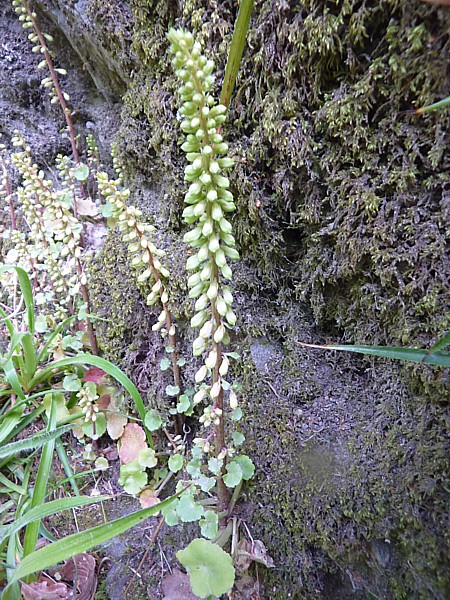 In the Shrub Borders there was a spotty young Blackbird which dived out of sight into the undergrowth, a Chiffchaff calling, a Speckled Wood and two Blue butterflies over the grassland and a cheeky Robin. The Robin at the Dell had been pretty tame too, so it looks like they are indulged here. 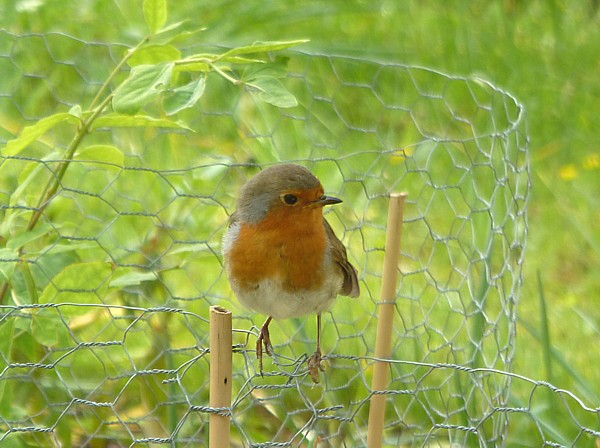 From high on the north side of the Dell we looked back over the giant trees in the sunshine on the south side. For scale, notice the very small people at the path junction at the bottom right. 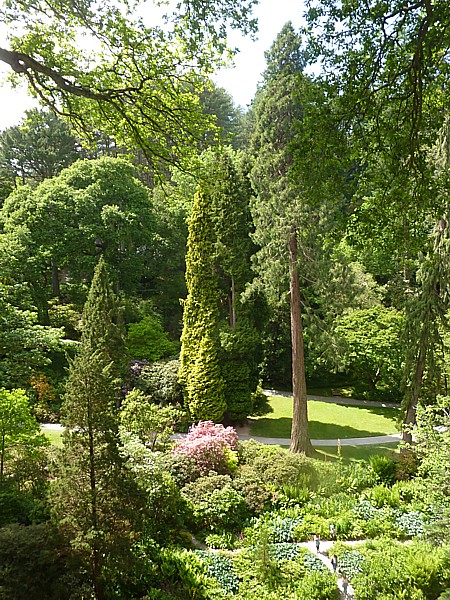 We looked at a pretty young Judas Tree Cersis siliquastrum “Bodnant”, planted in honour of Lord Aberconway of the resident family, who died in 2003. 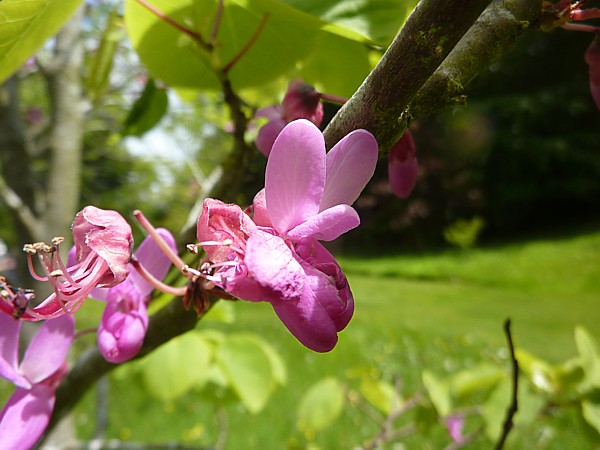 What about this! A Chilean Fire Bush Embothrium coccineum. 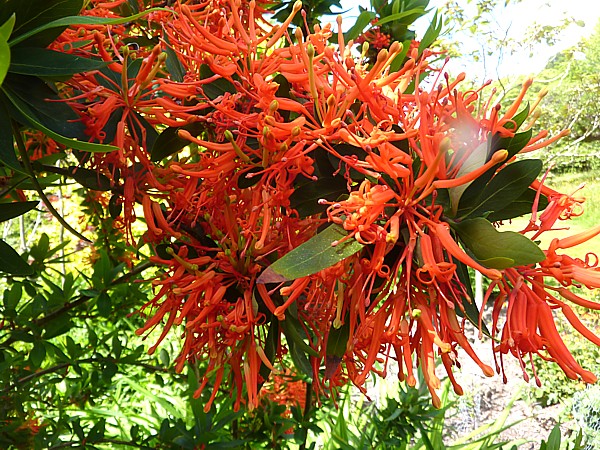 One tree was labelled Tetradium danielliae, which is a very rare tree from China and Korea, with no English common name. Its leaves were like Ash leaves, and it has white flowers. The one at Bodnant wasn’t flowering, sadly, and it looked a bit hidden and overshadowed. There were two species of Sweet Gum, the more common Liquidambar styraciflua, and the rarer Oriental Sweet Gum Liquidambar orientalis. Both had leaves which gave off an aromatic smell when crushed. 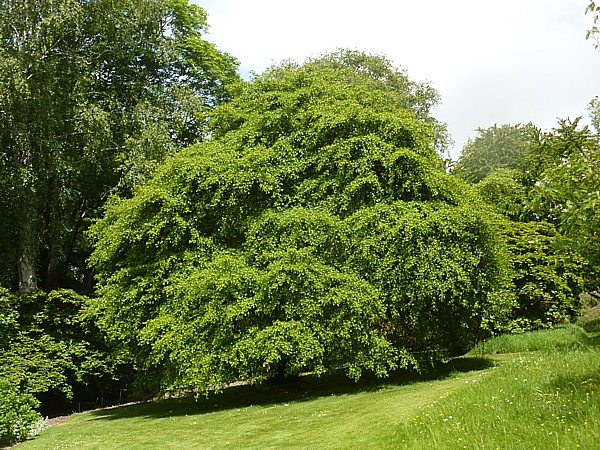 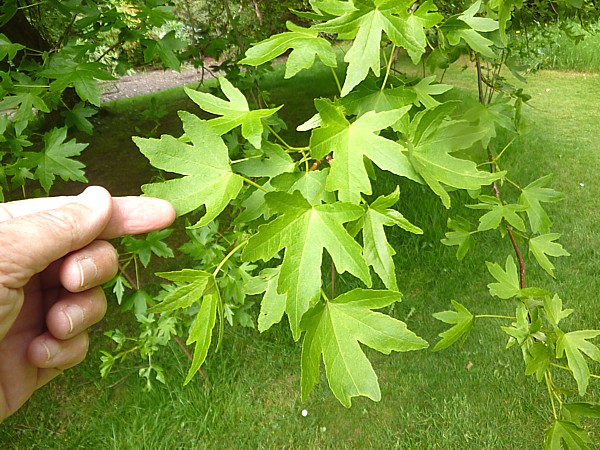 Nearby was a Smooth Japanese Maple Acer palmatum “Atropurpureum”, whose leaves look very similar to the Sweet Gums, but have no smell. The young seeds are obviously Acer/Sycamore type, too. 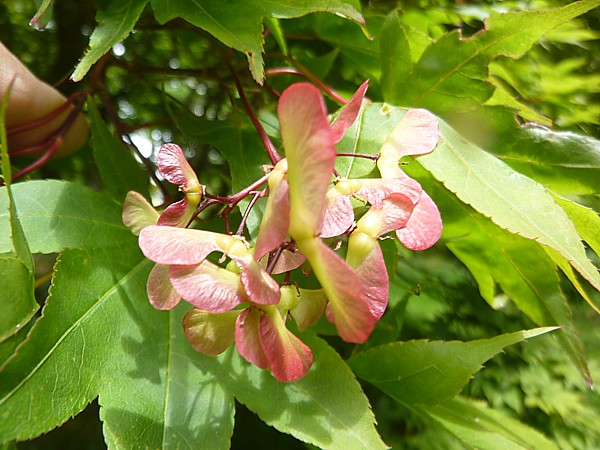 We couldn’t avoid all the “garden” plants, and we admired this Kousa Dogwood Cornus kousa, which is native to Japan and Korea. 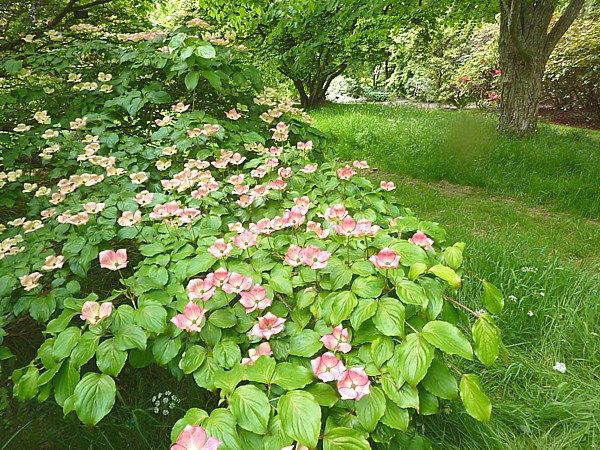 Our last bird was a briefly-spotted Bullfinch, and then we gave ourselves up to tea, cakes and shopping!