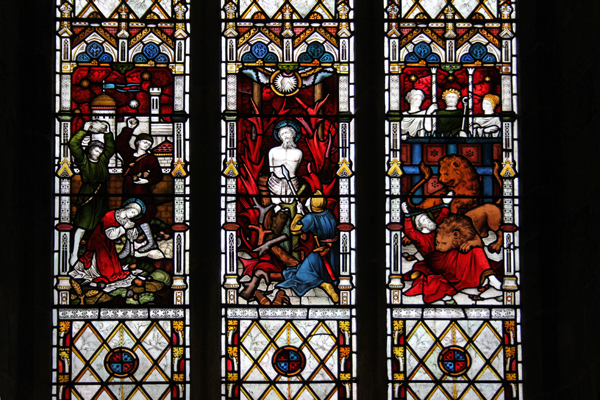 The last MNA coach trip to the Duke of Devonshire’s Estate at Bolton Abbey had been way back in May 2006 so members were eager to return. I had a quick look around the 12th Century Priory Ruins and adjoining Church with its 13th Century nave and fabulous stained glass windows before catching up with the group who were standing on the Stepping Stones Bridge crossing the River Wharfe watching a Kingfisher and a Dipper. House Martins and Swallows were busy zipping overhead and swooping low over the floodplain meadows fuelling-up for their imminent migration.

Under the expert guidance of Pat Lockwood a small group of members wandered along examining the rich flora of the Estate. A variety of Ferns were found – subtle differences in frond shape, size and texture allowing identification. There was Male-fern Dryopteris filix-mas – a few plants of which seemed to be infected with Knotting Gall caused by the Dipteron Fly Chirosia betuleti – the tip of the fronds rolls upwards into a loose, obvious knot or mop-head structure involving many pinnae. 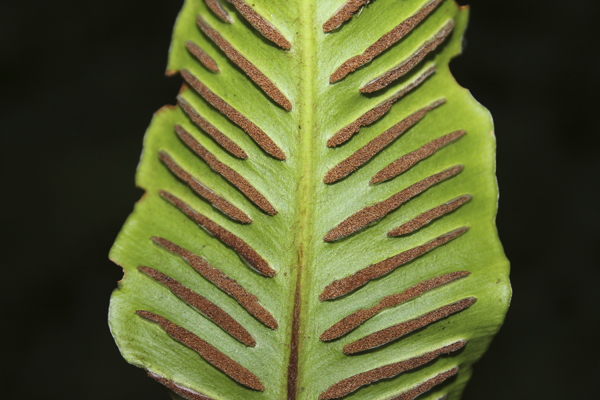 Hart’s-tongue Phyllitis scolopendrium – with its linear sori in pairs on the underside side of the frond; the delicate feathery Brittle Bladder-fern Cystopteris fragilis; Hard-fern Blechnum spicant a.k.a. Deer Fern – with long individual fronds reaching 40cm; Broad Buckler-fern Dryopteris dilatata – with broad, triangular and tri-pinnate fronds and also triangular scales along the stem that have a dark centre which is a diagnostic character for this species, Soft Shield-fern Polystichum setiferum – with soft-textured, bipinnate fronds. 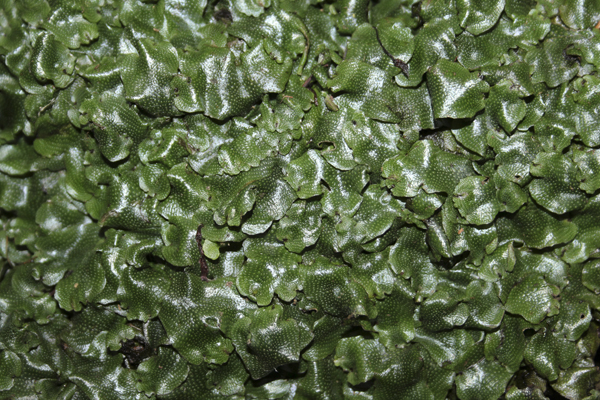 On Shady rocks beside a small stream we noted the extensive mats of flat dark green leathery thalli of the Liverwort Conocephalum conicum. It is strongly aromatic and has conspicuous air pores on the thalli surface that give rise to its common names of Great Scented or Snakeskin Liverwort. I also noted a scattering of Opposite-leaved Golden Saxifrage Chrysosplenium oppositifolium leaves.

Given the time of year the woodland was quiet with little birdsong but a few good bird were noted with Spotted Flycatcher, Nuthatch, Treecreeper, Great Spotted Woodpecker as well as Chaffinch, Blue Tit, Long-tailed Tit, Dunnock, Robin, Wren. 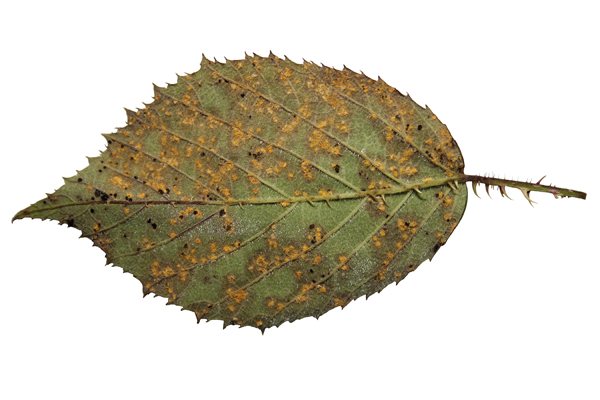 Violet Bramble Rust Phragmidium violaceum was affecting the Brambles Rubus fructiosus – the upperside of the leaves having an attractive green and red mottled appearance, on the underside we saw two stages of the same fungus growing together, orange urediospores together with black teliospores. We noted the star-shaped sepals and drooping fruits of Giant Bellflower Campanula latifolia that dry and split open to disperse the seeds, later we were to find the fruits of Nettle-leaved Bellflower Campanula trachelium. 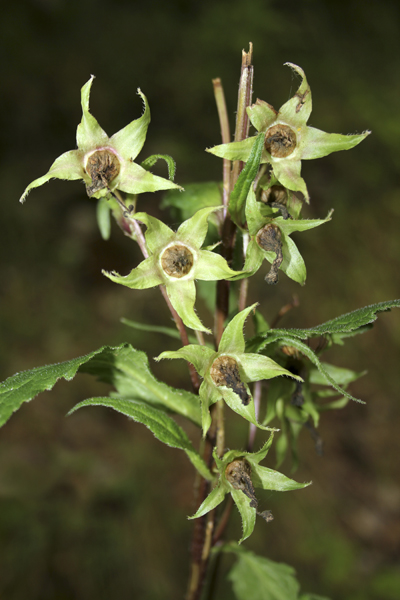 We stopped for lunch, on the dead branches of a deciduous tree there were the distinctive orange pustules of Coral Spot Nectria cinnabarina. Close-by yet more Opposite-leaved Golden Saxifrage and one of our common woodland mosses Swan’s-neck Thyme-moss Mnium hornum and Snowberry Symphoricarpos albus. 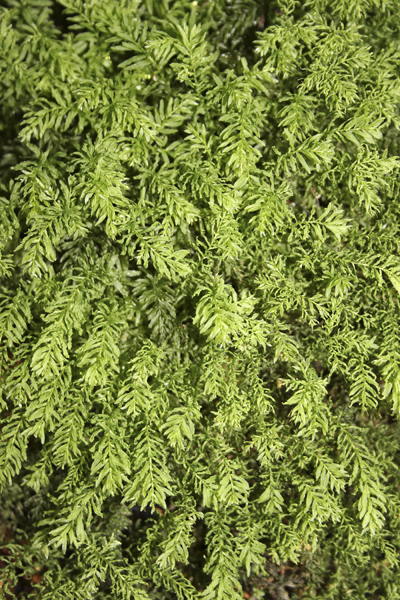 Out on the River Wharfe we saw four Goosander and later close to Cavendish Bridge we watched a Grey Wagtail and another couple of Dippers fearlessly diving head first into the River Wharfe to hunt aquatic invertebrates before emerging onto a rock and bobbing up and down. Further along we saw yet another Dipper – testament to the environmental quality of the River supporting Dipper territories in such close proximity.

There was a problematic plant that had us flummoxed. A few plants still had small 2cm globose flowerheads with whitish flowers and long, narrowly triangular bracts. The spiky seedhead reminded me of those of the Scabious family – Pat later confirmed its identity as Small Teasel Dipsacus pilosus. 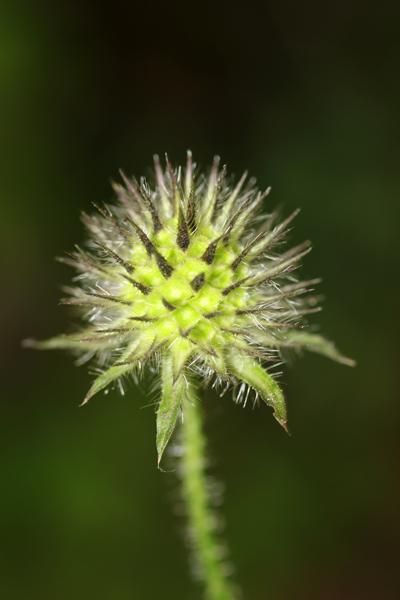 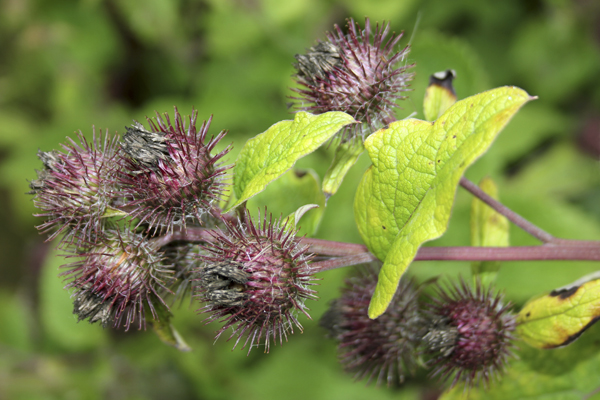 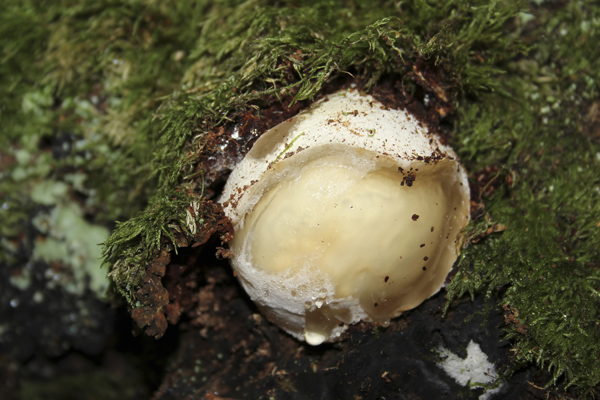 We noted a Slime Mould known as the False Puffball Enteridium lycoperdon (a.k.a Reticularia lycoperdon). This slime mould has a number of phases to its life cycle and our specimen was conveniently ‘in-between’ phases. During the plasmodial stage it appears as a white globular mass about the size of a golf ball, during the reproductive sporangial stage it becomes glutinous. Finally a smooth white and silvery surface develops, which eventually splits to expose a brown spore mass beneath. 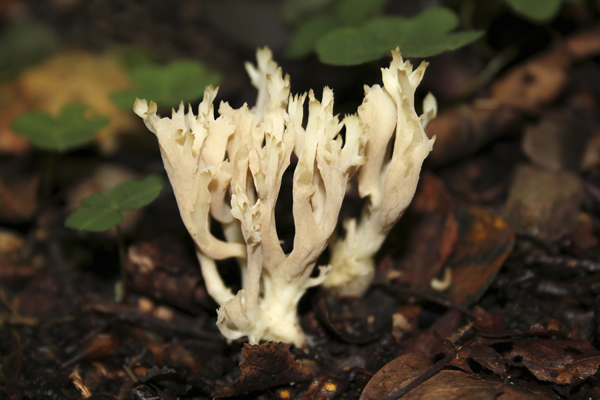 Our ‘Corpse Of The Day’ was the Butterfly wing remains of a Wall Lasiommata megera, earlier a Red Admiral Vanessa atalanta had been our only live Butterfly of the day. Our group eventually returned a bit later than our planned departure time to the coach – sorry folks!