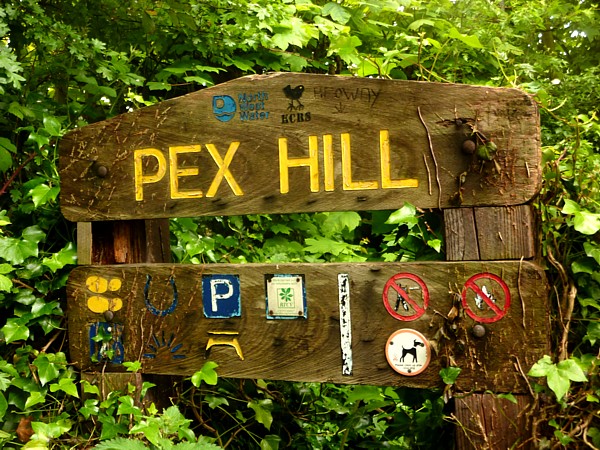 Pex Hill, at a measly 200 ft (61m) stands so high above the Lancashire plain that Liverpool Astronomical Society has an Observatory there! It was a mostly wet day but even in those conditions, the views towards Liverpool were impressive. We could see both Cathedrals above a band of trees. 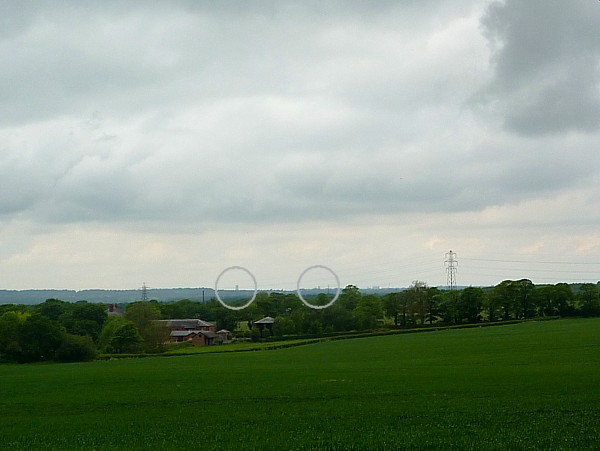 On our way up the hill there was a Grey Squirrel on a driveway, foraging under a bird feeder, and we heard Robin, Chiffchaff and Chaffinch. Outside the Observatory there are picnic tables, but it was too early for lunch so we strolled around the top in the weak sunshine. About a dozen 7-spot Ladybirds were out on Stinging Nettle leaves, catching the few rays there were, but they didn’t seem to want to bask on the White Dead-nettle right next to them. In the woods we spotted a Mistle Thrush, Jelly-ear on a branch, Wood Avens in the shade, masses of Cow Parsley and Red Campion in the sunny glades and a Rabbit scampering off. Then the rain started and we sheltered under some oaks, finding more currant galls, now we know what to look for. A Jay and a Great Spotted Woodpecker put in fleeting appearances, and two Wood Pigeons hunched miserably on telegraph wires in the rain. Above the quarry there was a pretty little pond with Yellow Flag Iris. 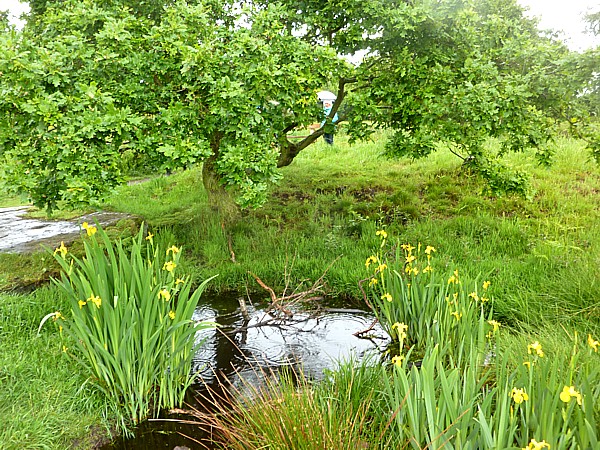 We were back at the Observatory for lunch, just as the rain eased off. Two big stones outside are carved with fake fossils – a Trilobite and an Ammonite, I think. 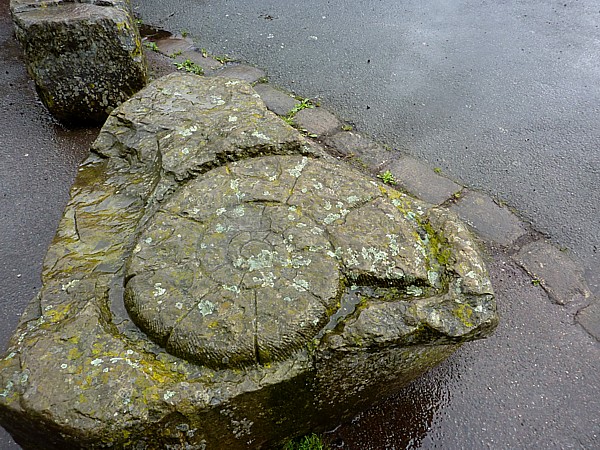 Swifts flew over, and a slow flapping Heron. The Broom was blooming brightly. 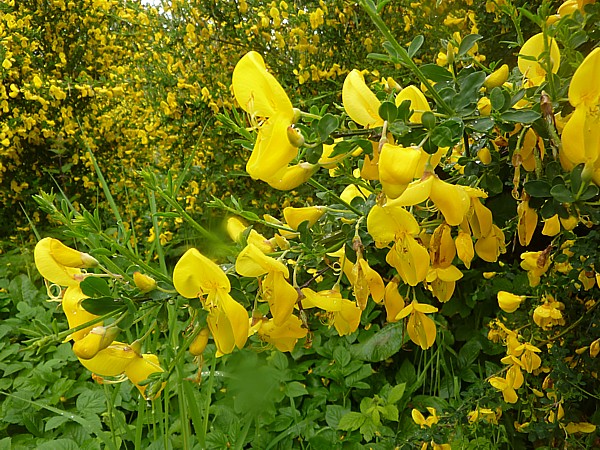 We walked down the hill and came out by Holy Family RC church. In the gardens we admired the juxtaposition of blue Cyanotis and yellow Mexican Orange, and a pink Hawthorn was in full bloom. 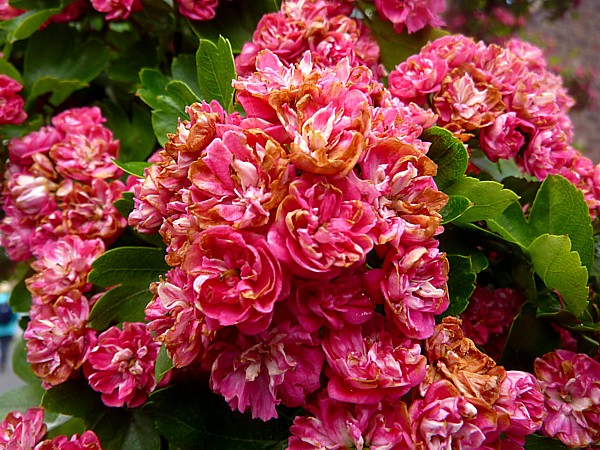 Sandy Lane appears to be closed to traffic as part of the Cronton Pathways project. Twined along its Hawthorn hedge were the pale green leaves of Hop, perhaps a single vine running for about 50 yards. 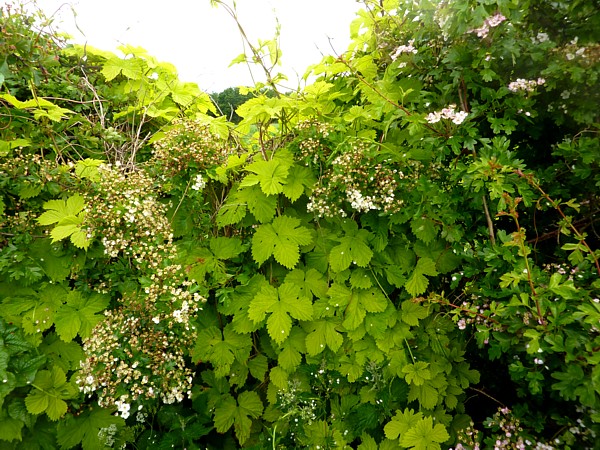 We saw several white butterflies in the fields, and a Speckled Wood on Ivy along Chapel Lane. Then we crossed to the footpaths through the wheat and barley fields. A Grey Partridge clattered out of a low crop. We saw a Whitethroat with food in its beak, which was probably nesting amongst the Brambles in the ditch. We heard the songs of Yellowhammer and Skylark, and saw Song Thrush, Starling, Reed Bunting and House Martin. A black plastic milk crate by the side of the path had several 7-spot Ladybirds and a few Wolf Spiders. This one seems to be carrying her egg-case. She doesn’t seem to be the Rustic wolf spider (no pale band) so she’s probably the Common Wolf Spider Pardosa pullata, but I’m not very sure. (Added later. Chris F tells me she was the Spotted Wolf Spider Pardosa amentata) 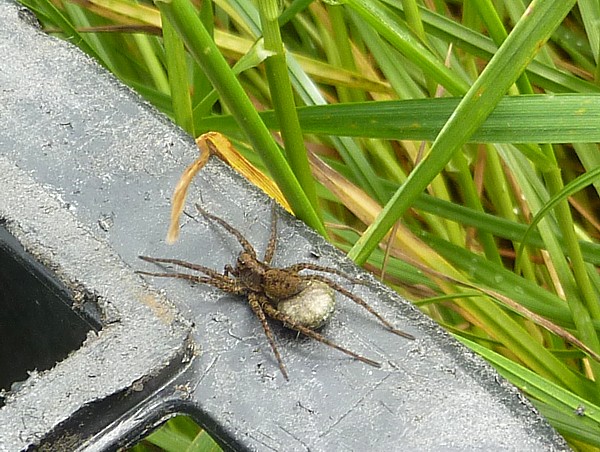 Further on, Margaret spotted a Ladybird, laying her eggs on Cow Parsley. We did a bit of spot-counting (13? 18?), but in retrospect I think it was a Harlequin, because the spots are so irregular. 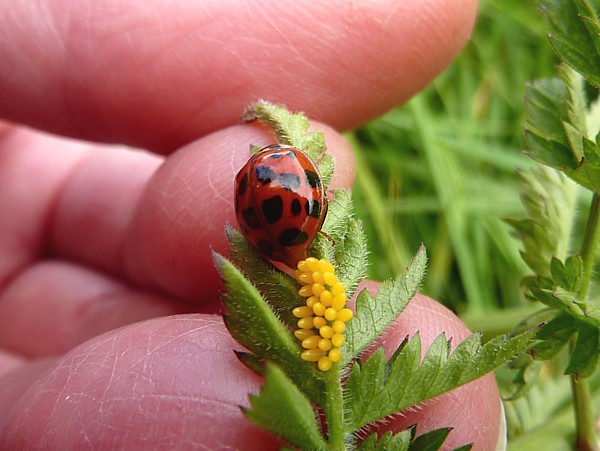 Coronation Gardens near the Black Horse has the Cronton War Memorial and a set of very rare five-holed stocks, which we all wanted to play on! 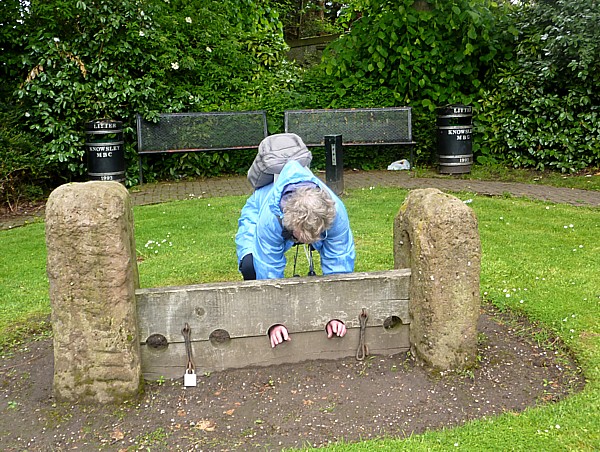 We sat there for a while, waiting for the bus home, and it came just as the rain started again.

Public transport details: 7A bus from Queen Square 9.54, arriving Pex Hill, Cronton (outside the Sixth Form College) at 10.50. Note that this is just outside the Merseytravel boundary so you may have to pay for the last couple of stops. Returned from the bus stop opposite the Black Horse, Cronton (within the Merseytravel area) on the 7A bus at 2.45, arriving back in Liverpool at 3.40.