Nineteen MNA members joined our first coach trip of 2014 to White Coppice near Chorley in Lancashire. It has been 7 years since we last visited this location on an abysmally wet day. Thankfully today’s similar wet forecast didn’t materialise and we all had an enjoyable outing.  We parked at the small town of Brinscall before walking up Well Lane noting Garlic Mustard a.k.a. Jack-by-the-Hedge Alliaria petiolata, Lady’s Mantle Alchemilla sp. Wood Forget-me-not Myosotis sylvatica and Spanish Bluebells Hyacinthoides hispanica. A Grey Squirrel Sciurus carolinensis was bounding along a tree branch and a road-kill flattened Common Toad Bufo bufo was the first corpse of the year. A number of Cranelies were sat on Nettle Leaves that I later identified as female Tipula vittata with distinctively patterned wings and dark stripes along the sides of the abdomen. 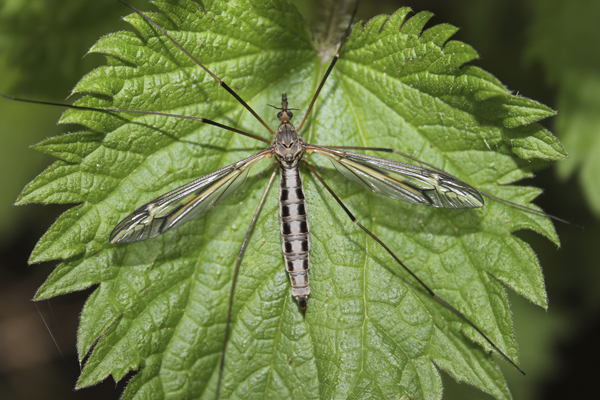 Birdsong continued as we took the path into Hodgkinson Wood with migrant Willow Warblers, Chiffchaffs, Blackcaps, a Garden Warbler and Cuckoo along with a drumming Great Spotted Woodpecker and a Jay. Moss enveloped the stone walls which held masses of Wood-sorrel Oxalis acetosella and there was also plenty of flowering Bilberry Vaccinium myrtillus and Opposite-leaved Golden-saxifrage Chrysosplenium oppositifolium. In a clearing John Clegg pointed out a sun- basking Peacock Inachis io and I also noted a Tawny Mining Bee Andrena fulva and a White-tailed Bumble Bee Bombus lucorum. 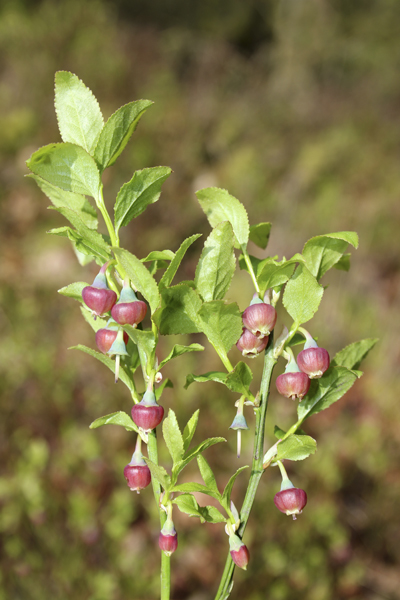 A moss-covered old ruined building had an abandoned bird’s nest. A few of the 8 or so cold eggs were examined and thought to be that of a Robin. A precarious slippery mud path led down the hill. A number of members commented on the orange coating to many of the tree trunks. This is not a Lichen as many suspected but an algae Trentepohlia sp. – the orange pigment haematochrome (β-carotene) hides the green of the chlorophyll. There were a few Fungi finds with masses of Birch Polypore Piptoporus betulinus, a few desiccated Jelly Ear Auricularia auricula-judae, Blushing Bracket Daedaleopsis confragosa, Common Tarcrust Diatrype stigma, Small Stagshorn Calocera cornea and Common Grey Disco Mollisia cinerea. In a boggy area beside the Black Brook at the foot of the hill I found a couple of Common Frogs Rana temporaria one of which posed. 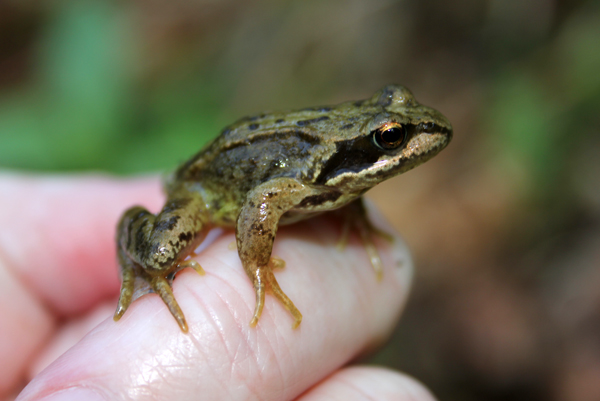 Emerging from the woodland out onto the moorland a Nuthatch was seen entering a hole in a lone tree with another spiralling around the tree’s branches. Examining the trunk of another tree we noted masses of grey coloured Lichen species including Evernia prunastri, Parmelia sulcata and an Usnea sp. The tree’s branches were covered in Polypody Polypodium vulgare. We took a rocky path across the heathland, adjacent trees having suffered storm damage with one Ash appearing to have been struck by lightning. A couple of Tree Pipits looking more monochrome than the Meadow Pipits were seen and a flock of a dozen or so twittering birds were identified as Linnets. 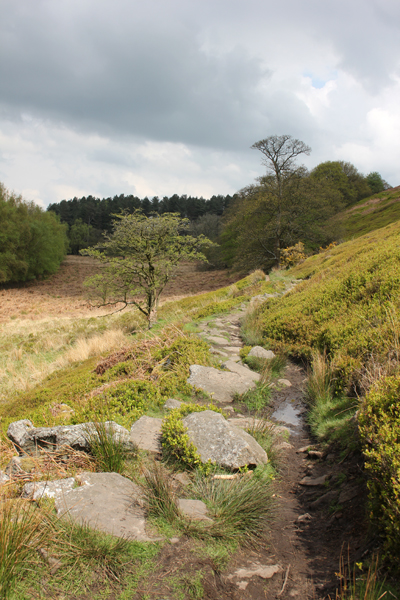 We stopped for lunch at the cricket pitch which was very picturesque with a few olde-worlde cottages at one edge and a large wood pavilion. Pied Wagtails joined Blackbirds and Song Thrushes chasing insects across the turf and a Curlew called from the moors. I had a nose around a Nettle patch adjacent to a stone wall finding a small Stretch Spider Tetragnatha sp. and a male Orange Tip Anthocharis cardamines.

After lunch some of the group joined David Bryant for further exploration of the moor whilst the remainder joined John Clegg for a stroll beside the brook again towards Brinscall. Plenty of flowering Marsh-marigold Caltha palustris in the damp areas and distinctive looking Sedge that was later identified as Common Sedge Carex nigra. 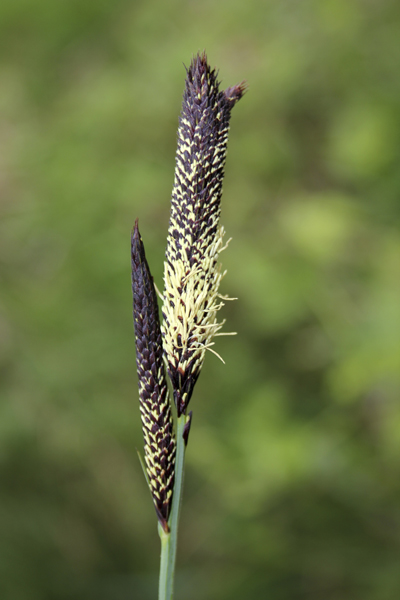 The leaves of Broad-leaved Dock Rumex obtusifolius were covered in Green Dock Beetles Gastrophysa viridula and the leaf undersides held groups of the oval yellow eggs. 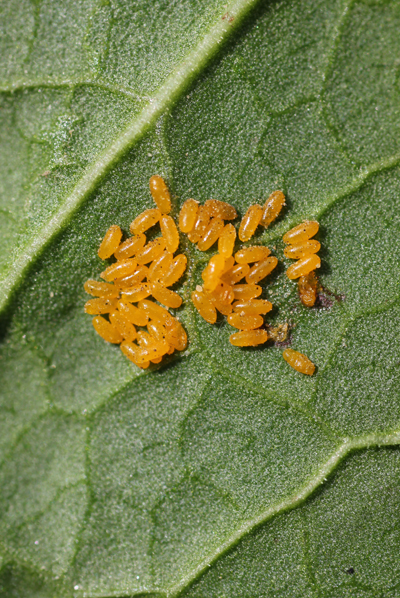 A pair of rusty red horned cattle kept us amused whilst underneath a Birch tree behind them a Rabbit was feeding and nearby male Pheasants were in fine form calling then fluffing out their feathers in display. We watched as a farmer was training his sheep dogs to round up a sow and her piglets at the far end of a field and closer at hand an old breed boar and his two sows were snuffling and routing around in the mud of their enclosure.

At the small fishing lake there were Mallards, a few Muscovy Ducks, Moorhen along with Black-headed and Lesser Black Backed Gulls. Cuckooflower a.k.a. Lady’s Smock Cardamine pratensis was in flower along with Yellow Archangel Lamiastrum galeobdolon. 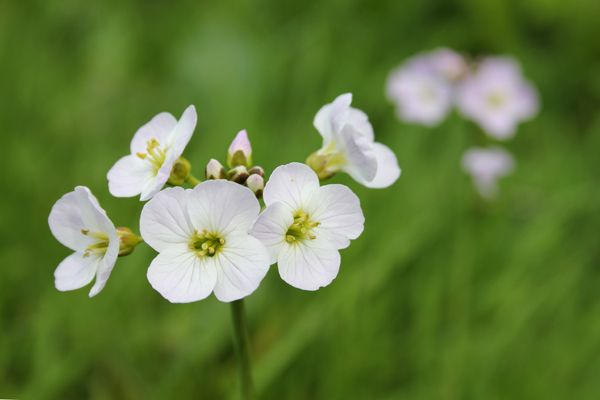 I investigated a small patch of meadow which held Green-veined White Pieris napi, Orange Tip Anthocharis cardamines Small Tortoiseshell Aglais urticae and another Peacock Inachis io. A few insects with a good find of a Bee Fly Bombylius major along with two common Hoverflies – Heliophilus pendulus and the Dronefly Eristalis tenax. Unfortunately the strong breeze was a killer for any macro photography but I did manage to snap a bit of cannibalism with a small male? dark coloured Wolf Spider Pardosa sp. with its jaws tucking into a larger female? 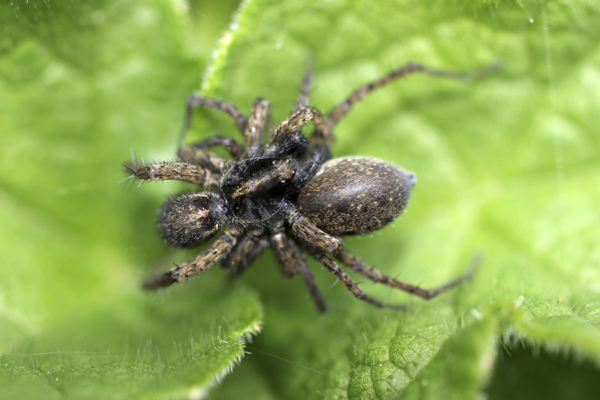