It was clear and sunny, and promised to be a warm spring-like day. We took the train to Hooton and turned onto the Wirral Way. 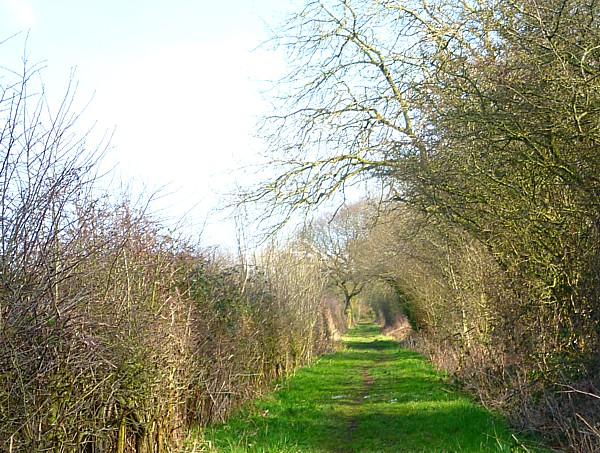 Along the first few hundred yards there are three young Yew trees by the side of the path, each about 8 or 10 feet tall. Were they planted when the Country Park was opened in 1973?  If so, they would now be 40 years old. However, commercial yew hedging is said to grow a foot a year, so maybe they are much younger than that. 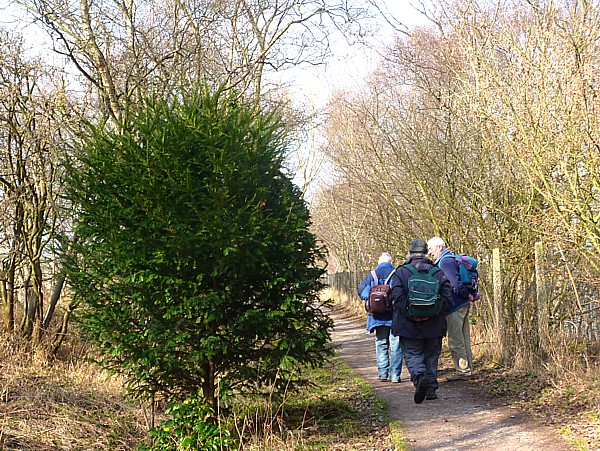 Our first birds were Wood Pigeons, then a Robin singing in the bushes, followed by a Goldfinch pecking about some roots.  We probed a hole in the bank, and found it to be at least 3 feet deep. It was too small for a fox and had no foxy smell. Could it have been a rabbit hole? There were lots of small scrapes in the area too, but no other definite burrows. A dead branch had a fine collection of bracket fungi with chestnut-brown tops, probably Artist’s Bracket Ganoderma applanatum. (Added later – no it isn’t, it’s Blushing Bracket, Daedalopsis confragosa. Thanks Sabena.) 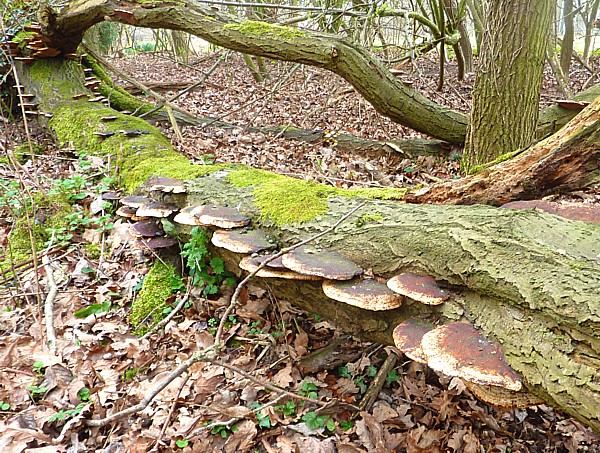 Overhead, a small group of Goldcrests flitted about in a tree and we paused to listen to a Chiffchaff, the first of the year. It was only singing a short song, perhaps three or four repeats, so maybe it had just arrived from Africa and was tuning up.  We also heard the call of a Great Spotted Woodpecker and some Jackdaws cawing from the woods. Long-tailed Tits passed through and we stopped to watch three Buzzards soaring high above. Our first Coltsfoot flowers were out, and an early Cow Parsley on the verge. 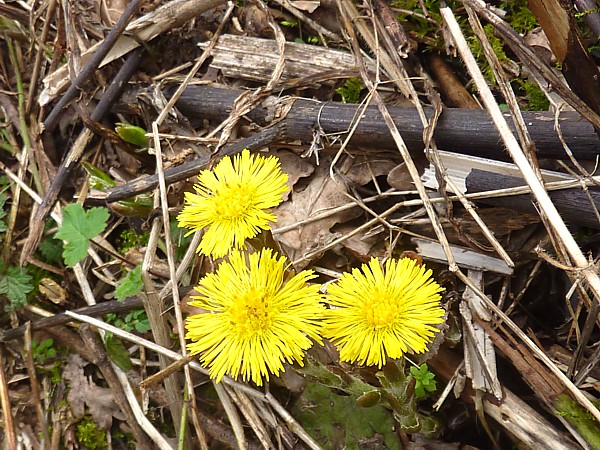 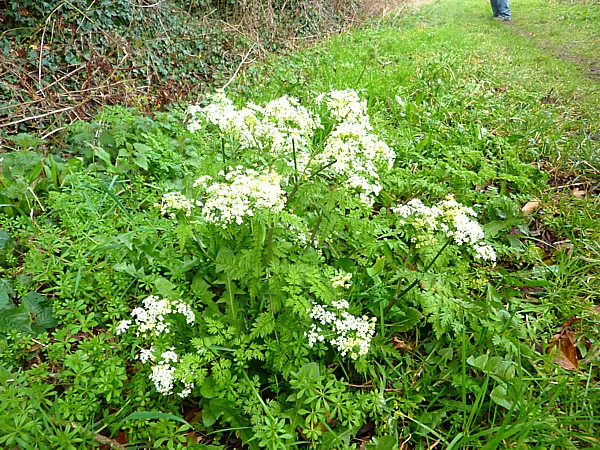 An early Bumble Bee – perhaps a Buff-tailed – was going in and out of a damp hole in the ground. She was probably an overwintering queen setting up her new nest. A Lapwing was flying and calling above a horse field, no doubt trying to impress a potential mate. A Jay flew up off the path and a male Blackbird foraged in some low branches. Another possible sign of a mammal was a well-defined run through the grass below a barbed-wire fence. Again, there was no fox smell, and no tufts of badger hair on the barbed wire. We weren’t doing well for mammals! But the birds just kept on coming – Blue Tits, Magpies, Greenfinch and a Dunnock. There was a rich song coming from the woods, a bird singing sets of three or four different calls. It was probably a Song Thrush but we didn’t see it. 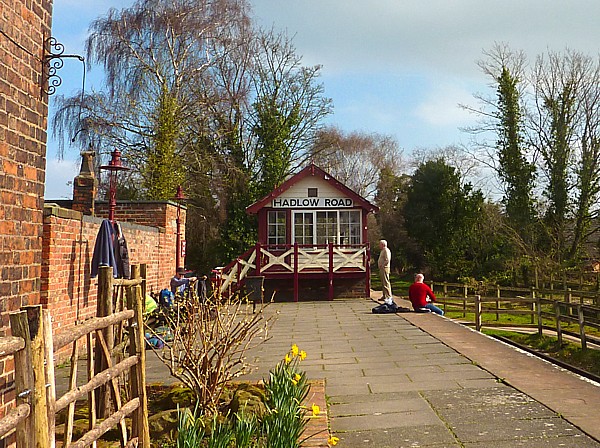 We arrived a Hadlow Road Station for lunch soon after noon. By that time it was so warm that we had to peel off layers of jumpers to eat in our shirt sleeves. It turned out to be the hottest day of the year so far. A Kestrel swooped past, putting up half a dozen Wood Pigeons, then a Sparrowhawk came past on patrol. We spotted a butterfly going past the signal box, which turned out to be a Brimstone, tempted out of hibernation by the warmth.  In the flower bed in front of the ticket office, Lesser Celandines and Speedwells were blooming amongst the daffodils. 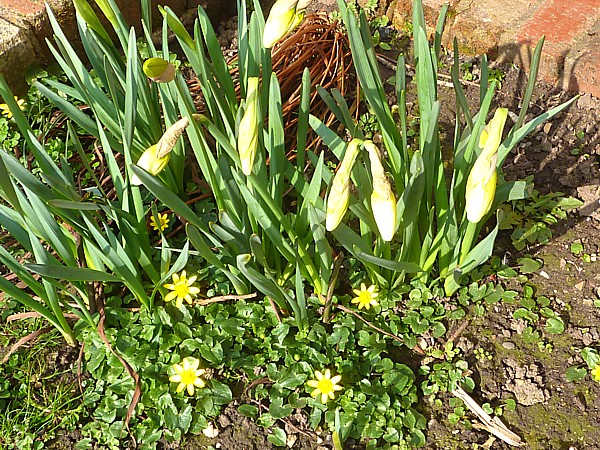 Three ladybirds were basking in the sun. The two red ones were the common 7-spot ladybirds, but we thought for a while that the black one might be the rarer Pine ladybird. But it was just a Harlequin. 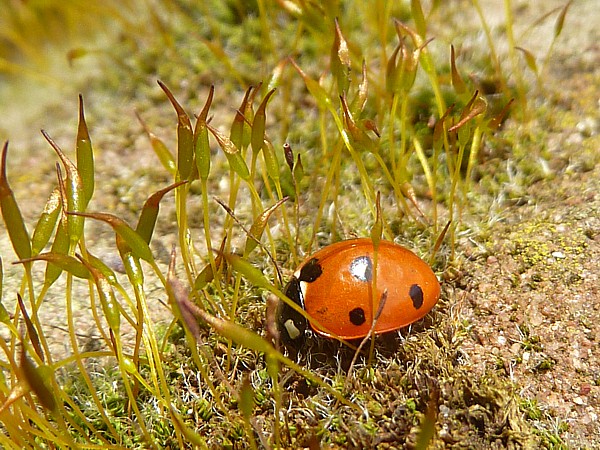 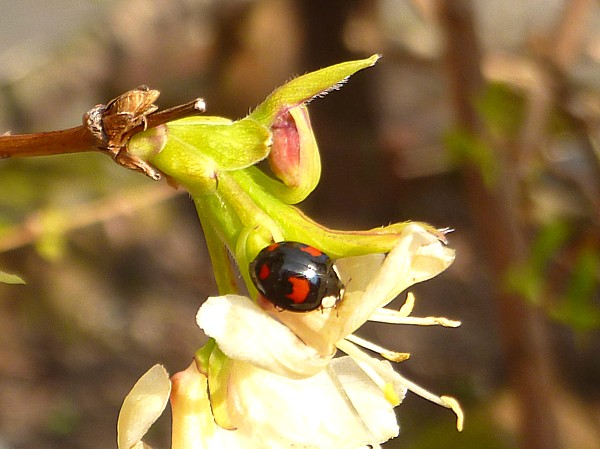 After lunch we walked up to Willaston village. They have some very old buildings there, many of which are Grade II listed, meaning they are of national importance. The oldest was Ashtree Farmhouse, which is half-timbered and early 17th century. Willaston Old Hall has a stone over the door saying 1558 but it is believed to be 17th century. However the Old Red Lion on the green is dated to 1631.  On the green itself the great copper beech was a magnificent sight, surrounded by its circle of crocuses. It was planted on 5th May 1935 for George V’s silver jubilee, so is now nearly 80 years old. 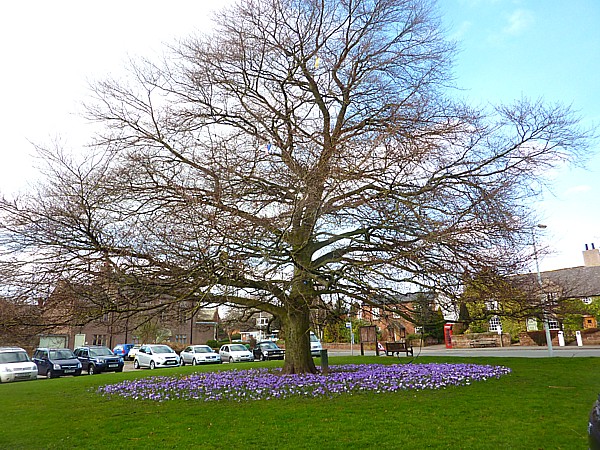 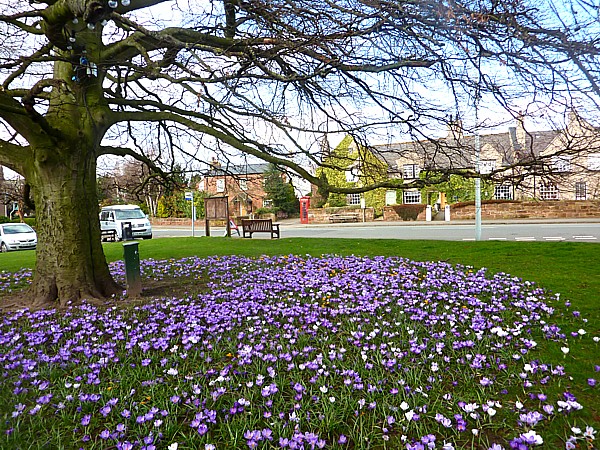 We returned via Smithy Lane, spotting Collared Doves on a rooftop and House Sparrows in a beech hedge. A Great Tit was calling. One field of domestic geese had some impressive lines of molehills right across it.  A mammal sighting at last! 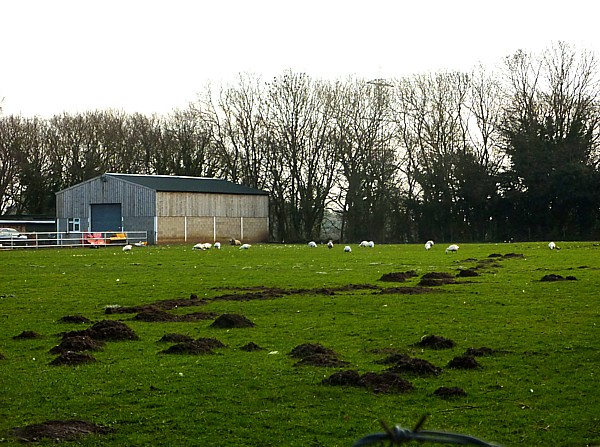 Along a narrow section of the path were three sites of Sparrowhawk kills, all within a few feet of each other. This could be the favourite feeding spot of the bird we saw earlier. 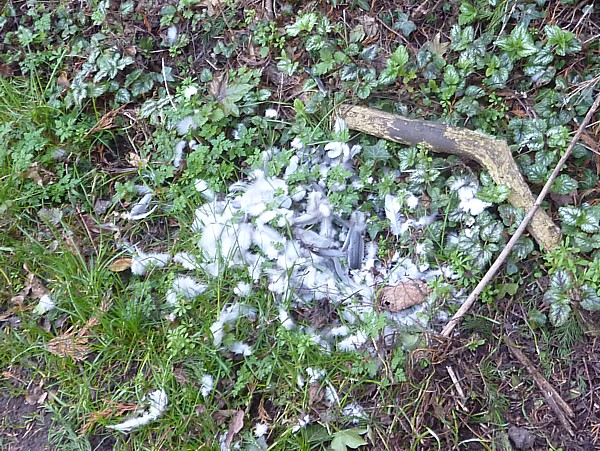 Two Buzzards were flying low together, nearly touching, then separating, engaged in their mating dance. Our last bird of the day was a fleeting Bullfinch in some thin trees, seen when we were nearly back at Hooton.  We had lots of spring “firsts” today, so it’s definitely on its way.