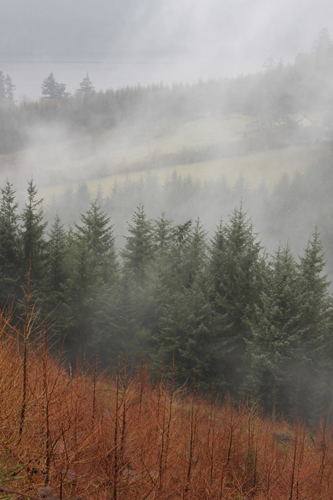 It was a dismal misty, drizzly and cold day for the joint MNA / Liverpool RSPB visit to Lake Vyrnwy.  A good turnout nonetheless with twenty people arriving in shared cars and a minibus driven by Chris Tynan. Our destination was a valley where todays leader Terry Williams often visits at this time of year to watch displaying Goshawks, with Buzzards, Ravens, Red Kite and Hen Harrier often putting in an appearance as well.

We walked along a forest track which climbed steadily upwards via a couple of switchbacks to a spot overlooking the valley. The abundance of lichens growing on the tree branches showed the clear air quality found here. There must have been recent storms with trees blown over and lichen-laden branches scattered around. This allowed identification of a few of the lichen species with Usnea florida – the apothecium show branched eyelash cilia, Usnea fragilescens – a fruticose, pendulous lichen resembling fine hair, Evernia prunastri – a foliose strap lichen with veining present on the top surface of the lobes, Hypogymnia physodes -with foliose thallus, smooth grey lobes above black beneath. 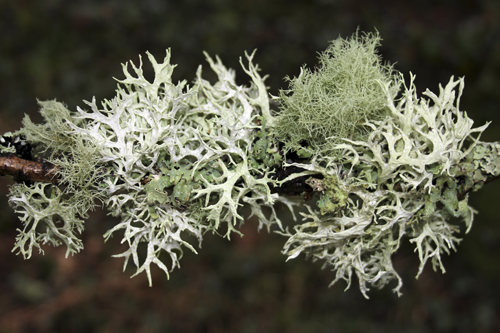 Evernia prunastri and an Usnea sp. 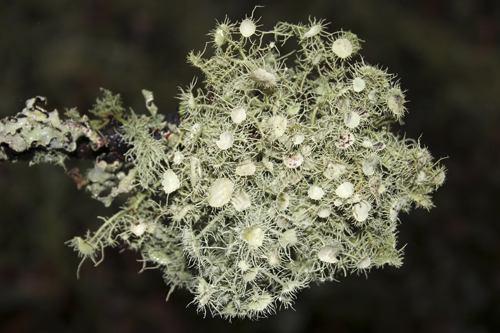 The walk up the forest trail was eerily quiet, the usual bird song and defining of breeding territories that is heard at this time of year was extremely noticeable by its absence. A Mistle Thrush, Wren and Robin gave occasional song with calling Goldcrest, Blue Tit and Coal Tit heard by some. On the top we peered through the mist for any sign of life. Two Ravens flew over one bird being chased from the other birds territory. Another pair of Ravens then from the neighbouring territory flew up from the forest across the valley just to make sure that the intruder was completely evicted from their patch.I had a mooch around photographing a few of the rust coloured rock encrusting lichen Rhizocarpon oderi, the lichen Cladonia bellidiflora with tall unbranched non-fruiting podetia whose surface is clothed in densely layered squamules, various mosses including Star Moss Polytrichum commune and Common Tamarisk Moss Thuidium tamariscinum and Bracken spores. 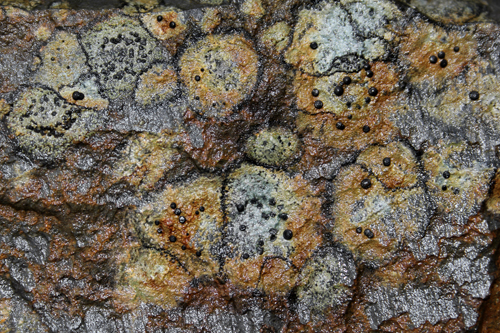 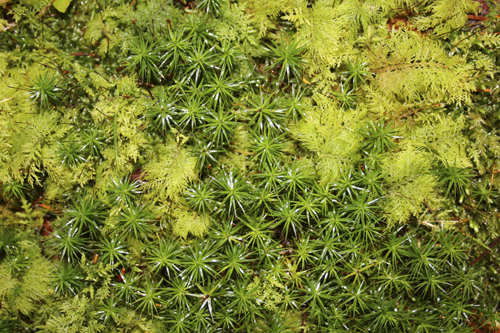 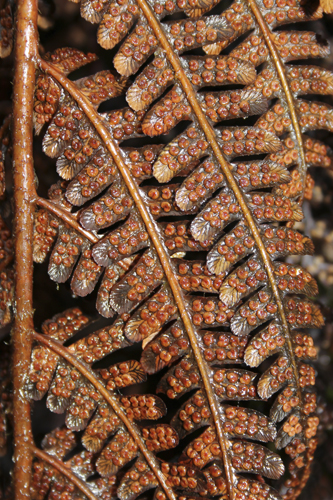 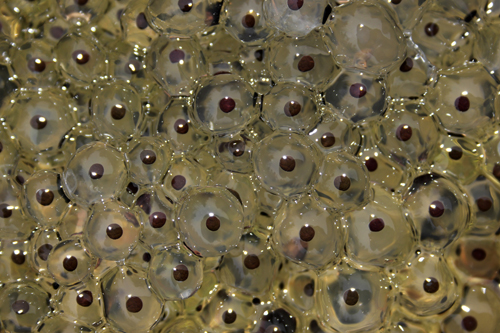 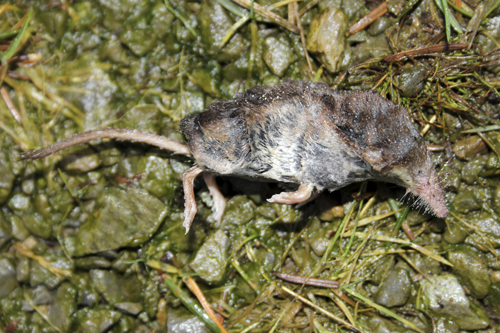 Earlier I had become separated from Mike Barrow, Chris Derri and the two Daves they eventually found the group having seen a Goshawk from near a farmhouse on another forest track. Richard Surman also had Goshawk views from here. While the others remained at the look-out point for a while, the five of us decided to walk back down the track and along to the main RSPB reserve. We walked along a forest track beside the lake for a while noting Common Jellyspot Dacrymyces stillatus the leaves of Wood-sorrel Oxalis acetosella and Oak Artichoke Galls caused by the Gall Wasp Andricus fecundator before continuing along the road, the only birdlife seen on the lake being Mallard and a lone Cormorant. The minibus shot by us as we approached the Victorian pumphouse with its green copper roof the only colour in the misty monochrome landscape. 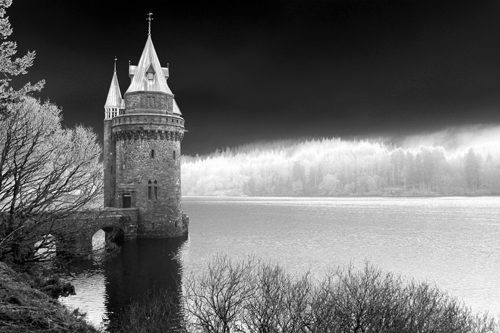 After crossing the dam noting the green coloured Map Lichen Rhizocarpon geographicum on the dam wall we met up again with the others in the hide overlooking the feeders. Three Crossbills had been seen by some as they descended the forest track. Plenty of activity on the feeders with twenty odd Chaffinches some suffering from clubfoot, a couple of Bramblings skulking underneath some branches occasionally popping out to allow comparison to the Chaffs, a Blue Tit, a few Coal Tits, a lone Marsh Tit, half a dozen Siskin and Pheasants on the ground below hovering up any spilt seed.