It was a beautiful sunny day, with golden leaves falling and a Wood Pigeon and a Blackbird working through the red berries on my own Cotoneaster as I started out.  A lovely day for the Liverpool Marathon. We met at Central Station, newly refurbished at ground level and on the Wirral Line platforms, but not yet open for the Northern Line. After a rail replacement bus from Birkenhead North we strolled down The Kings Gap to the beach, where we met Chris Butterworth on his way to his WEBS count (Wirral Estuary Bird Survey). 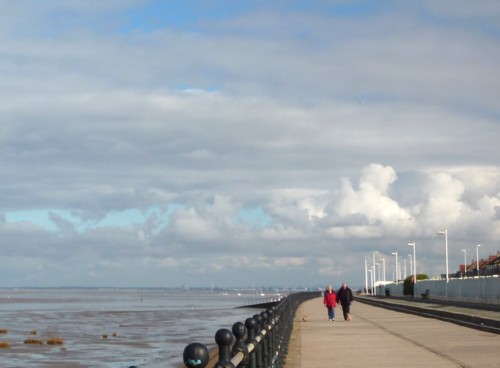 The tide was half way out, and there were thousands of birds on the shore, all arranged in bands parallel to the shoreline. A few dozen Shelduck were on the water with several hundred Knot and Lesser Black-backed Gulls at the edge and a few Dunlin and two or three Curlews amongst them. Some Bar-tailed Godwits were in the shallows, then a layer of Oyster Catchers, then mixed Herring Gulls, Common Gulls and Black-headed Gulls on the sand.  Amongst the clumps of Spartina grass on the beach some BHGs were holding individual pools and pattering around in them. Over a thousand Oyster Catchers took off, low over the water, heading north-east towards New Brighton. The wind generators on the horizon were still, the sea was sparkling and there was a rainbow off towards Hilbre Island. 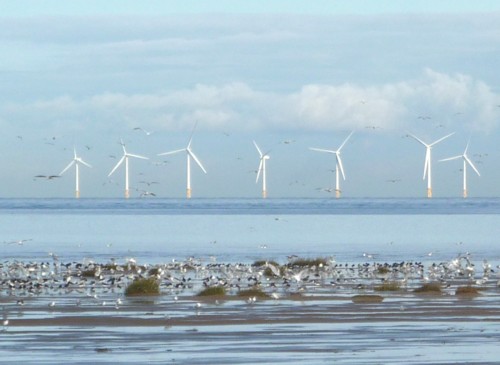 Most of the dog-walkers were close in by the promenade, but as we watched a lady with an energetic dog was closing in on the birds. Luckily she didn’t quite allow her dog near enough to make the birds take flight, but the nearer ones were watching it closely and shifting uneasily. What are some people thinking of!

After a quick visit to the Hoylake Lifeboat Station we had our lunch in the little park off Meols Parade. It’s quite a suntrap there, out of the breeze. House Sparrows were lined up on top of a hedge, watching us curiously and a Robin came down onto the circular Bowling Green, whch was full of worm casts. There was a big bumble bee on the purple flowers of a plant like a Sedum, and we saw a dark butterfly heading out into the Estuary. 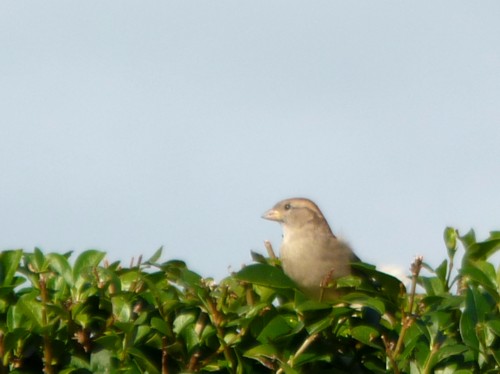 On the little beach by the old Lifeboat Station (now a Museum) a Carrion Crow was poking about in the seaweed. It picked up something round and white, like a pickled onion, and flew off. It was immediately mobbed by two Herring Gulls, hoping to claim its booty, but it managed to hold on to it and got away.