Posted on September 24, 2012 by Sabena Blackbird 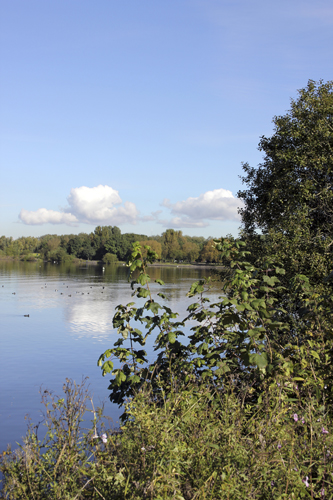 Four MNA members met at Lime St to catch the train to Newton-le-Willows and the 34 bus to Pennington Flash. We were running late and unlikely to meet those members arriving by car by 11am so Barbara phoned the leader Alexander to inform him only to find that he had forgotten he was leading the walk and was in
Belfast! Barbara hot hoofed it round to meet the six others and DaveB, Eileen and I had a pleasant amble round the trail the squawking of Jays noting our arrival. Blue skies overhead and a crisp freshness in the air  great conditions. Tufted Duck, Pochard, Coot and Great Crested Grebe joined the Black-headed Gulls and a Common Gull on the main lake. A sheltered sunny spot held plenty of Hoverflies Helophilus pendulus, Eristalis tenax, Eristalis pertinax, Eristalis abusivus, Syrphus ribesii, Episyrphus balteatus, Leucozona glaucia basking in the sunshine or feeding on the garden escapee Mile a Minute Vine Fallopia baldschuanica along with Blue Bottle Calliphora vomitoria and Flesh Fly Sarcophaga sp. 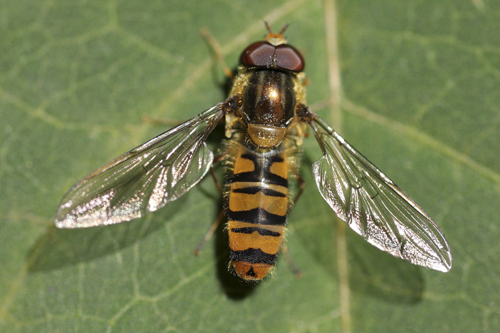 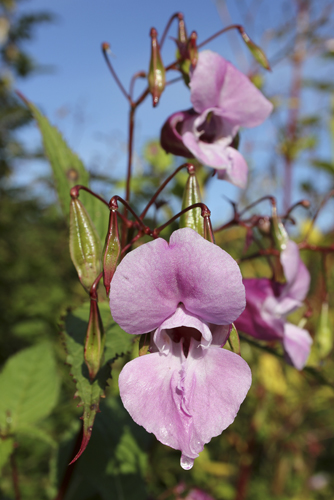 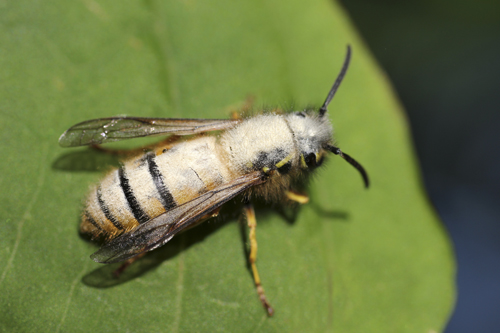 A Migrant Hawker Aesha mixta rested on vegetation and posed for a few pics. This was to be the most numerous Dragonfly of the day with around eight individuals seen patrolling their patch around the edge of the reserves ponds along with three Brown Hawkers Aeshna grandis and a male Common Darter Sympetrum striolatum. 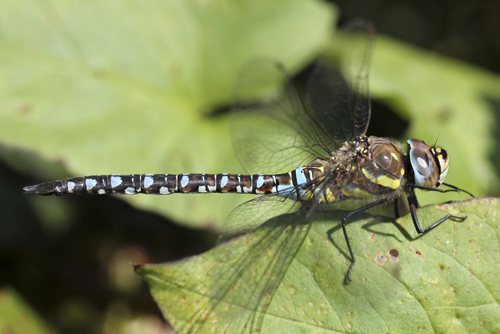 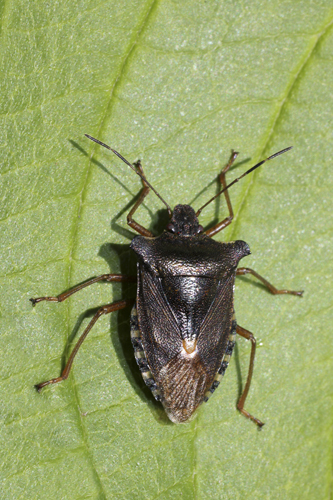 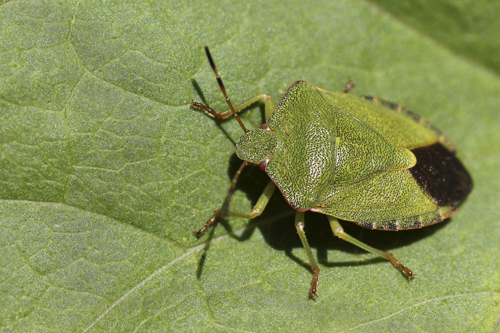 The usual gaggle of Mute Swans, Mallards, Coot, Canada Geese and a Muscovy Duck all vied for the visitors attention and food hand-outs. From Horrocks Hide there were cutey Snipe  around fourteen birds hiding out in the vegetation beside the spit along with Lapwings, Grey Heron and sentinel Cormorants on the wooden posts in the water. Barbaras group had great view of a Kingfisher from here as it flew across and landed on a post before being chased off by a Black-headed Gull before returning again to a post.  From New Hide a Sparrowhawk shot across, the dozen Gadwall mooching on the water didnt even react. We took the detour loop away from the motorway of dog-walkers down to Ramsdales Hide. 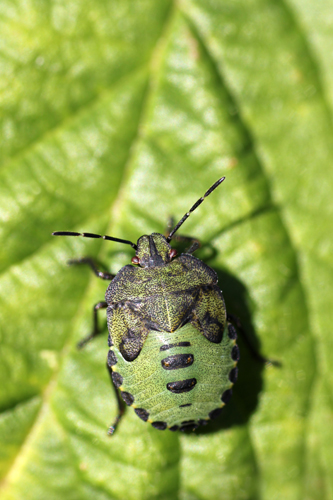 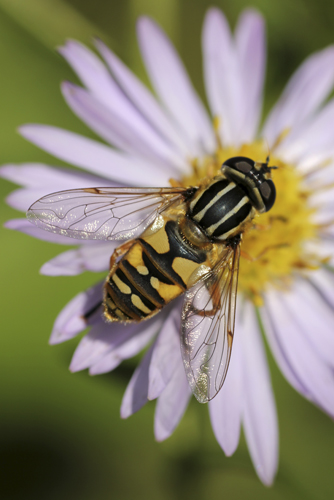 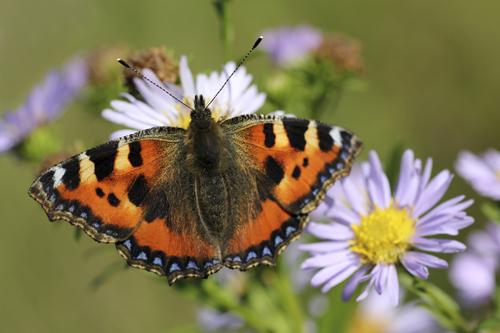 We arrived at the canal bank and watched a group of girls lead their ponies down the zig-zag track through a patch of flowering wildflowers. Most wildflower meadows finished flowering over a month ago so this recently sown area was a real treat with Corncockle Agrostemma githago, Cornflower a.k.a. Bachelor’s Button Centaurea cyanus, Corn Marigold Chrysanthemum segetum and Ox-eye Daisy Leucanthemum vulgare attracting yet more Hoverflies. 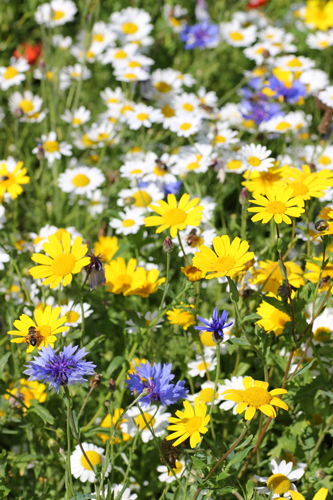 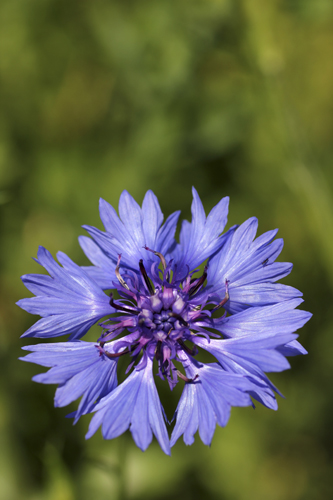 We continued along the woodland track finding a number of the Alder trees held sun-basking Alder Leaf Beetles Agelastica alni – the record was ten Beetles on one leaf and a few Speckled Wood Pararge aegeria. 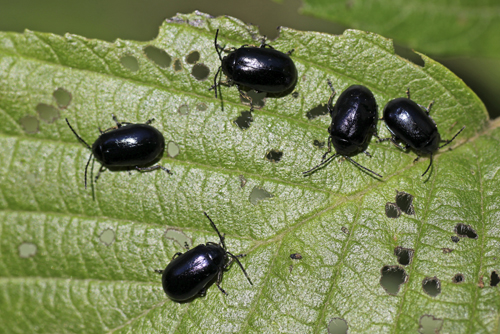 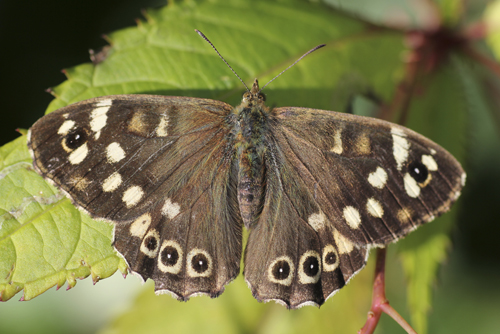 Teal Hide gave good views of Shoveler plus the usual Mallards and Coot.Bunting Hide came up trumps, the feeders attracting a couple of male and a juvenile Bullfinch, plenty of Chaffinch, a family group of eight Greenfinch, Blue Tits, Great Tits, a few Coal Tits, two Willow Tits, two Nuthatch, one of this years juvenile Robins, Blackbird, three Stock Dove, five Mallards, eight Magpies and a couple of Grey Squirrels. We watched as a Greenfinch performed the splits with feet on adjacent feeders, an enormous Magpie clinging to a fat-ball feeder and a lithe Grey Squirrel squeeze through the corner bars of a caged feeder to munch on the bird seeds within  the black sunflower seeds seemed to be its fave. We hoped it didnt eat too much rendering it unable to squeeze back out through the bars. A Great-spotted Woodpecker called and flew across as we left the hide before we returned the bustle of the car-park. We finally caught up with Barbara and exchanged sightings before it was time for our return home.