For a change, after the last few weeks’ rain, it was a dry, sunny, and almost warm day. The bus dropped us at the Menlove Avenue entrance to Calderstones Park, and we wandered across, admiring the trees as always, and looking for birds. There aren’t many about at this time of year, just Blackbirds, Wood Pigeons, Magpies and Carrion Crows. We heard Greenfinches calling and a cheeky House Sparrow flew in through the open door of the café, pecked at a few crumbs, then flew out again. By the lake there was a super close view of a Heron perched in the trees, and a gang of Canada Geese were hanging about on the far bank. The only butterflies we saw were Speckled Woods, a pair dancing in the shadow of a yew tree.

We were at Allerton Park Golf Course in time for lunch by the teeing-off area, then took the path to  Allerton Tower Park. Ruth found a golf ball by the side of the path and lobbed it back through the hedge, hoping it wouldnt confuse a golfer with a poor aim!  Near the ruins of the old Allerton Manor House we looked at the 18th century sandstone obelisk, which used to mark the end of a tree-lined avenue leading to Allerton Hall. One side is pocked by (reputed) bullet holes, which probably got there by target practice along the avenue, and not as a result of a firefight. 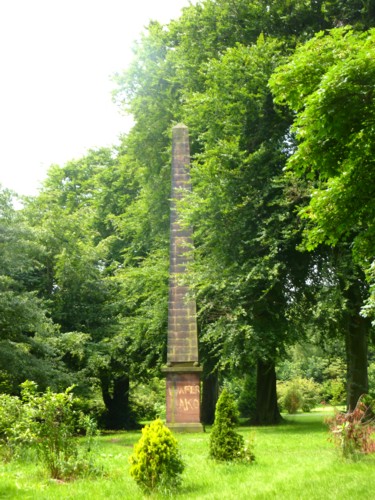 The burnt Irish Yews near the Orangery, which I mentioned in August 2010 and February 2011, are still struggling. One is growing well, another is sprouting on one side but the other four are still cut-back stumps.

The walled garden was an oasis of calm and quiet. Nobody was about because Andy Murray was competing in the Wimbledon Men’s Finals. 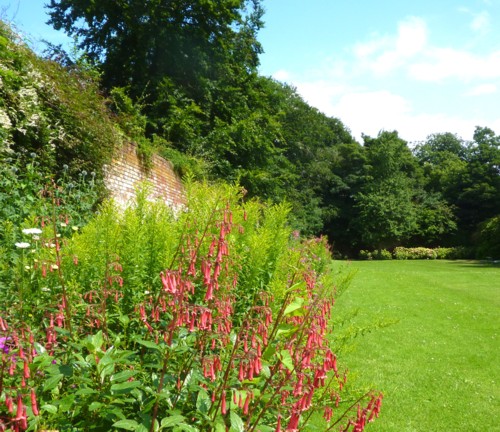 We took the chance to collect and bin some litter, including two empty wine bottles from some late-night debauch. Then off to Olive’s for cream scones and tea. Thanks Olive!