Terry, Dave Bryant and me headed up to Hay Bridge, the private reserve owned by the John Strutt Conservation Foundation (JSCF) nestling in the Rusland Valley in Cumbria. As ever we were to have a wonderful day with a variety of birds, reptiles, insects and plants. We headed down to the compost heaps where we found a Slow Worm Anguis fragilis and around eight Grass Snakes Natrix natrix, one of which slithered away between Terrys legs! A Meadow Ants Lasius flavus nest was in one of the heaps and the adults quickly began removing their larvae to shade when we peeled back the tarpaulin cover. There were a few recently shed snake skins and with a bit of technical assistance with Dave holding one of the skins I took a close-up of the head showing the clear lens that would have been over the snakes eyes. 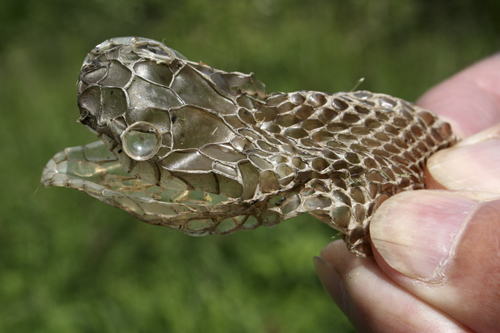 We wandered down to the river through the fields. During last years drought in the Rusland Valley the cows werent grazed in these fields and a number of grassland species shot up including Ox-eye Daisy Leucanthemum vulgare, White Clover Trifolium repens, Yellow Rattle Rhinanthus minor and Yorkshire Fog Holcus lanatus. Theyve decided to continue keeping the cows out until the plants have seeded. Plenty of insect life around here including Grasshoppers, numerous Chimney Sweep Moths Odezia atrata, a few Garden Chafer Beetles Phyllopertha horticola, a Mirid Plant Bug that I later had identified as Leptopterna dolabrata a 5th instar nymph and single Common Blue Polyommatus icarus and Large Skipper Ochlodes venata. 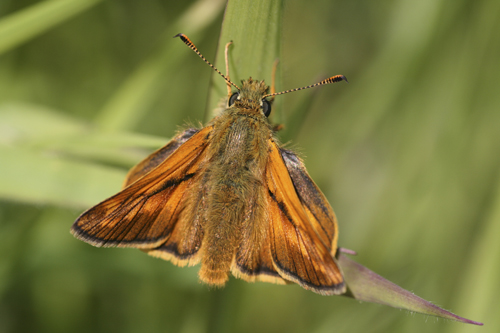 A Spotted Flycatcher was perched on a wire beside the study centre, occasionally dashing up to grab at a passing insect before returning to its perch. The woods held Pied Flycatcher, Blackcaps, Willow Warbler and a few Garden Warblers. Dave had a couple of Small Pearl-bordered Fritillaries Boloria selene flitting around in the sunlight. Tree Pipits were performing their display flights in a few clearings. Terry on raptor watch saw wing-tagged Red Kites, Buzzards carrying snakes in their talons and Sparrowhawk.

At Black Beck Tarn a few female Four-spotted Chaser Libellula quadrimaculata were patrolling their patch of water and Common Blue Damselfly Enallagma cyathigerum, Blue-tailed Damselfly Ischnura elegans and Large Red Damselfly Pyrrhosoma nymphula were in good numbers staying in the vegetation on the tarn edge and a few pairs in copulating wheels on the White Water Lily pads Nymphaea alba. A few Emerald Damselfly Lestes sponsa were perched in their characteristic stance with their wings half-open. 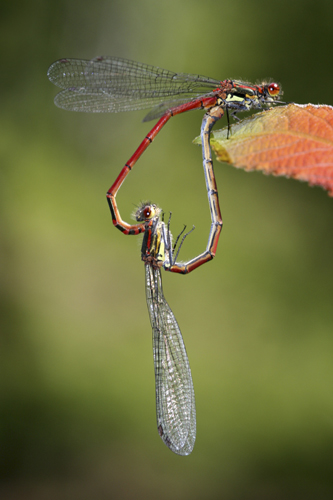 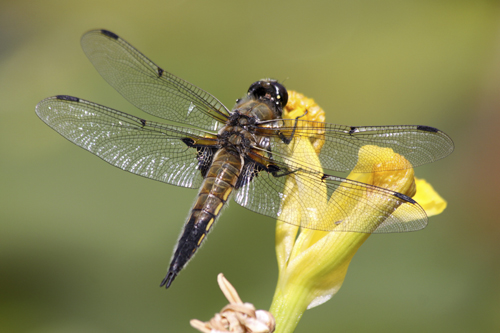 A Longhorn Beetle Rhagium mordax with black spots on its wing cases landed on the grass beside me and walked quickly up the stems occasionally posing for a photo. The larvae of this species feeds on the rotten wood of deciduous trees. 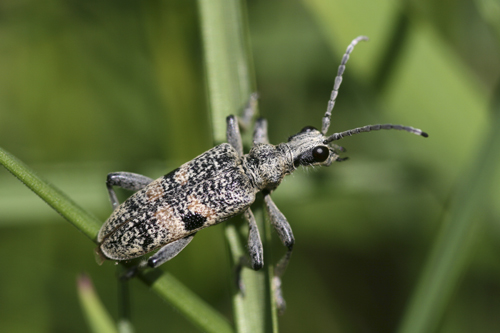 There was a Sawfly Aglaostigma aucupariae, a dozen or so Longhorn Micromoths Nemophora degeerella resting on bracken fronds on the edge on the track passing White Moss Tarn and the Bird Cherry Tree on the track leading to High Hay Bridge again held the larval tents of the Bird Cherry Ermine Moth Yponomeuta evonymella.Returned to the Study Centre for a late lunch and to photograph some of the skulls including those from a two-year old Roe Deer buck, a Hummel Red Deer stag a rare condition where stags fail to develop pedicles on the skull and thus are unable to grow antlers and an Otter. A rather gruesome find in the Study Centre collection was the feet and talons from a Kestrel. 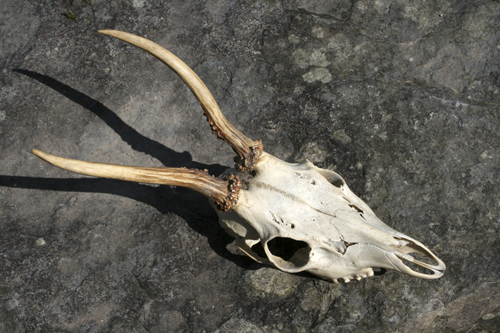 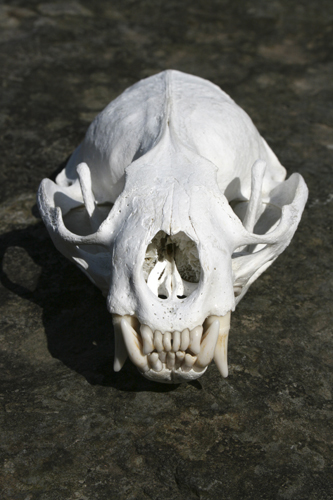 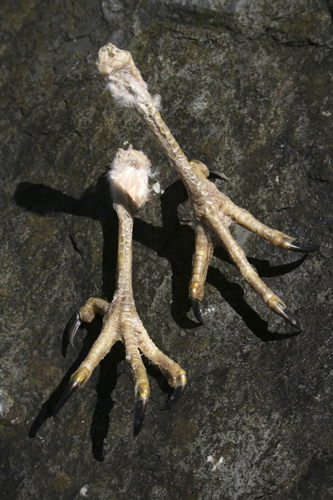 Dave had been out on the mosses where he had seen a number of Large Heath Coenonympha tullia butterflies whilst having lunch. This species favours bog areas and acidic moorland, the main larvae foodplant being Hare’s-tail Cottongrass Eriophorum vaginatum. It has declined seriously in England and Wales and I have never seen it so we headed back along the boardwalk and onto the mosses. As we walked around we disturbed a number of individuals that flew low to the ground with the breezy wind and landed deep amongst the tussocky grass and moss. Eventually I managed a few shots of one nestled in the grass. 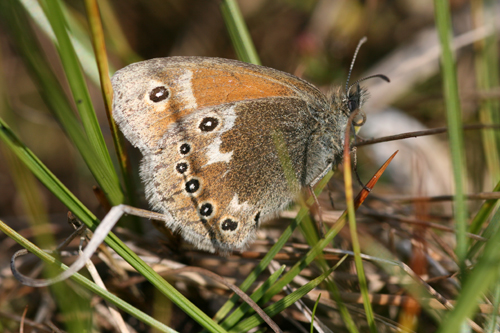 Other finds included Round–leaved Sundew Drosera rotundifolia, Common Milkwort Polygala vulgaris and a Common Lizard Lacerta vivipara basking on a pile of pine logs before quickly hiding beneath the bark. 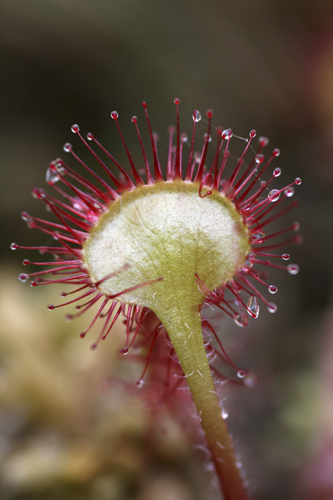 We headed back to the Study Centre and wrote up our sightings into the log book then Helen, the wardens partner showed us a female Adder Vipera berus curled up on the side of a Meadow Ant nest. It frequently basks in this spot and Helen had been past it previously with the lawnmower and it had remained there undisturbed. 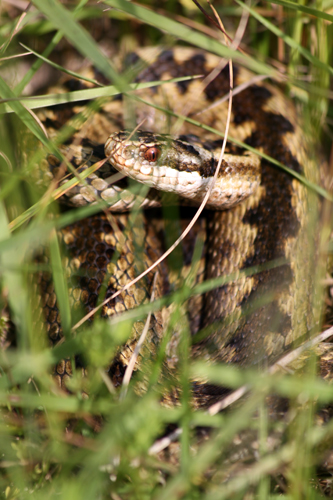 A great finish to the day… but there was more to come…We drove along some increasingly narrow lanes to check out where Roundsea Wood Nature Reserve was located. It is managed by Natural England and is home to Raft Spiders Dolomedes fimbriatus and Dormice Muscardinus avellanarius. As we headed back I spotted a bird of prey circling just above the line of oaks on my side of the car which was joined by another. We stopped the car and Terry identified them as a pair of Honey Buzzards with their wide wings held completely flat when gliding. Top birds to end a great day!