19 MNA members joined the coach trip visiting a new venue for the group at United Utilities Stocks Reservoir near Slaidburn in the picturesque Trough of Bowland, Lancashire. 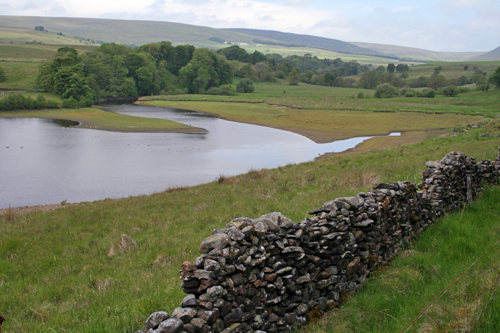 It turned out to be a fantastic day and a place many wish to return to in the future.We began our exploration from School Lane car park located at the north-east of the reservoir. An eight mile trail runs around the reservoir edge but there was so much to see that most of the group concentrated on the immediate area. This first section of the trail also ran adjacent to Gisburn Forest, leased to the Forestry Commission by United Utilities and managed as a commercial coniferous plantation. Plenty of birdlife with Willow Warblers and Blackcaps in good numbers and a single Garden Warbler performing its melodious song that sounds quite similar to a Blackcap for beginners. Wren, Chaffinches, Long-tailed Tits were in song along with Redpolls buzzing away, one of which perched briefly on top of a Sycamore Tree. A bird hide was conveniently located as a lunch stop. This gave views across the reservoir and few exposed sandy banks where we viewed Greylag and Canada Geese, Red-breasted Merganser, Redshank, Oystercatcher, Lapwing, Common Sandpiper, Lesser Black Backed Gull. We continued down through a meadow where Sand Martins and Swallows were zipping around, the former nesting in holes a sandy bank where the River Hodder enters the reservoir. We crossed the Lock Bridge over Hasgill Beck and had a route around in the stream over turning rocks in the hope of finding Freshwater Crayfish, no luck although we did see a shoal of Minnows Phoxinus phoxinus. 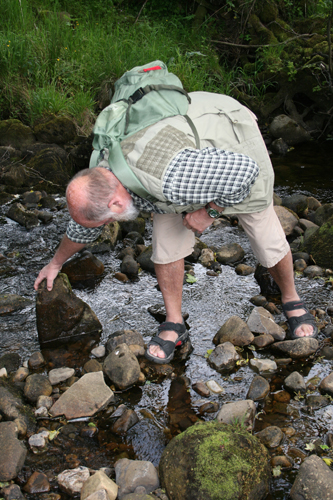 We climbed up onto the fell passing Swaledale Sheep and a small herd of Cows with their calves. 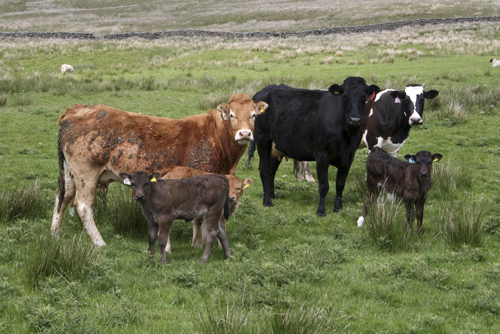 Curlews were flying around calling their plaintive cry, Meadow Pipits were performing their aerial parachute display flight, Skylarks were ascending to great heights whilst singing and a couple of Oystercatchers were flying round one perched giving good views on a drystone wall. Some of the group continued round to the River Hodder and saw a Redstart.

The area was an entomologists heaven both for the sheer number and variety of species. Ichneumon Wasps were a prominent feature of the day. These members of the Hymenoptera order are parasitoids -their larvae feeding on another insect. There are around 1200 species of Ichneumon Wasp in Britain so a couple of specimens were collected in tubes for accurate identification by entomologists in Liverpool Museum. 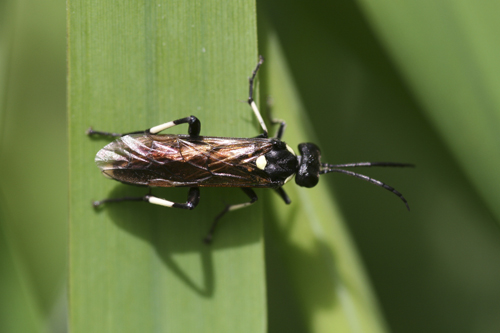 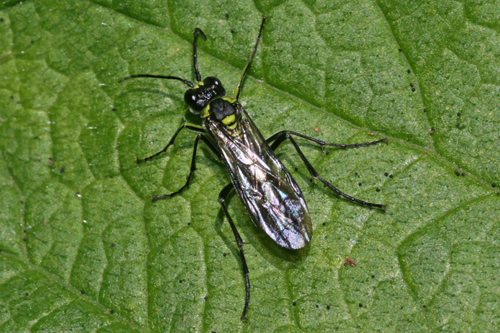 Black and Red Froghoppers Cercopis vulnerata were present in large numbers and their cuckoo spit could be seen splatted on plant stems. 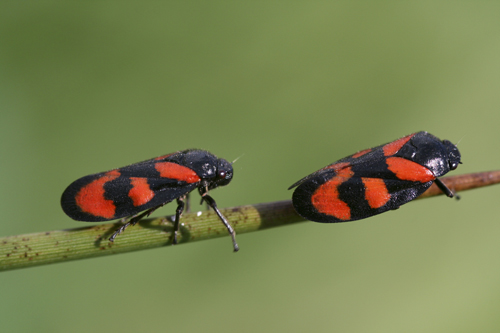 A Common Cockchafer Melolontha melolontha flew in and began feeding on Hawthorn flowers. It was caught and placed on the ground allowing good views of its feathery antennae before taking off. 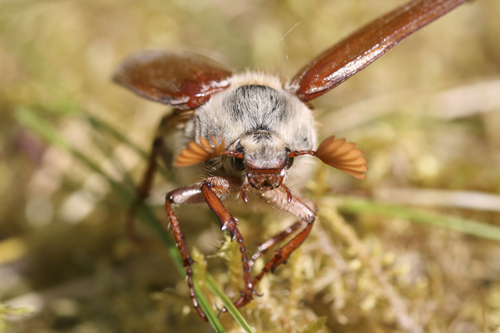 I watched a male Scorpion Fly Panorpa germanica tucking into its lunch of a Soldier Beetle Cantharis nigricans . 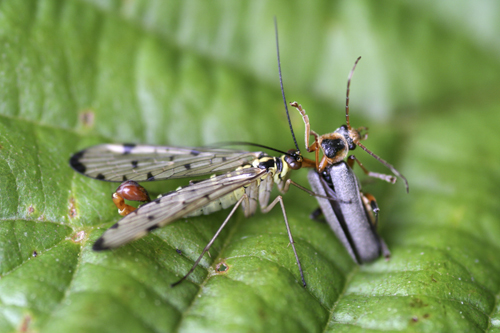 Another species of Soldier Beetle Cantharis pellucida was also seen by many. Green Nettle Weevil Phyllobius pomaceus were full of the joys of Spring and engaged in a bit of bonking. A tiny Weevil Polydrusus formosus only around 5mm in length and sporting a wonderful metallic shine posed on Dave Hardys arm. 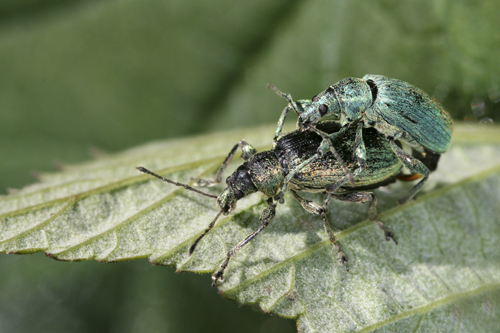 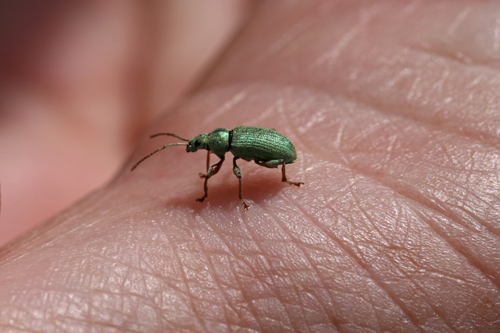 An Alder Fly Sialis lutaria posed nicely. Despite their name they have no connection with Alder Trees, their larvae are aquatic and the adults emerge in May and June. 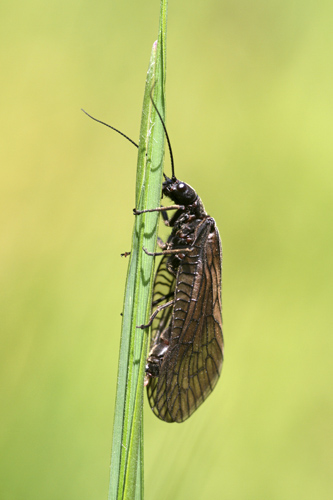 A couple of Spiders including a female Wolf Spider Pardosa sp. carrying an egg sac and the Spider Tetragnatha nigrita was seen in its typical resting position that gives rise to the family name of Stretch Spiders. 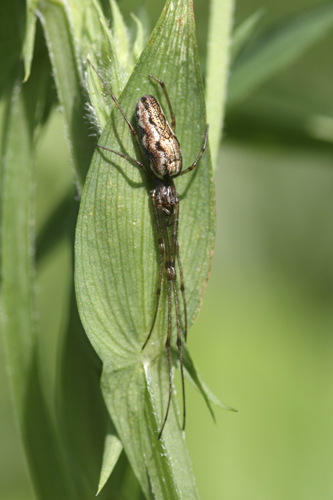 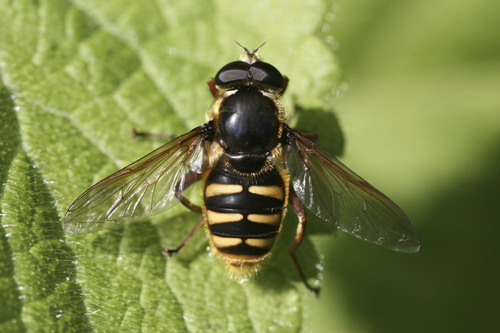 Many species of Diptera were seen but again this is a specialised field for accurate identification, Empis tessellata, Green Bottle Lucilia sp. Yellow Dung-fly Scatophaga stercoraria, Robber Fly Asilidae sp. Flesh-fly Sarcophaga sp. were all seen but there were countless others. 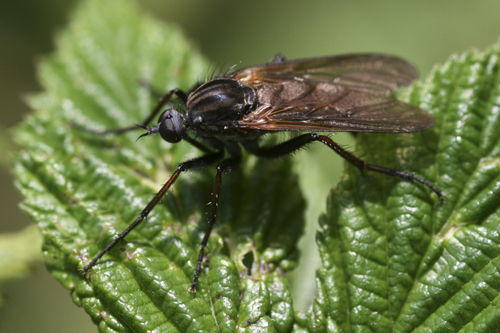 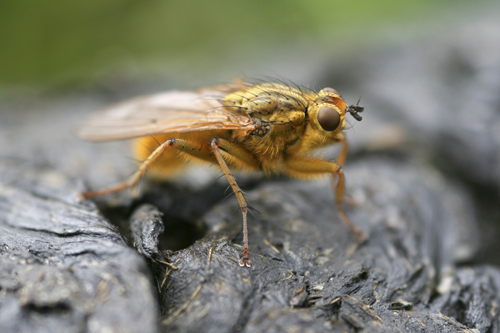 Other insects recorded included Green Lacewing Chrysoperla sp. Click Beetle Athous haemorrhoidalis and a distinctive orange and black Beetle that escaped my camera lens as we sat on the seats in the picnic area at the end of the walk that I later identified as a Sexton Beetle Nicrophorus investigator.

Barbara and co. found a Longhorn Beetle in an upper corner of the Lakeside hide. John Clegg captured it in one of his collecting pots, then let it go on the windowsill of the hide whilst Barbara poised with camera. Harry came along soon after with his Chinery “Collins Guide to the Insects” and the one that most resembled the photo was Rhagium sycophanta. 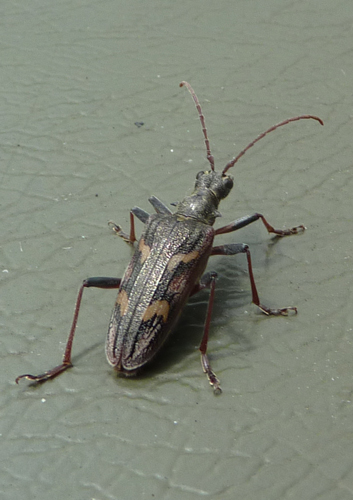 Harry had also seen a reddish coloured Deer earlier possibly a Sika Deer Cervus nippon which are the predominate deer species inhabiting Gisburn Forest.A few notable Butterflies with a male Orange Tip Anthocharis cardamines, a rather washed-out Small Copper Lycaena phlaeas and a few Small Heath Coenonympha pamphilus. Red-necked Footman Atolmis rubricollis was the moth of the day with around twenty flying around the tops of the Spruce Trees and a couple of individuals resting up on vegetation. 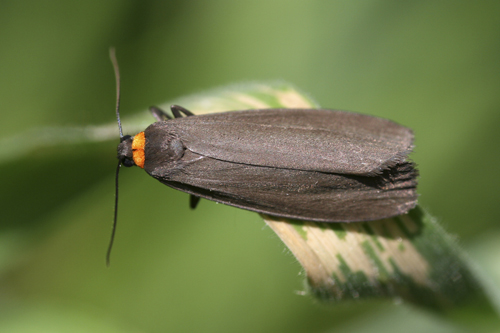 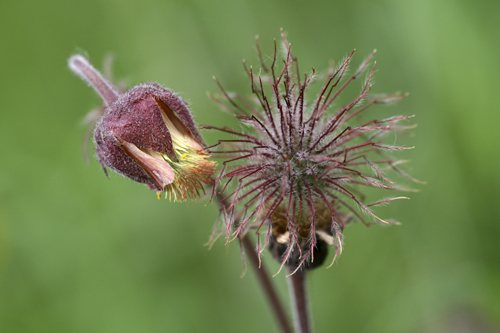 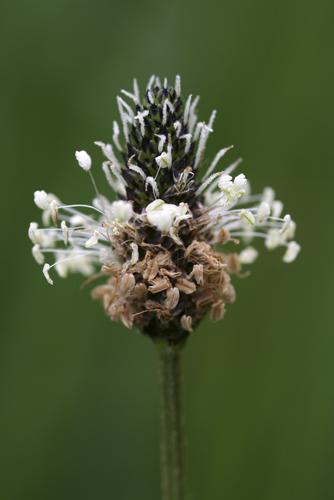