A large group of 30 or so people met up at 11am with Dr Ian Wallace of Liverpool Museum where Shore Road joins the beach at Ainsdale. This was the field meeting organised as a follow-on event to last weekends Shells Training afternoon. We were given some common sense safety advice on beachcombing such as checking the tide times, taking care with the sharp edges of broken shells and avoidance of squidgy cylindrical brown shapes on the beach. We all checked we had remembered our Liverpool Bay Marine Recording Partnership Sheets; trays, sieves and plastic bags from a well known supermarket were handed out to collect our finds then we spread out and headed across the beach towards the sea.

A large variety of Shells were found including numerous Rayed Trough Shells Mactra stultorum – a large wreck of this species occurred in January along the Sefton Coast and there are still many scattered along the beach, plenty of Pod and Bean Razor Shells Ensis species, a few Otter Shells Lutraria lutraria, Common Cockles Cerastoderma edule, a few Prickly Cockles Acanthocardia echinata, White Piddocks Barnea candida and Thin Tellins Angulus tenuis. 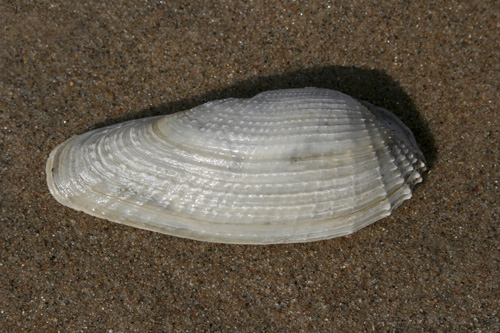 Green round gelatinous eggs belonging to the Green-leaf Worm Eulalia viridis were attached to the sand by a thread or in groups attached to seaweed. There were plenty of Sea Gooseberries Pleurobrachia pileus – the small spherical comb jelly around 2cm in diameter. 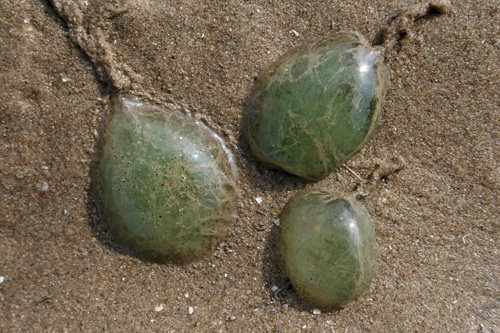 A brown scum over the surface of the sand was caused by diatoms, unicellular organisms whose colouration is caused by its yellow-brown chloroplasts that enable them to photosynthesize. Indeed, tiny bubbles of oxygen produced by this process were visible above the scum. These diatoms are an important food source for some of the filter feeding molluscs. 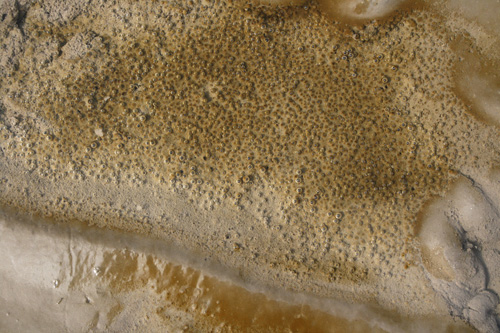 Dr Wallace gave us a demonstration of mud puddling in an area of quicksand much to the amusement of the children in the group. The Cockles and Tellins are moved to the surface and we watched as they began to bury themselves back into the sand. 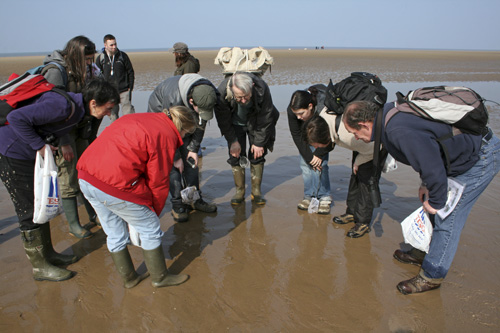 We found a few Common Cockle and Rayed Trough Shells that were black in colour but otherwise appeared as normal. Anaerobic bacteria living in anoxic sediments produce hydrogen sulphide that can interact with iron in the sediment producing iron sulphides that blacken sea shells. This blackening only usually occurs on the shell surface. If more oxidising conditions and iron is present – leading to the formation of ferric oxides then shells can be stained orange.

One of the largest shells found at around 13cm was that of the Icelandic Cyprine Arctica islandica recently re-named as the Ocean Quahog. They are one of the longest lived bivalve molluscs with individuals reaching nearly 400yrs old! They live buried just below the sand with only their small siphon tube extended just above the surface of the seabed. They are an important food source for Cod and are also eaten by people in Norway and Iceland. Over the next few years, parts of the Irish Sea will be given further environmental protection in the form of Irish Sea Conservation Zones. One potential zone runs from Crosby along the Sefton Coast to Formby an area where Ocean Quahogs and Oysters have been recorded as well as the famous intertidal peat beds where Mesolithic and Neolithic footprints from humans and animals have been found. 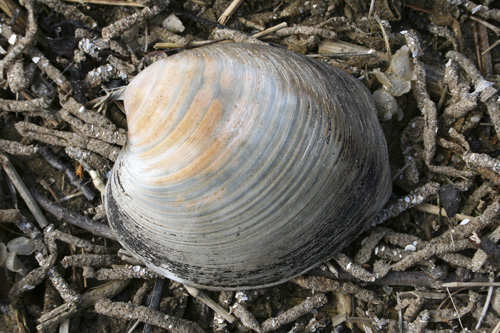 Another interesting find was a piece of cartilaginous material possibly from a Skate and I found a small piece of the soft-coral Dead Mans Fingers Alcyonium digitatum and the remains from a Masked Crab Corystes cassivelaunus. 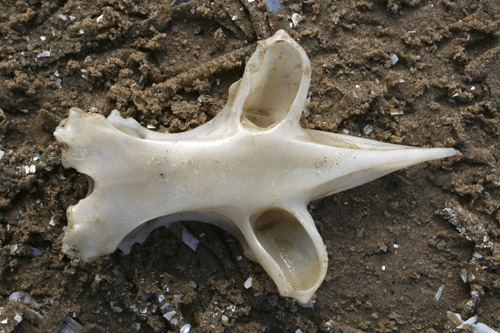 After discussing our finds a few of us wandered along the strandline finding many Sea Wash Balls the egg cases of Common Whelks Buccinium undatum, Sand Mason Worm Tubes Lanice conchilega, Hornwrack Flustra foliacea the bryozoans with broad-lobe like fronds often mistaken for seaweed. 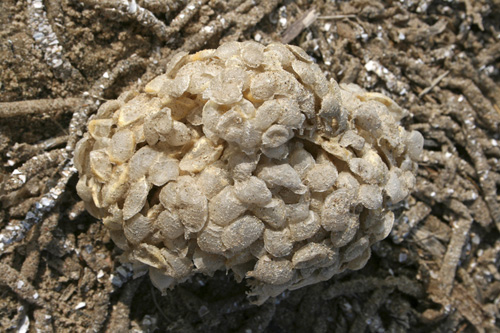 A great introduction to the variety of ‘dead sea life’ that can be found whilst beachcombing on the Sefton Coast.