On a cool, dry and sunny morning we took the 47 bus to Cambridge Road and walked through Potter’s Barn Park. 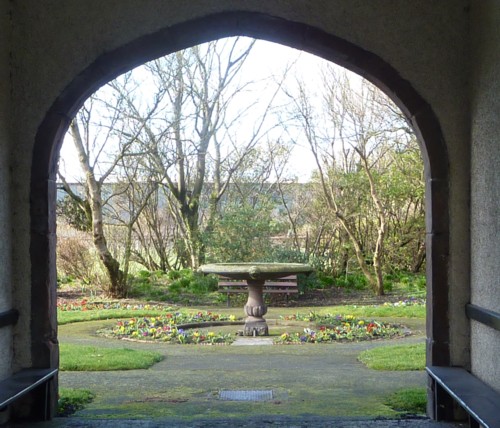 We found some little red apples, the size of cherries, in the water of the disused fountain, but although Margaret looked all around the edge of the area, she couldn’t find a tree they could have come from. 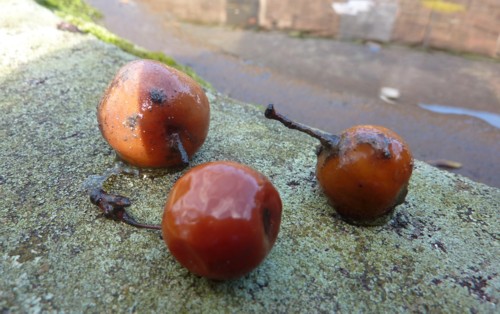 House Sparrows were chirping and a Magpie was building a nest in a tall tree. The daffodils were glorious. 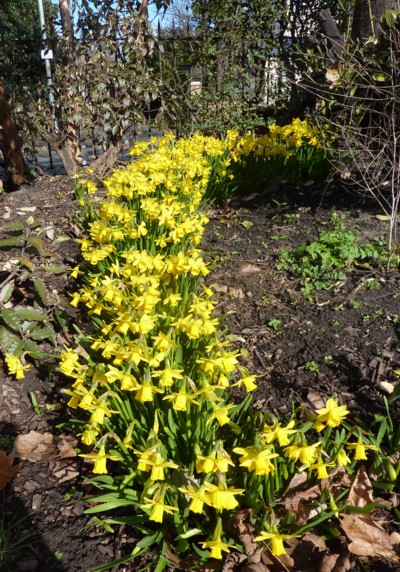 There was a Common Gull on the grass by the car park. We looked through the fence to Seaforth Nature Reserve and saw a Heron, several Shelduck, Cormorants, Coots and Lapwings, about five Black-tailed Godwits, an Oystercatcher, two Pied Wagtails and two Rabbits. The air was clear enough for us to see the snow on the tops of the Snowdonian mountains. The tide was half way out and several of the Iron Men were up to their knees in the sand. There is a plan to move 30,000 cubic metres of sand from Crosby to Hightown this autumn, to bolster Hightown’s coastal defences, which might give them more leg-room. See this article from the Crosby Herald.

We walked along Crosby Prom, hearing Skylarks singing, then doubled back around the Boating Lake.

There were Mallards, seven Tufted Ducks (four males and three females) Canada Geese and a Mute Swan without a leg ring. On the barrier across the lake were Black-headed Gulls and juvenile Herring Gulls. We left some MNA leaflets in Crosby Adventure Centre, then had our lunch in Crescent Gardens. It’s a little sun trap there, with daisies out on the lawns, and we felt warm for the first time that day. One of the group thought she saw a Small Tortoiseshell, but we couldnt find it again. A Dunnock was singing, more Sparrows were flitting about and a pair of Wood Pigeons sat in the trees.  Later we saw a Robin and some Long-tailed Tits.

The houses along Waterloo Gardens have two blue plaques for former residents, one to Edward John Smith, the captain of the Titanic, and one to Thomas Henry Ismay, the founder of the White Star Line.

We explored all four of the gardens after lunch. The northernmost, Beach Lawn Gardens, has a clogged-up pond, where we have seen newts before, but not today. 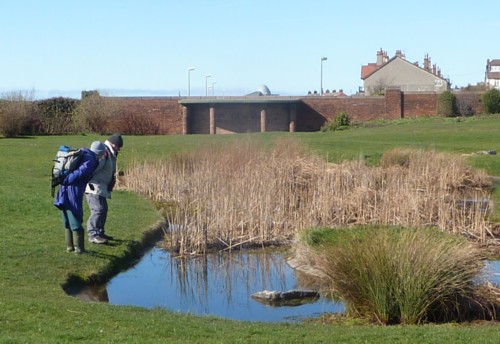 It did, however, have three Common Frogs, two of them in the embrace called amplexus  the male gripping the female tightly while she lays her eggs, fertilising them as they swell into frogspawn. They had obviously been successful, as there were several masses of spawn in the pond. Only the unmated frog was willing to pose for a photo ! 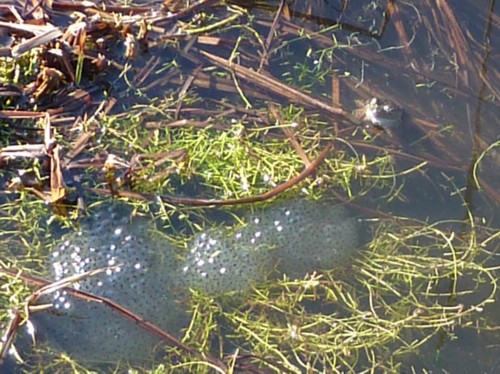 The old fountain pool in Crescent Gardens is derelict, and the Friends of Waterloo Seafront Gardens are running a competition to replace the pool with a sculpture over cobbles. Despite its neglected state, there was still life in it  a water snail, some Water Boatmen and some Dragonfly nymphs.

As we were leaving we stopped to admire a Silk Tassel bush Garrya elliptica with its long male “catkins”. It is a native of the west coast of the USA, only growing within 20 miles of the Pacific Ocean. It seemed quite at home in Waterloo. 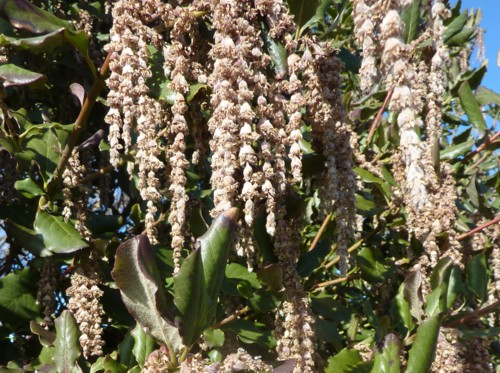