Thirteen MNA members met at Wigan Pier before heading along the Leeds  Liverpool canal. A Robin was perched on a metal fence paying us no attention whatsoever as we walked past it. We were dismayed to see a large amount of rubbish both in the water and along the canal banks. A male Bullfinch softly pheuuingcaught my attention along with a few Great Tits and a Long-tailed Tit. On Pearsons Flash were the usual gathering of Coot, Tufties 60+, Goldeneye I counted 9 males and 14 females but they were regularly diving so I may have missed a couple, a few Teal hiding out on the reed edge and a sign of Spring on the way with a pair of Great Crested Grebes indulging in their courtship display with symmetrical head waggling. A few Buff-tailed Bumble Bee Bombus terrestris queens were flying low to the ground. The young fertilised queens survive the Winter hibernating in a hole or under moss.

Scotsmans Flash was quiet with one of the Coots practising his threat posture ready for seeing off rivals in the mating season, a few Canada Geese, large flock of Black-headed Gulls 120+ some of which were already in summer plumage with their chocolate heads, a few Herring and Lesser Black Backed Gulls and an obliging Common Gull that perched on a buoy allowing some of the newer members to check out its identification features. We wandered down through the reedbed at the south west end of Scotsmans Flash and into the woodland. Good selection of Tits with Blue, Great, Coal and Willow. Goldfinch were twittering away and a male Siskin was hiding at the back of one of the feeders at the feeding station. We continued round to our usual picnic spot at Ochre Flash, clearly the place to be for the local delinquents with a tent, various flysheets, beer cans, discarded pieces of pizza and other rubbish strewn about. 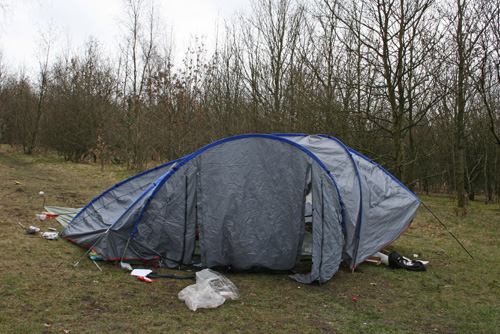 A pair of Mute Swans –  the resident male is fitted with a blue darvic ring FAL, another pair of Great Crested Grebes and a few Teal were keeping to the reed edge. A flock of Fieldfare 22+ were silhouetted in a tree at the back of the flash and a Grey Heron flew in shortly before we continued.

We stopped to overlook the top pool at Bryn Marsh where a couple of pairs of Gadwall were mooching. A Kestrel was hovering over the marsh later landing on one of the electricity pylons and a few of us latched onto a distant Buzzard. A lady walking her Jack Russell was kindly doing a bird seed drop on top of the fence posts. We stopped and watched as the track became alive with small birds taking advantage of the food. A Willow Tit gave great views allowing us to see the pale wing patch along with a Prune (Dunnock to the uninitiated ;), Blackbird, Chaffinch, a Jay plus numerous Blue and Great Tits. At the bottom end of Bryn Flash we watched more Gadwall and Great Crested Grebes plus some Pochard, 3 males and 1 female. We found the newly emerged yellow flower spikes of Coltsfoot Tussilago farfara that has been used historically as a medicinal plant to treat lung ailments.

Fungi finds were disappointing, only Turkey Tail, Birch Polypore and some rather past-it Velvet Shank. I did find a nice collection of Pixie-cup Lichen Cladonia fimbriata on top of a fence post. 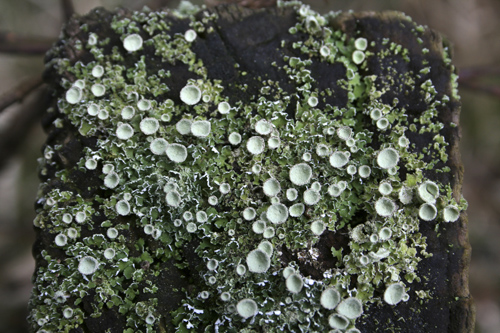 We crossed over the stone bridge and everyone checked out the erupting catkins. Fluffy Goat Willow catkins were joined by Alder  allowing us to distinguish between the small rounded female and long male catkins and last years female woody cones. Further along at Pearsons Flash we made a grim discovery; a Mute Swan cygnet was lying dead on the bank. It was un-ringed and had no obvious sign of injury. Quite touchingly a few other cygnets including blue darvic YF4 and an adult Swan were floating on the water close to the dead bird obviously concerned that it wasnt moving. Nearby on the bank was a dead Black-headed Gull, again appearing uninjured and un-ringed. Dave Bryant later called the warden Mark Champion who was aware of the dead Swan which is to be sent for tests. Some MNA members are already aware of the Mute Swan deaths at Southport Marine Lake, apparently Swans from Pennington Flash and Three Sisters are also being taken into the RSPCA facility at Stapeley Grange for treatment of the mystery infection. 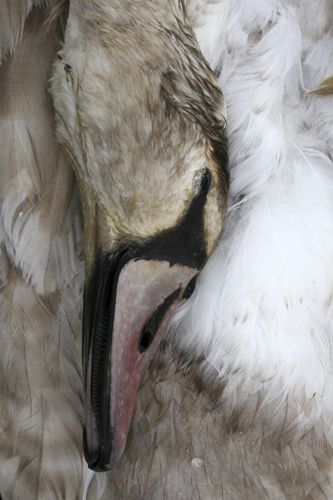 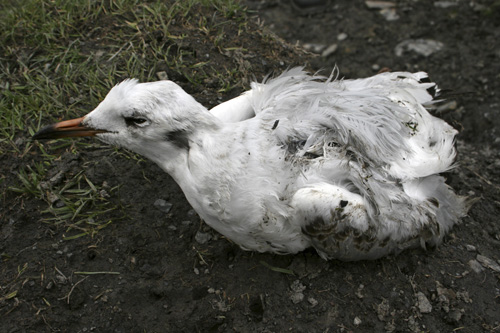 We continued into the wood where we checked out the orange rust coloured filamentous terrestrial alga Trentepohlia aurea that was covering a number of tree trunks. The typical green chlorophyll colour is masked by large amounts of carotenoid pigments. 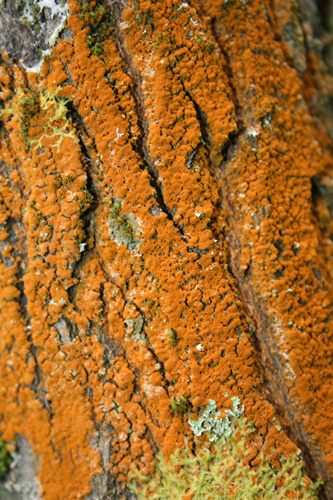 Also examined the Dog Lichen, a species I have previously had confirmed as Peltigera hymenina – it is very common and some had the raised, curled, digitate lobe tips i.e. red-brown “fruiting” structures, or apothecia present. 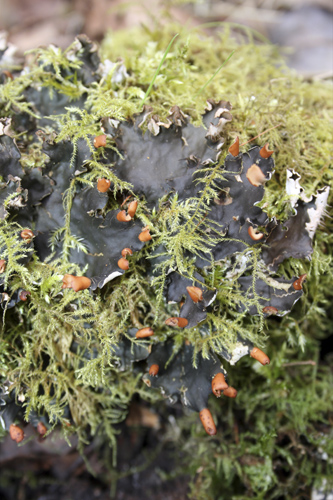 We were all too quickly back to civilisation…