After heavy snow on Friday afternoon, public transport was a problem. The main group met at Central at 10, but despite my leaving home half an hour earlier than usual, the first southbound X2 didn’t appear in Crosby until about 10 so I didn’t get there until 10.40, after the group had left. So I took the next train to Bebington and hired a mini-cab to take me to the Eastham Ferry Hotel.  As we passed Green Lane on New Chester Road I spotted the rest of the gang, who had just come down Allport Road from Bromborough Station.  Success!
The snow was well-trodden on the paths through the woods and there was a very friendly (or hungry!) Robin coming quite close. Also a Song Thrush, a Nuthatch and a Jay. We heard a Great Spotted Woodpecker calling. 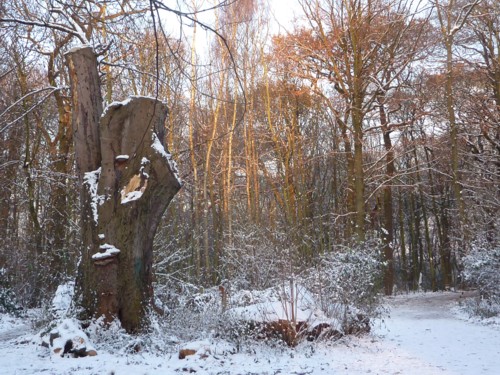 David Bryant went into the Visitors’ Centre to look at the bird feeders at the back and reported that there were EIGHT Robins all feeding together with no signs of aggression. He has never seen so many together.
Then we had our Christmas Dinner at Eastham Ferry Hotel. Good to see some friends who haven’t made it to the walks for a while. Cards were exchanged, one or two beers were drunk, dinner and dessert were happily scoffed then we all trudged back to the main road for the bus back to Liverpool.
Happy New Year to all MNA and Sunday Group members!