We had planned to go to Ormskirk but the 10.10 train was cancelled at the last minute because of an “incident on board”. We didn’t fancy hanging about at Central for half an hour for the next one, so we made a spur-of-the-moment decision to go to Chester, its train leaving five minutes later. From early next year all the Wirral trains will be disrupted, so it may be our last chance for a while. 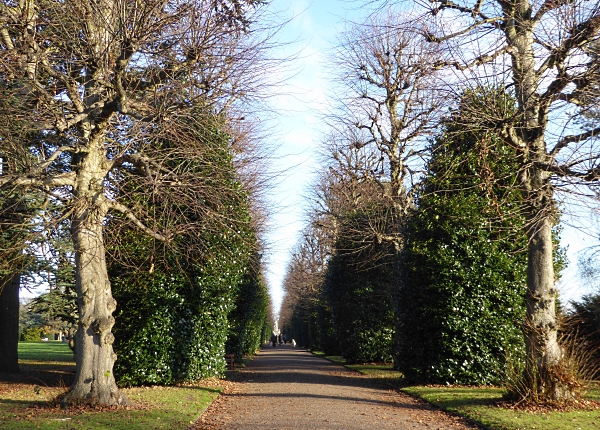 It was a frosty day with brilliant low sun. We headed down City Road, along the canal, down Russell Street and Dee Lane and entered Grosvenor Park at its north east corner. A Grey Squirrel was eating Sycamore seeds right off the tree. 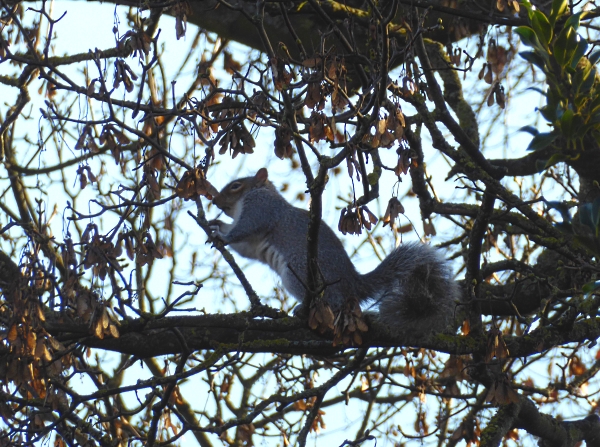 My Tree of the Day was a probable Strawberry Tree next to the Belvedere. I don’t know them well enough to decide if it’s the native Arbutus unedo or the Hybrid Strawberry Tree Arbutus andrachnoides. 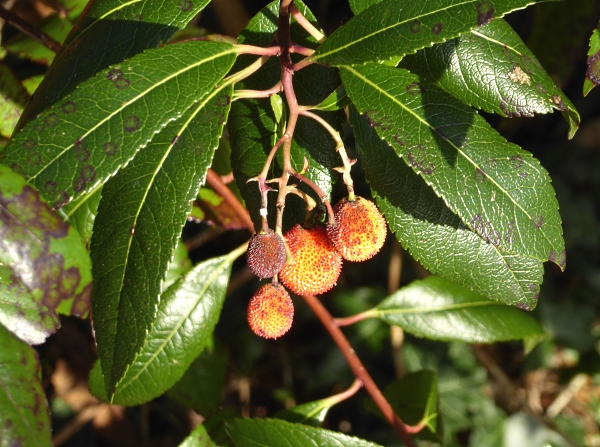 The bark was red, ridged and flaking like the Hybrid. 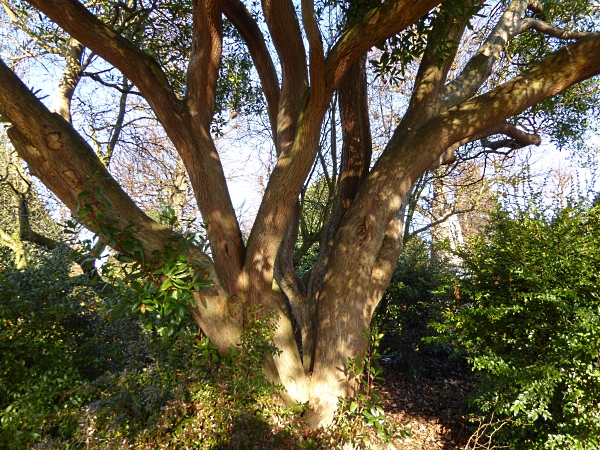 It had a sign underneath saying it was presented by the  Rotary Club in 2005. Even if it was a few years old at the time, it still looks much older than 11+ years. The Hybrid Strawberry Tree is said to be more vigorous than either parent, and it would need to be to attain this size, I think! 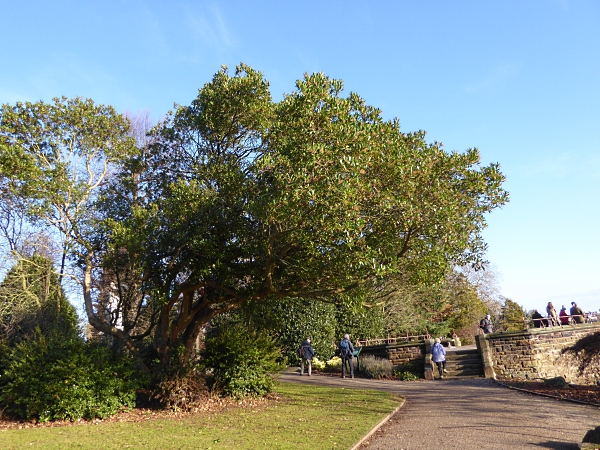 We lunched in the Rose Garden. In the trees opposite was a Persian Ironwood and a smallish Tulip Tree which bore masses of cones. It must have been magnificent when it was in flower. 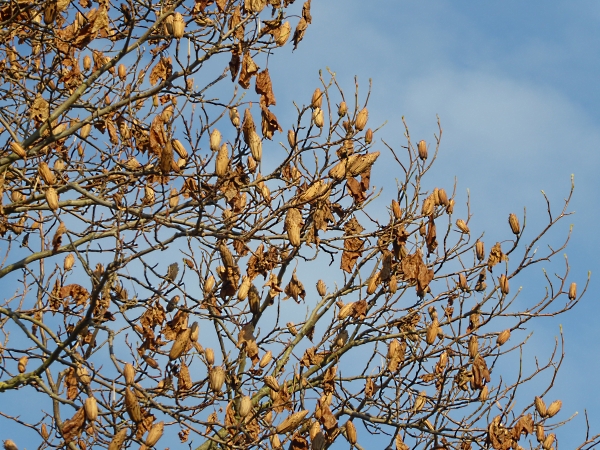 We walked down to the River Dee and along the Groves, then up Souter’s Lane, noting the many scruffy Buddleia growing on the tall walls. Here’s another one just getting started. 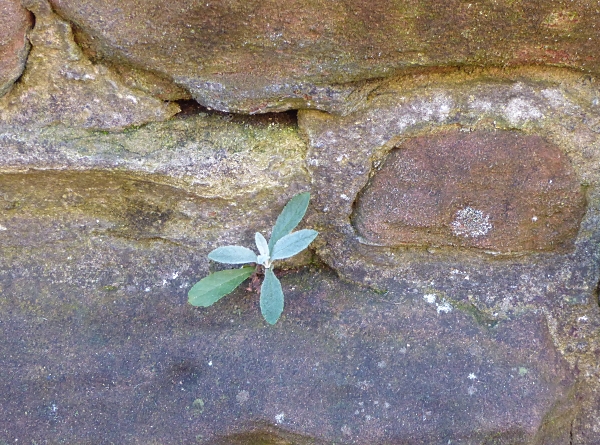 Outside the Cathedral the Christmas Market was bustling. There was the usual knick-knackery for sale, but we were taken by the Christmas wreaths full of bird food. The large ones (below) were £10, and there were smaller ones for £6. 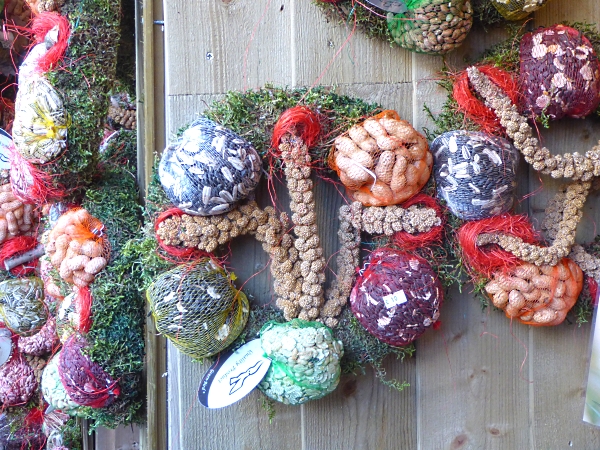 After a walk along the walls we dropped down to the canal again. Many Mallards had congregated under the bridge by the Lock Keeper pub. Was it warmer there, or had the rest of the canal frozen overnight?  Some drakes were inspired by the sunny day to start mating, rather unseasonably early.
A Feverfew was blooming along the wall. 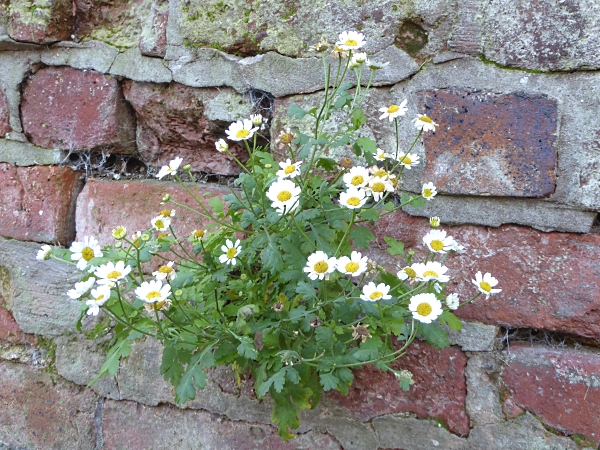 There’s a Rowan tree along there, which doesn’t seem to be of the common sort Sorbus aucuparia because there are 27 leaflets on the leaves, many more than the normal 15 or so. Most of the many-leafleted Rowans have white berries, so I don’t know what this one is, but it’s pretty. 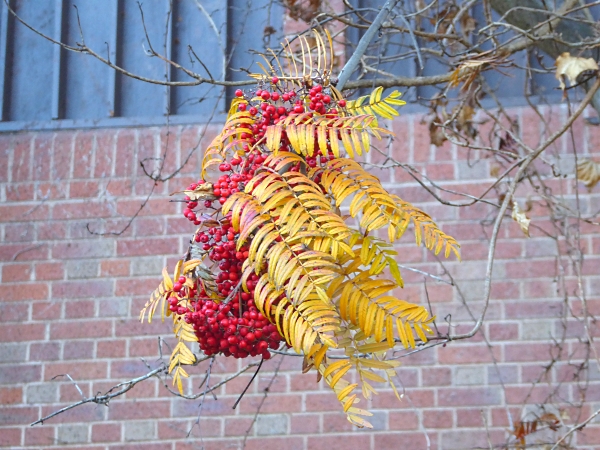