Last week I stayed with my brother and sister-in-law near Stirling and we went about looking (mostly) at trees. One day we went to the Royal Botanic Garden, Edinburgh (RBGE). Amongst the prettiest trees there was this Katsura Cercidiphyllum japonicum. Its leaves are very similar to those of the Judas tree but Katsura’s leaves are opposite, not alternate. Their autumn colours are lovely, and it was already turning pinkish-yellow. The fallen leaves are said to smell of burnt sugar or candy floss. 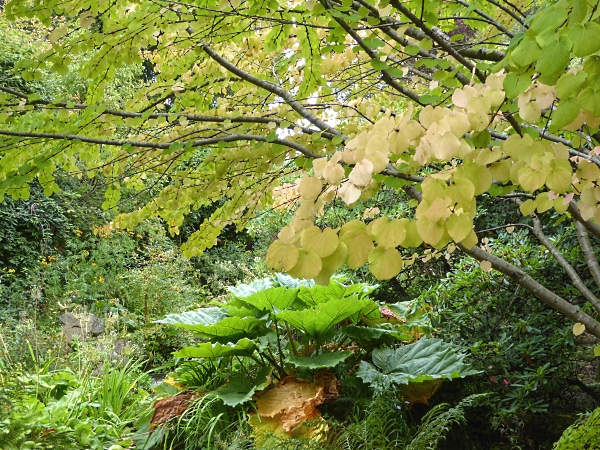 There was a grove of young Monkey Puzzle trees (Chilean Pine) Araucaria araucana. They are threatened in their native Argentina and Chile, so six young trees have been collected from the wild to safeguard genetic diversity, a process known as ex-situ conservation. You can see how varied these three are. 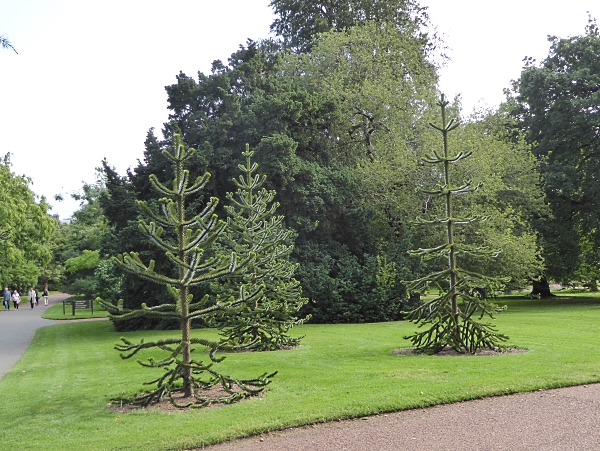 RBGE also has Britain’s biggest plant fossil. It’s the trunk of a Pitus withami (Carboniferous period) which was discovered about a mile away at Craigleith quarry. Behind it is the fossilised root of a Lepidodendron, which grew to 45 metres, but whose only living relatives are now small clubmosses. 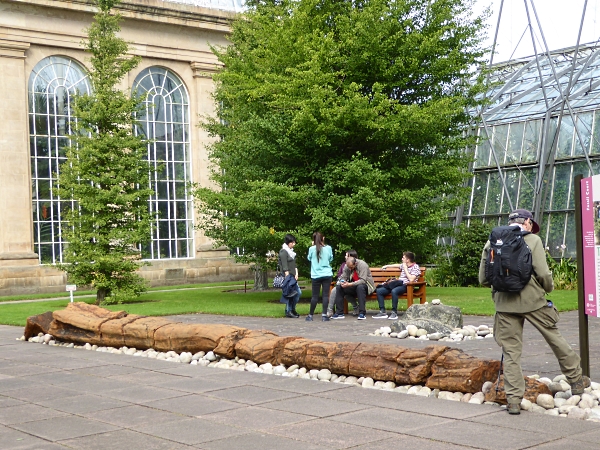 Outside the Glasshouses entrance is a variety of Siberian Elm Ulmus pumila var. pinnato-ramosa, described by Mitchell as “very rare”. It has a weeping habit and serrated leaves. 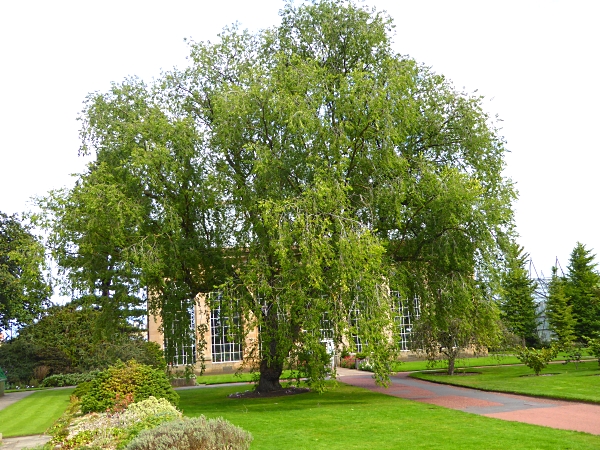 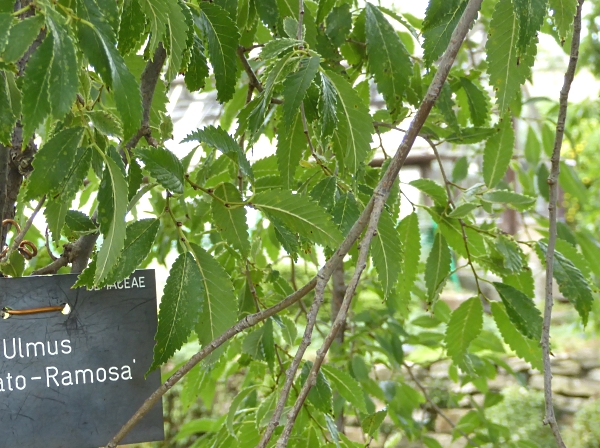 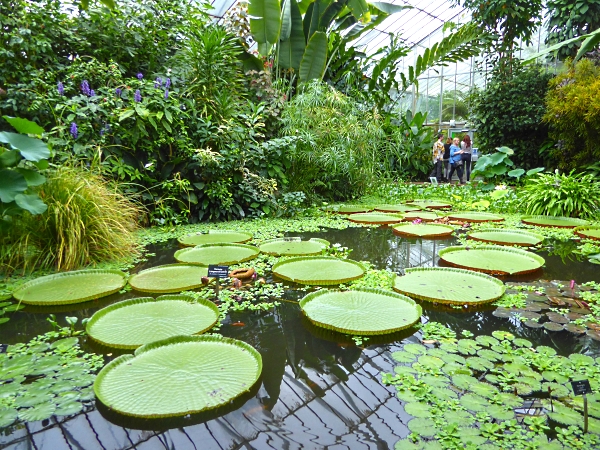 Another very rare tree was a Butternut Juglans cineria with pinnate leaves up to two feet (60 cm) long, looking too big for the tree. 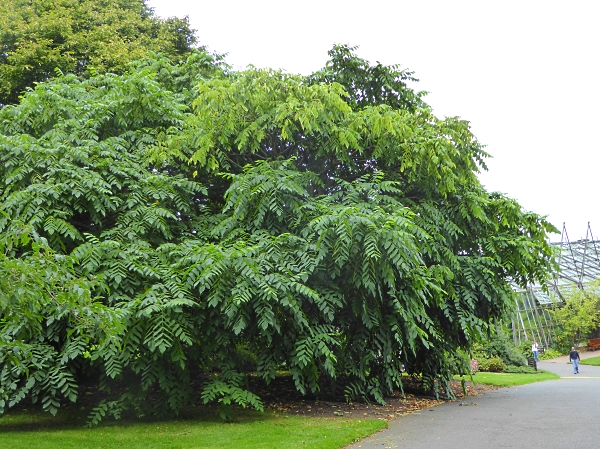 At MacRosty Park, Crieff, I was introduced to Douglas Firs and also to the Bhutan Pine Pinus wallichiana. It’s a five-needle pine, with very long needles, and I expect I will be able to identify it when I see it again. 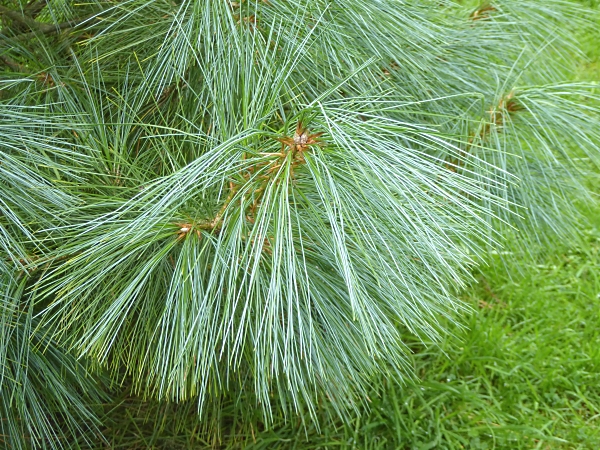 At Cluny House Gardens there is a huge Giant Redwood Sequoiadendron giganteum. The first seeds came to Britain in 1853 and this tree is thought to have been grown from that first batch. It’s 135 feet (41 meters) tall and still growing at about two feet a year. It’s the British girth champion at 11.3 meters (37 feet). 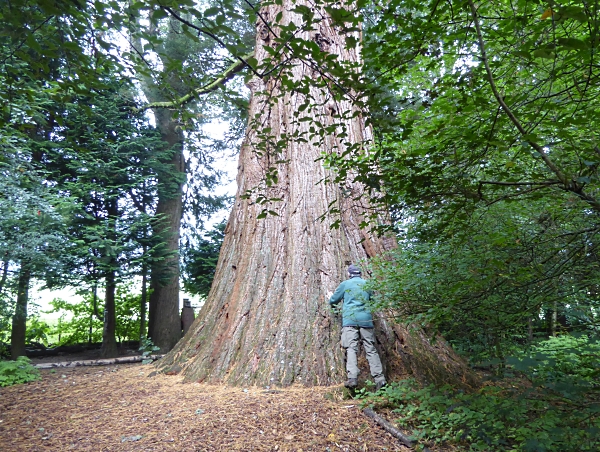 Red Squirrels are common here, and were scampering around the car park. They feed them regularly in bird-proof lidded feeders. 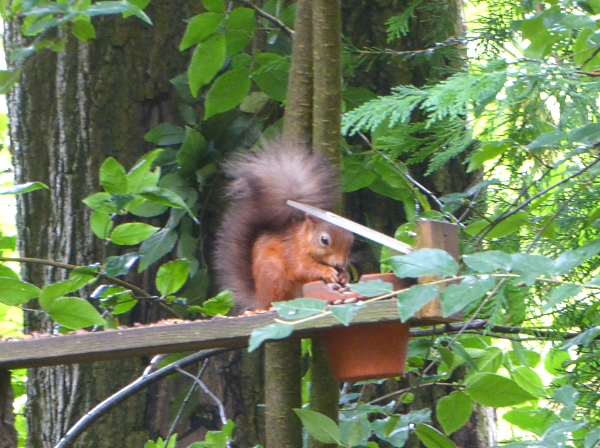 They have a very large and gnarled Antarctic Beech Nothofagus antarctica. There’s a very young one in the Dell at Port Sunlight, but this one looked like it might have been over a hundred years old. The species was first introduced to Britain in 1830 so is it one of the originals? Their leaflet didn’t say. Near the entrance I spotted a three-lobed maple with very big leaves. It was a Moosebark! Acer pensylvanicum. After having a possible Moosebark Maple pointed out at Calderstones a few weeks ago (I don’t think it was) I had looked up the snake-barked Maple group so I was primed when I saw the huge matching leaves. Nice bark, too. 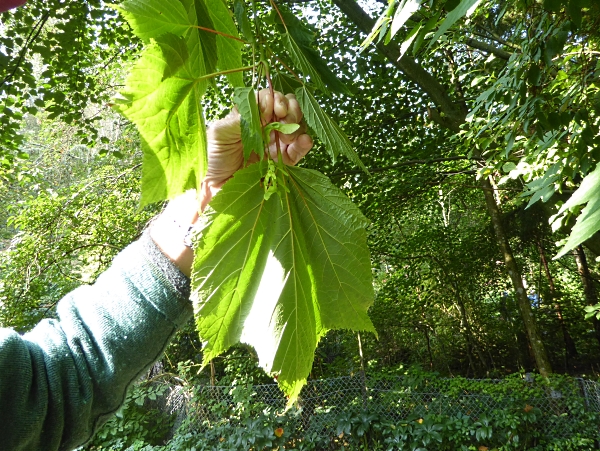 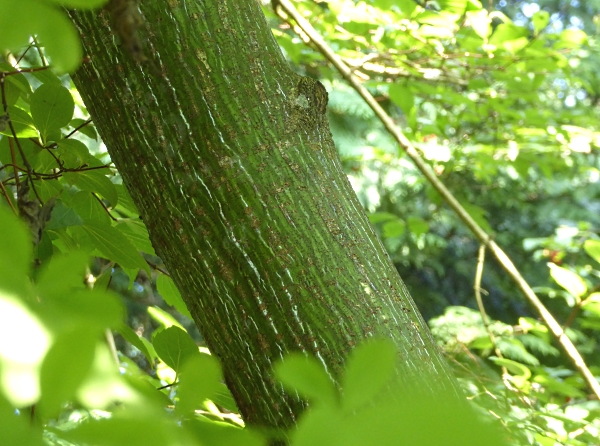 The Fortingall Yew is thought to be the oldest living thing in Britain and perhaps in Europe, at least 3000 years old, maybe 5000. In 1769 it was estimated to have had a girth of 56 feet (17m), but its subsequent fame ensured it was pilfered for souvenirs. Then some children set it on fire. Now there are only remnants behind a gated stone wall. All the separate trunks on the picture were once one tree and a ring of marker posts shows where the circumference used to be. Cuttings have been taken from this and other ancient Yews to make a hedge in the RBGE, to preserve genetic diversity. 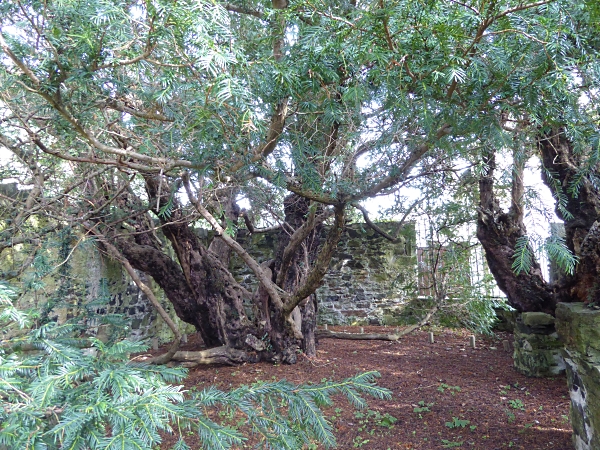 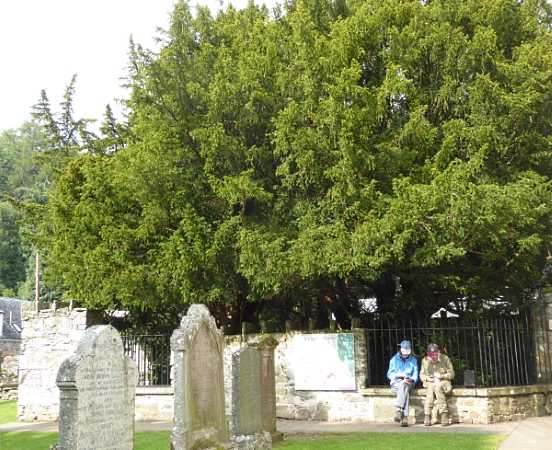 The Meikleour Beech Hedge is believed to have been planted in autumn 1745 and is now the world’s tallest hedge at an average of 100 feet. It is 580 yards long. We were able to get behind it, where it doesn’t look like a hedge at all, just the edge of a beech wood. 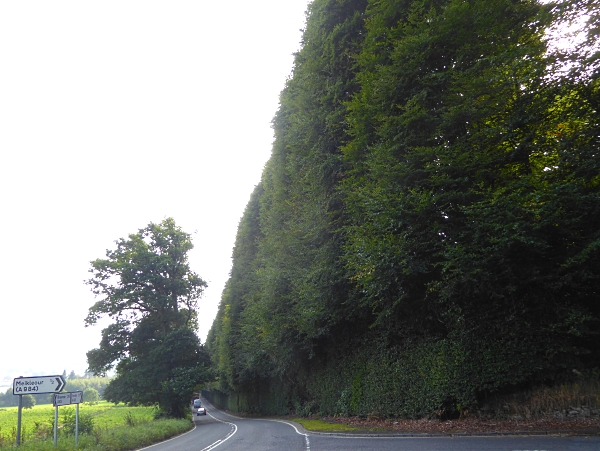 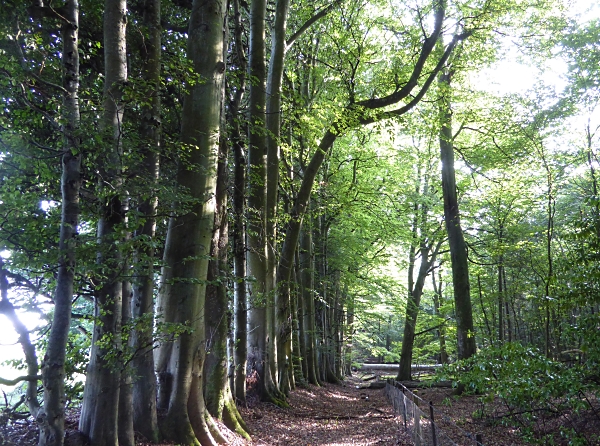 At Scone Palace they have the original Douglas Fir Pseudotsuga menziesii, grown from seed sent back by the plant-hunter David Douglas from the Columbia River in the Pacific Northwest of the USA in 1826. It’s now 190 years old and is one of the fifty Golden Jubilee Great British Trees, as is the Fortingall Yew. 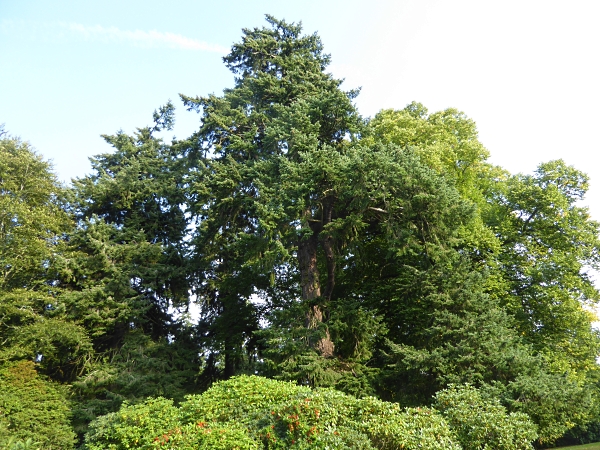 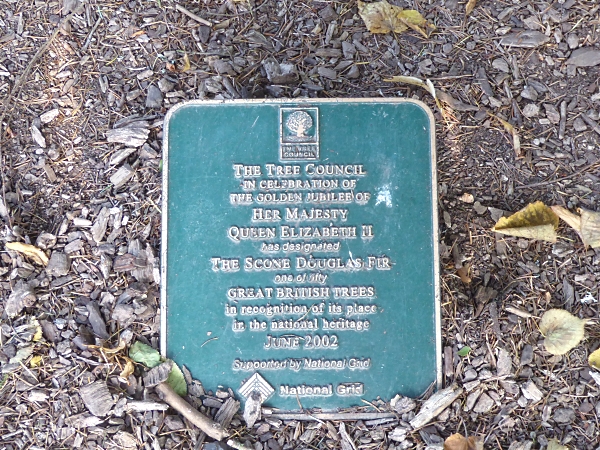 At Airthrey Castle, now part of Stirling University, there is a layering Giant Redwood. Its branches droop to the ground all around it and take root, making a ring of young trees. Some Yews are known to do this, but it’s rarer for Giant Redwoods. 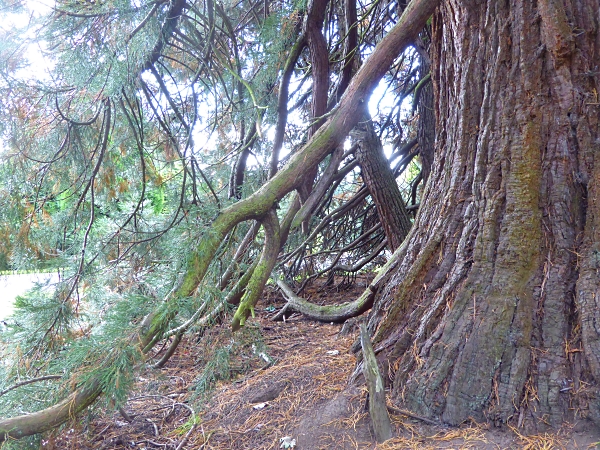 They also had a Père David’s Maple Acer davidii. It’s another in the snake-bark group, but has the most subtly (almost imperceptibly) three-lobed leaves of them all. 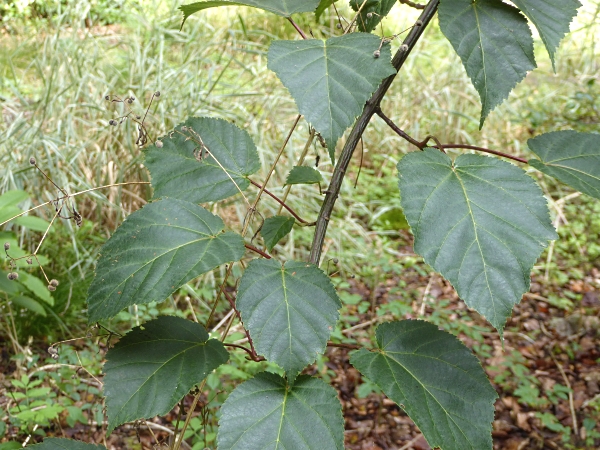 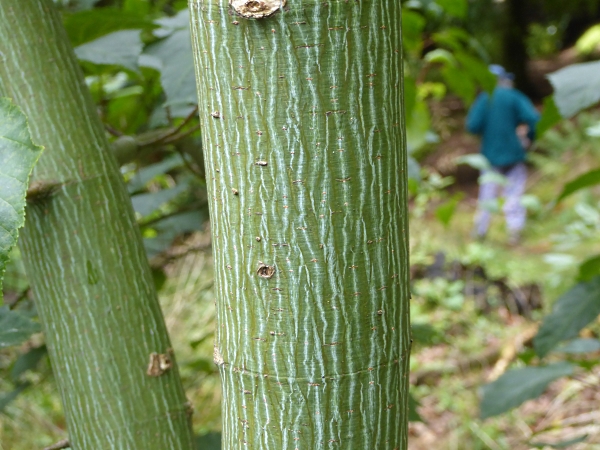 We ended the week in fine style at Argarty Red Kites, a feeding station and hide set up by a local farmer and his family. They were being given venison scraps the day I was there!  I reckon there are eleven Red Kites in this picture, although three are just dots in the sky. 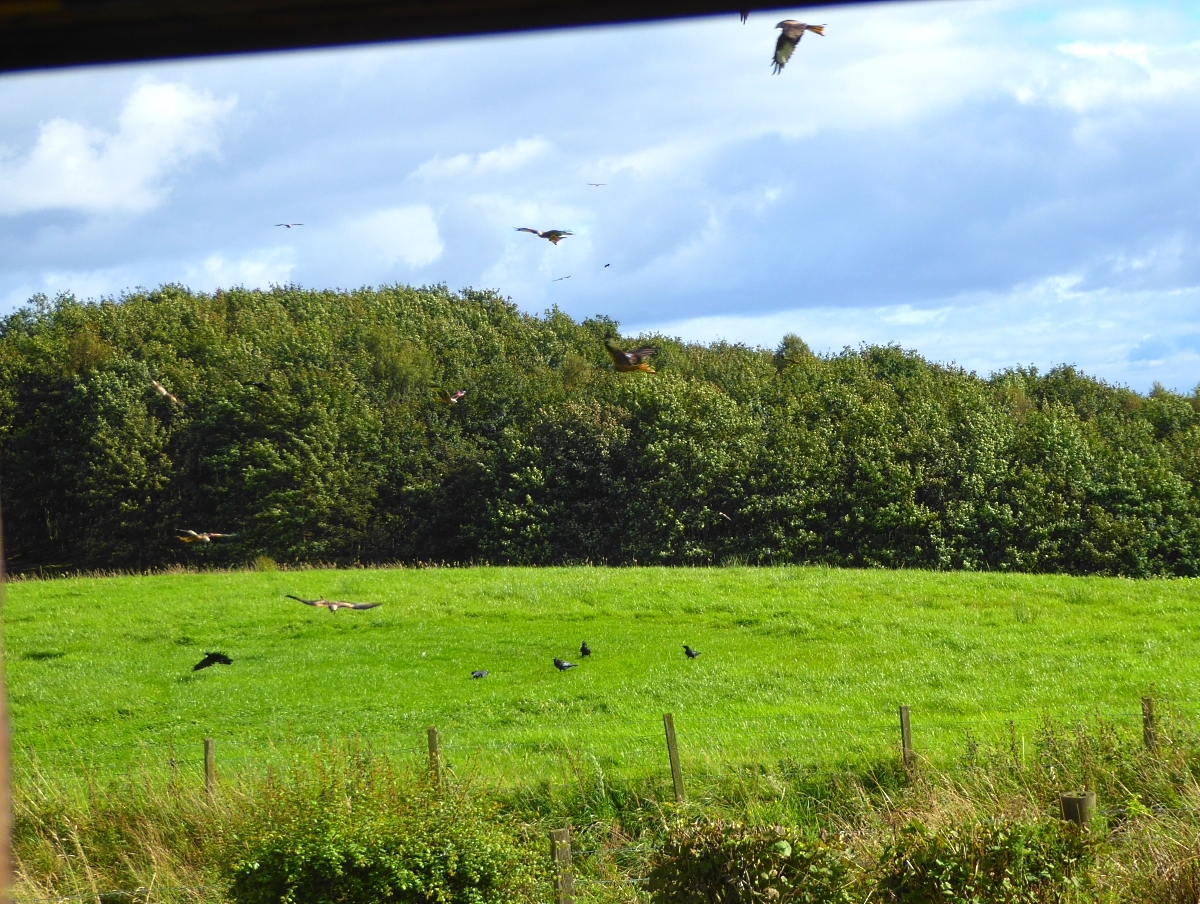