Posted on October 6, 2014 by Sabena Blackbird

23 members joined the MNA Coach Trip over to Old Moor RSPB Reserve in the Dearne Valley near Barnsley in North Yorkshire. We were slightly later in the year than our last visit in September 2011 but despite missing the passage Waders the sheer volume of Ducks and some fantastic views of Raptors led to an enjoyable day.

After a quick nose at the feeders beside the visitor centre – Robin, Blue and Great Tit, Chaffinch and later Willow Tit and Great-spotted Woodpecker seen by some, a large group of members headed to Bittern Hide overlooking the Mere for lunch. A Little Egret was seen stalking around and flying out at the back – later John Clegg & co viewed a Little Egret with a red darvic ring –too distant to read the number and also a Kingfisher. A pale looking Peregrine was being harassed by a couple of Carrion Crows. Ducks included Teal, Wigeon, Shoveler, Mallard, Tufted Duck, Gadwall, Coot with Greylag Goose, Canada Goose, eighteen Cormorant standing on an island and Black-headed and Lesser Black Backed Gulls. Better views of the Wildfowl was seen around at the Family Hide along with four Pochard and a pair of Little Grebe diving close in, plenty of Moorhens stalking around the islands, a Mute Swan and cygnet, a Grey Heron and a female Marsh Harrier gliding at the back of the reeds being chased on and off by half a dozen Magpies. A few passerines with small flocks of Goldfinch, Linnet, Starlings and the odd Reed Bunting. A Rabbit Oryctolagus cuniculus was sat on the grass just outside the hide meticulously cleaning its long ears and paws.

At the nearby Field Pool West Hide I’d only just sat down when a couple of Magpies flushed a Snipe which circled around eventually landing out of sight in a ditch. The sixty or so Wigeon standing on the edge of the channel then quickly took to the water ‘whistling’ as the pale coloured Peregrine put in another appearance circling above their heads then gliding over the field at times unusually almost stopping mid-flight and doing a quick hover like a Kestrel before gliding off again. I wandered along the Green Lane Trail adding Blackbird, Long-tailed Tit, Dunnock and Woodpigeon to my day’s tally. At Wader Scrape Hide a real Kestrel was showing much interest around island five at the north-east end of the Mere sitting on the island sign then dropping down on the coarse island vegetation before flying up and hovering. It didn’t catch any unsuspecting Vole though as it too flew off after being harassed by the ever present Magpies.

At Wrath Ings Hide I was counting yet more Wigeon, Shoveler and Gadwall when a flock of thirty or so Golden Plover flew over, they circled a few times but didn’t land. They were soon followed by sixty Lapwing that broke off into two smaller groups and had only just put their feet to the ground when they were back in the air – the pale coloured Peregrine gliding by again! 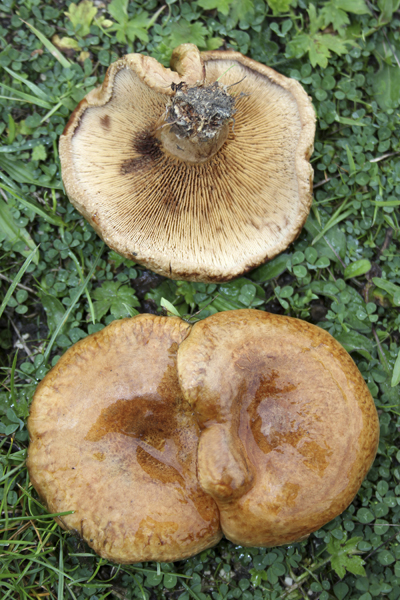 Only a couple of Fungi species were noted with eight Brown Rollrim Paxillus involutus growing on a patch of short grass close to the Mere and King Alfred’s Cakes Daldinia concentrica growing on the base of one of the wildlife themed wood carvings that were scattered around the reserve and had begun to decay. 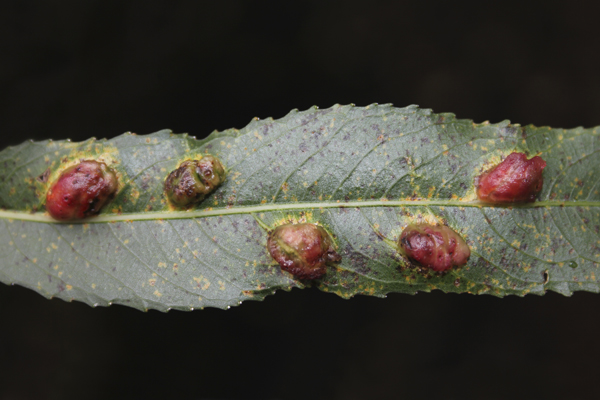 A number of Gall species with Red Galls on Crack Willow Salix fragilis leaves caused by the Sawfly Pontania proxima and a number of Robin’s Pincushion Galls a.k.a. Bedeguar Gall caused by a Gall Wasp Diplolepis rosae which lays its eggs in either the leaves or stem of the Dog Rose. They were unfortunately past their best unlike a fine example we saw on the MNA walk around Wiggs Island NR in September. However, one of the Galls did have the added bonus of a Hairy Shieldbug  a.k.a. Sloe Bug Dolycoris baccarum sat on it. 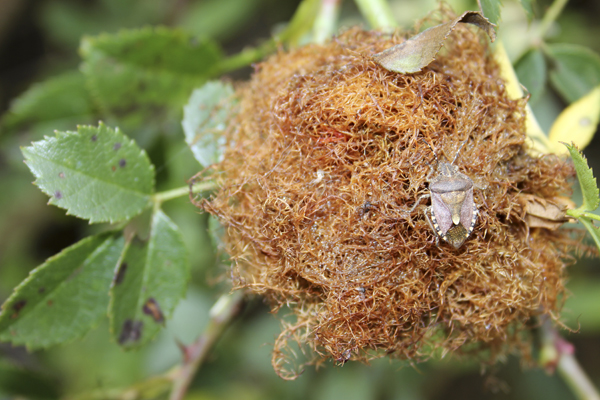 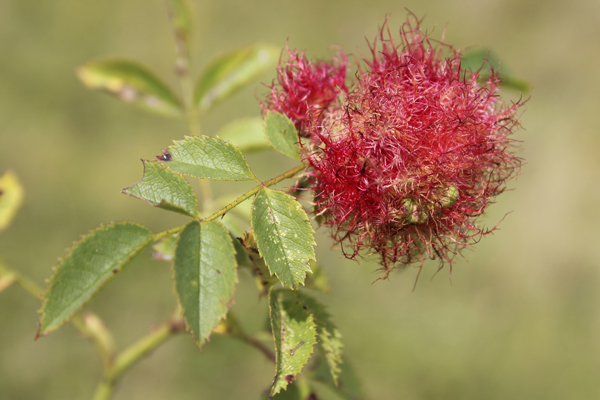 ChrisB pointed out some Galls on the Sloe Prunus spinosa bushes called ‘pocket plums’ caused by the fungus Taphrina pruni that results in an elongated and flattened gall, devoid of a stone. The leaves of the Sloes were rolled up tightly perpendicular to their mid-rib caused by the Leaf-curling Plum Aphid Brachycaudus helichrysi. 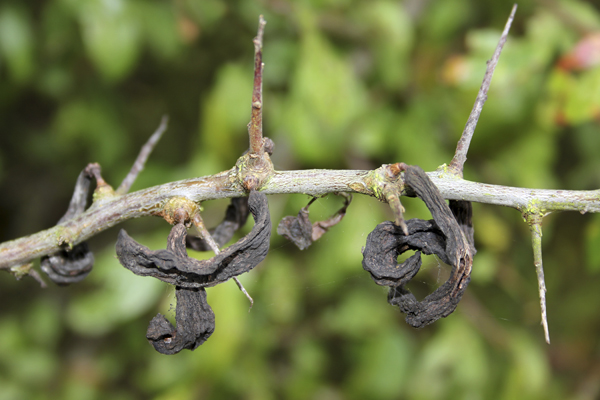 Dull overcast cold conditions kept the Insects at bay but there were numerous Alder Leaf Beetles Agelastica alni making short work munching through the leaves and when the sun put in a brief appearance when we were about to depart a Migrant Hawker Aeshna mixta was patrolling a trail. 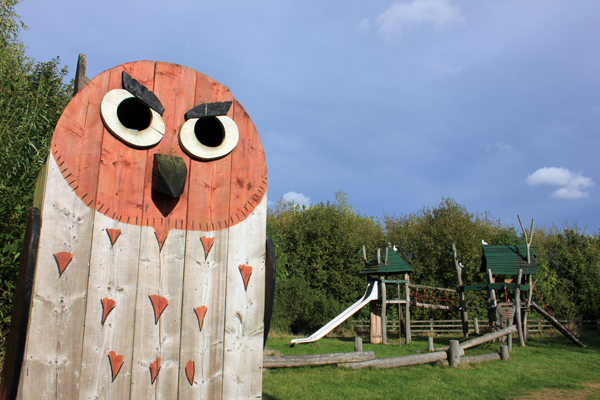 I think I may have to put in a submission to the British Birds Rarities Committee  – I came across this magnificent Owl in the children’s adventure playground 🙂 After resisting the urge to buy more books in the Reserve shop I headed out where a Red Admiral Vanessa atalanta was flitting around the masses of Ivy Hedera helix that completely covered the gable end of the stone centre. ChrisB had found some Grapes growing in a small Herb Garden – a few of the vine leaves giving wonderful Autumn colours. 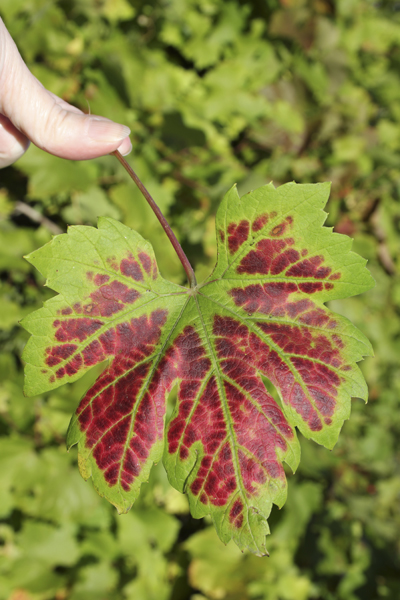 As a finale John Clegg shouted out ‘Red Deer herd!’ standing in a nearby field when we had just re-joined the M6 for our return journey.