We entered at the Crompton’s Lane / Menlove Avenue side, and explored the field on the western side of the car park. It is full of rare trees, which aren’t on any tree lists I can get my hands on!  I know there is a Foxglove tree and a Keaki there, and we admired an Alder with a magnificent gnarly trunk, a group of Bhutan Pines and one of the many unknowns which still bore most of its leaves, although they were yellow, and which had little brown berries with one hard seed close under the skin. It must have been some unusual kind of Cherry, although the bark was patchy and flaky, with no horizontal rows of lenticels (which is what most Cherry bark is like). 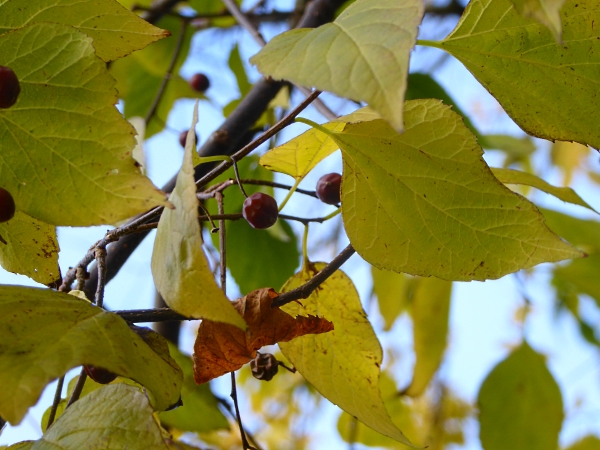 We spotted the remains of a Sparrowhawk kill, and later saw the predator itself soaring overhead. A Yew tree at the back of the ice cream parlour was being patronised by a Blackbird, who was tucking into the plentiful red berries. 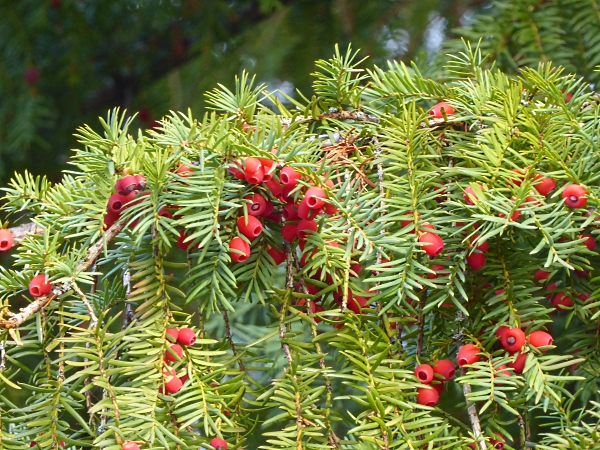 The work on the old Manor House continues, and it is wrapped up like an artwork by Christo. Around the back, by the old toilet block, is a rare tree called a Golden Rain Tree or Pride of India. Until recently it was badly hemmed-in by dark Yews and had bolted for the light. To our delight, they seem to have removed the shading trees as part of the works, although there is nothing to see yet. We aren’t even sure which one it is now, but it’s probably the three-stemmed one just in front of that Birch with the white patchy bark. We shall see next spring! 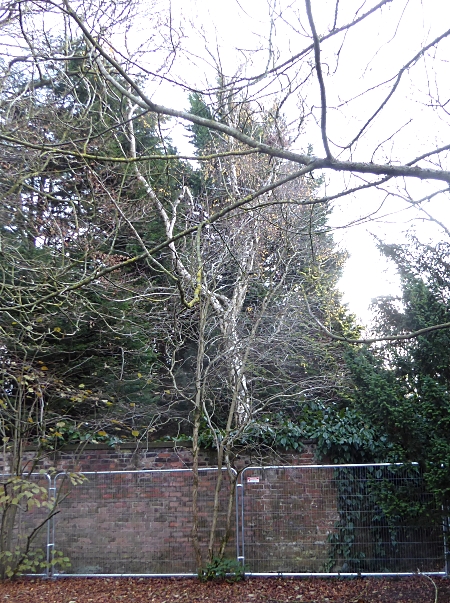 There’s a Handkerchief Tree Davidia involucra by the path to the Old English garden. There were some seeds underfoot and the large leaves have turned autumnal in some interesting waves of colour. 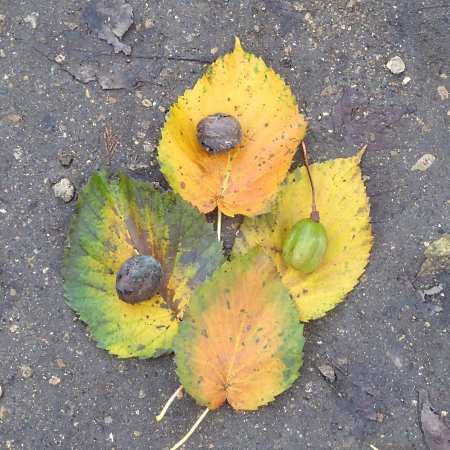 Some of the very dark crimson leaves of the Japanese Maples have a surprising autumn habit. They shrivel up like crinkled tissue paper, starting while they are still on the tree. 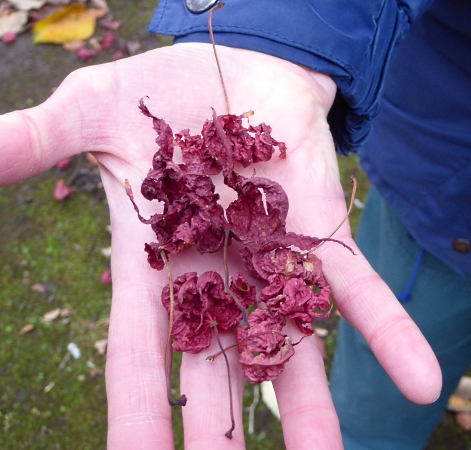 Lunch was by the pond in Old English garden. We put out seed and mealworms and were rewarded with lots of little birds, Dunnocks, Blue Tits and a Chaffinch, and also two fearless Robins. 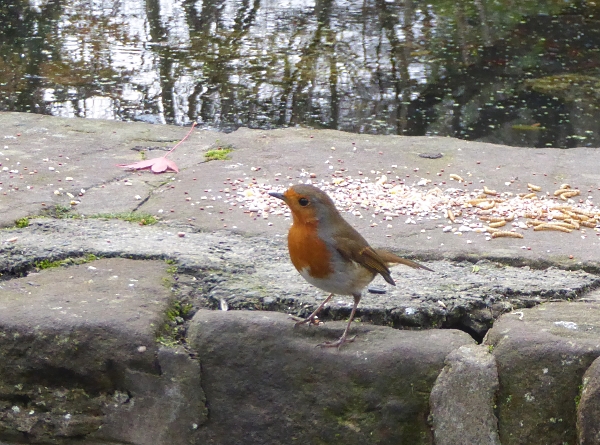 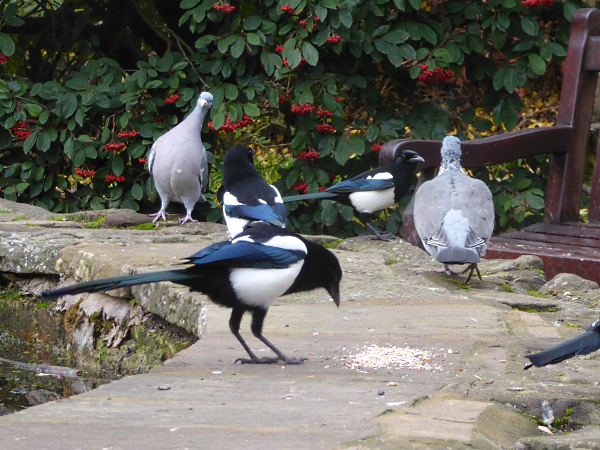 In the shrubbery on the edge of the path opposite to where the old café used to be there is a Snowdrop or Silverbell Tree Halesia monticola with its four-winged seeds hanging in rows from the twigs. Below it is the common Snowberry bush, one of the planters’ little jokes. Over by the Lucombe Oak there are two Swamp Cypress with their wonderful rusty-red needles falling in a carpet all around them, and a Douglas Fir whose cones have little bracts sticking out under every scale, like forked tongues. 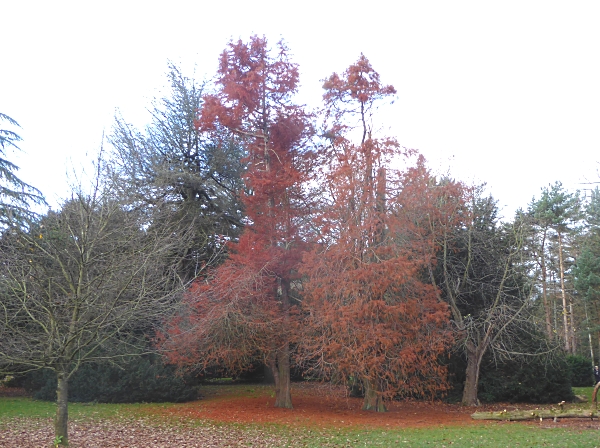 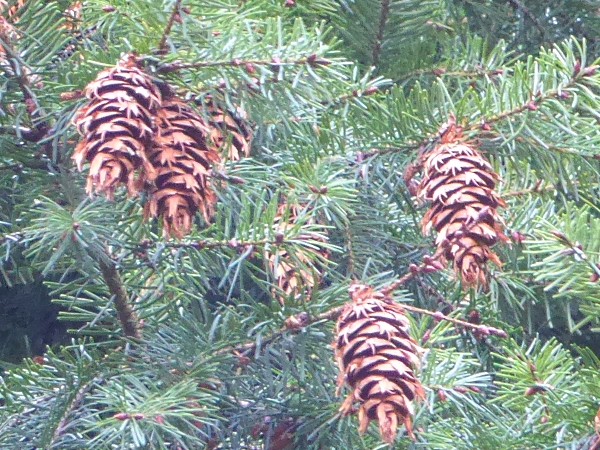 A pair of trees in that same area caught our attention. They had huge oval leaves like Magnolia leaves, but the fruits were like little pears. Margaret broke open a fruit, and although it is hard to see on the photo, she said it seemed like an apple core inside. What on earth were they? There are no pears or apples like that in my copy of Mitchell. I have Colin Twist’s survey of the unusual trees in that area, but none of the names seem to refer to these trees. [Added later – thanks to the Fb group ‘British and Irish Trees’. It is very probably Tibetan Whitebeam ‘John Mitchell’, Sorbus thibetica] 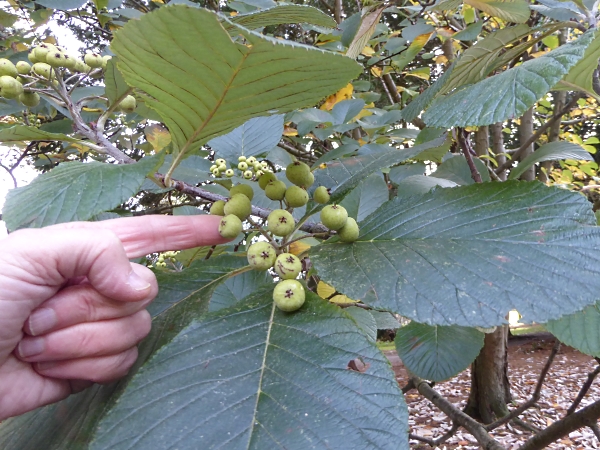 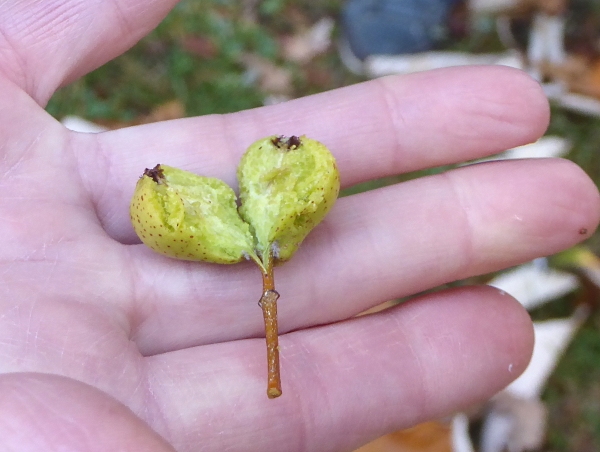 The suburban gardens are starting to show winter-flowering shrubs and trees like Mahonia, the orange-on-bottle green Darwin’s barberry Berberis darwinii (named after the famous Charles), winter-flowering Jasmine Jasminum nudiflorum with its delicate yellow flowers and the pink and white tube-flowers of Viburnum bodnantense. I even have some roses still blooming! 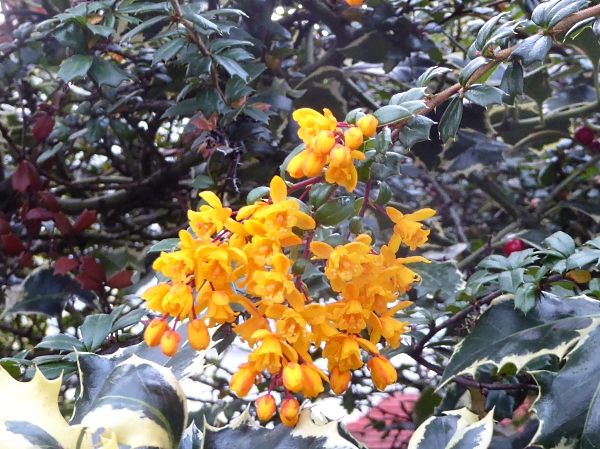 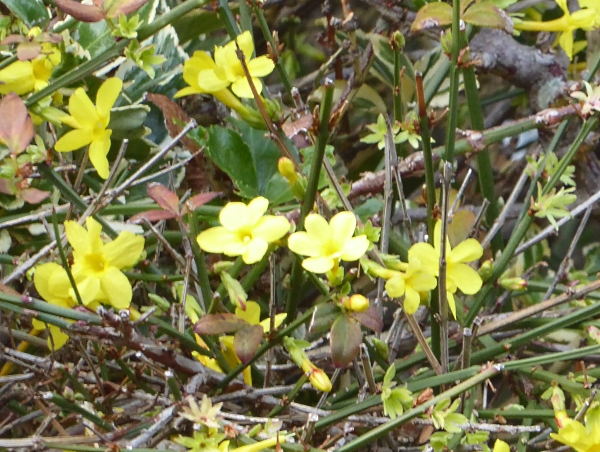 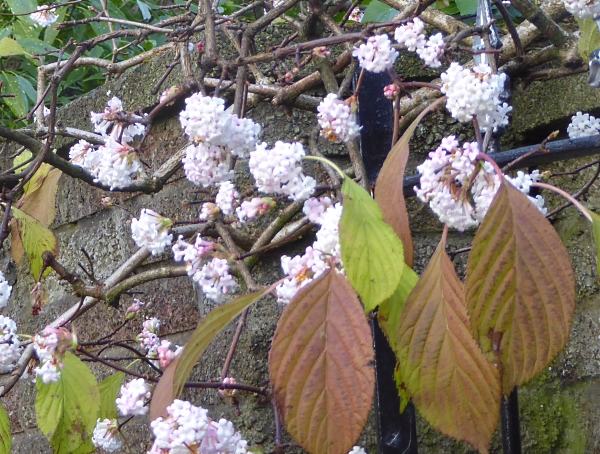