Hesketh Park in Southport is another one of Edward Kemp’s designs, and it was opened in 1868. It features a rather splendid lake and several specialist areas – a Rose Garden, a Sensory Garden and an area of specimen trees. 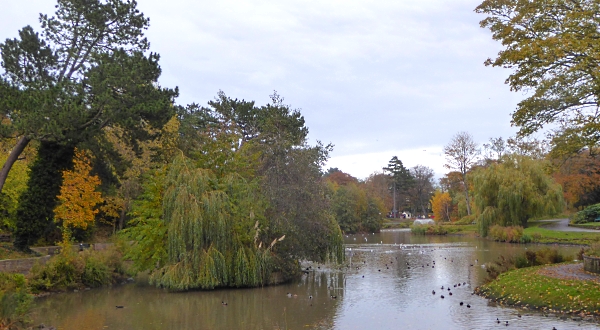 We didn’t see any small birds all day, but may have heard a Robin singing from the deep shade of some  evergreens. However, the lake had the expected Mallards, Coots and Moorhen, together with Black-headed Gulls and a dozen or so Tufted Duck. 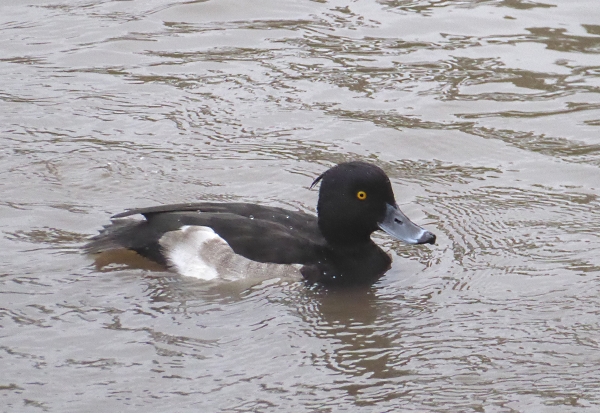 A family was introducing their youngest to the pleasures of “feeding the ducks”, but with stale bread, regrettably. 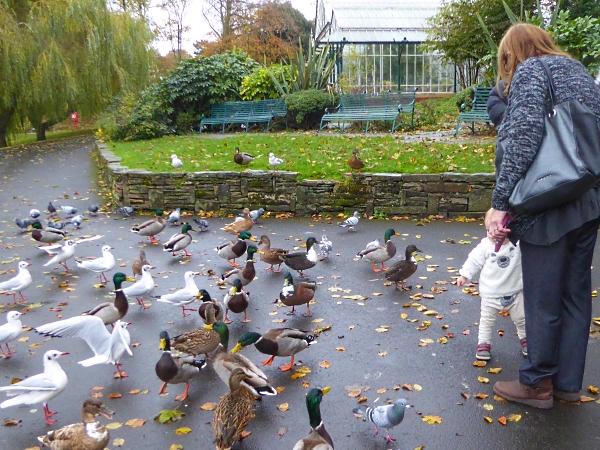 The Rose Garden will be beautiful in summer, with a sign naming all the rose varieties on display. There were still a few of them in bloom, including this lovely single-flowered one. 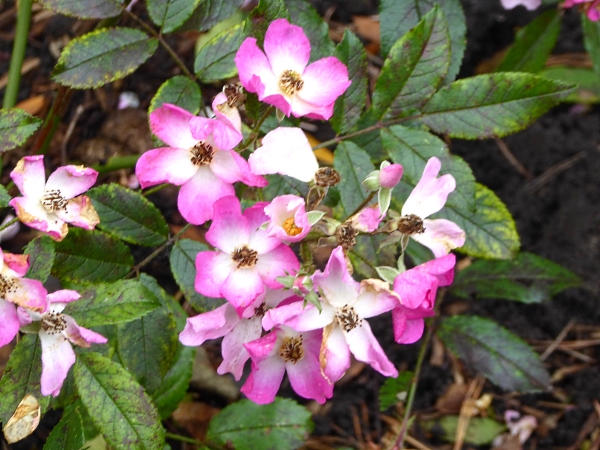 There are two Weeping Ashes placed symmetrically between the Rose beds, and because most of the foliage has dropped you can see the place where the drooping and contorted “weeping” branches were grafted to the straight trunk. 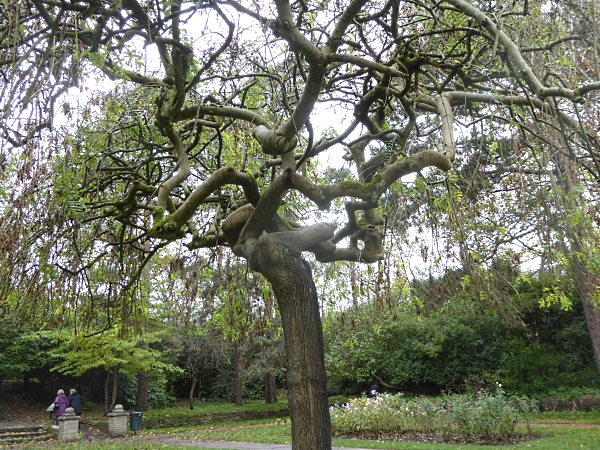 In the Specimen Garden is a tall Dawn Redwood Metasequoia glyptostroboides, with lovely rusty-red autumn foliage. 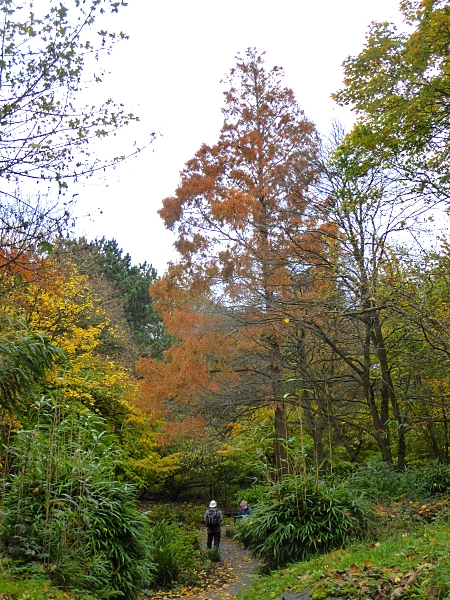 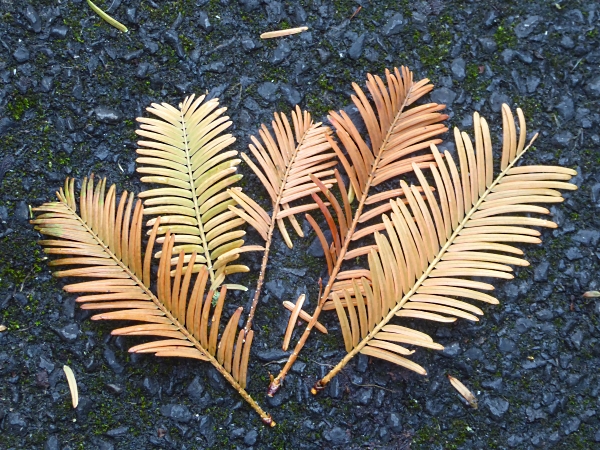 There were also two Persian Ironwoods, Parrotia persica, known for their autumn colour. The leaves still on the trees were green and yellow but the ones with the tinges of crimson had already fallen. 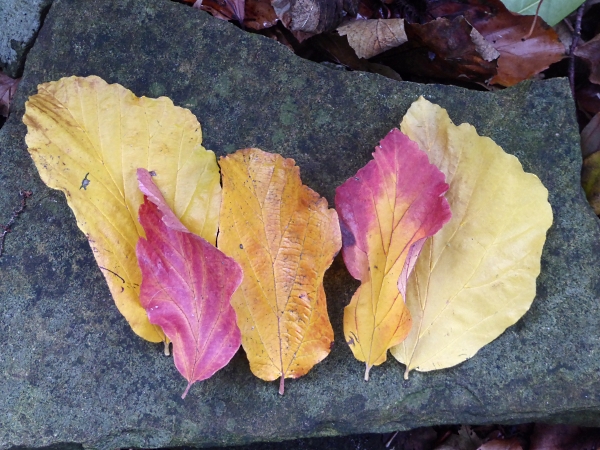 There are three Japanese Pagoda trees Styphnolobium japonicum in the park. There is a dead one at a path junction, a big labelled one near a gazebo, and very neat small one by the floral clock. 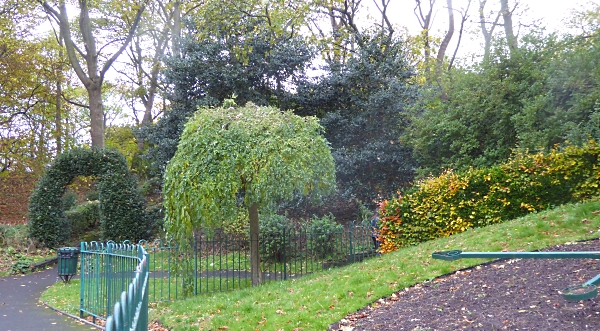 We have never been to the area where the Stansfield Rock Garden used to be, but wandered that way this time. We chanced upon a row of three mature Cedars on the slope below the absent rockery. The one on the right was definitely a Blue Atlas Cedar Cedrus atlantica ‘Glauca’, the middle one with spring-green foliage and drooping branch-tips was definitely a Deodar Cedrus deodara but what was the other one on the left?  Could it be a Cedar of Lebanon Cedrus libani?  If I had been planting three Cedars, that’s what I would have planted there!  The foliage was right, with short even-sized needles, but counting against that ID was that it was slightly blueish green, and the branches weren’t noticeably level. It didn’t have multiple vertical trunks either. If it wasn’t a Lebanon it must have been the rarer green (not blue) Atlas Cedar, but my money is on a Cedar of Lebanon, just for the symmetry of the group. 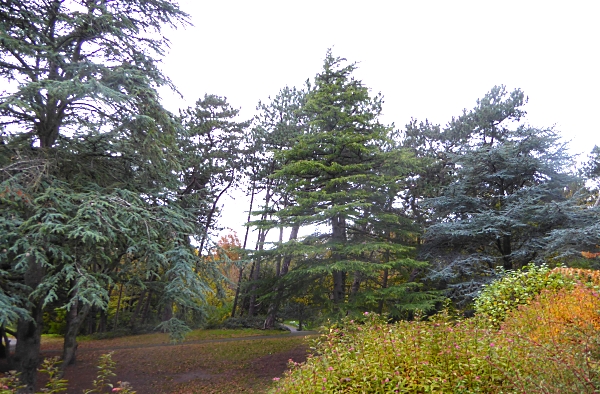 Drizzly rain started so we hopped it back to the bus. There are still a lot of leaves on the trees.  Limes and Norway Maples are yellow, Planes are still mostly green but the stars of this autumn’s show are the Cherry trees, bearing brilliant red-gold leaves. Strangely, we saw none like that inside the park, just the garden and street trees noted from the bus. Why? Is there a different micro-climate inside the park? 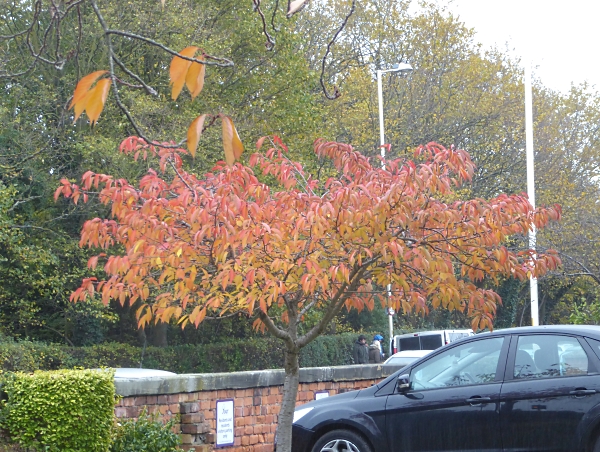 Before I met the others in the morning I photographed the five Ginkgoes in Williamson Square. One is leafless, three have orange leaves and one is still green. They were all planted together, presumably from the same batch, but now they are showing great variation in height and foliage. 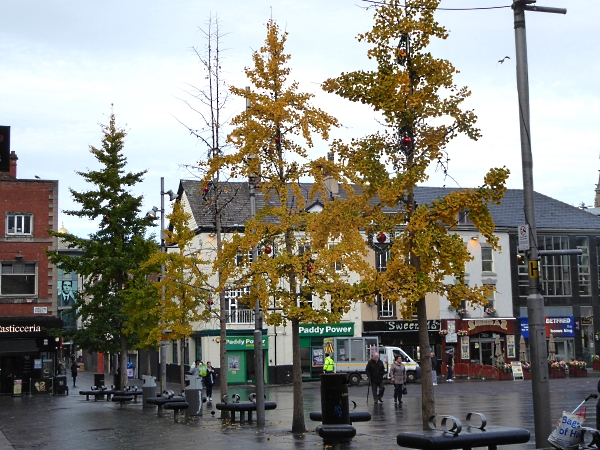