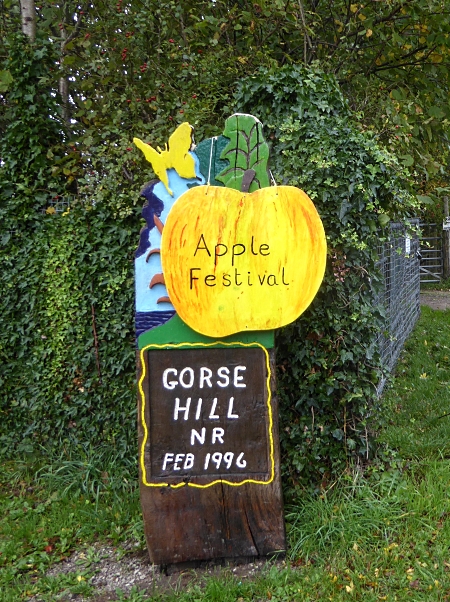 From Aughton Park station we turned right up Long Lane towards Aughton church. The gardens along here have some interesting plants including this yellow Buddleia, which was still flowering beautifully, although we saw no insects on it. 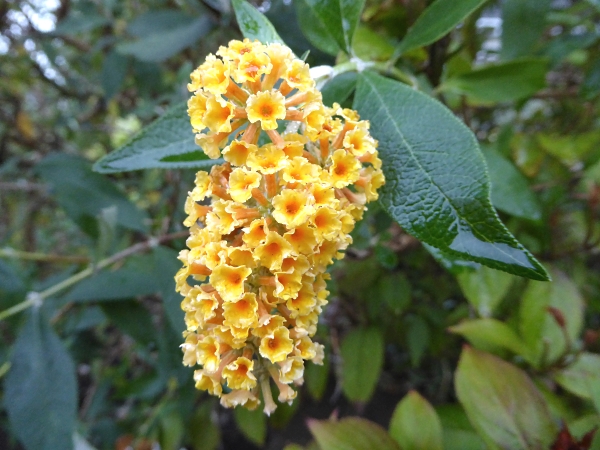 Then across Holborn Hill, the A59, up through the fields to the reservoir, then left to Gorse Hill reserve. Buttercup and Yarrow were still flowering by the wayside and there were Black-headed Gulls on the fresh ploughsoil, Starlings on Aughton church tower and many skeins of yapping Pink-footed Geese crossing the sky above. The house on Holly Lane that had one life-size Pangea metal sculpture of a giraffe in its garden now has two of them. They’re breeding! 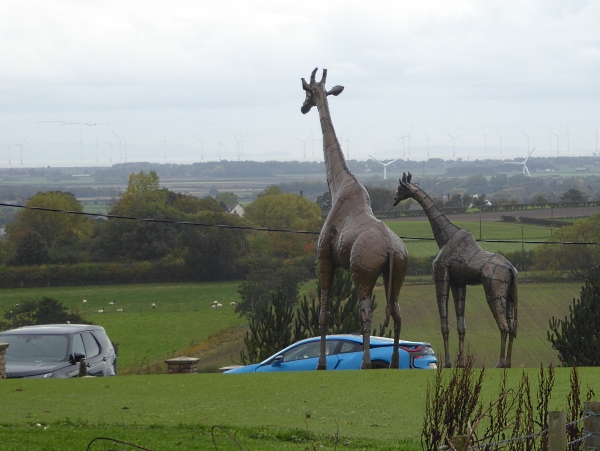 We took the orchard tour to see their 43 heritage varieties of apple trees. Most of the fruit has been harvested, but some is still on the tree, including the late variety “Sunset”. 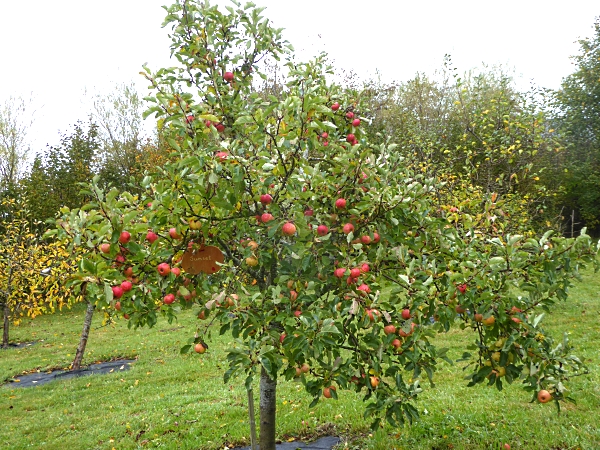 We walked through Cabin Wood, where they have old flagstones laid down as Newt shelters. Their “small mammal homes” are made from plastic tubes and hay, covered with carpet tiles then a pile of branches. We were also charmed by this splendid bug hotel which, according to the sign, includes a pair of the reserve manager’s old trainers, wellies full of old socks and a discarded upturned kettle. 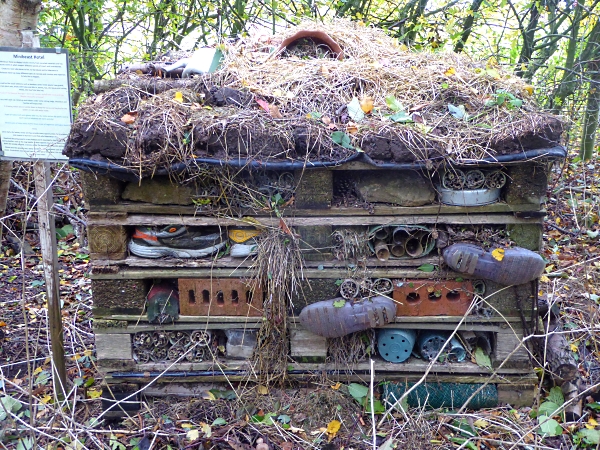 After lunch overlooking Seldom’s Pond we sat in the bird hide for a while, but nothing came to the bird table with a tempting array of seed. Outside we picked up this huge fallen Horse Chestnut leaf, the biggest we’ve ever seen. 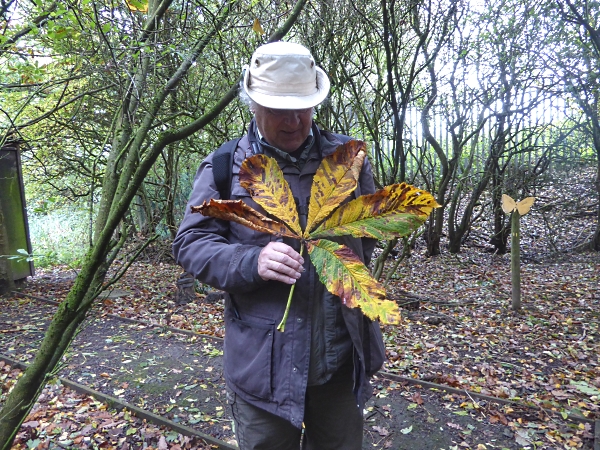 Back in the barns, the apple sale was ticking along successfully, and I got (clockwise from top) a Ribston Pippin, a Yorkshire Aromatic, a Sunset and a Galloway Pippin. 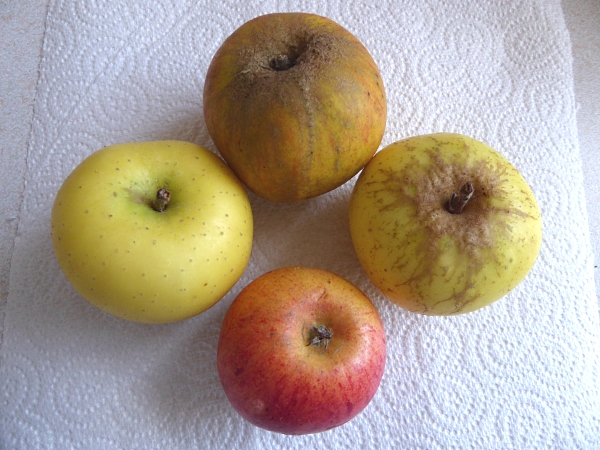 Then we watched the windfall apples being turned into fresh juice. (£2 for 500ml). They are loaded into a hopper and chopped, then emerge sloppily into a blue bucket. The pulp is then wrapped into sacking parcels and loaded into the press. The juice is bottled by hand, and the remaining pressed cake is saved for animal feed. Horses are very fond of it, apparently. 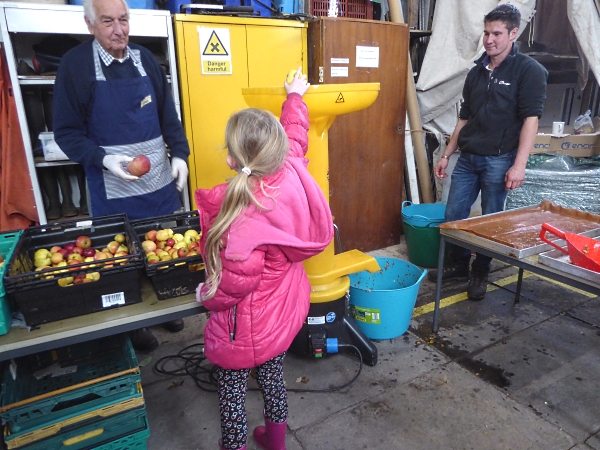 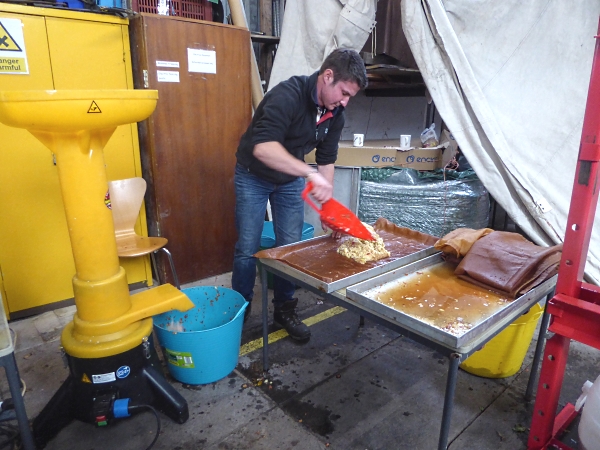 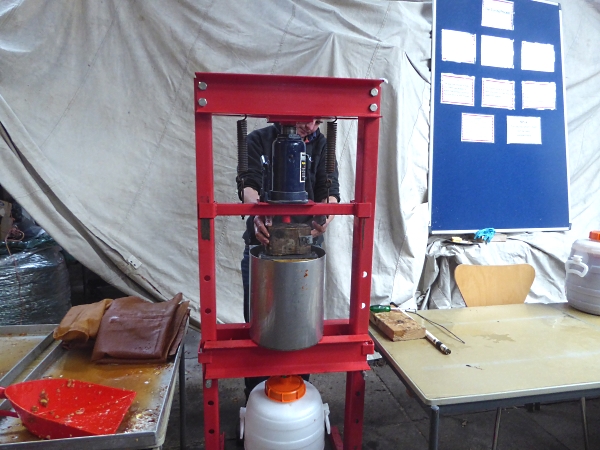 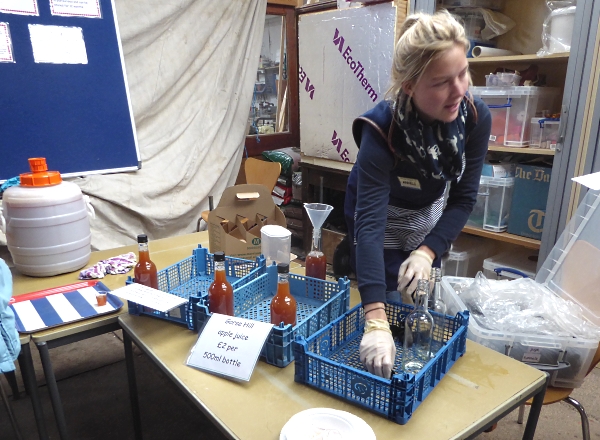 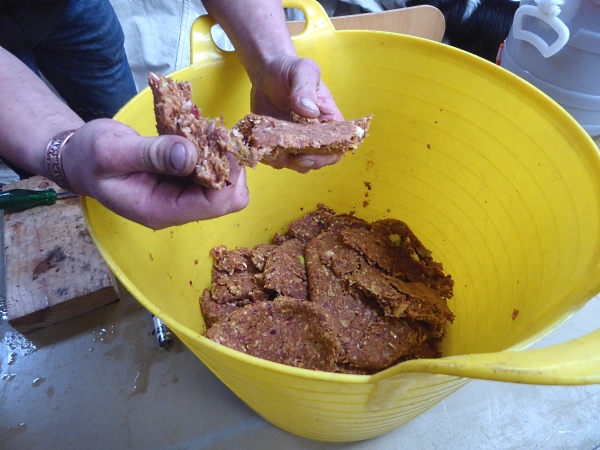 Then we walked out onto the open ridge. Gorse Hill is a mere 81 meters above sea level, but on the flat Lancashire Plain that makes for very long views. Through a gap in the hedge we could see Blackpool Tower on the right and the hair-raising funfair ride called The Big One on the left. 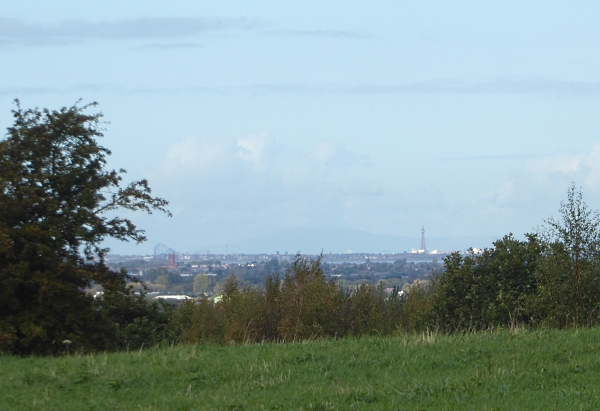 A Jay flew by and a Robin perched on a gate.  We wandered about a bit, looking for a Yellowhammer, but no luck today. We returned around the back of the reservoir and emerged to the lovely view over Ormskirk church, with its rare “double” of a tower and a steeple. 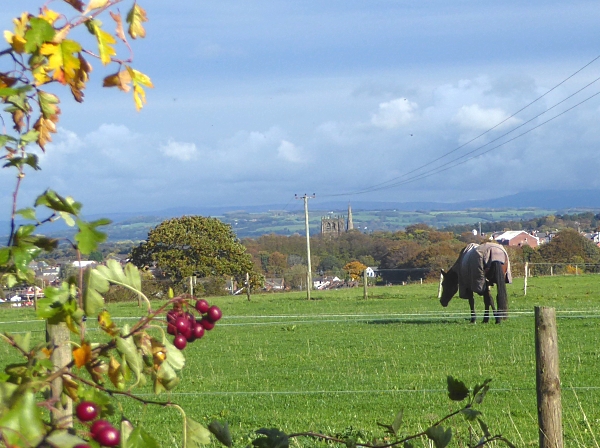 Public transport details: The Ormskirk train from Central at 10.17, arriving Aughton Park at 10.45. Returned from Aughton Park Station on the 15.40 train, due in Liverpool at 16.10.